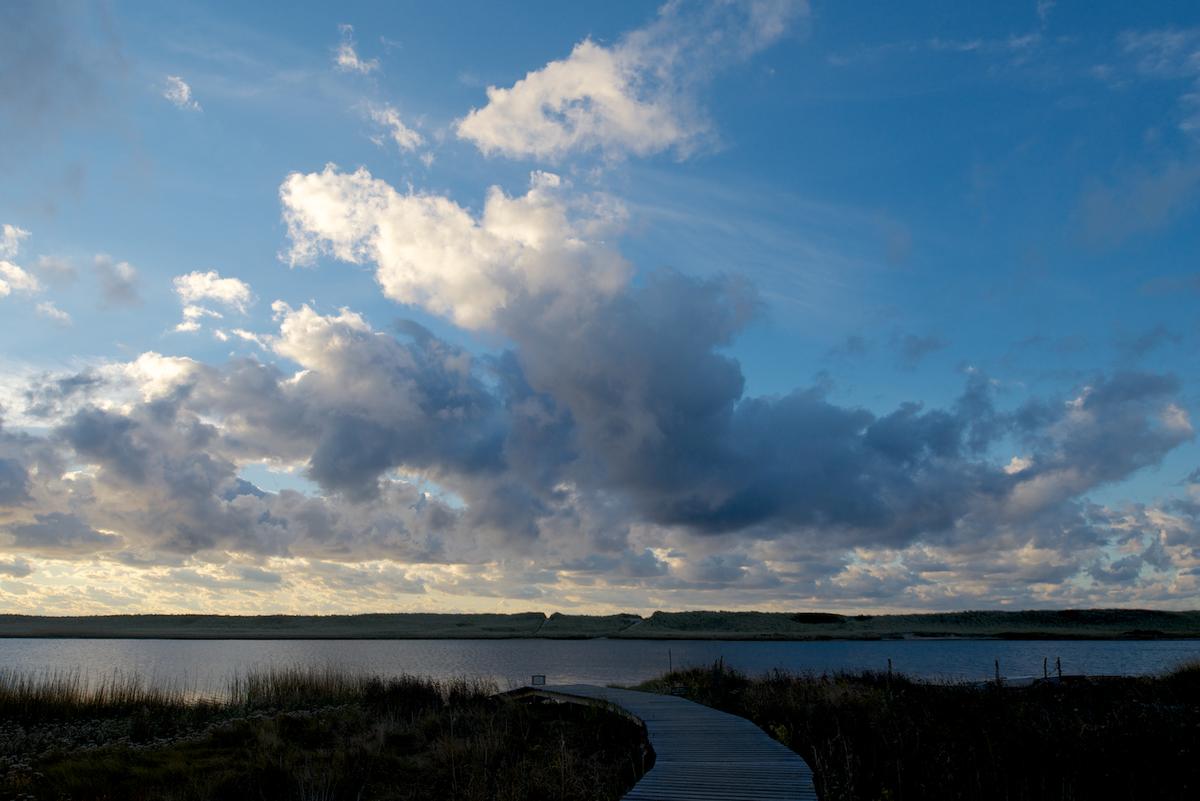 What if you threw out the rules? What if you let the mandate go that says your photographs have to look "realistic"? What if you defy the requirement that your imagery has to look like it did when you were out there standing in front of the subject with a camera? What if you didn't worry about the sky being a neutral gray on a cloudy day or the right shade of blue on a sunny day? What if you chose to saturate the colors more, alter the palette or pump the contrast?

Why do you suppose this is a concern? Why are we afraid to break from reality in our work? We know photography lies, why do we work so hard to make it look "real"? I know one reason and that is that we've all seen work that is over saturated, over sharpened, over processed and over cooked and we know that it looks very very bad. In fact, this is one way someone like me decides if someone can print well or not.

This analogy might help: Back when I was teaching darkroom-based black and white photography, a standard routine for me was to stand in white light outside the darkroom, have intro students come out with their just processed wet prints in a tray to look so I could look at them. Invariably, students would  print with too much contrast. My job was to say, "Print it flatter", making them go back in, change the variable contrast filter to a lower number in the enlarger, put another piece of paper in the easel, expose the print to light and process it through the chemistry, then bring the new print out for me to see and usually say, again, "Print it flatter." Intro students care about impact and contrastier can look sharper too. Subtlety? Not so much. My job was to show them that the real guts and substance of a photograph exist in the mid tones and that printing with too much contrast usually resulted in eliminating detail and information contained in the negative. I used to tell students not to "print with a sledgehammer." You get my point.

So, to bring this up to the present, this is our holdover from earlier times or perhaps our albatross. Traditionally, good printers do not draw attention to the print itself but to the image contained within it, hence the "realistic" overriding rule. I believe this to be fundamentally correct in documentary and photojournalistic photography, where verisimilitude is essential for believability and accuracy and where the person taking the picture is secondary to the event, but in art? Why would art require accuracy? It is art.

Now, I am not crazy and I am not going to go into too much "warm and fuzzy" here  in a blog that goes out to the public but I hope you get my point. Worried about what others will think or feel strongly about an image and the color palette it exists in? Know you are right or are you concerned that you will be invalidated due to how much or what hue you dial in for your prints? Yes, I am an advocate of informed decisions and, if you are just starting out, by all means drive your pictures more to the color accuracy end of the spectrum but remember, you are making art, right?  Drive it any way you want. It's your art.

Let's see what you think: 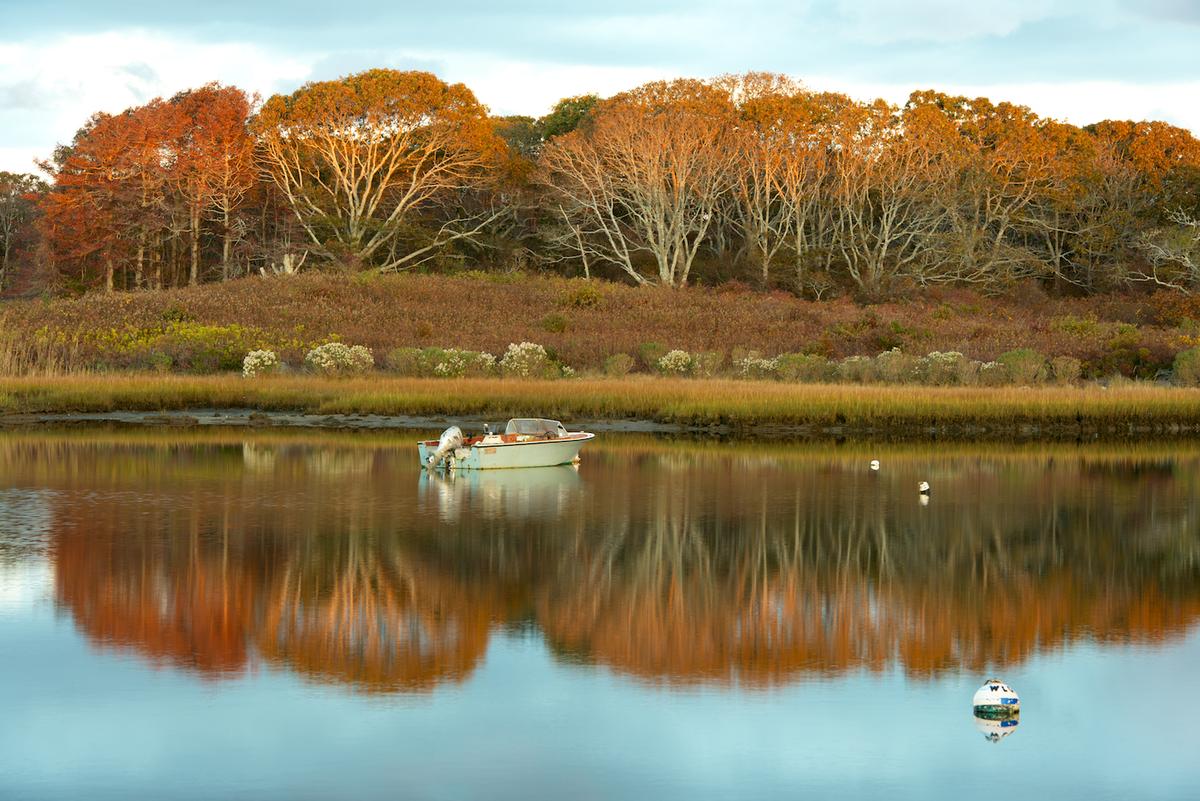 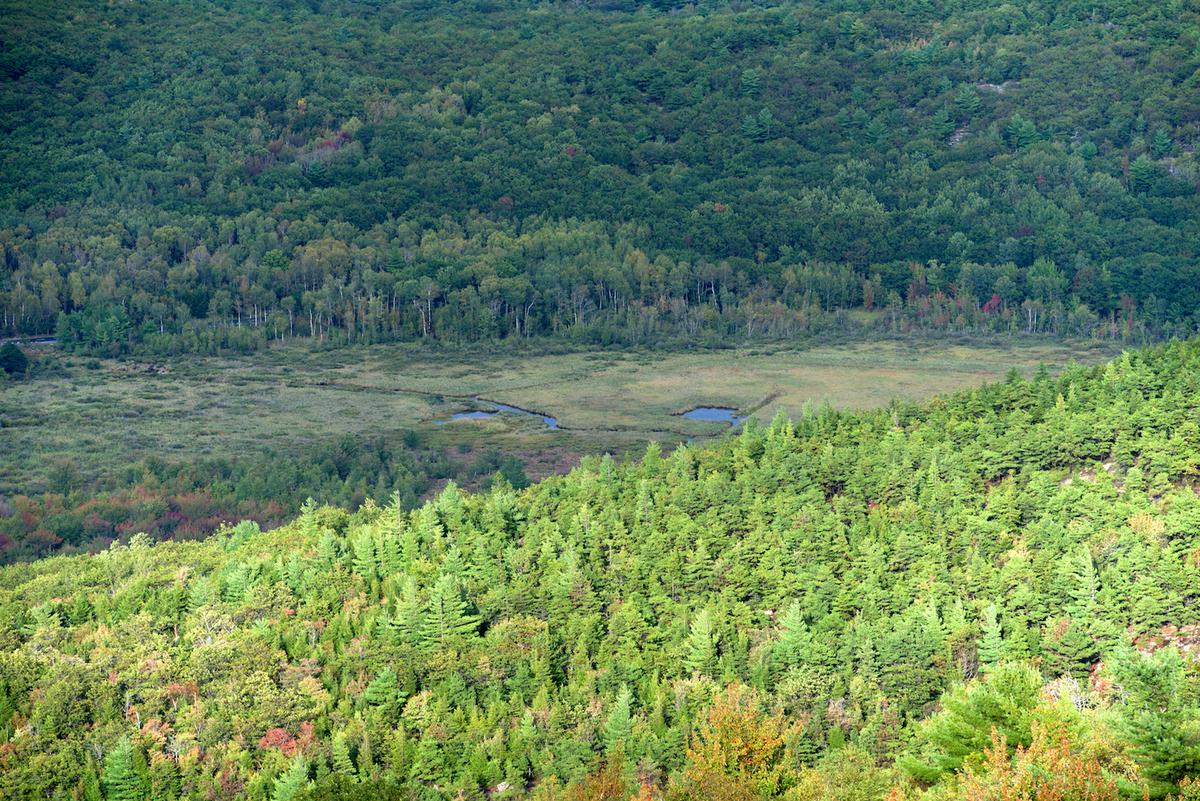 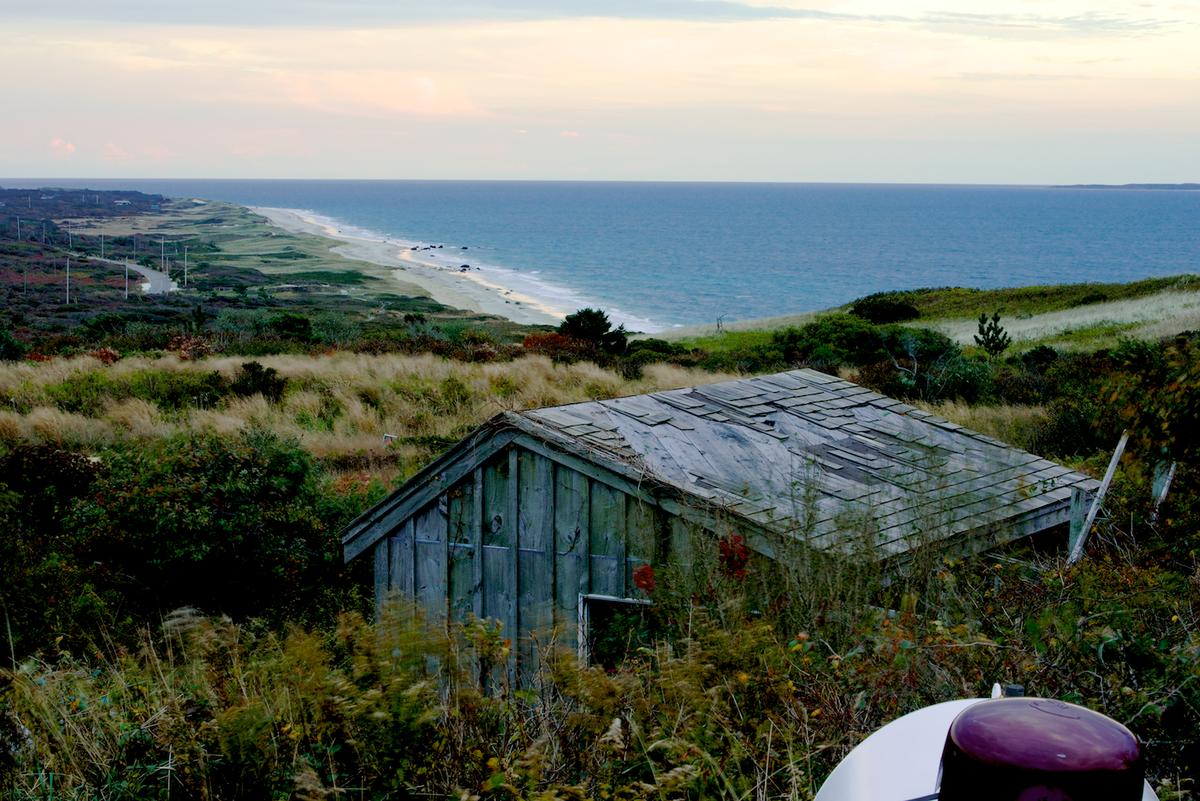 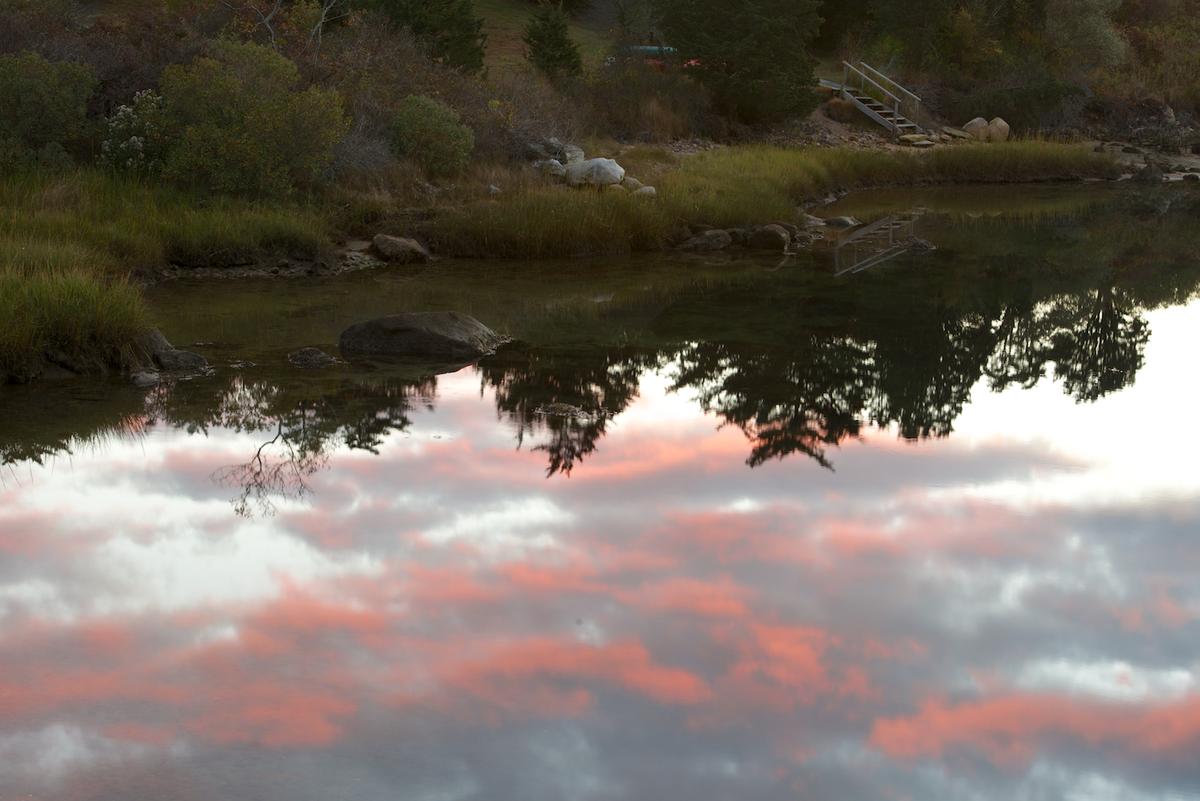 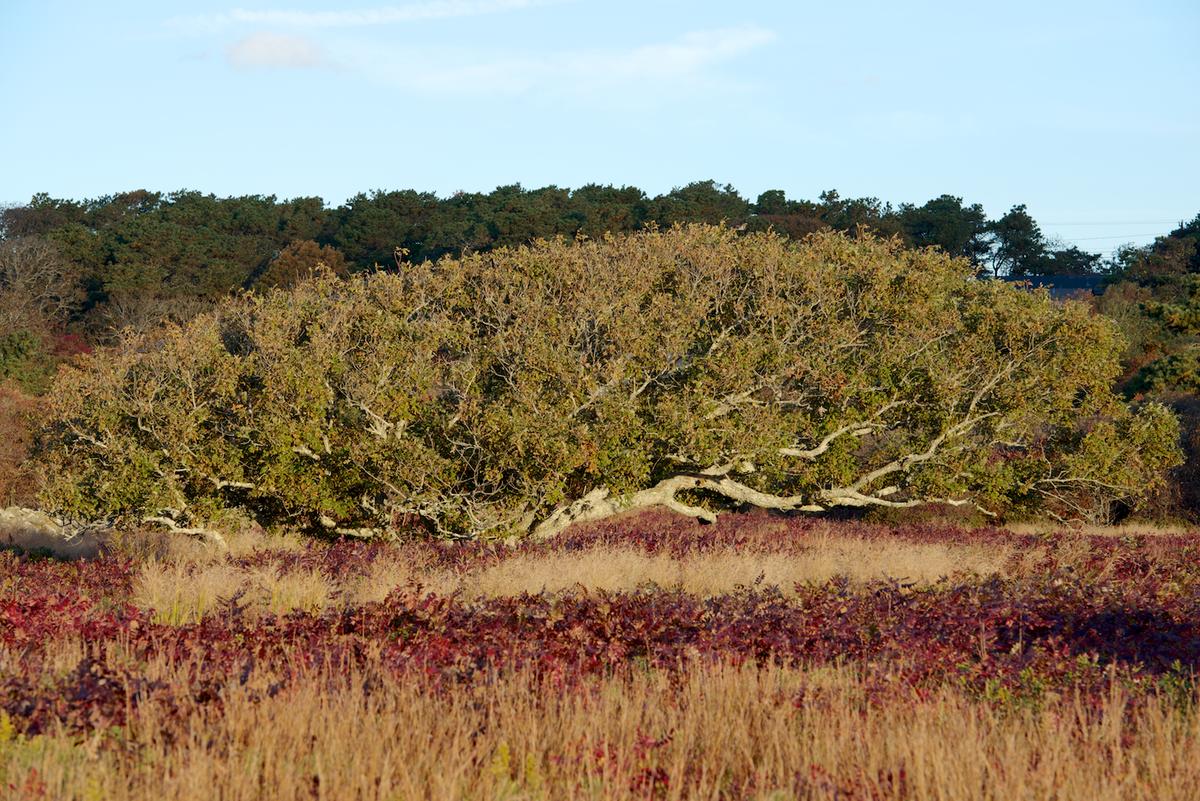 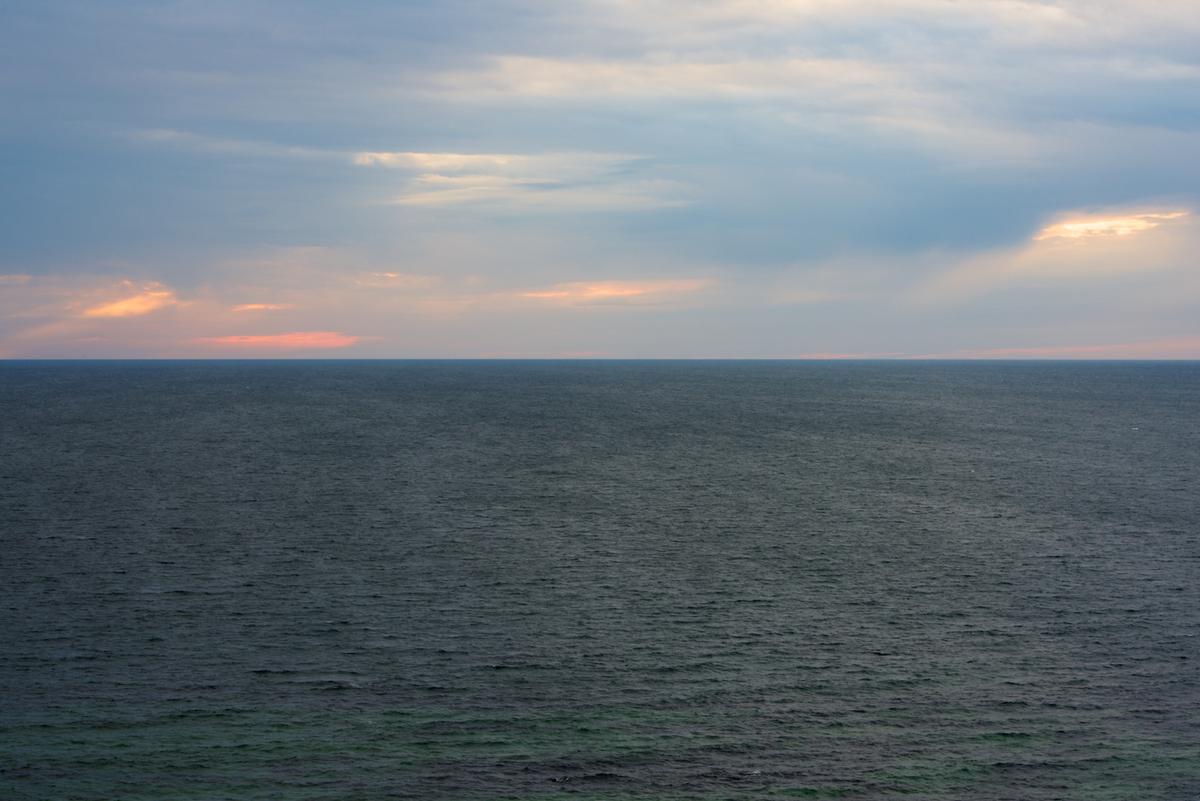 This is simply working with a pallete of colors.

I started out in my career (44 years ago) as an artist by studying and wanting to be a painter. During my student years I spray painted large canvasses of horizon-based landscapes in bright colors. I was quite successful but I was taking photography courses at the same time as I was painting. Although photography won me over it is somewhat ironic that I was a colorist as a painter, then, while a photographer for the next 30 years, I stayed within the discipline of black and white. Now, back to being a colorist.

Mahala Magins is an Australian painter and one of the four other artists here at the Baer Art Center on a one month residency.

As a point of reference this is the first time I've profiled an artist that is not a photographer. About time.

Mahala is a warm, funny and hard-working young artist whose wonderful paintings align well with where we are at present in Iceland. When I met her on the bus trip up to Baer from Reykavik, we discussed Mark Rothko as being an influence to both of us. That began an ongoing discussion about our art, its origins and where it is headed. 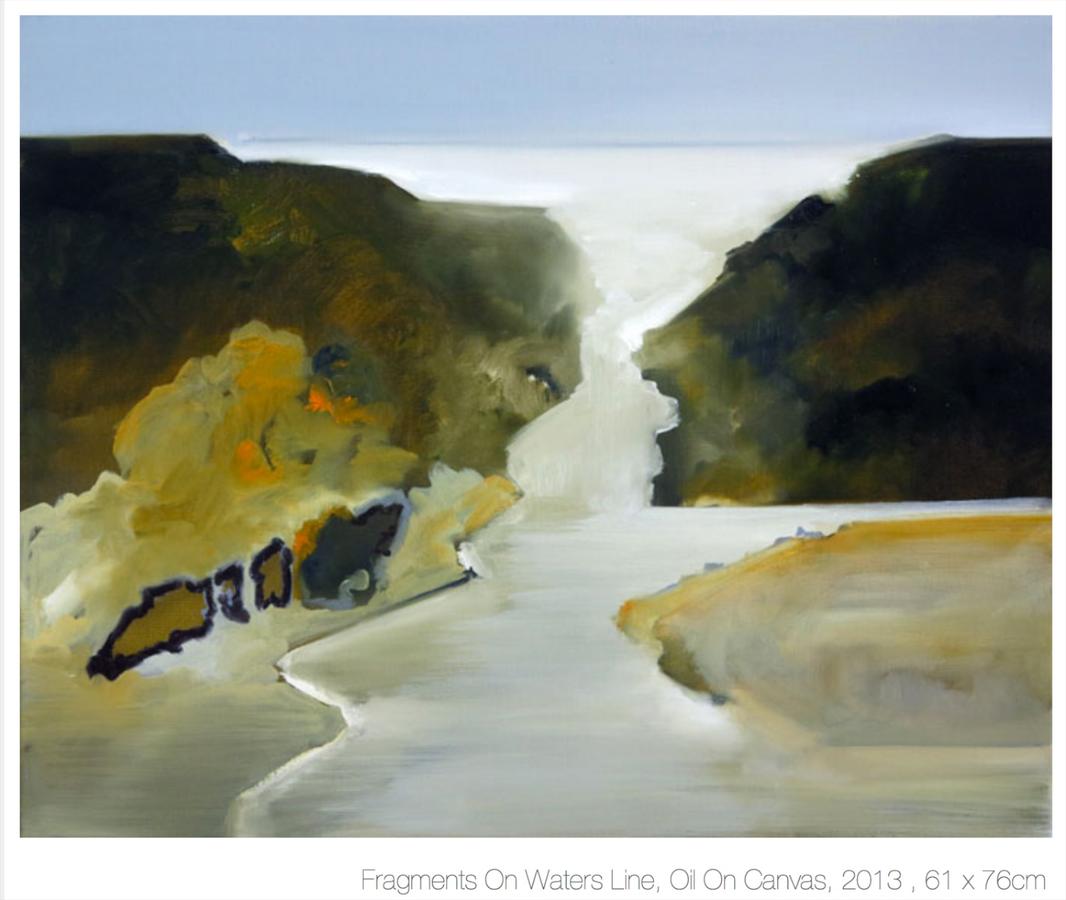 On her website she gives a good sense of what her practice entails, how she works and what her emphasis is:

Both landscapes and portraits are equally at home in my art practice. Often they are entwined, with the former occasionally breaking free to offer unrefined views of slightly surreal urban and natural settings, while the latter being rarely allowed to forget their surroundings.
I like to use raw, emotive and loose brushstrokes teamed with bold colours to help create the abstract nature of my landscapes and spontaneity for the creation of my portraits.
Viewers often express that my portraits are both raw and whimsical at the same time, and the emotion that I try to convey through my figurative works, whether it is happiness, sadness or vulnerability, is harnessed through my everyday inspiration.
The abstract nature of my landscapes are created with an emotive and unregulated brushstroke that was encouraged by growing up in the bush lands of Northern New South Wales. The Gibraltar Range is such a place where there can be structured trees in perfectly straight rows or an open canvas of land that can become immersed in both emotion and uncertainty. It is this juxtaposition that has helped to create the bold and abstract but coordinated form of my works.

Here is her CV: Mahala Magins 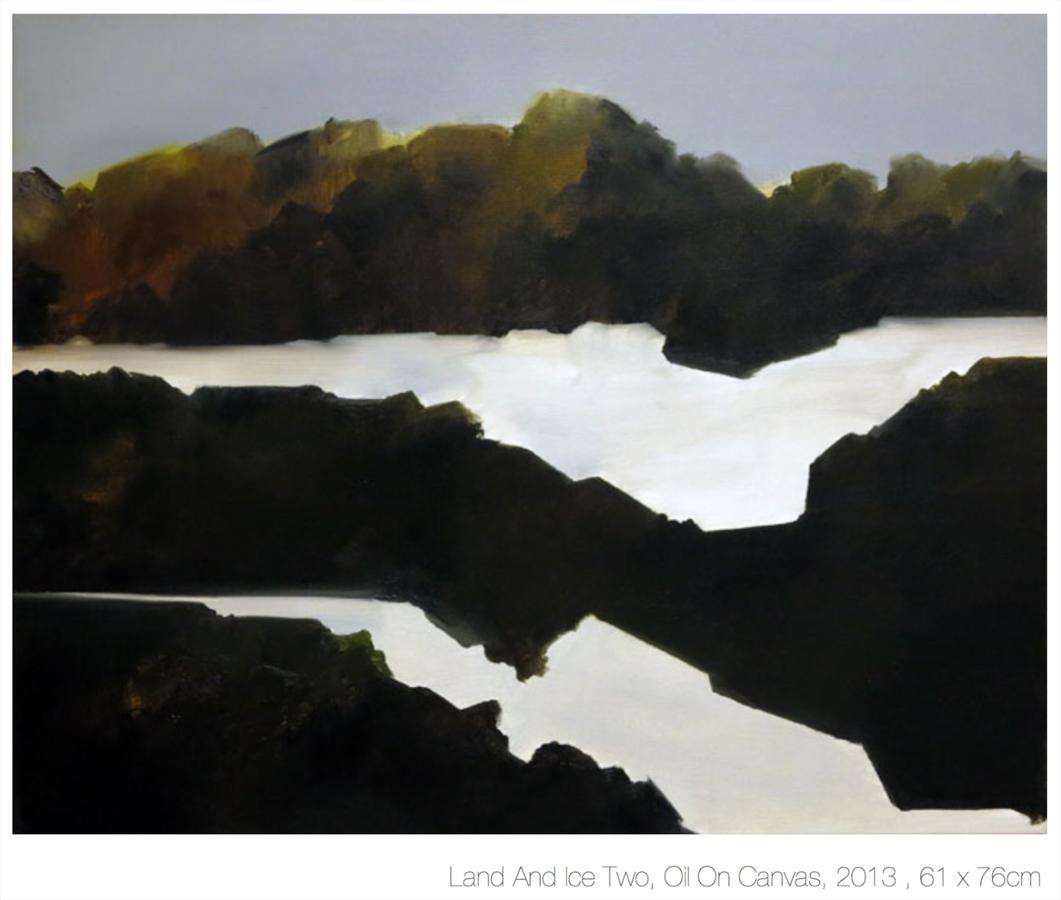 I interviewed her one afternoon sitting in my studio at Baer in July, about a week after we arrived, on a cold and windy Saturday afternoon:

So tell me how and when did you know you wanted to be an artist?

Mahala: Very early. I feel like I always knew. We had long rolls of old wallpaper and I would draw on them as a kid. In high school we had to do something called two unit or three unit and I had a big argument with the principal because I wanted to do both of them which meant I could do art too. I won that battle. I was brought up in a very supportive community of friends and family that acknowledged my desire to be an artist. After high school I took a year off to do TAFE (Technical and Further Education), which allowed me to work with a mentor (Rene Bolton who is from Holland) on a weekly basis with about 15 others and also be in my studio about three days a week. I am still very close to him and he was a real mentor to me. 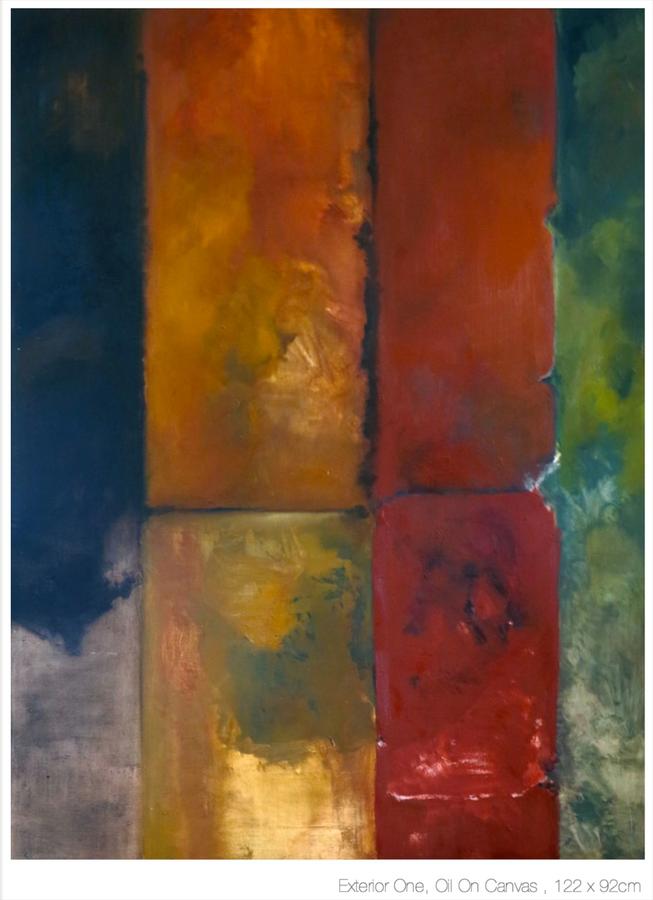 NR: You went to university and majored in painting, working quite independently the last few years. Were you influenced by that and other artists at that time?

MM: Very early the work of Henri Matisse was important to me. But I did go through a period of time where I didn't want to be concerned with too many outside influences. In my second year at university I wanted to work from inside and to be very minimal. I've always been pretty self sufficient, being able to work on my own, and feel as though I don't need people around me to work or so much for inspiration. 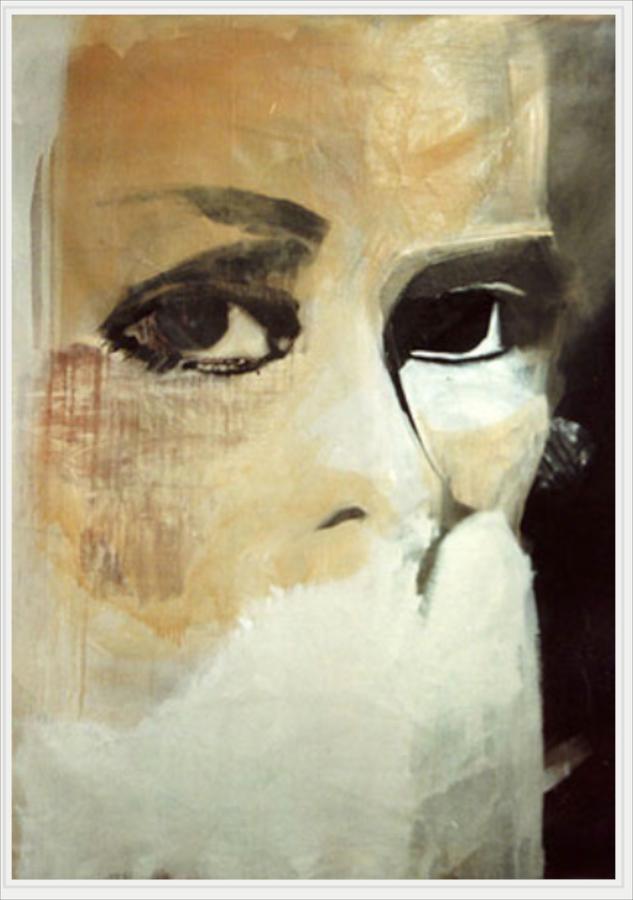 However,  later I was definitely very influenced by the work of Antoni Tàpies, as he worked in a very limited color palette. I found that very interesting. For much of this time I was both a figurative painter and a landscape painter and I am still both, although at Baer in Iceland I find myself working in landscape more.  Univeristy was definitely one of the best times in my life.

NR: What's it like for you being a painter now? In Australia?

MM: Initially, right after obtaining my degree at university I felt very unsupported and alone in the community. I remember feeling like, what am I going to do now? It felt like an empty space and anonymous. It took about two years for me to realize what was there, how there was a broad network of artists, galleries, organizations and networks that were supportive. There's a lot for us: there are grants, and residencies, art prizes, group shows and community groups. But I am also comfortable being independent. I grew up with a single parent and that helped make me self sufficient.

NR: The other thing is that, in some ways, you're a veteran artist (MM: laughter). It's true because, although you're young, you've been making art a long time.

MM: Yes, it's true. It's not like I entered university not knowing that I wanted to be an artist. I always knew I'd be an artist of some kind.

NR: Do you have any shows planned or up now?

MM: Yes, I have my first solo show now, while I am here in Iceland, back at home.

MM: Thank you. But back to influences. Lately I've been very interested in the work of designers, such as Charles and Ray Eames, furniture design and architecture.

NR: Tell me a little about what you're working on now.

MM: I feel like I've been doing a 180 (degrees)! The work of Mark Rothko has been important and recently Sean Scully has been huge. What was amazing was that I had actually produced all these works and then not realized who he was. Here in Iceland I can work with that, these big color fields.

NR: When we were talking earlier didn't you say that you apply to something like 20 residencies a year?

MM: Yes, well that includes art prizes too. I basically made the decision, I want to be a full time artist at the end of the day, I want to have it as my first income. So now, I have a day job, but it is something I can check into and check out of with no other requirements as my first priority is to work and to get my art out. If I'm going to get there, I am going to have to work really hard to get it. Right now, I go to my job and I leave my job. I would love to be  in this gallery, Roslyn Oxley Gallery in Sydney. It is one of the most sought after galleries in Australia.

NR: Mahala, I want to thank you for a wonderful interview. Thank you vey much for your time. And I wish you the very best in achieving your goals.

MM: Thank you. I enjoyed it. 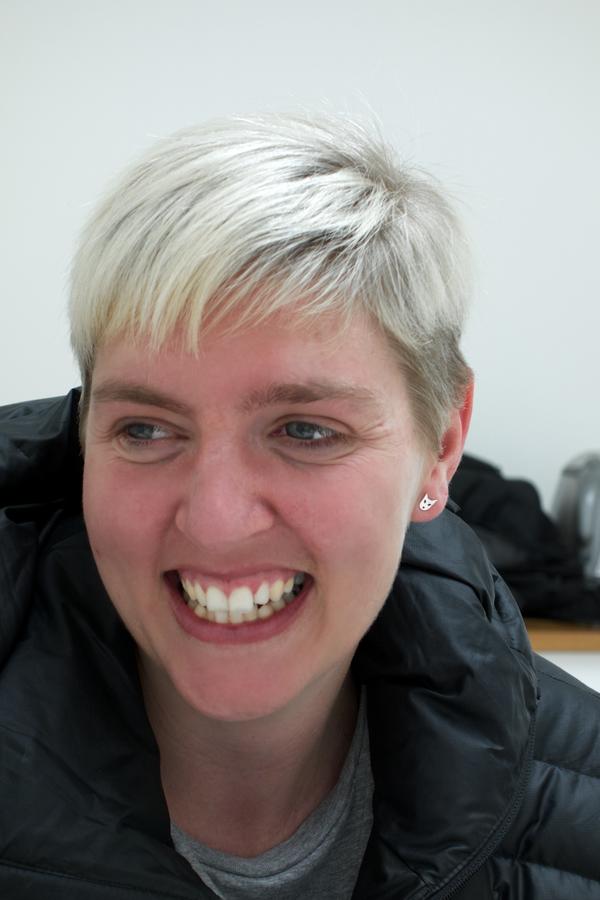 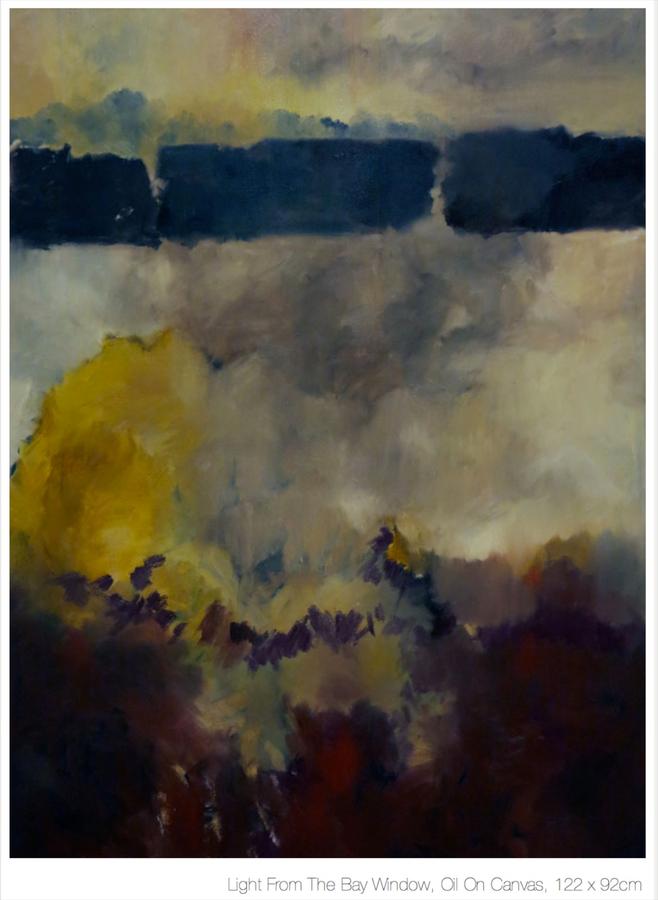