What if you wanted to photograph in a different way? What if you wanted to make pictures that spoke with concentration about varying interpretations and definitions from the same subject?  What if you wanted anyone looking at your work to realize it could be about it or it could be about what you did to it? What if you were in the same place for, say, a couple of weeks? More specifically, what if you assigned yourself to photograph along the same stretch of road again and again over that time period? What could happen through repetition? Could you break through to something far more significant? Or would you repeat that same material with minor variations ad nauseum? What would happen?

Well, I haven't been doing this approach that long, and have only worked in the same area for a two week period or so but I did establish a pretty strong foundation  by starting to shoot what I will show you from the air, then working to make pictures along the ground. It is an area on Martha's Vineyard called Moshup Trail and it is only a few miles long of road facing the south shore of the island. It is flat and mostly unbuilt upon. Perfect material for flat and boring landscape pictures. I wondered if I could transcend that. Let's take a look.

First up, I'll give you the aerials so that you can see the project's "foundation". I photographed in Aquinnah, very close to the tip of the island if Martha's Vineyard about a mile from the famous cliffs at Gay Head. These photographs are intended as a sort of survey of the area, the land and how it sits up against the beach and the ocean: 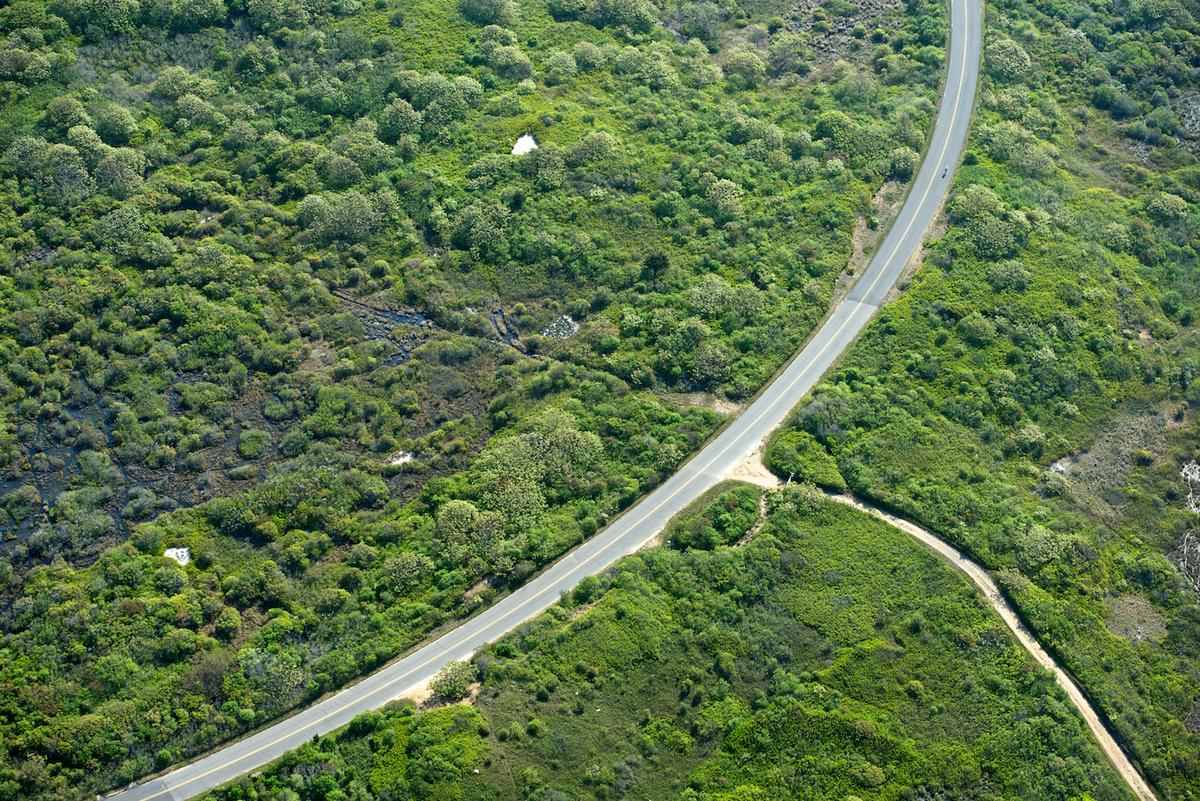 This big curve in the road is where the road has come out near the ocean from the interior of the island and parallels the shore. The area I was interested in starts here. 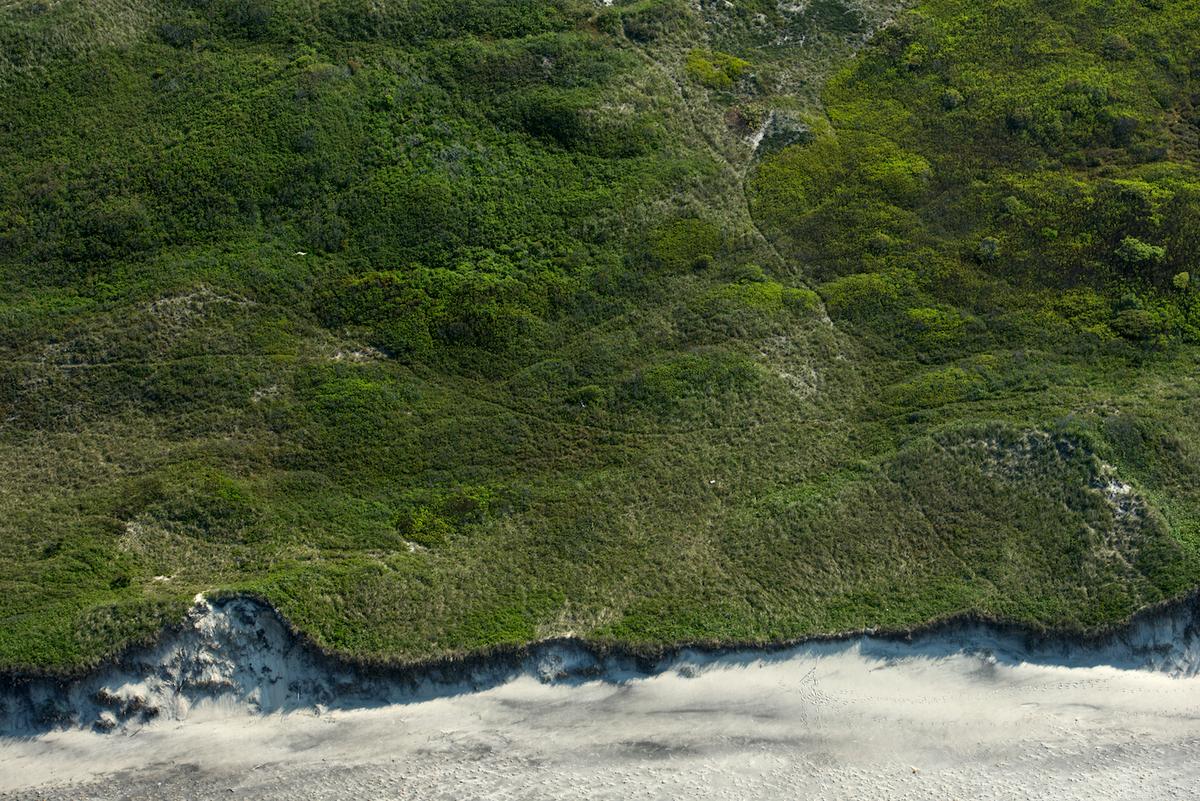 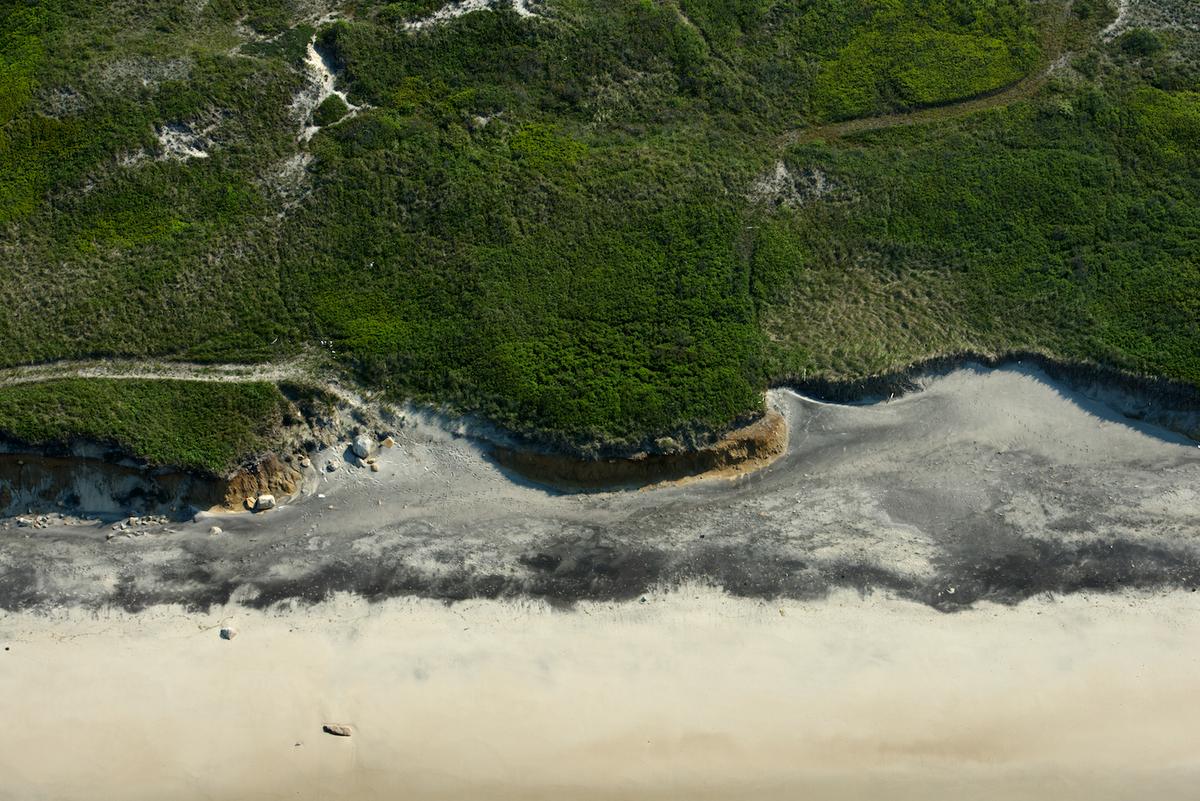 This is the south facing shore of the island with prevailing winds that are brutal in the winter so nothing can grow very high here. 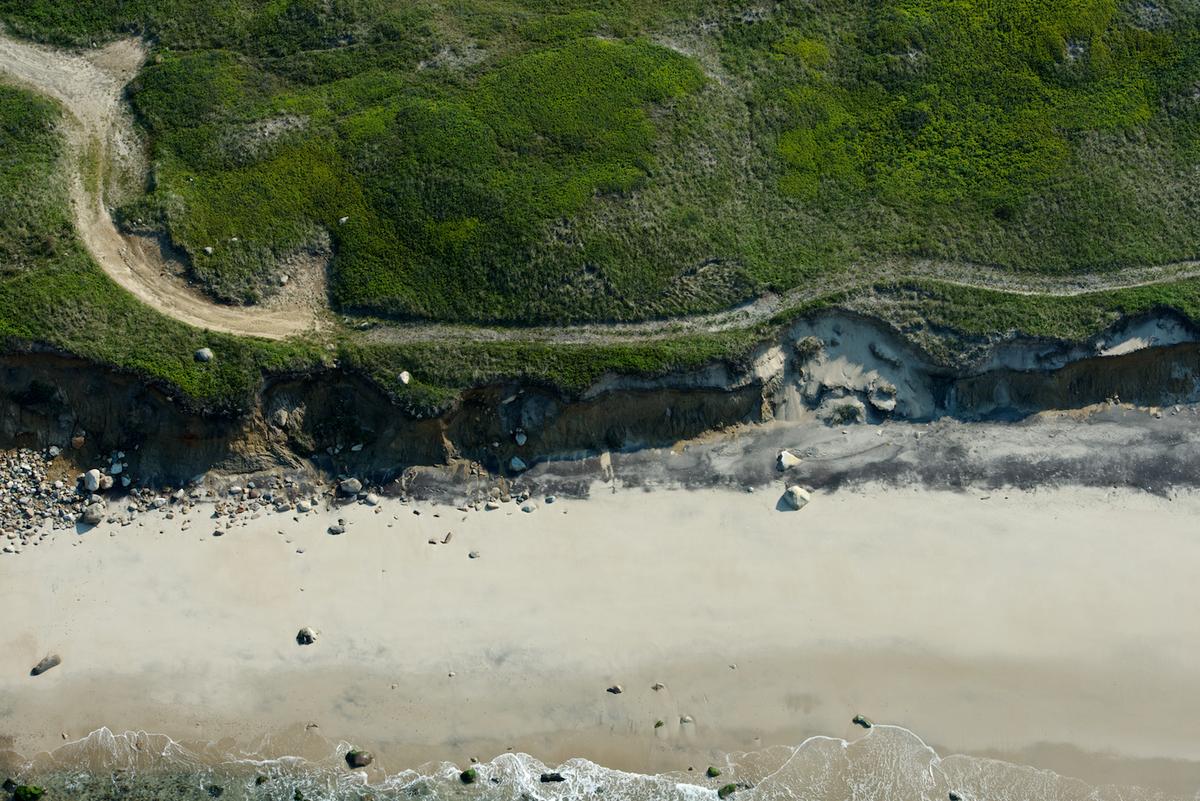 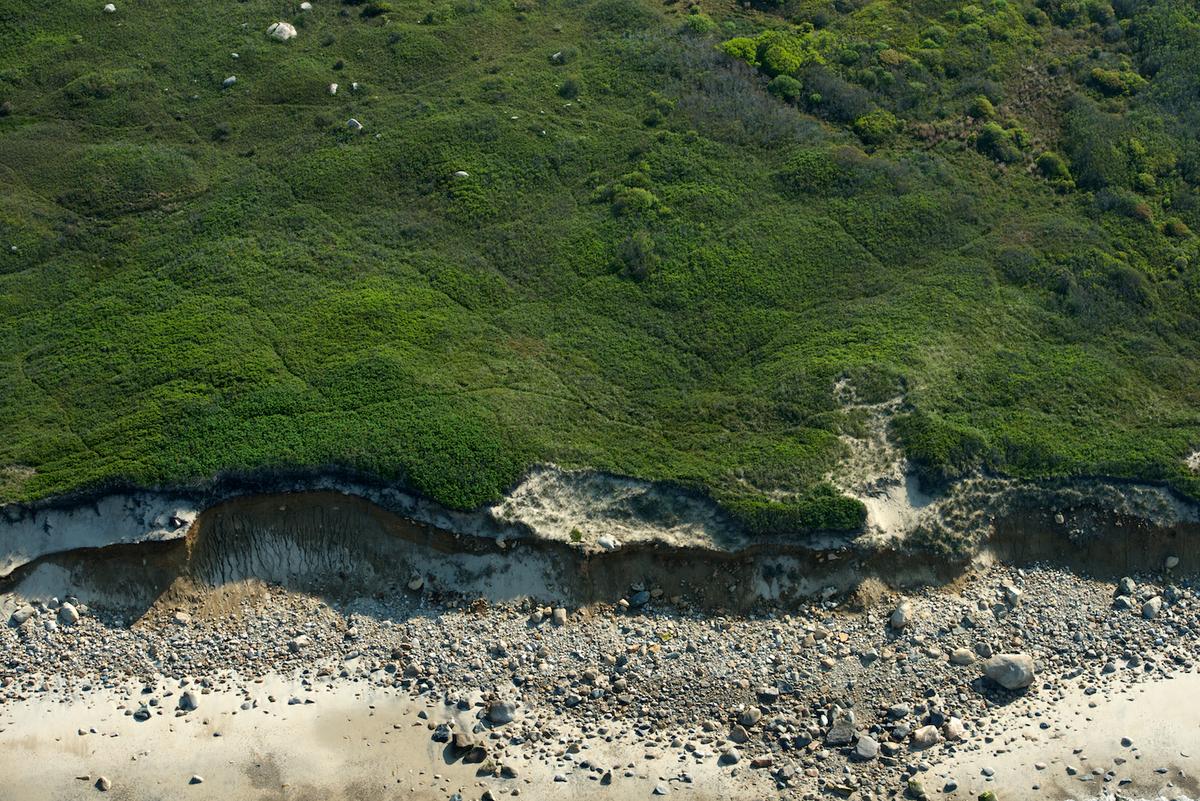 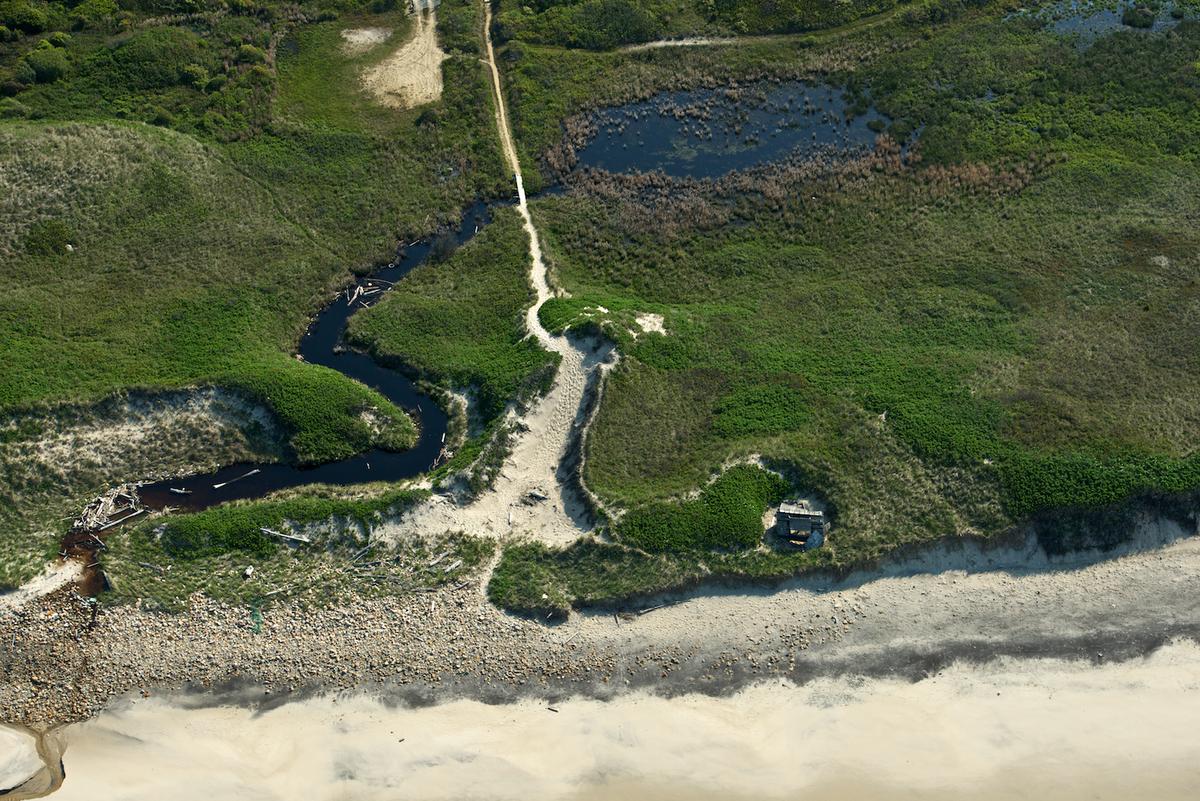 Although you can't park anywhere alongside the road and there is no access allowed with no trespassing signs, there are well worn sandy trails from the road down to the  beach. 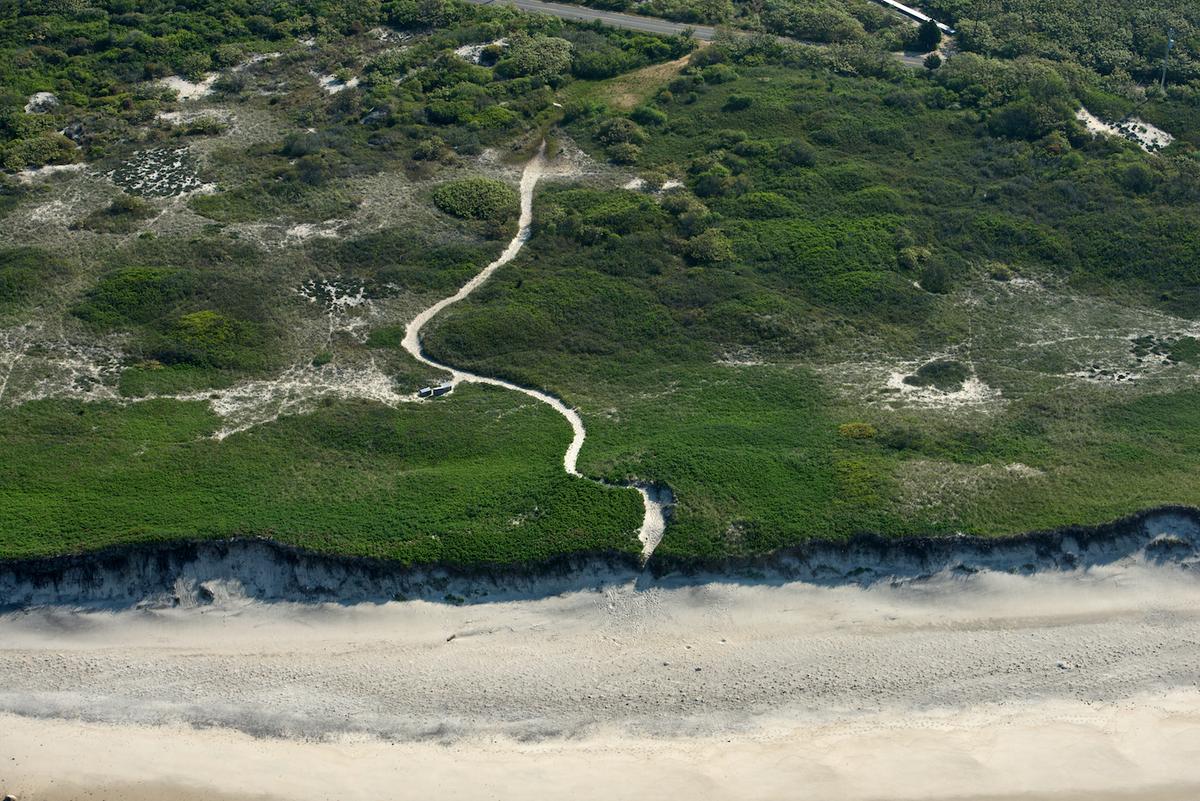 In the image above you can see the the Moshup Trail road along the top of the frame. 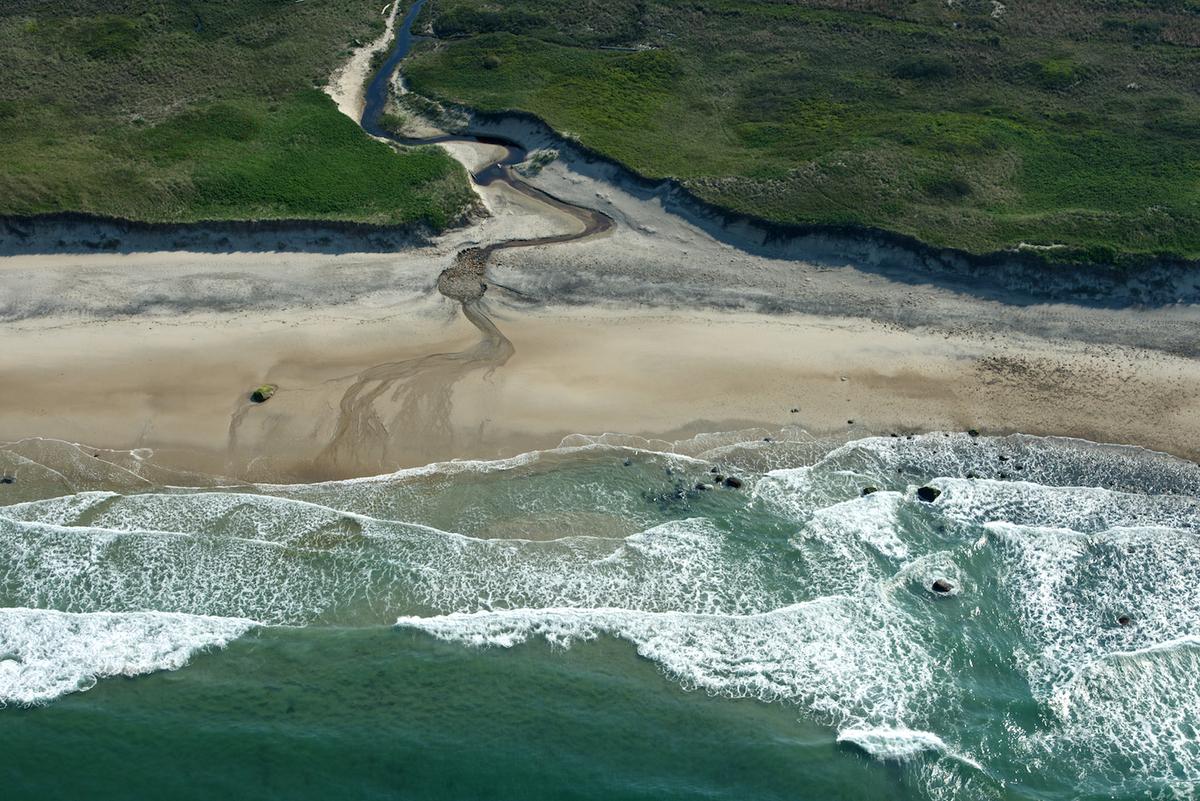 Okay, so that gives you the way the area looks. I made these pictures before I started making the pictures from the same area on the ground. 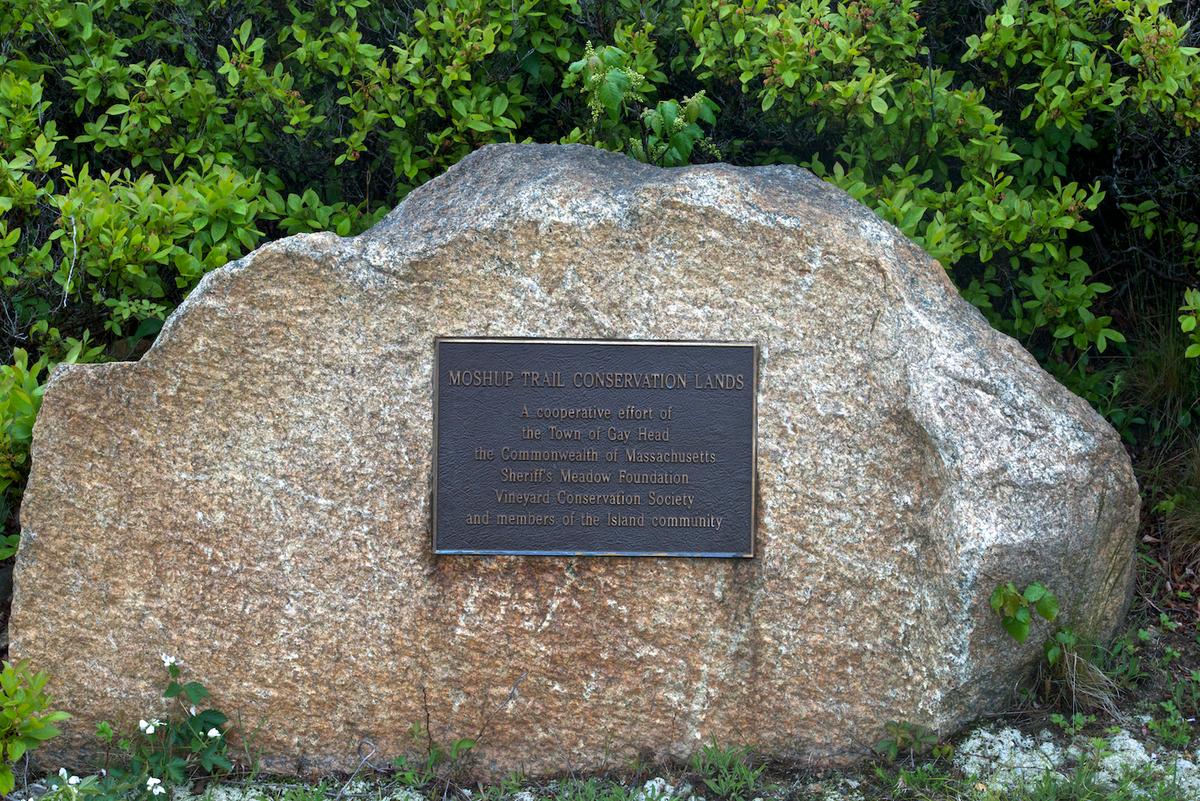 This plaque sits along the Moshup Trail road at the curve. Here's a blow up of the plaque: 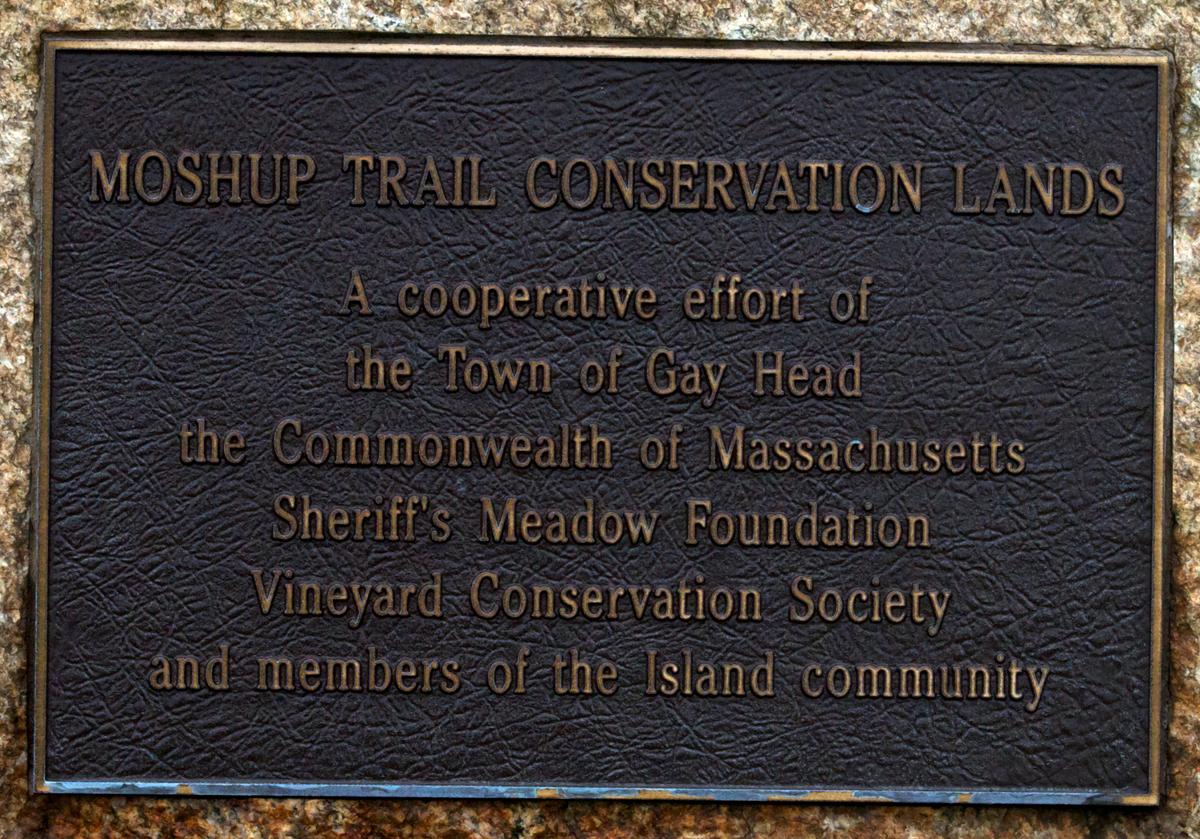 This simply states that the area is preserved as conservation lands, meaning nothing can be built on it. 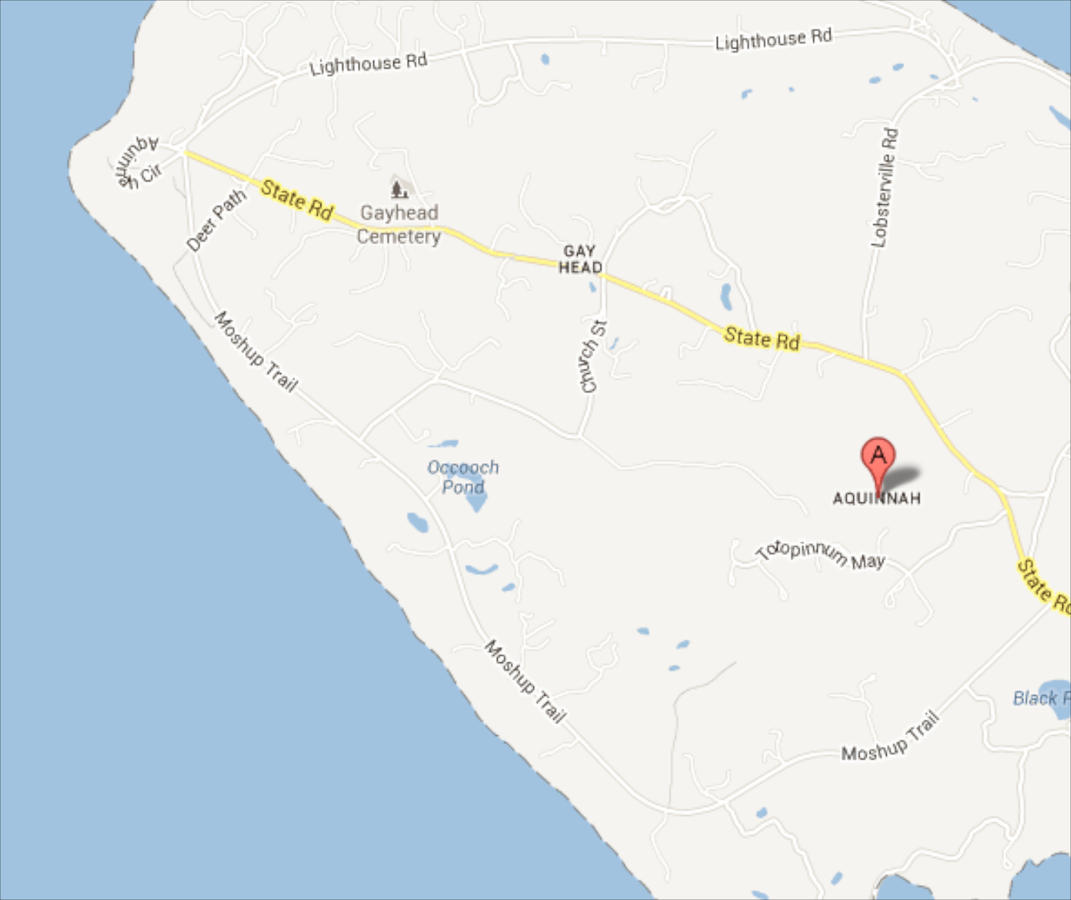 Hopefully I've set this up to show you how the area looks from above as a kind of survey or a map. In the next post I will show you work I made when photographing along the same stretch of maybe a couple of miles of road while on the ground.

I have some newer friends on the island, and some of them are in the arts or into photography. It is challenging to bring these friends into my work as they don't have a long term history with it or me. One of them, a great guy named Sam, said one morning over coffee that I really ought to get into books as my series work would be perfect in book form. It took me a couple of days as he went off island, but when he returned, I gave him a copy of American Series, my black and white book from 2006. He now has stopped saying I should get into books.

I am often asked if I am still into series work. My point is that yes I am, but that how I make series pictures and how they look has changed drastically. I would hate to think that the idiom hasn't changed for I try to grow as an artist. Earlier my series were pretty straightforward, pictures next to pictures, hinged or contrasted through a sequence, very often simply a walk through a neighborhood or a place, but often contained within a structure that was predetermined but relatively consistent. Same print size, same tonality in the prints, and so on. But more recently I can feel the form changing and growing, almost on its own, which is a little weird, but I am so far trusting it, allowing for things like black and white and color to coexist or for the pictures to be more about the thought contained in the work than about the place I am photographing. These new pictures take that track, to speak more about what I  chose to do to the things I was photographing within the context of still staying recognizable as place, an area, a couple of miles of flat land between a road and the ocean on an island. Love that! The ability to control the outcome by what we choose to include and deny.