Happy New Year. For all of you, I hope that 2016 proves to be the best year yet.

We are going to look at another portfolio of my photographs made in series. 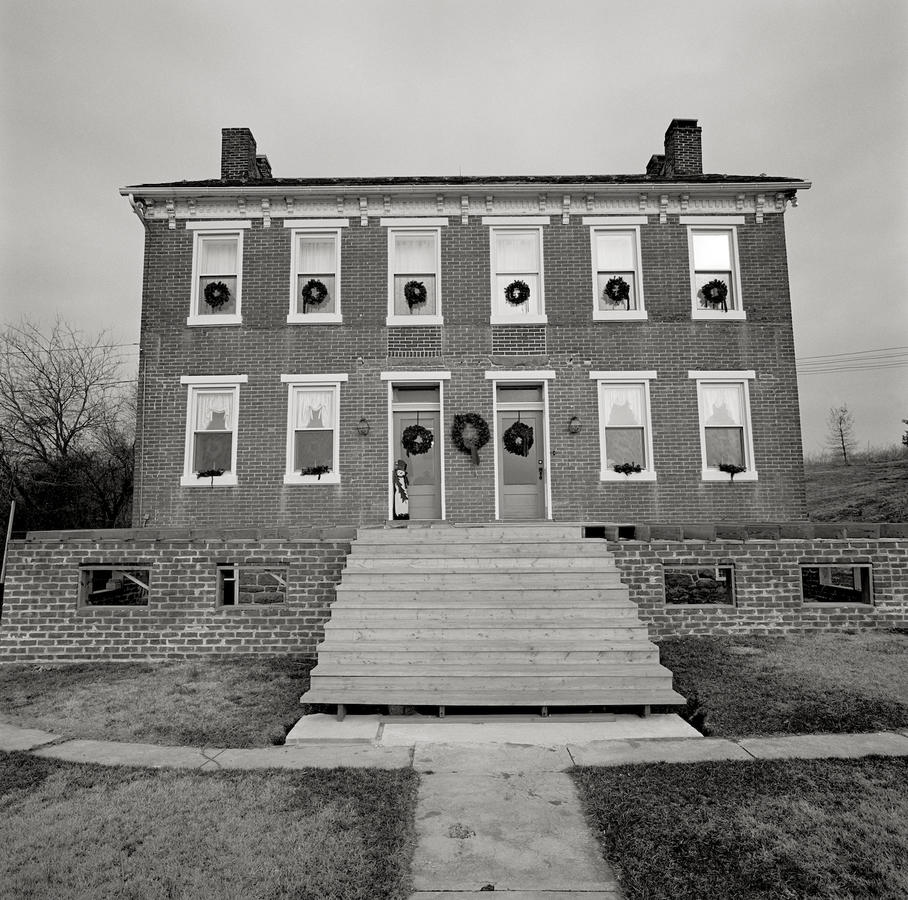 This explains the series a little:

The Hershey pictures were made at a time when I was expanding my understanding of what was possible within a series project. I had made the Portland, Maine series earlier in the year and the Oakesdale, Washington series the previous summer. This was a farm that looked abandoned, off to the side of the road on the way out of Hershey on another spring break trip to photograph, heading back home to Boston with a friend. We stopped and photographed for a while. It was cold and gray as much of March is.

Of course, I am quoting myself here, the piece above written for the info tab on the gallery page of the site. The full series is here.

So let's take a look at the series, which is short. Friend Rob Sansone and I were heading out of Hershey, it was overcast and felt like it could snow, and we weren't really on the hunt for pictures but this spare farm got our attention as we drove by, sitting back from the road maybe 1/4 of a mile across an empty field. I parked the car in front of the house you see here and noticed that the Christmas decorations were still up and this was late March: never a good sign. The place looked completely abandoned. We walked up to the front door and knocked and waited. No answer and no noises from inside. We saw no cars and no animals, indeed, no life at all. So we walked around and made pictures.

Often in my series work, I have a sense that this either is a truly special place or that I am working to define it as such. By this I mean that I am wanting to form a connection, that this connection with a place or an area or the quality of the light or time of day is essential for me to make a series from it. Often, this is a forced connection and then, somehow, the series will probably fail. Hershey right away was "important" and I knew it. There was no problem with making a connection here for it was amazing. This farm positively exuded its history, its successes, its failures, its struggles, the people who had made it, the children who had grown up here and those who who had worked it. All I had to do was "get it done", to walk around, look, make the pictures, get them in the can so to speak, handle the exposed film responsibly, process it well and make the prints. Easy peasy. So, did I work hard at making these pictures? Not at all. For, in an odd way, the photographs were already done. The job, of course, made over my whole career to that point, was to be sensitive to the potential the place offered to make my pictures. I refer to training and discipline, practice, fluidity and having made a shitload of pictures. 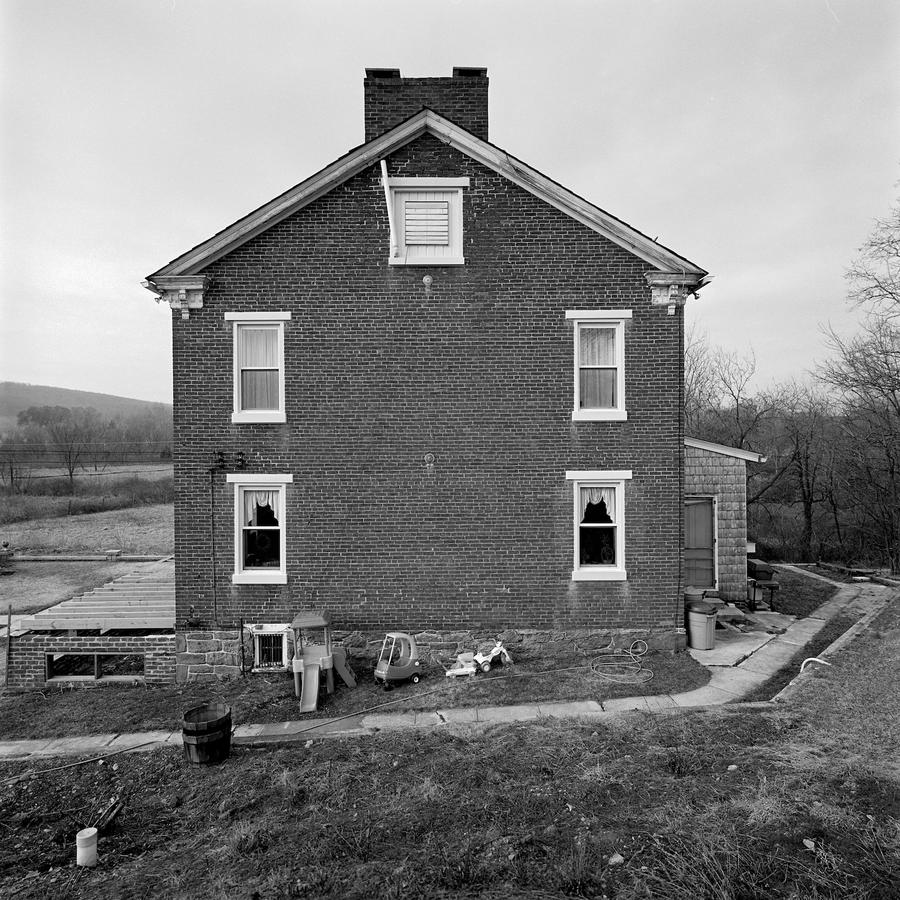 Bang. Right off. THE picture as a stand out from the rest to come. That odd unfinished front deck under construction that we'd seen only defined as being stairs in the first picture, kids toys, some sort of construction or perhaps a well being drilled on the lower left and the great distance in the somewhat hazy background all stripped bare, no green and growing here. And of course, this brick house, this  building smack dab in the center of the frame, front and center and with no convergence as I am standing on a hill and shooting level. Four windows and a vent in the attic. The concrete retaining wall serving as the moat around the castle. Finally a garden hose, exiting stage left, to return again later, absolutely. 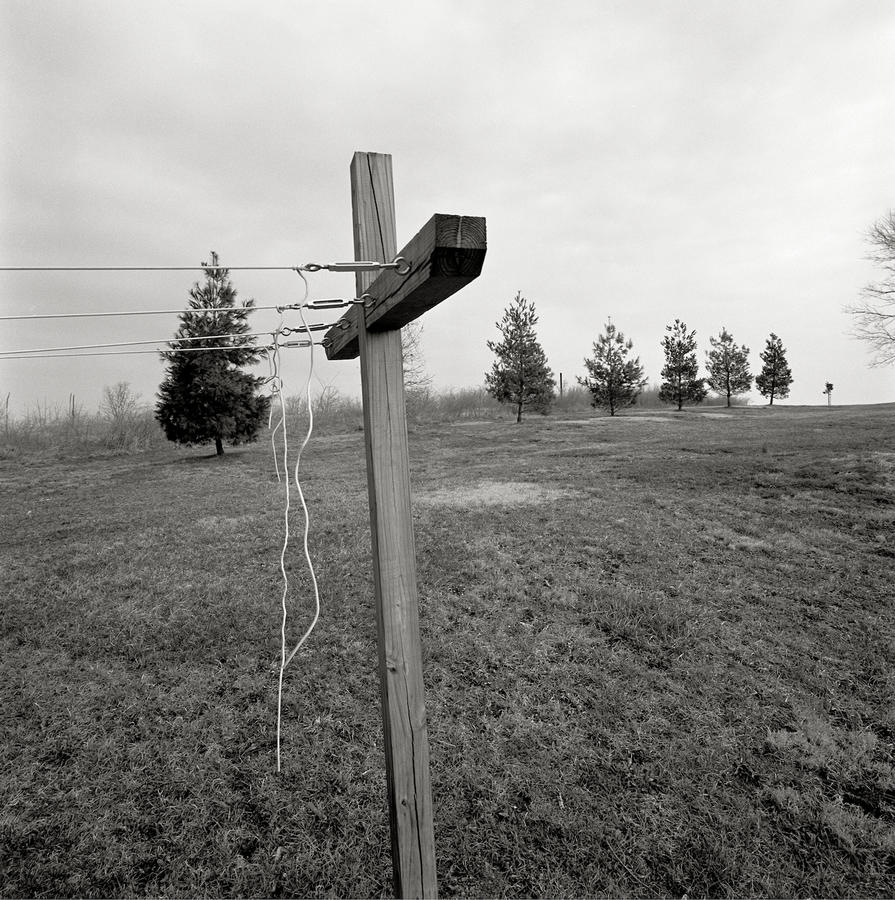 to 180 degrees and up the hill, presumably with the house now behind us. I use this a lot, this turning 180 degrees to make a new statement or perhaps to make a new "chapter" (look at Benson Gristmill for a 2015 example). A taught clothes line, a row of trees maybe recently planted, a hint of a bigger tree on the edge of the frame. An obvious allusion to a cross here, and a big open gray sky. Remember, this is a real walk around, the pictures set in the series to mimic my placement as I too discovered this old farm in Hershey, PA. This is clearly one of my favorite ways to work. 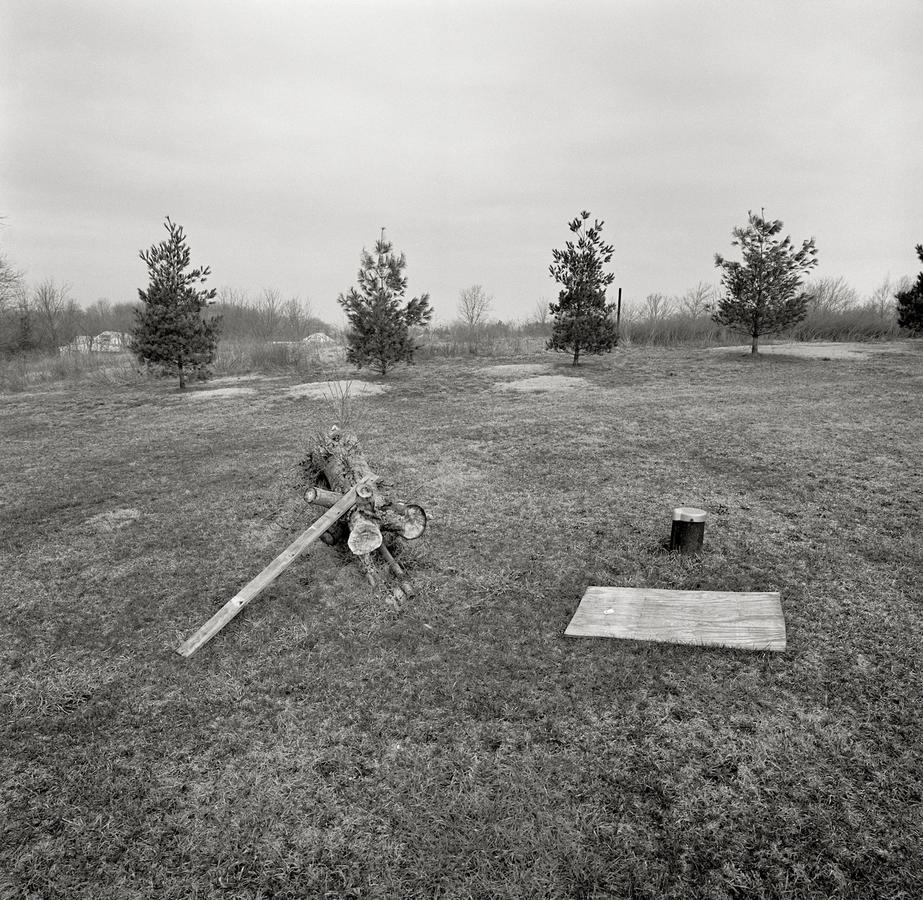 This one, logically enough, farther up the hill, but establishing some continuity as the row of trees are still there but with some very different content in the foreground. A log, a 2 x 4, a piece of plywood and another well hole. Were they searching for water and sinking several holes to find it? I have no idea and had no one to ask.

So, we're four pictures in to this series that totals thirteen, about 1/3 into the set. Let me think: this might be a good place to pause and to head into the fifth picture at the beginning of my next post. If you haven't peeked at the next one yet, number 5, are  you wondering what it is of? We've got to be heading somewhere, right? Where did I go next and what did I find? I wasn't working aerially yet in 1997 but you can see where my desire came from to show the whole thing, to be above it and aerially map it or survey it. This now evidences itself in series like:

where I shoot the same area from the air and on the ground. Those two are both from Martha's Vineyard.