Forgive the digression  to something technical, but it is often said that working within different formats in photography is like working in different disciplines. I have a hunch this is far more important within photography than outside of it. By this I mean that the tools we use to make our pictures carries great importance to us. We covet the good ones and swear at the bad. We also like to think that the pictures the camera makes affect the outcome tremendously. While that may true, to the non photographic world out there it probably matters far less. 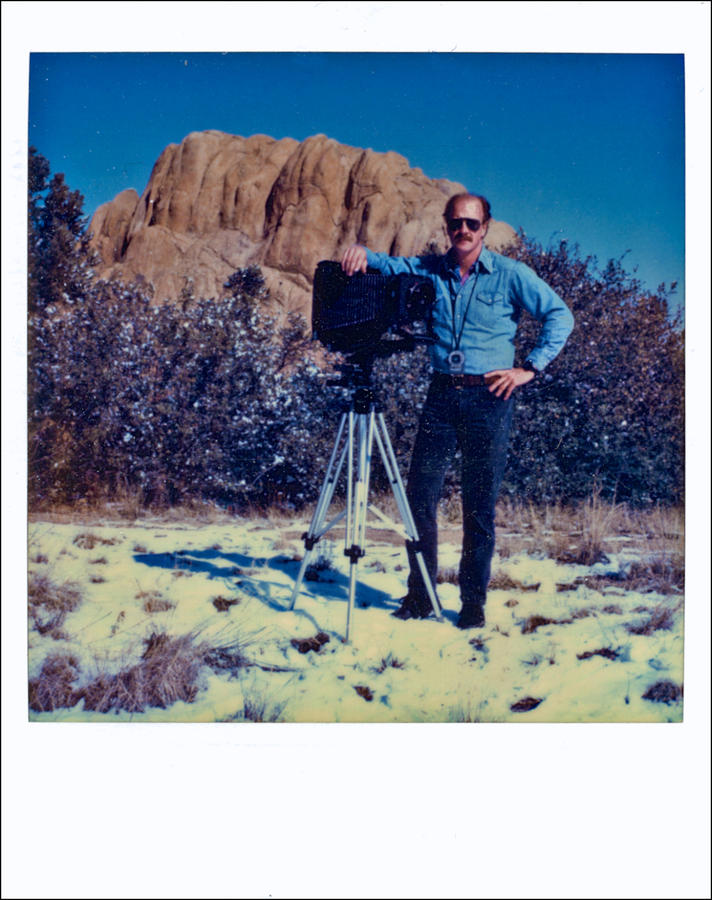 This above is me from a February 1986 Polaroid SX-70 in the rocky area outside Prescott, Arizona.

For 22 years I carried that heavy, cumbersome, bulky, expensive, high maintenance camera, with an incumbent load of labor attached every time I'd prepare to use it, make a picture, process the film and make a print from the developed negative. A flexible kind of camera? Hardly. Hand hold it? Not so much. Use long lenses in 8 x 10? Nope. 300 mm is the standard lens for the format. Wide angle? Yes, but limited, about 210mm being as wide as most people go. Fast shutter speeds? Almost never and fast in the format is most likely around 1/125. Fast lenses? No, most lenses are f5.6 at wide open aperture and my long lens, at 360 mm, is wide open at f9!

Why would anyone put themselves through that to make their pictures? Quality, pure and simple. A big negative means less enlargement and that means better sharpness, very clear rendition of details even at large magnification and the ability for the picture to have great depth of field with fewer penalties as in smaller formats. If that sentence confuses you, look up "diffraction." Most 8 x 10 inch lenses stop down to f64 and some go to f90.

Working with only one camera brings simplicity to the discipline. I didn't need to  question what I would bring when teaching in Italy in the summers: the 8 x 10. While on sabbatical leave, driving through the American Southwest: the 8 x 10. Countless day trips photographing projects near my home in Cambridge, MA: the 8 x 10. Skeletons and deformed body parts in glass jars at the Mutter Museum in Philadelphia: the 8 x 10. PWA's (People with Aids) in the studio in the late 80's: the 8 x 10. That simplicity combined with the very large negative made for pictures that just were, meaning that the foundation laid by this very large beast of a camera insured, that, while there were many things I could not do with it, what I did with it was of the very highest quality. Not a bad benchmark to have.

Would I go back to shooting this way? I don't think so and that is why I am thinking of letting it go. And finally, how does what it does compare to the way I  now work with a digital slr camera? Within certain limitations (size of print) digital is now so good and so incredibly flexible (I use Aperture, Photoshop, Nik software and the Image Print RIP) I see no reason and have no desire to go back to a camera format that was the prevailing image-making tool in the 1860's.

No equivocation in that last sentence, was there?