Continuing and finishing a look at the Salton Sea 2 series made in 2012. 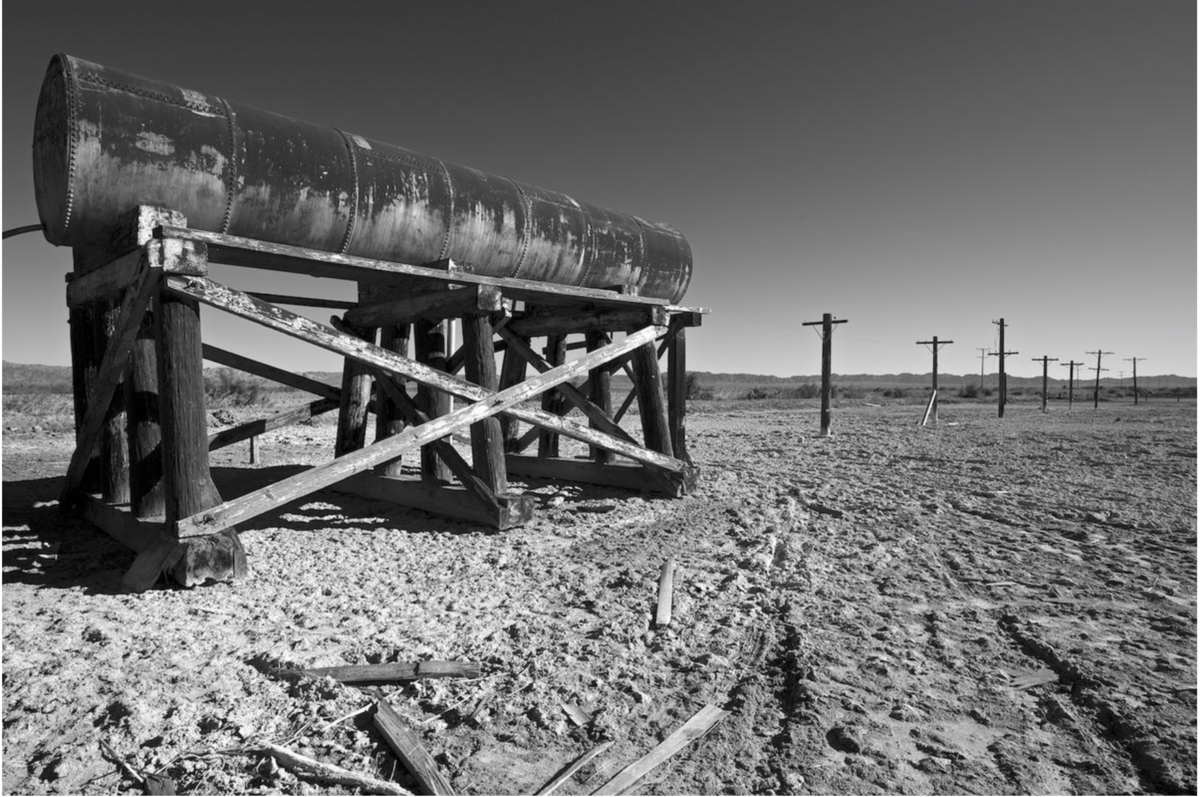 The Salton Sea, a simply incredible place, as if from another planet. The soil crunching under my feet and turning to powder at my step.

The "sun behind the pole" trick used here with some slight band of color where there's water in the background. 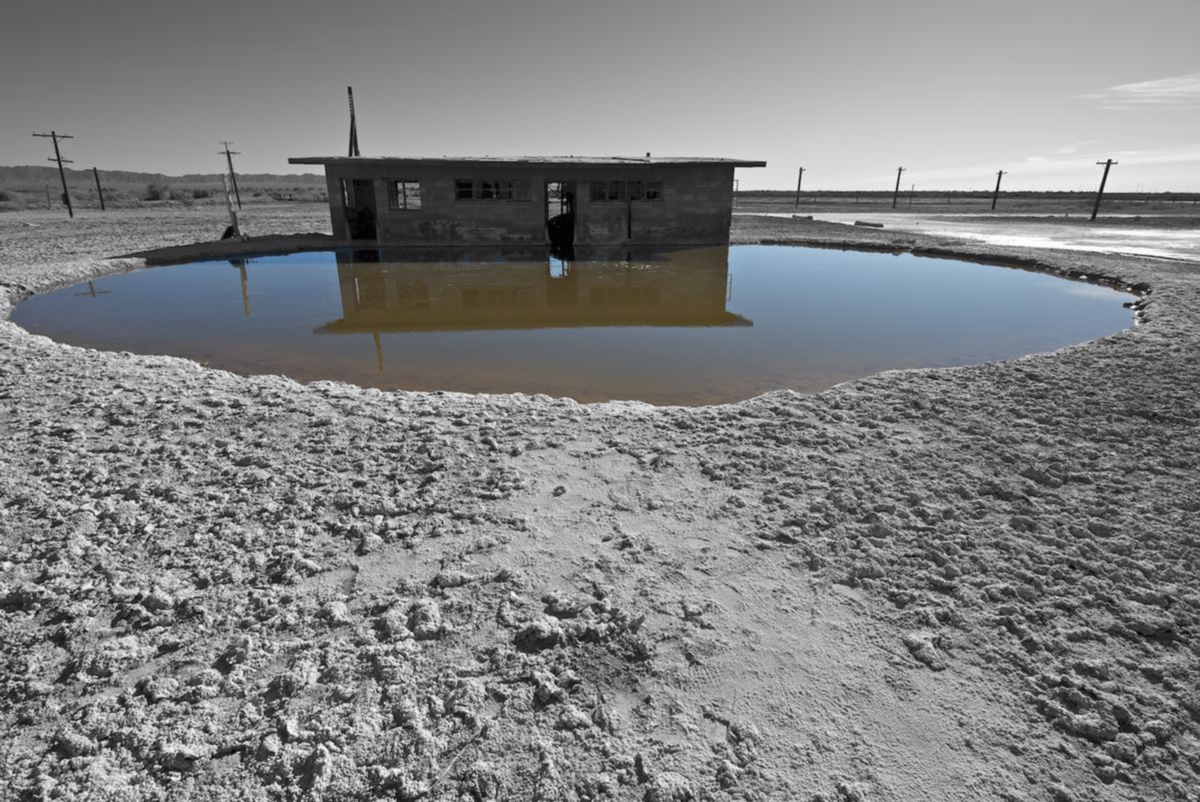 The first photograph in the series with a preponderance of color, some kind of fetid and polluted pond that stunk. The lens is now taking a larger role here. Push a wide angle lens down and verticals bow out. 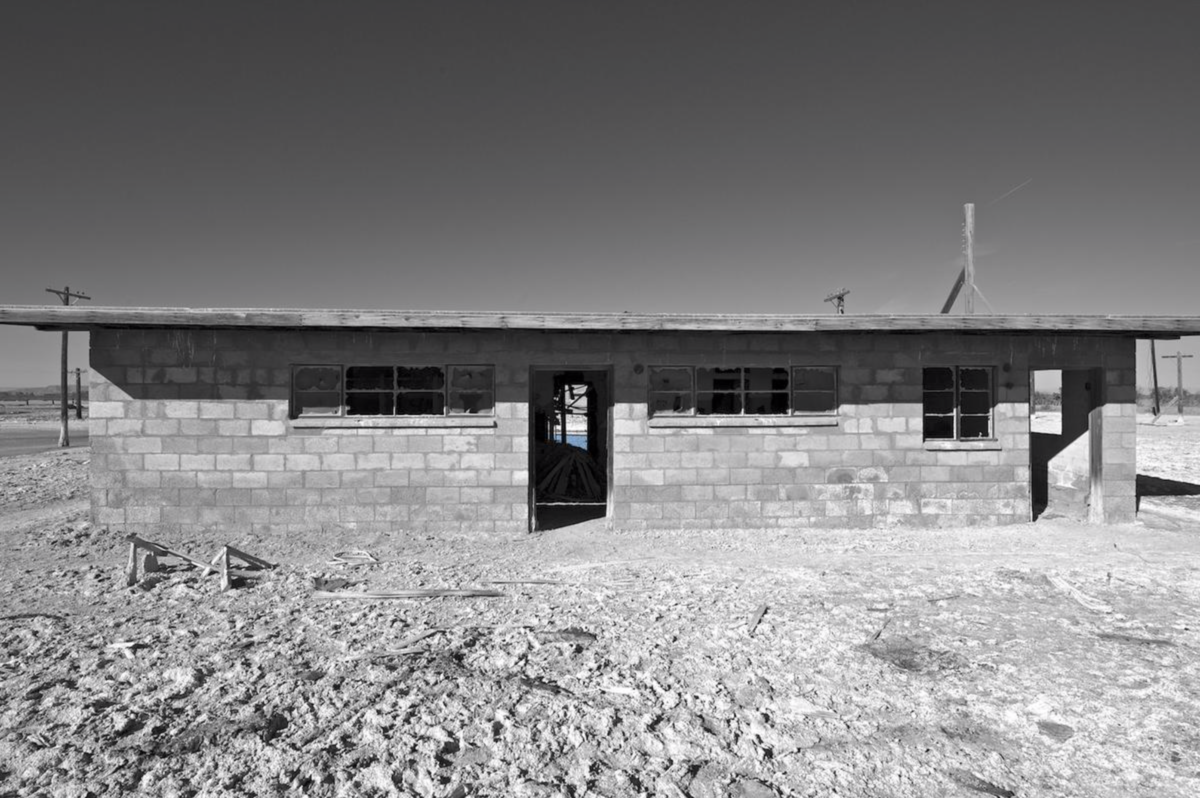 Back to our original structural device... long, blacked-out rectangular windows and here just a hint of the pond through the building, in color. This is one of those where the actual the print (at 22 inches across) makes a huge difference. Everything is probably too small here to see the subtlety.

Moving on we turn to the right and find another expanse of what looks like devastation: 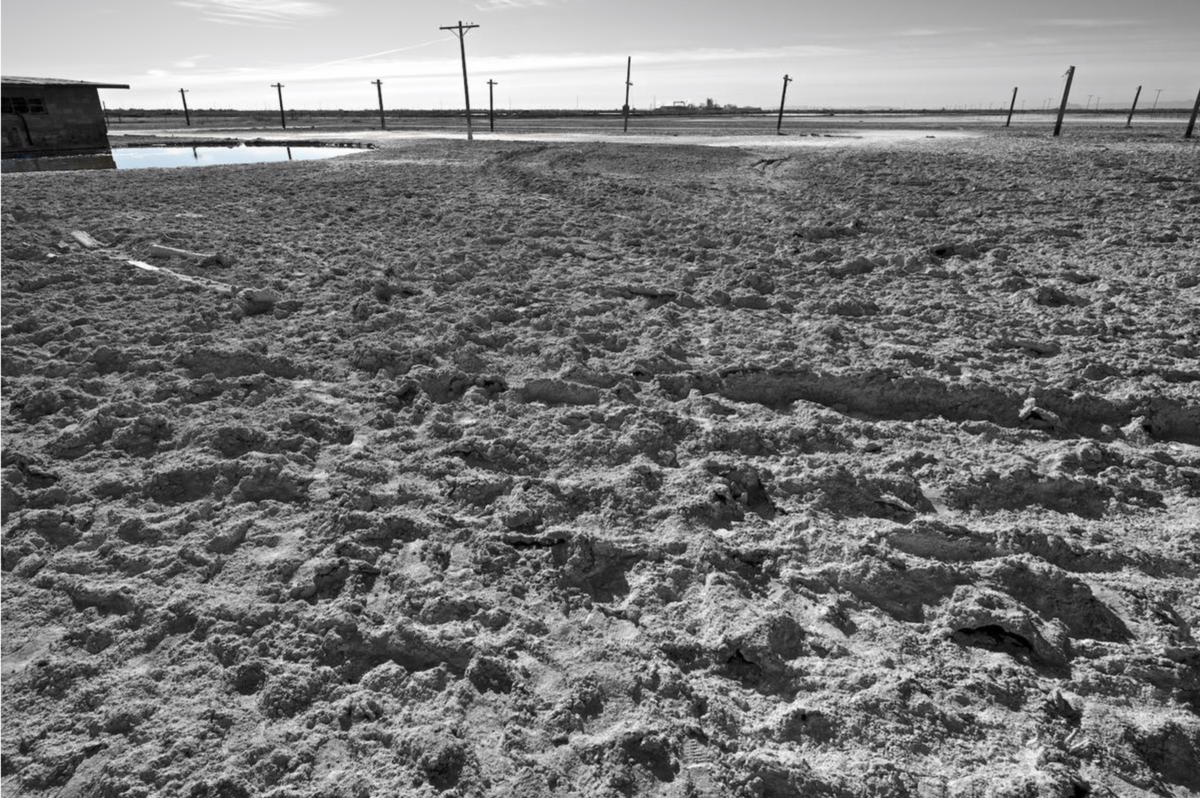 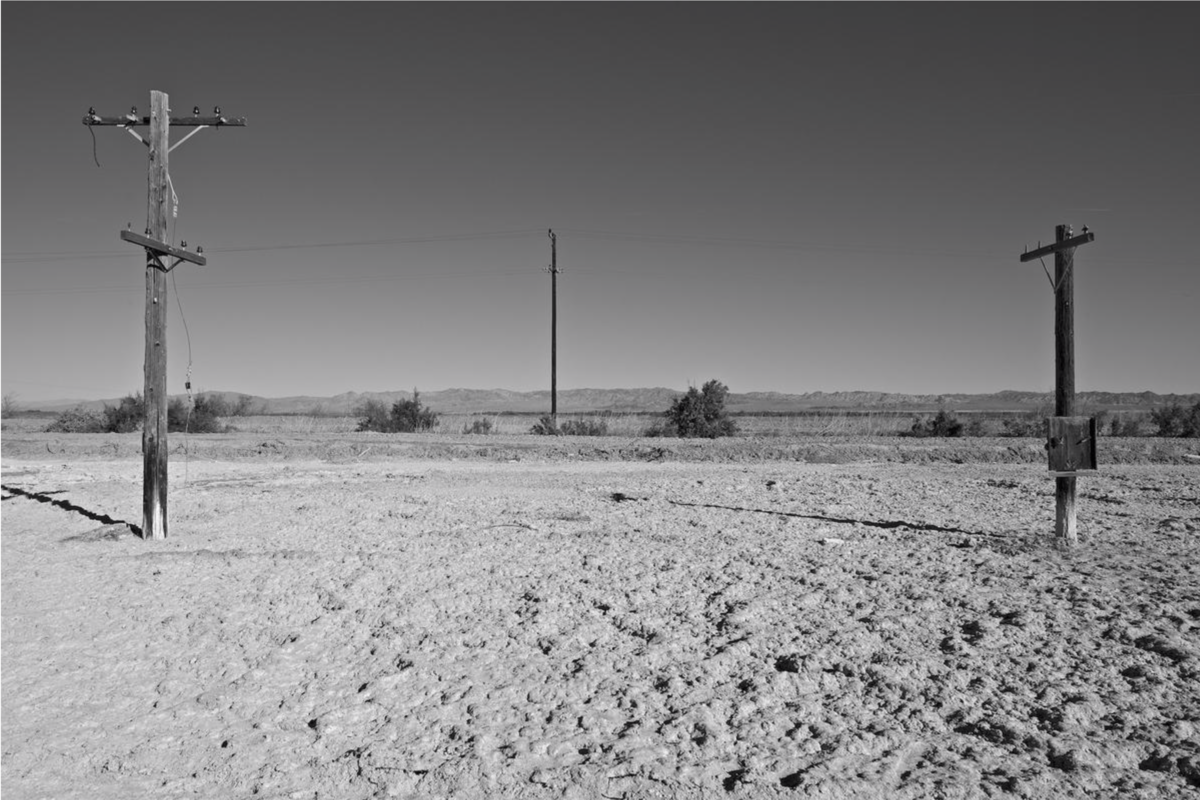 showing the mountains in the far distance. 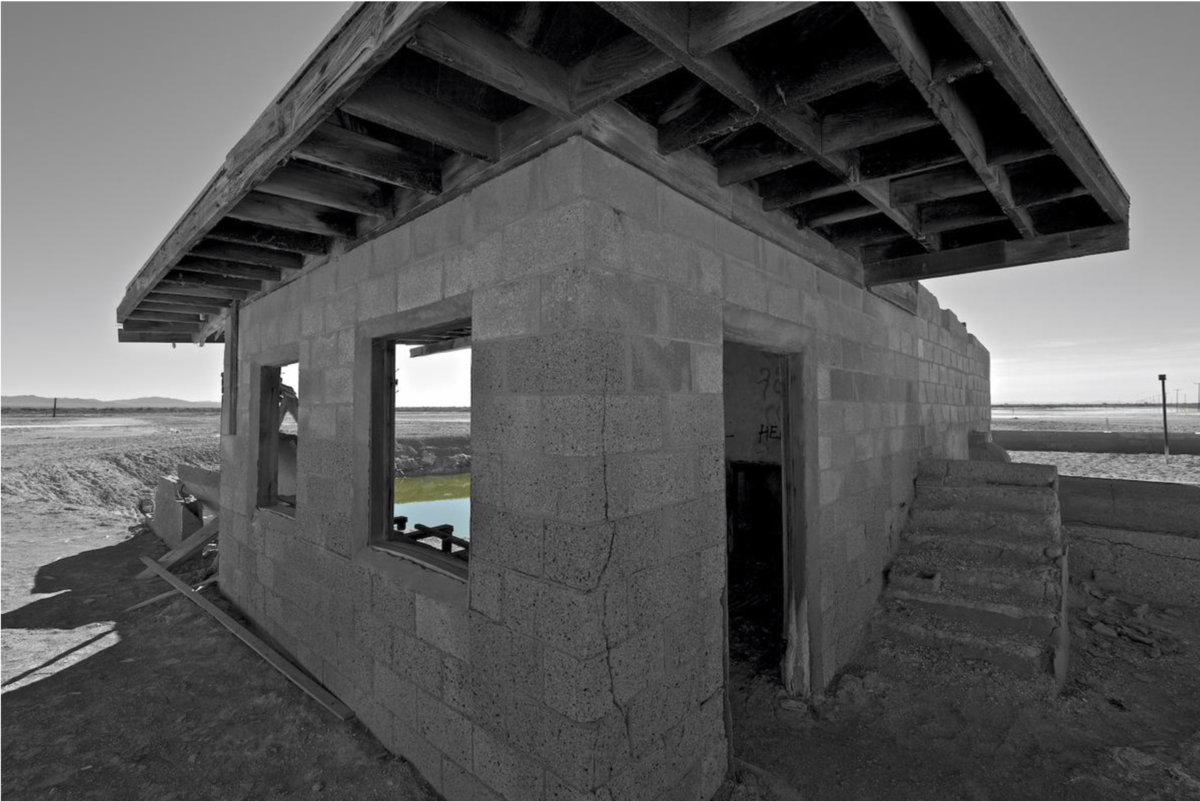 This photograph brings us to another abandoned structure, shot square onto the   pointed edge of the building, a clear divergence from all the others which were made as parallel plane photographs. Another pond coming up, seen through the window, is shown full frame next. 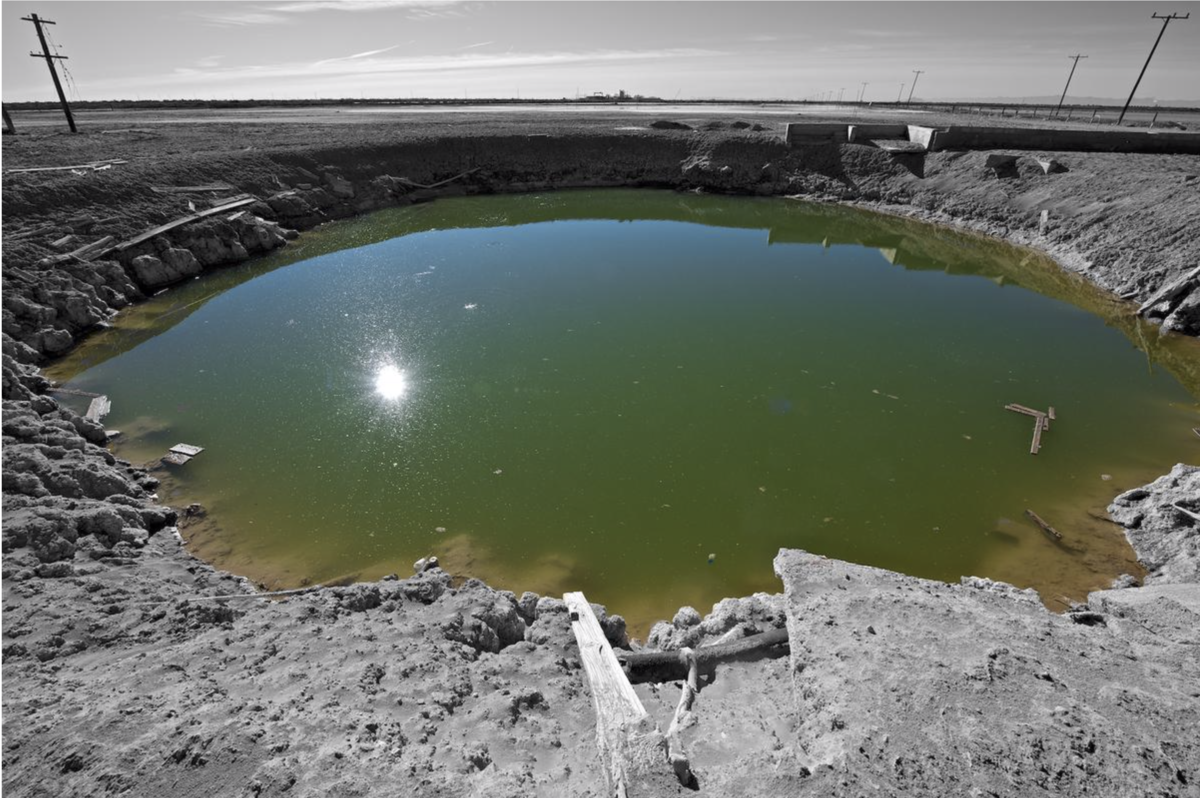 I think of this image as being the most brutal, as this pond filled with some unimaginable liquid that looks viscous, fills the frame.

Then next to the series only vertical, back to where we started from 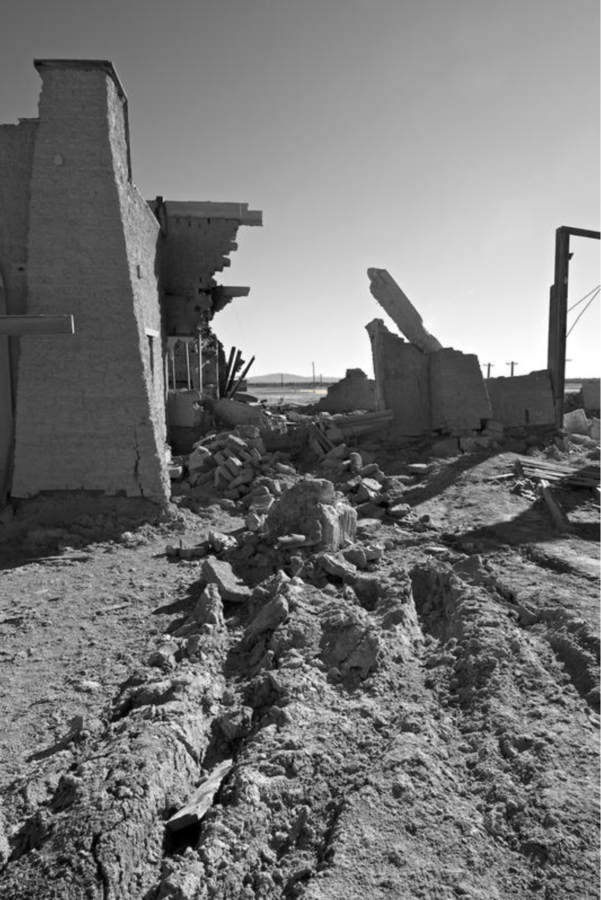 Then to the last two images in the series, when exhibited put side by side to each other, the same file printed twice: 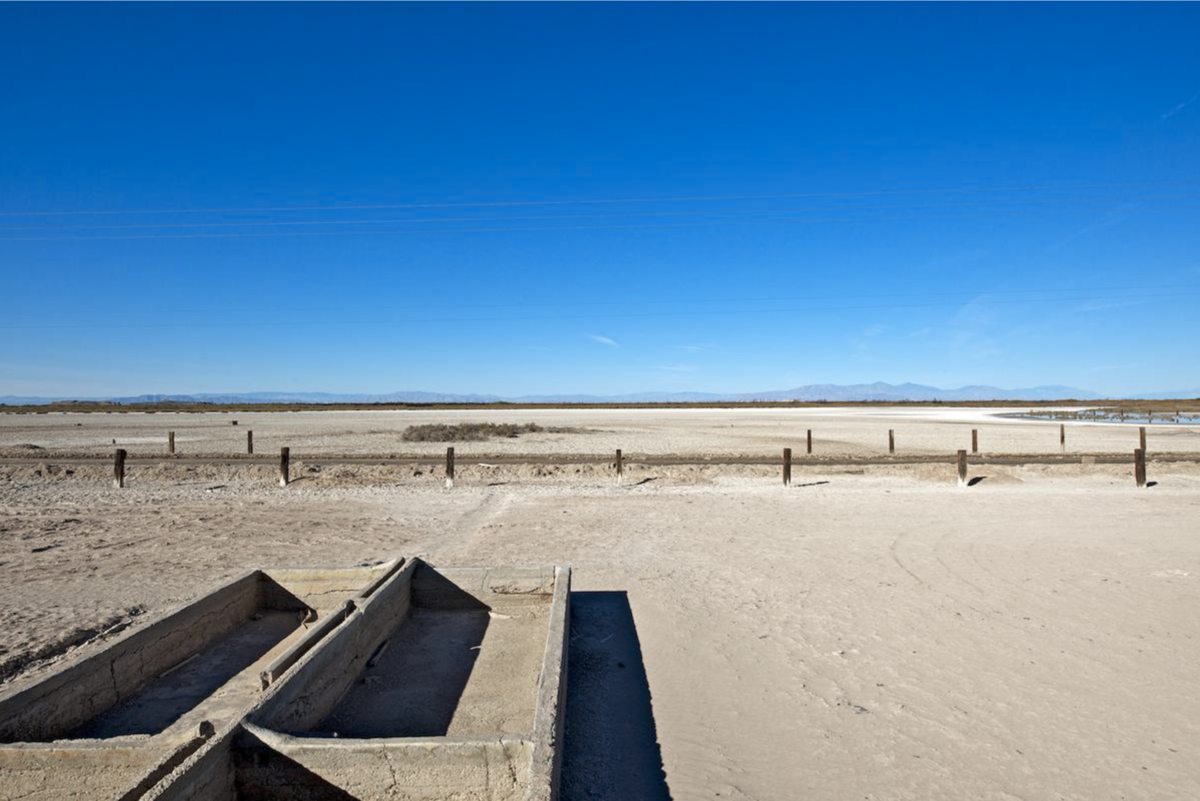 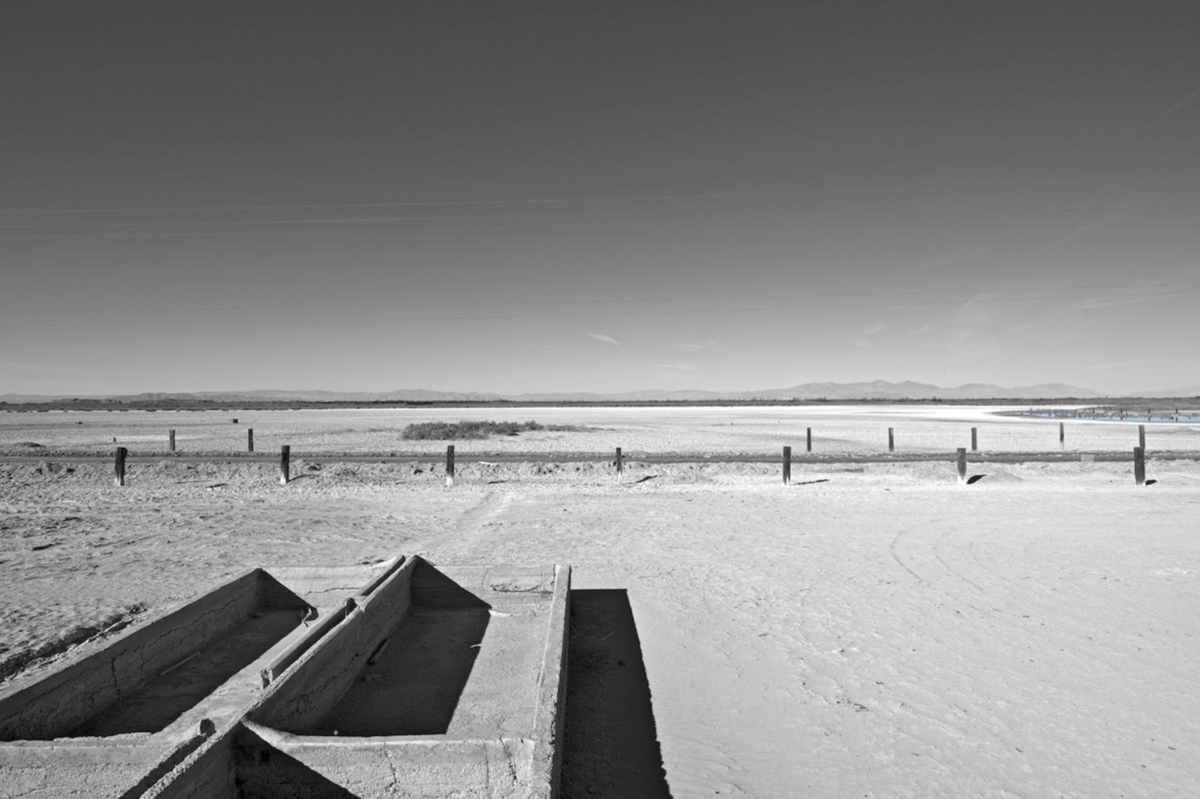 with the black and white image conforming to the rule that says water is color, over there on the far right of the frame, a judgement call on my part and not without controversy as some feel the print should be all black and white.

I didn't so much mind breaking my own convention as I wanted to try to prove the efficacy of the device I used.

By showing these two in this way I wanted to present the series as yes, from the otherworldy Salton Sea and its altered reality but also to drive the point home that I was using this work as a vehicle to make a statement about contemporary photography and how the rules ordering the use of color and black and white are no longer in effect. Photography has advanced in maturity to a "no rules" system where anything goes, much as all art has. So much of present-day photography either ignores precedent or its maker is unaware of what was made before or doesn't care.

On a more personal level, although often thought of as a conventional landscape photographer, I am not. In this case, I sought to use this place as a canvas. My palette is black and white and color. I've chosen to make my painting."Take em or make em", we say. Let your photographs come out the way the tools and technology choose or impose your own ideas and construct in your work.  Salton Sea is not a conventional landscape series of photographs for I am using where I was as a vehicle or platform for what I chose to do to it.

Color files turned into black and white with a little warmth added in. This is the second body of work to come out of the Salton Sea as I made the group http://www.nealrantoul.com/projects/salton-sea-ca-2012 last year.

I've produced a few bodies of work from the Salton Sea in Southern California. I'd suggest researching it if you don't know what it is. It is unlike anyplace I have ever been. Read more