I've been avoiding writing about Wheat, a series of pictures like none other for me, as I began it in 1993 and am still shooting wheat twenty years later. I think because it is such a big project it is hard to know how to start.  So, what I'm going to do is take a deep breath and just dive in and start at the beginning. This will be another multi-post series. Of course, readers may "opt out" at any point. I hope to be able to earn your interest throughout as I write about the history of the series and the many forms it has taken over the past twenty years. Some of you may remember that I've written before about the principle of returning again and again to the same material with a different mindset and Wheat is at the top of the list of this way of working for me.

For those of you who don't know how the project began let me start with that.

On a shooting road trip across the US in 1993 I was returning home to Boston from several rainy days in Seattle in complete frustration. I was working with an 8 x 10 view camera in those days and there is no way to do anything outdoors with that camera in the rain. I crossed the Cascade Range (which almost always brings  better weather), headed back across Washington, spent a night in Coullee (which is a wonderfully odd place and the topic of a future post) and continued east towards Spokane. About an hour west of Spokane on State Highway 2 the highway goes through some wheat fields that are very beautiful. Thanks to Google Earth I can show you what these look like: 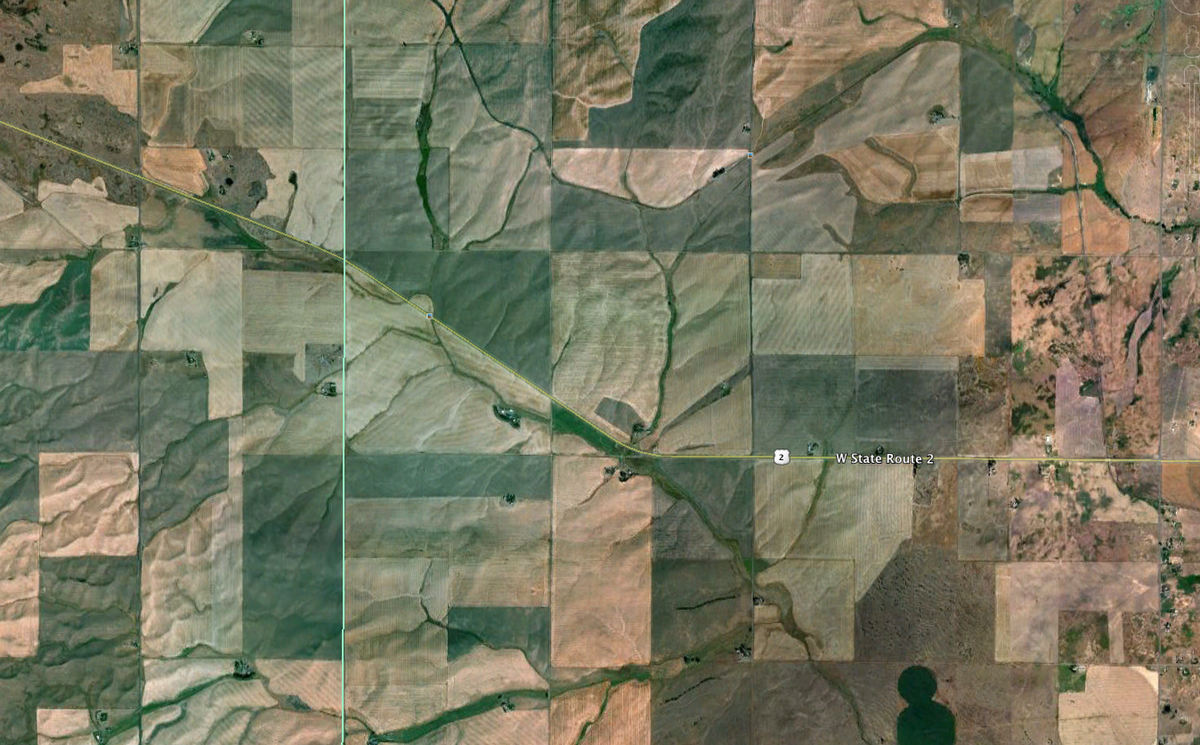 Sometimes Google Earth's color rendition leaves a little to be desired but you can get the idea. I only had six sheets of film left and was definitely in the mindset of getting home quickly but I stopped, shot the six sheets and made a note in my journal to come back to shoot more as it was really a very special place. 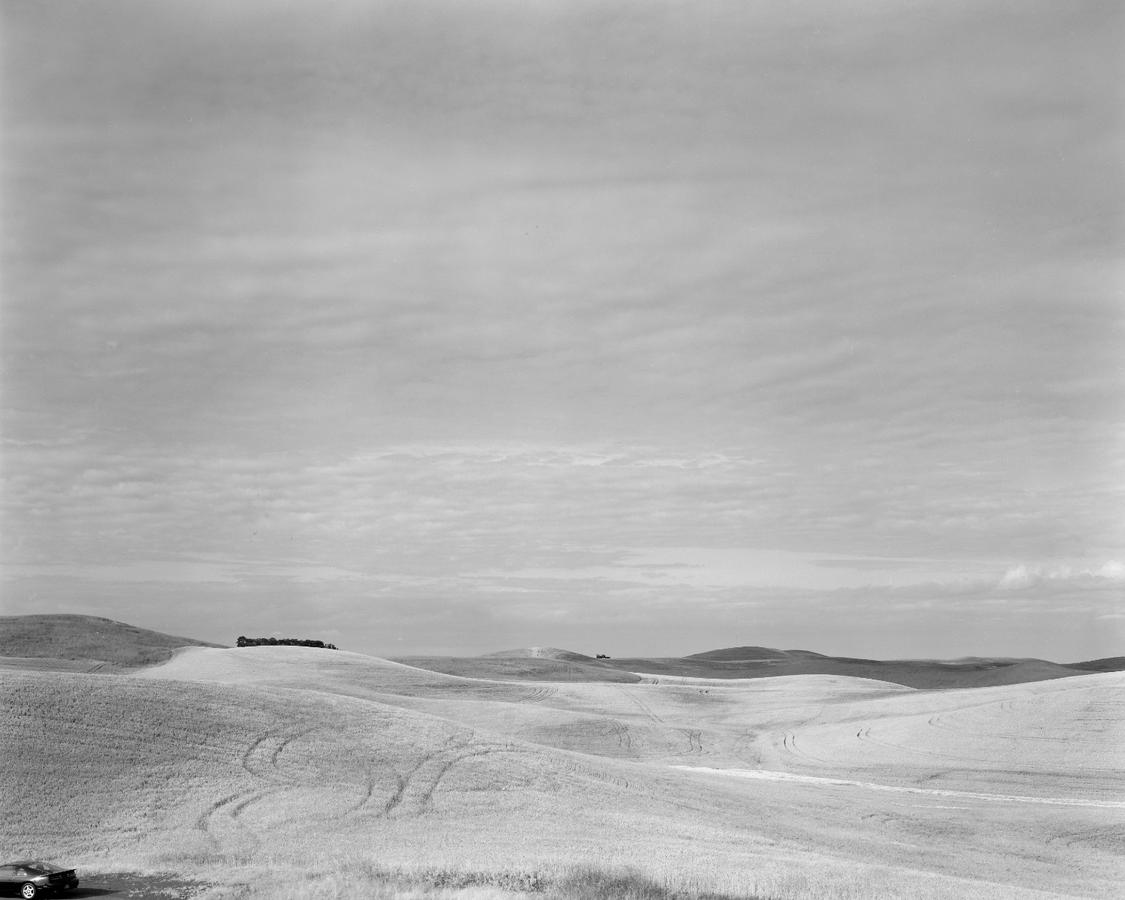 with my car in the lower left of the frame (a sure indicator that I wasn't taking the pictures very seriously but was taking notice of the area to come back to in the future). 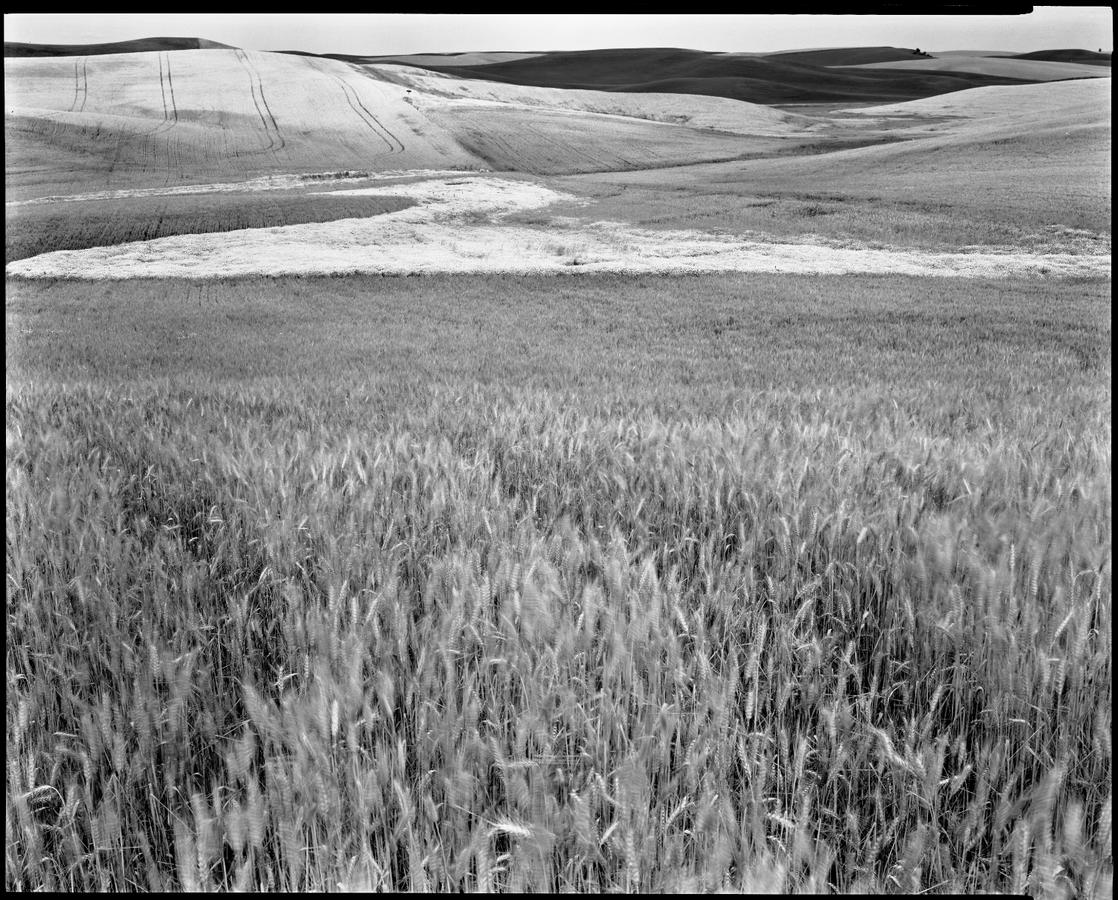 For the next several summers I was teaching in Italy so didn't get back out to photograph in Washington but by 1997 I decided to take a break from Europe and booked a flight to Spokane to try shooting wheat for real. I stayed at a bed & breakfast  in the city and for a few days headed back west on Rt.  2 to shoot. My routine in those days would be to shoot early, go back to where I was staying mid day, reload my film holders, rest and hang out until 3 or so, then go back out to shoot until the sun went down. In a conversation one day with the owner of the B & B I told him what I was doing and where. He asked if I'd ever been to the Palouse.  I said "no, what's that?" It seems amazing to me that I didn't know what this was and I do research places better now than I did then. He said it was directly south a couple of hours and was this major wheat growing country near Colfax and Pullman.  So I went, and, for me at least, the rest is history. I have photographed there almost every year since. 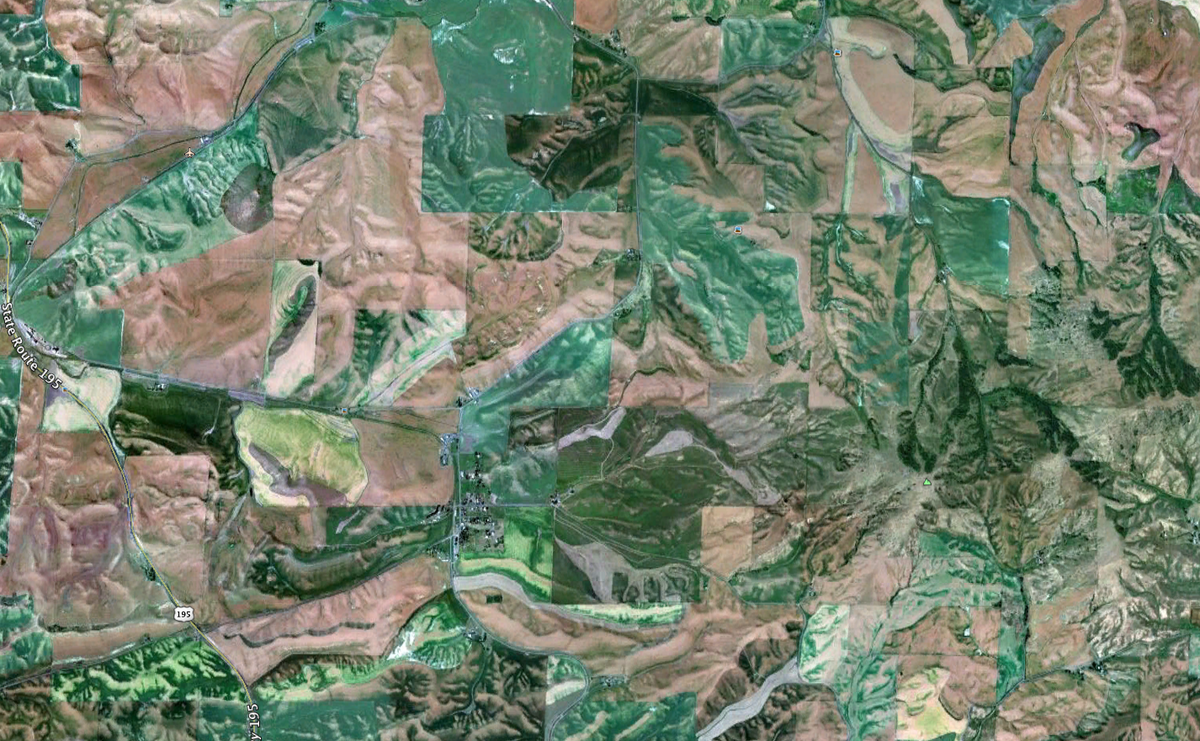 You can see that this is a much hillier and varied landscape than the area west of Spokane. 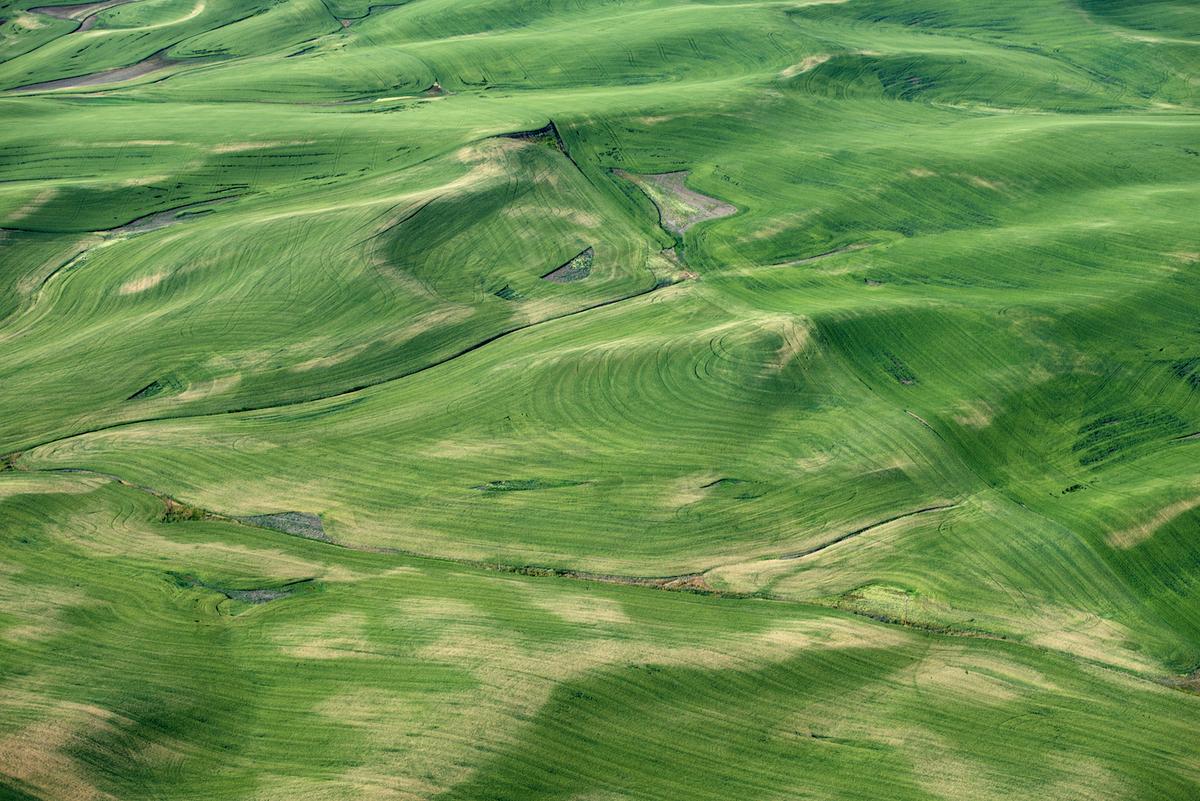 Here are a couple of the 8 x 10's that I took the very first year I photographed in the Palouse in 1997: 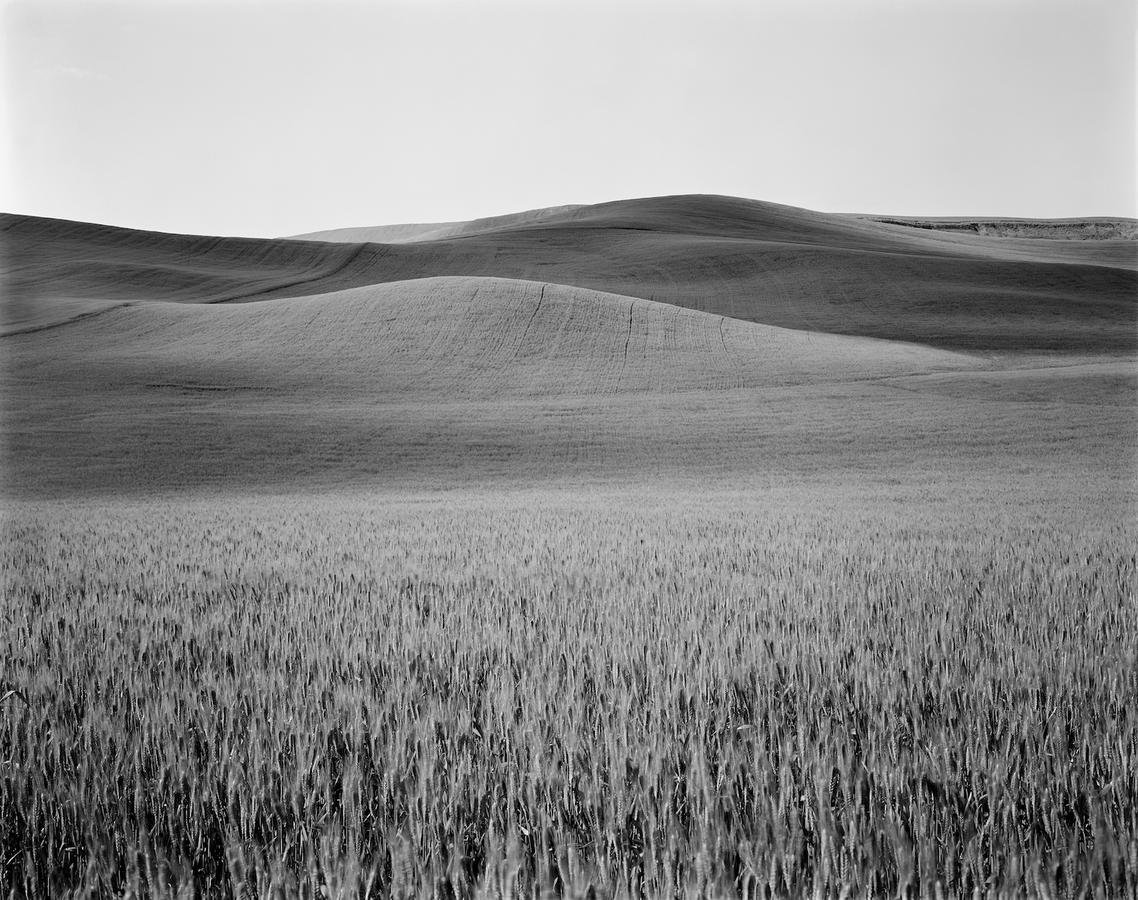 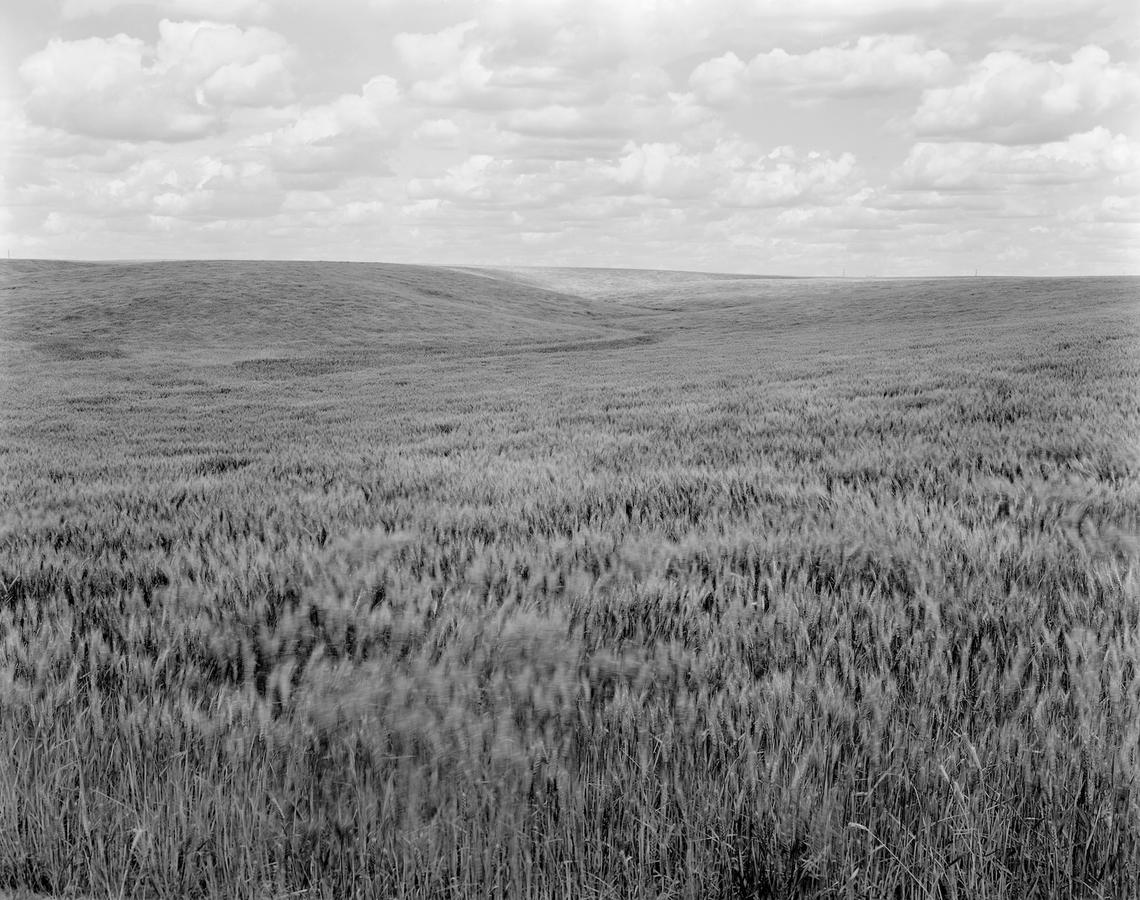 What is there about this large corner of the state that fascinates me so? I started out being consumed with the relative scalelessness (probably not a word but you get my drift) of the area in that something small, like a pebble in the foreground, could have the same visual weight as something big like a grain silo way off on the horizon. Being from New England, we very seldom have that level of openness. That was also why I was working in 8 x 10. The camera could convey the needed degree of detail better than any other. I also was intrigued with what happened when the scene was laid out using the Scheimpflug principle (explained well here by Wikepedia) so that the scene held sharpness from the closest foreground right out to the horizon without using depth of field. The ensuing photograph would have both sharpness and blur from the slow shutter speed I chose as the breeze blew the wheat. You can clearly see that in the image above (remember if you click on it it will get larger). Those first years photographing wheat I was still working only in black and white. 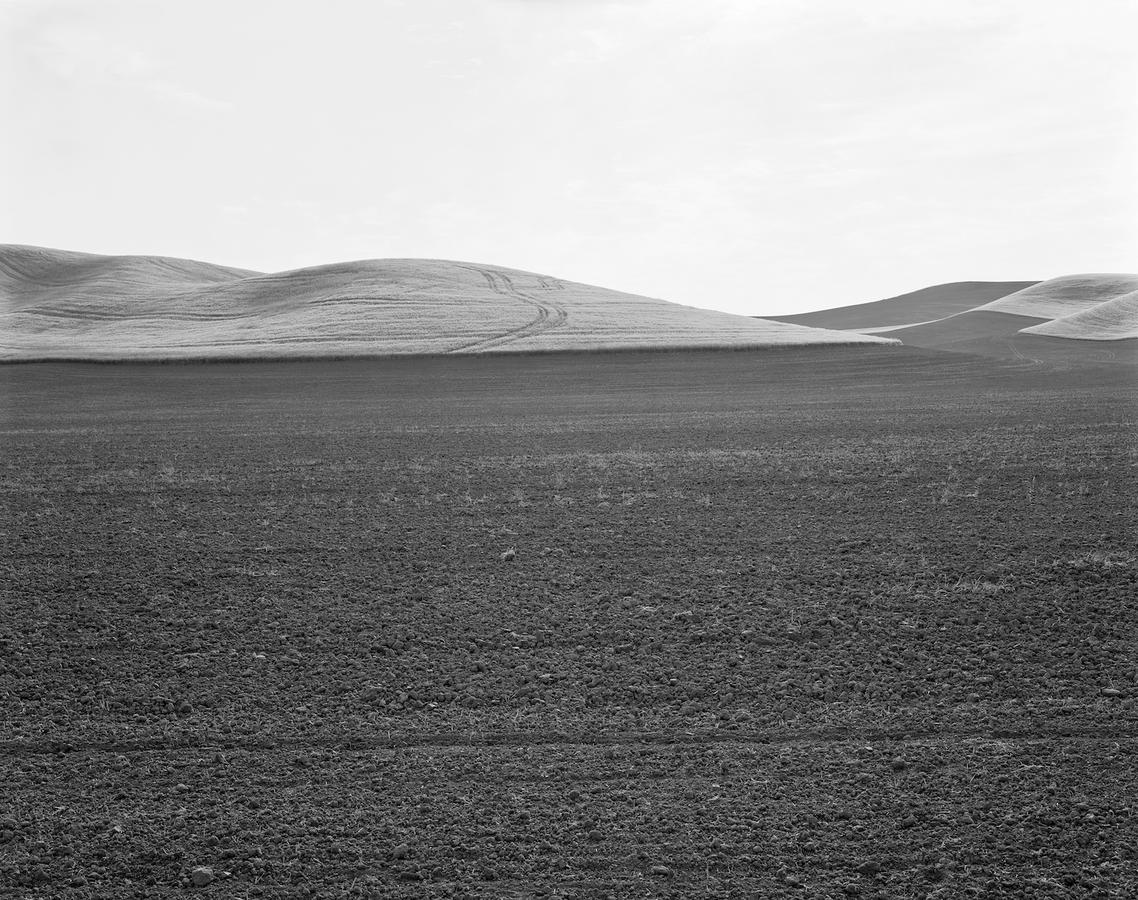 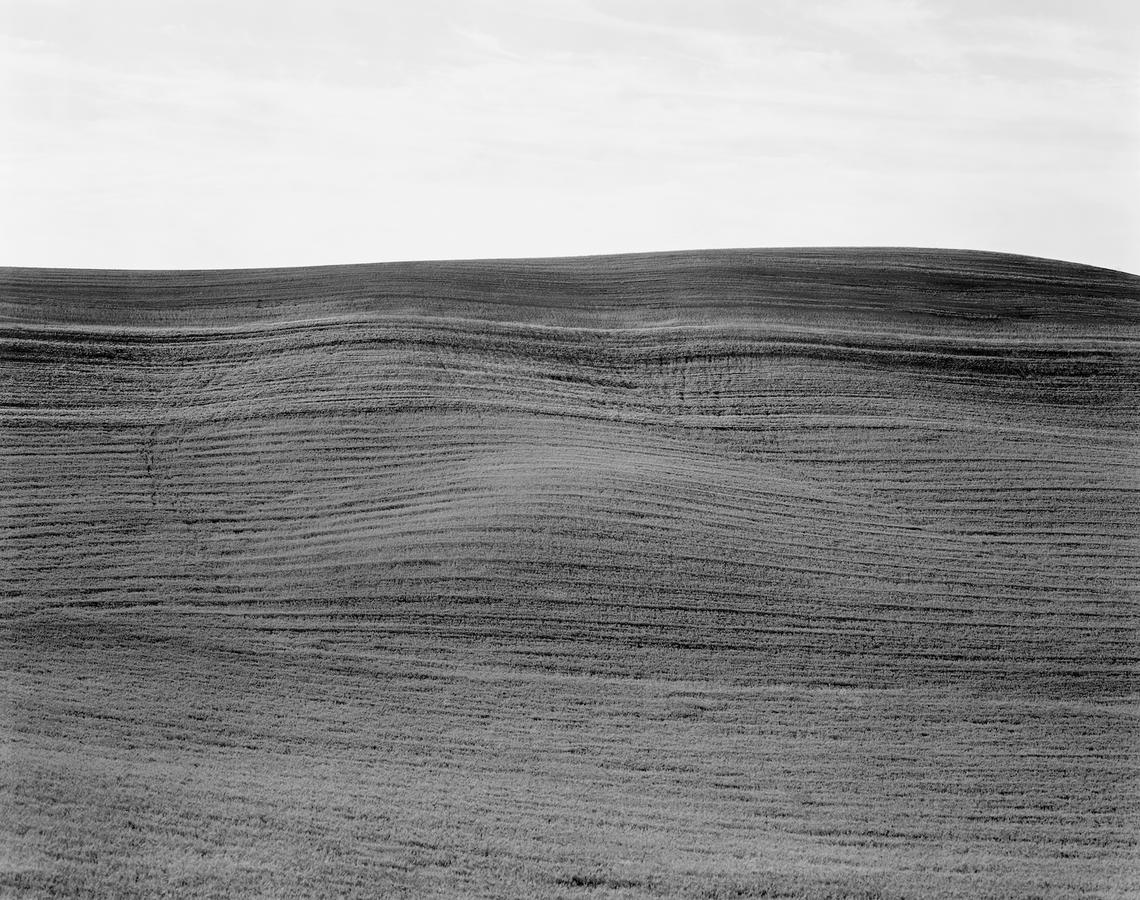 So, I am close to ending this first Wheat blog but need to fill out this section with what happened to the work I did the first year. 1997 was very early digital days but a local lab in Boston, Boris Color Labs, had just bought a first generation German machine called a Lambda made by Durst that could make large chemistry-based prints from scanned negatives.  I proposed to the lab that they make prints of 13 of the negatives I'd shot the summer before as the photographs were going to be in an exhibition at the Photographic Resource Center in Boston that spring. This way I'd get some very good prints and the lab could promote their new process. They accepted the proposal, a student of mine who worked at Boris made the scans, they then made the prints and framed them ready for exhibition. A few weeks later these 13 4 by 5 ft. images were hanging in the PRC's large hallway, completely dominating a members show.  I was very pleased with the outcome and very appreciative of the lab for their work on my behalf.

This early wheat work was represented in my black and white monograph, American Series published in 2006.

Next up in the Wheat series I will discuss starting to work in color for the first time in my career.