Pay Back. Revenge. Retribution. Condemnation. How sweet it is…..

Some of my fiercest fought battles were done by outlasting my adversaries. I could not beat Peter Serenyi at Northeastern, chair of the department, not while I was under tenure review. Behind a thin veneer of cordiality was a layer of mutual dislike. Early on I did have some knock-down screaming fights with him but I learned to hold these in check as he was irrational and I wasn't tenured yet. My motto: lay low and wait. He did retire, and when he did my ability to influence decisions towards positive outcomes for the photography program increased dramatically.

But, on to the story. This one takes place in Boston. In 1982 I had taught one year at Northeastern and was teaching each fall at Harvard. Things were going well. I was married, my daughter was born in December, we were renovating a house and I was planning a big move, which included dismantling two darkrooms: a color one and a black and white one, both with enlargers to handle 4 x 5 film, a Besseler and an Omega. The color darkroom I'd built for my wife so she could print her graduate thesis for MIT. It had a 20 inch color print drier that ran on a dedicated 220 line that could heat the whole apartment, and often did.

A former colleague from NESOP (New England School of Photography) named Steve Rose approached me with an idea to do a portfolio of my pictures. Steve taught photo history at NESOP . We chose a group of  2 1/4 infrared and conventional black and white pictures from Bermuda for the content.  I had made several trips to Bermuda recently and had work from there he and I liked for this project. I made the toned prints, 156 in total on 16 x 20 inch paper using Ilford's Galerie, which adds up to an edition of twelve with one artist proof. He was to do the rest. A special white box was designed and ordered, board was purchased and, on a very tight deadline, I made the prints that spring. It also was a very full summer coming up that year. I was working on a one man show to open in August at the RI School of Design Museum and I had prints in a summer show at Light Gallery in NY. I remember the printing for the portfolio as being brutal. Relentless, boring, monotonous; printing that many of the same image is always tough. They were also difficult prints to make as I was toning with multiple toners in those days. I remember I threw my back out printing that spring.

I delivered the prints to Steve on time, who lived and worked here: 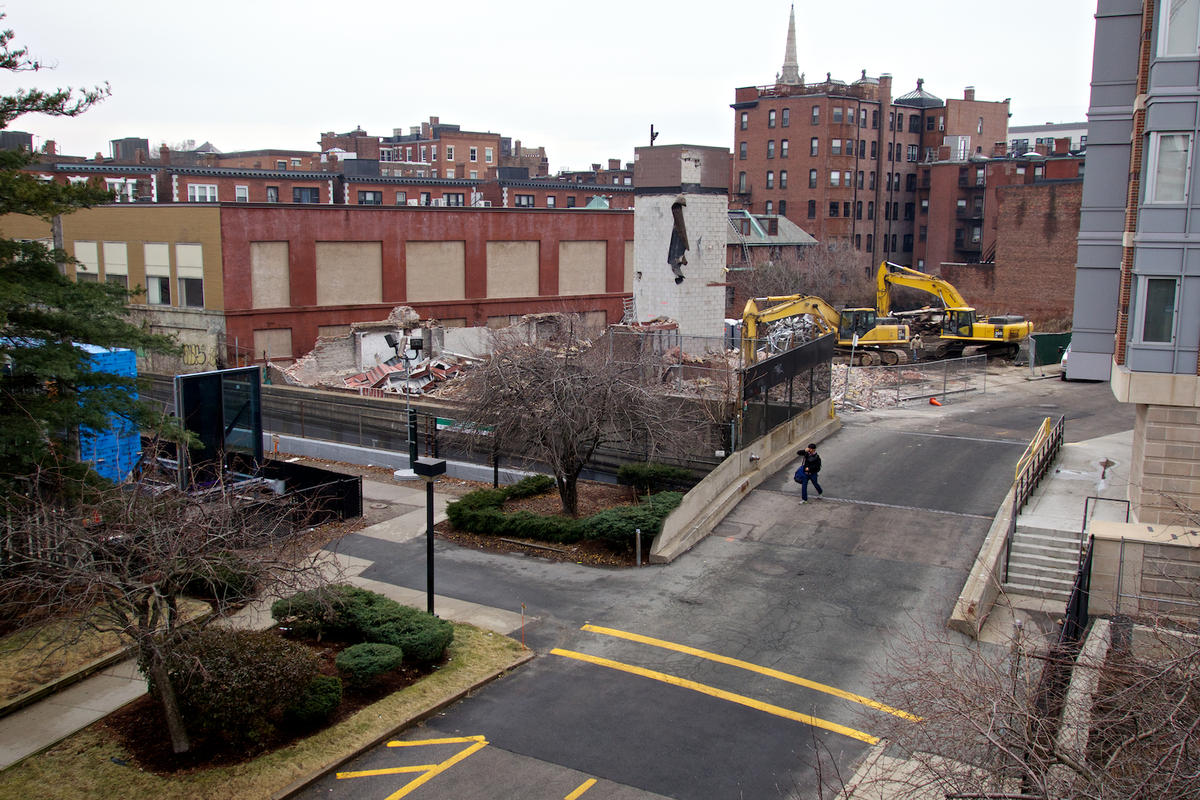 Wait a minute….lived where? There is no there there. Actually, I just made that picture a few days ago and yes they are tearing down the building where Steve Rose lived and where I delivered the prints.

I love that part where the kid says, "wait a minute" in the movie Princess Bride when Peter Falk is reading the story to him. It seems our young hero and his princess bride were kissing and the kid couldn't take it. All of sudden we're back to the kid's bedroom and his grand father is sitting there with the book in his hand. Stops the story right in its tracks.

I think of this picture as doing that, stopping the narrative in mid stride. Steve Rose's building is being torn down in January 2014 right in the center of the frame. If that means I can erase having to think of Steve Rose every time I go by there, then that is fine with me. But, let's get back to our story taking place in 1982.

As I said, I delivered the prints. Up to that point I thought we were good. Steve assured me all was well, the boxes were in and his crew were all set do the mounting, matting and assembling. A few weeks later I was about to leave for Europe when I got a call from one of Steve's crew that Steve was leaving town, that he wasn't coming back and that I'd better come over right away and get what I could of the portfolio as it all was going to be trashed if I didn't.

I did just that. I went over, got my prints, some of which were mounted and matted, the boxes and some extra board. Steve had gone by then. Calls to him were not returned. I never saw Steve Rose again. Lucky for him as I would've decked him. The guy hightailed it out of town with creditors on his tail. He owed everyone. And had lied to us all. To say nothing of a large project left in a shambles.

In the small Boston-based community back then of artist photographers, gossip prevailed. What a mess. What happened with Rantoul and Rose? I took off for Europe, relieved to be free of it for a while.  I came back to pull the portfolio together and, over the years, was successful in either donating it to collections or selling it. Two remain and the portfolio is in the permanent collections of the Addison Gallery of American Art and the Stiftung, which is the photography collection at the Museum of Art in Zurich, Switzerland. Plus, I donated a copy to my high school and several are in private collections.

Back to 2014, to Steve's place being felled by the wrecking ball. Finally, the bad taste in my mouth of Mr. Steve Rose is gone, along with the place I delivered those prints to a lifetime ago, 32 years to be exact. Good riddance to the building being reduced to dust and to Steve being long gone.

You might be interested in seeing what all the fuss was about. I will bring the Bermuda Portfolio to you soon.