In the post preceding this one (Short Story Long) I outlined how I blew it in a couple of ways when making aerial photographs of the tidal estuaries along the north shore at Crane's Beach, Plum Island and Hampton Beach. I failed to make sure the gyro stabilizer mounted to the camera was in fact on and it was really choppy air the day we flew.

After that first shoot when things were so disastrous I kept looking at the 300 or so files I'd shot and thought perhaps there was something else going on. I thought maybe I should test the lens for it seemed as though perhaps it was suspect. I'd made a picture while on the ground that day with that lens that wasn't very sharp. So what I did was to shoot pictures with that lens (the Nikkor 70-200mm f2.8) at four different focal lengths with the camera on a tripod, the mirror locked up and using a cable release. Then shot the same four focal lengths and the same exposure using the the Nikkor 80-400mm f/4.5-5.6G ED, also generation 2. Well, what do you know? The 70-200 started out pretty well at 70mm but fell down as it got zoomed out more and at 200mm it was just plain bad. Off to Nikon it went for repair the next day.

Why tell you all this? To ask you to be careful of your assumptions, to question myself and perhaps you as we all blithely carry on doing the same thing, working along the same way assuming that all is as it has been when it could as easily not be. The 70-200mm lens has been to Europe with me multiple times, to Iceland, to shoot wheat in Washington, to shoot in northern California, in the dessert in Arizona, had several trips to North Carolina, to Martha's Vineyard countless times and so on. Knocked about, used hard with me assuming it is as good as it was when new, probably 7 years ago. Nope. Not this time.

So, I went back up on Friday on a day that didn't look so good from the ground, as it was breezy and cool and we flew in the afternoon at 4pm , always risky as light is decreasing. This means raised ISO's and if the light is really fading, forced into slower shutter speeds and little depth of field.

What I got this time, using the 80-400 mm lens which is bigger and heavier and slower, with the stabilizer on the whole time, and what turned out to be a smooth flight with calm air and plenty of light was simply perfect. 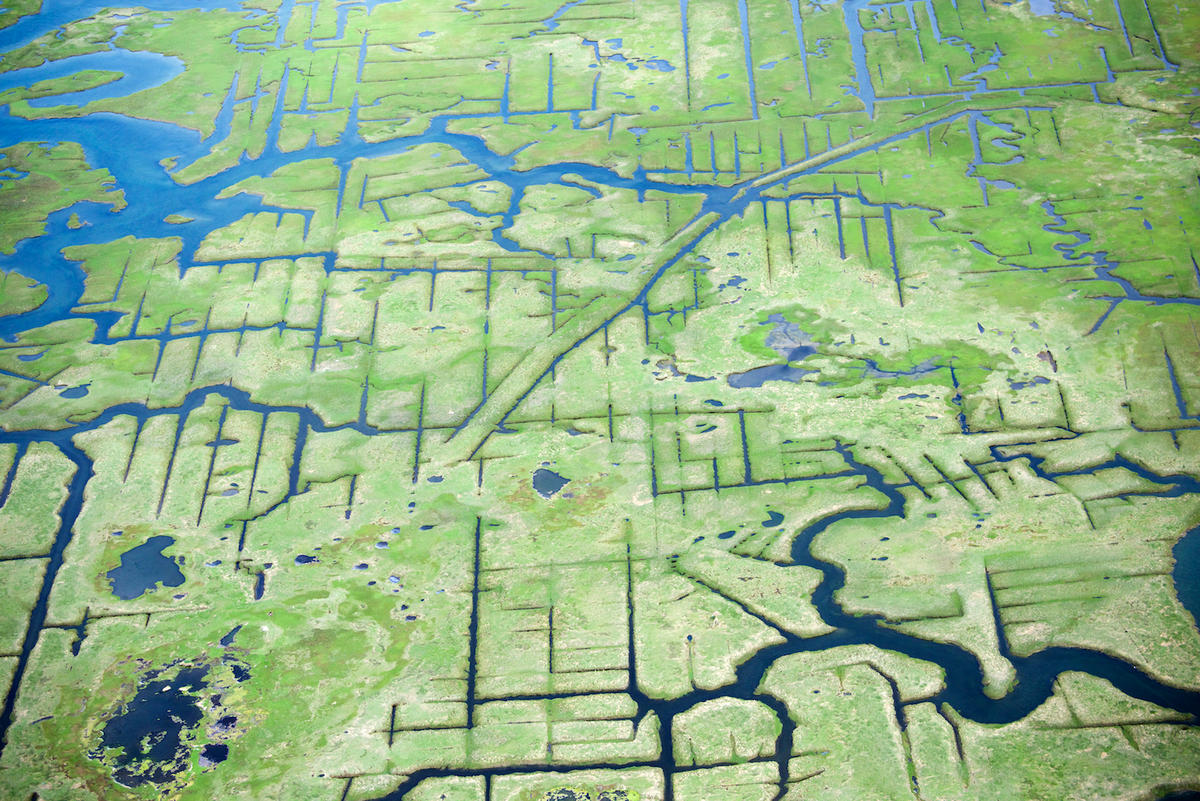 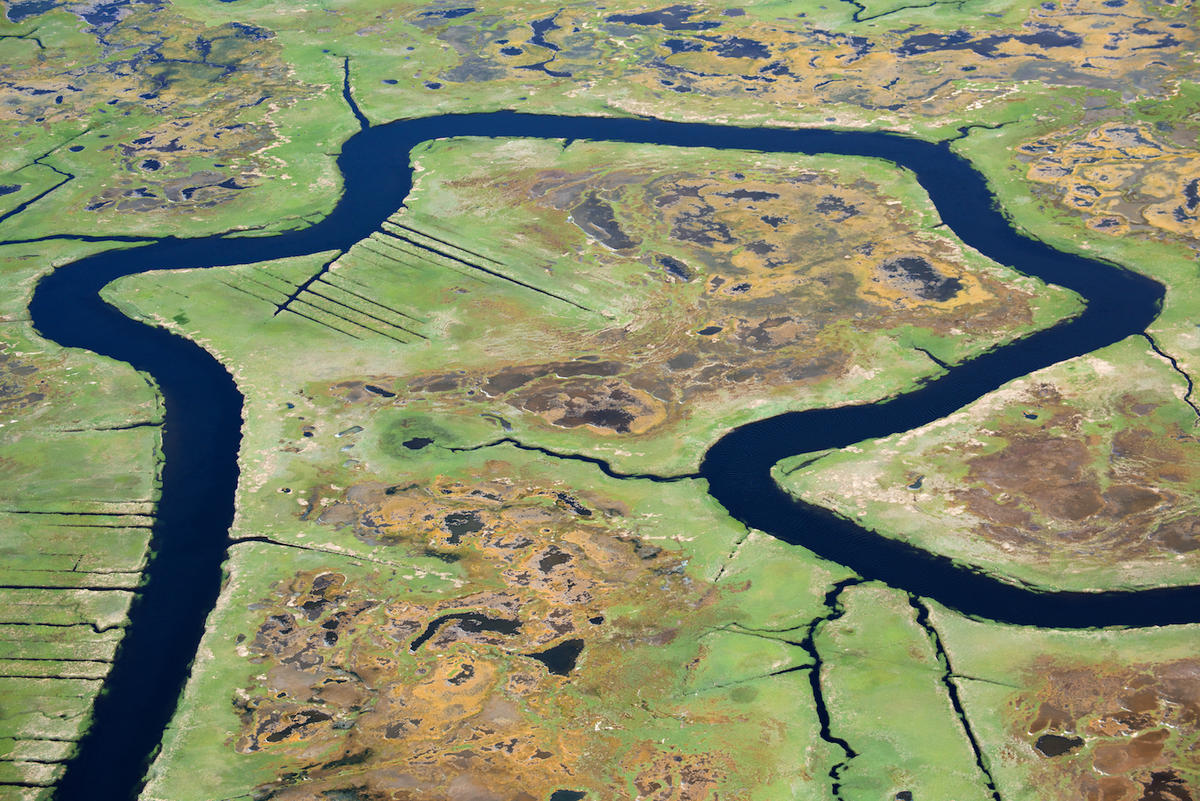 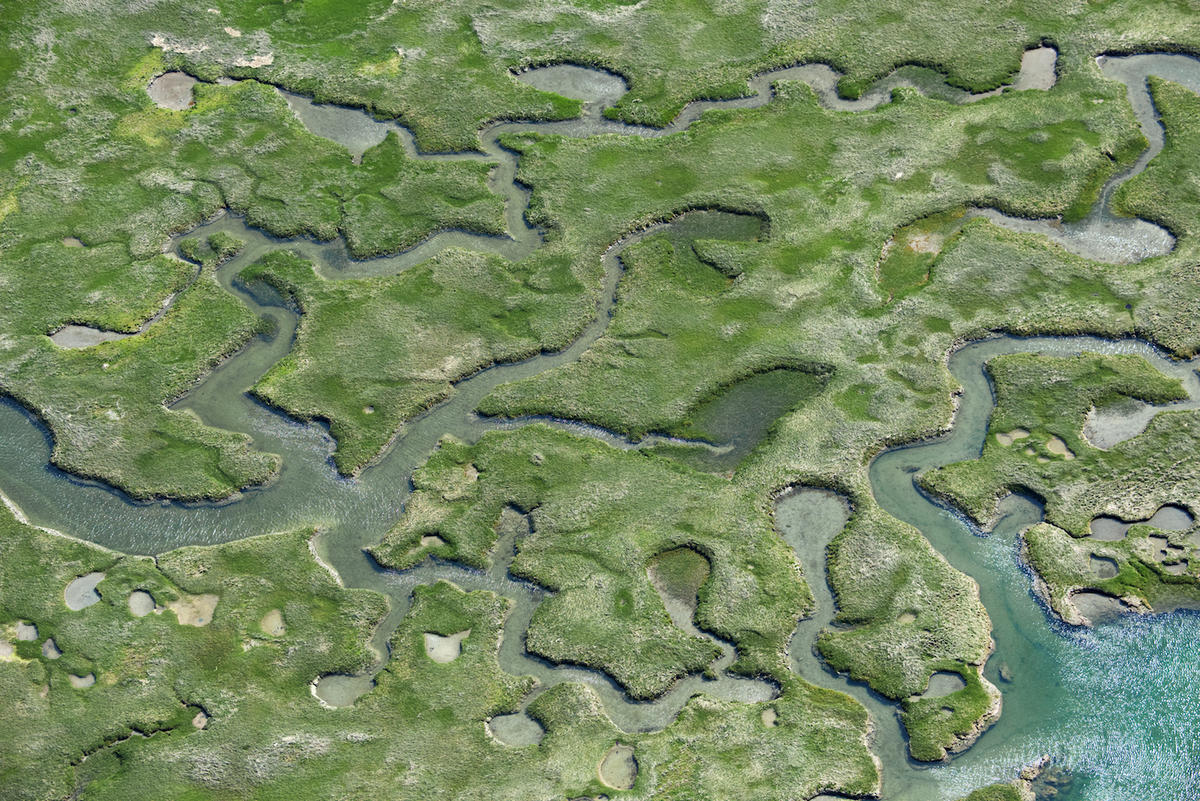 True arteries, bringing nutrients in and flushing old water out, as intricate and as beautiful as anything I've ever seen: 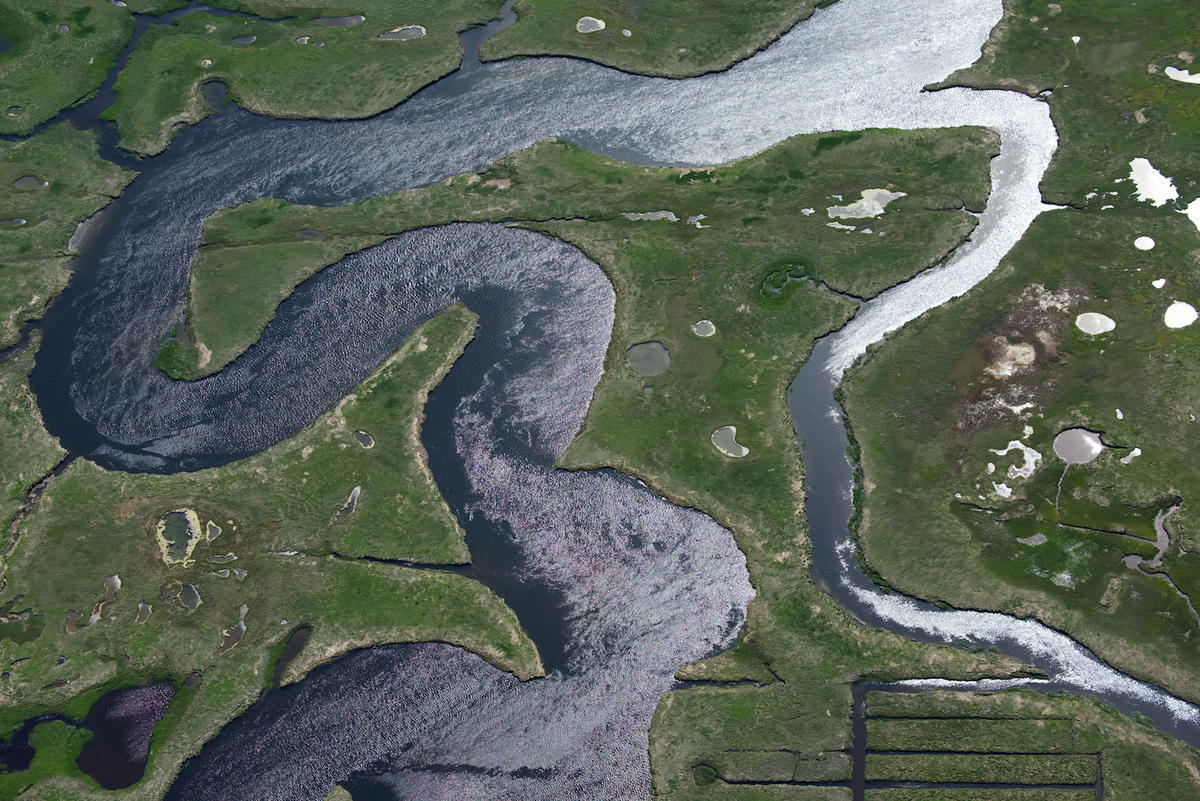 Sharp and clean and crisp in the rendition of detail, shot with a sharp lens held steady with the help of a stabilizer, that was in fact on, while on a smooth flight. Ahh. This was true redemption. 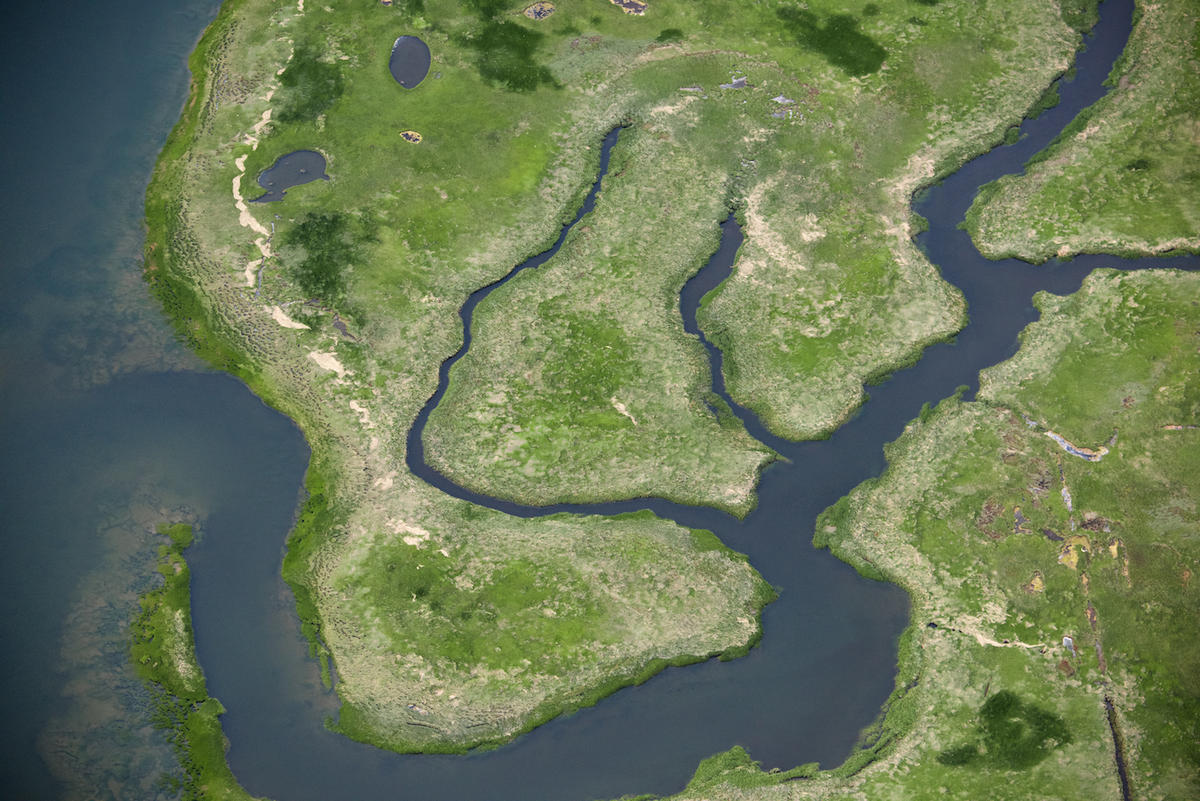 and the same image cropped and blown up: 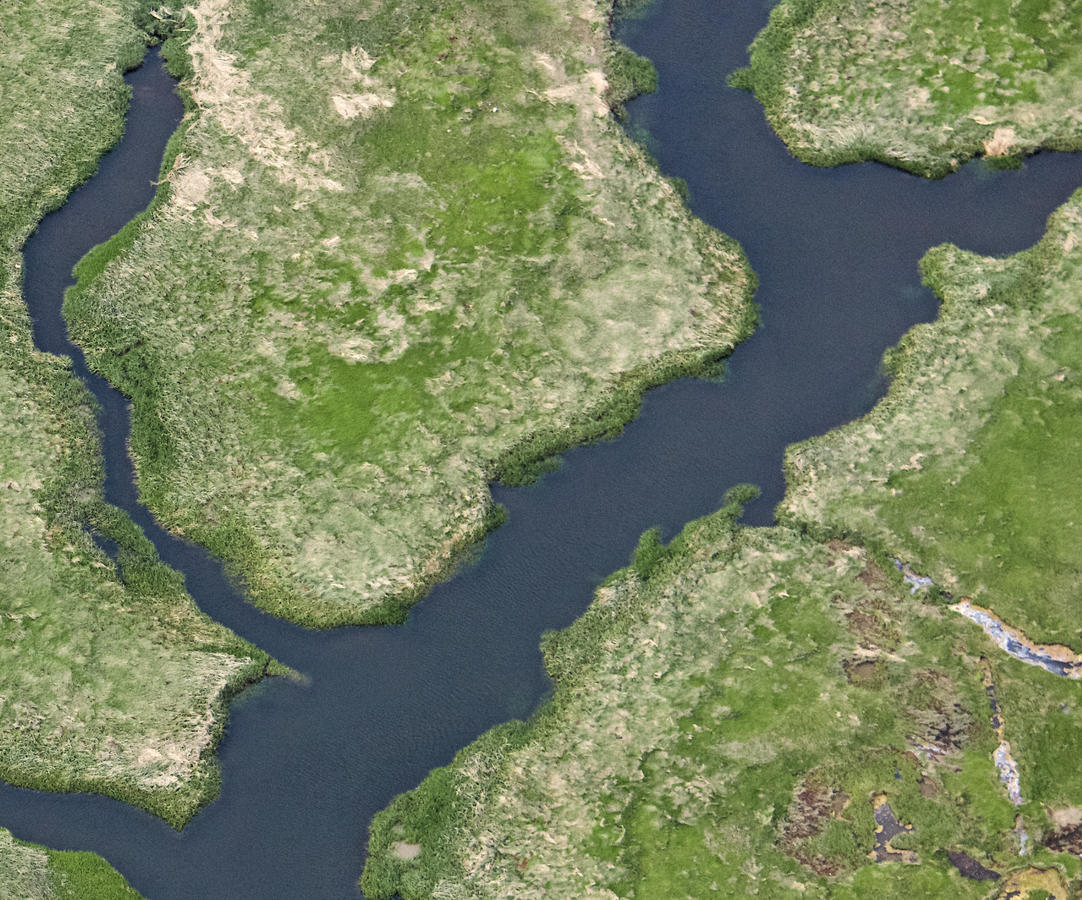 difficult to see at 72 dpi in a blog but it is good.

I said when I started this two-post-blog there would be redemption at the end and there is as the pictures speak to a final result that is fulfilling and rewarding, up to my somewhat over-the-top standards and that may be seen soon at 555 Gallery in Boston, held in the flat file cases in the notorious "back room" where there is real gold by many of us that show there. Tell Susan Nalband, the gallery's owner, you want to see the Mass Marshes project and we will make it happen.

Compounding screwups by an experienced professional? You'd better believe it. Several: the wrong focus setting, the stabilizer on the camera but not turned on, the lens being soft, all were definitely from me making assumptions that were wrong. The choppy air that first flight was out of my control.Would I have gotten what I wanted in flight number 1 if I hadn't had all those problems? Hard to say. Maybe. In terms of the lens being soft, watch out for what you take for granted. Things change.

BTW: I will put the full set up on the gallery page of the site soon. I just have to work the files a little more, make sure they're right and live with them a little as the edit needs to be from 397 frames down to a little under 20.

Made while living in Santa Rosa CA in the winter of 2014 these were made in the Sacremento River Valley  (Central Valley) near Sutter, CA in February when some of the fruit trees were in bloom.

Prints are on Canson Photographique Baryta and are 22 x 17 inches. Like to see this work? Please contact 555 Gallery in Boston, MA