So, now that it is really cold out (I am writing this in December in New England) and photographing outside is not so appealing I am printing work shot but unseen from the past year or so, including mining the five week residency in Iceland last summer for more work. You hope a residency will open some creative floodgates and the time in Iceland was major for me. But I also have been going back into my own deep past as a young artist when I was a student  in the early 70's.

The result will be a few posts over the next month or so but this first one will key on something I noticed as I've been going through this earlier work. It looks different. Not better, but just different. This, of course is due to it being made with film and printed in a darkroom.

I want to reference this with one photograph, a print I found in a stack of my own work, unseen for years. In the midst of a group of 120mm square format mounted prints was a smaller 11 x 14 inch print by Susie Hacker, now Susan Hacker Stang. I don't know about if or when you were a student but we traded a lot in those days. Like someone's work you saw while printing in the lab? Wish you owned something pinned up in the crit session last week? Trade for it. A print for a print. We did it all the time.

We used to do that with Aaron (Siskind) too, one of the teachers in the grad program at RISD. "Hey, Aaron, can we trade prints?" Unbelievably, he'd say yes. This was early enough in his career that he wasn't that famous or sought after yet. That would come later. I would trade too over the years as a teacher. I felt that if a student had the stones to ask me I would usually trade with them.

At any rate, I came across this print by Susan: 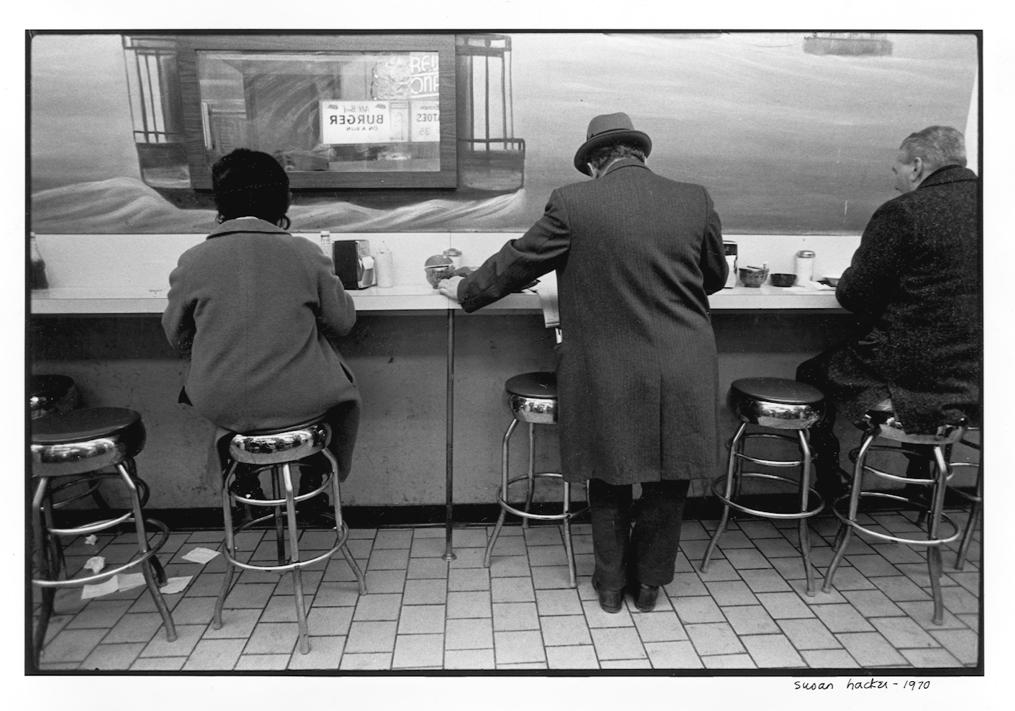 made in 1970 when we were both seniors at RISD. It's clearly 35mm and, if I knew the photographer back then, and where she was shooting I'd be willing to bet it was shot with a SLR,maybe a Nikon, a Canon or a Pentax K1000, or maybe even a range finder Leica as a few of us used them, with Kodak's Tri-X film which was rated at asa 400, and developed in D-76 for about 9 minutes, printed on Dupont Varigam or maybe Agfa's Brovira. It's a very good print, open in the  shadows with that lovely flat-yet-full look good printers get, with deep blacks where they belong below the counter and whites that are luminous without being harsh. We had good teachers in Paul Krot and Harry Callahan and Bert Beaver (yes, his real name) and we learned to print well. The picture pays clear homage to the work of Danny Lyon and Robert Frank in many ways, although Susan's is perhaps a little more empathetic in mood.

I was able to reach Susan and asked her for permission to publish her photograph. She said yes and sent this along as well:

The story is that this past September I was in New York and found myself photographing on Times Square, where this photograph had been taken back in 1970. It was, I think, a Hebrew National Deli or Diner, something like that, full of chrome stools and tile walls, really classic. Because Times Square is now so built up and built upon, it is hard to picture what among the cluster of new buildings were the actual boundaries of old Times Square. I was trying to locate where this diner had once been and asked two policeman (who had grown up in New York) if they could pinpoint the spot. They remembered the establishment, but couldn't figure out exactly where the location would have been. I then noticed a bit of sidewalk 'architecture', a certain curvature, and realized that I had found the location. Funny thing, it was a building that currently, for whatever reason, had a Marilyn Monroe poster on the outside. Different, but still classic.

The print struck me as a strong advocate of all that is film. Funny that this was the look then as we had no way to compare it to anything else and knew nothing of the impending and momentous change that would be digital. For my own work I was never much of a fan of 35mm. It seemed too small, too restricting in print size, too grainy and too soft. But in the hands of someone like Susan, miracles were made.

Sitting or standing at a counter, eating lunch in isolation from others doing the same thing, facing a dull stainless steel wall that failed to even reflect you back at yourself but looked like water with small waves rippling above the standing man's left hand. So cool.

Love photography and this use of it.

Susan has had, and continues to have, a rich career as an artist and educator. You may see her work at: http: Susan Hacker Stang.

Thanks, Susan. I have no idea what you got from me in trade but I can only hope it was this good.