People work in different ways, of course. Maybe you want to be off on your own, free with your thoughts and concentrating on what it is that you are working on. Or perhaps you want it all going on around you, noise and traffic and people everywhere.

If you're a photographer, part of the effort can be to be free from everything, as in a nature photographer working on the east slope of the Sierras after hiking for two days. Or, say you like the idea of shooting on the street in a press of bodies at Rockefeller Center in mid Manhattan on a weekend afternoon before Christmas.

Part of photography's appeal is its incredibly diverse circumstances in how we use it. From pictures of calving  glaciers on a once-in-a-lifetime cruise to Alaska to the family portrait at Thanksgiving dinner, it spans such a wide array of intentions, purposes and final results.

For our purposes let's refine this down to a discussion of the pictures we make as art (a very broad definition on its own).  And let's assume we are going out into the world to make those pictures. What comes to mind is the word "intention", at least it does to me. 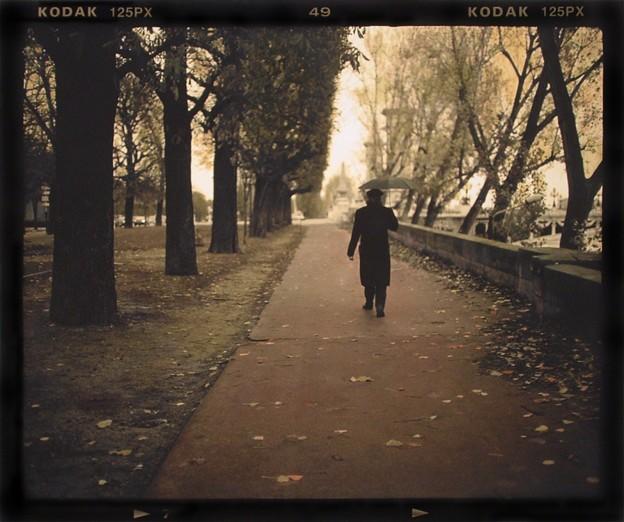 Photograph by my friend Gail Hill. Used with permission.

By that I mean going out to photograph with something in mind, be it a concept, or a place, or to acquire images to use in some way later, either in a darkroom or with a computer and inkjet printer.

With Gail's picture she used her husband Hal as a model, specified the long coat and the umbrella. Intention.

"What is your intention?" The teacher asks the student. "To go photograph" the student answers. "To photograph what?" the teacher asks and the student replies with "whatever". Feigned apathy in the face of a challenge to step up and take the initiative. I always felt if I could just get them out there, looking through their camera, that some kind of magic would happen. Often it did.

Isolation plays a big part here. Do you seek it or is it something unproductive in making art for you?

I play both sides, liking the chaos that crowds or busy places make but also liking the serenity of working alone by myself. I do find myself looking from the outside inwards. This is classic photographer /artist territory, of course. We are often "observers" standing on the perimeter looking in. Introverts. Where are you at the wedding reception? Mostly watching them all out there on the dance floor making fools of themselves or are you right in the middle having the time of your life?

Those newer to photography tend to make generic pictures. The key to more specificity, at least initially, is intention. Photograph some thing, I used to tell my students. So easy to say yet so hard to do.

I recently heard the photographer Lee Friedlander say that when he is out photographing he wants no project in mind. He just wants to see. Later, he might find a theme by looking through the hundreds or thousands of pictures he's made but at least initially, he isn't thinking about outcome, just seeing. There's a purity to that statement that I like. But we must also recognize who made it, an artist so tuned and so practiced in the highest possible form of seeing that it leaves those of us  struggling to make a good picture far behind in his wake.

For the time being, I'll stick with intention. This means having an idea, a concept, a precept, an inkling, a presupposition, a loosely defined aesthetic, a structure, a foundation, even a guess at what I am going after. I'll give in to the idea that this could get formed in process, on location, as it has happened to me before... take a look at Yountville on the site...here, but you've got to have something going on in that head of yours besides "that's pretty", "I like it"or, "maybe that will turn out to be a good one." Intro photo students were perfectly capable of giving me 20 or 40 frames of completely mindless dribble. How could no investment going in possibly create anything good coming out? It couldn't and it didn't. I was known as the professor that made students cry. It wasn't by design but it happened.