It looks like the vast majority of your photo series are "geographically driven". Do you travel to these places with the explicit intent of creating a series of photos, or are some of these series of images the result of places that you have "stumbled" across without any preconceived idea of creating a body of work?

This was a good question, as it made me think of past practice and then put it into the context of what I do now.

The answer is: both.

For all those years being based in Boston, working here and living here (Cambridge, actually) I made pictures locally and everywhere else too. Workshops, summer semesters abroad and sometimes residencies would fund trips with the added benefit of putting me someplace different. I remember years ago teaching at the Maine Photo Workshops one summer while Judy Dater was also there. We became friends and she said that the workshops were her way to be able to afford two or three weeks somewhere else. As I was a teacher anyway being in Italy or out west or in the South allowed me to shoot in a new place and to make new work.

However, I also took dedicated trips to places I wanted to shoot at and still do.

These are just a few of the trips I’ve taken over the years that were taken primarily to photograph:

-The cross country road trip to the Northwest in 1993 was exploratory until I came across the Palouse, the wheat growing region in Washington that has been a place I have returned to most years since then.

-Two big and long road trips to the Southwest to photograph in the 80’s.

-Several trips to photograph in Bermuda that resulted in a couple of shows and a limited edition portfolio.

-Numerous cross country trips, the biggest in 1976, in a motorhome.

-A trip up and around the Gaspé Peninsula in Canada

-A trip to Novia Scotia

-So many trips to Italy, Switzerland, England, Scotland and France, to many to list or remember

-Numerous trips to the Southwest

-A sabbatical leave a few years ago when I lived in Italy for a couple of months, had another month in Austin, Texas and another in Moab, Utah.

Some were complete unknowns photographically with a chance to discover what it was I could do and some were known and planned.

Of course the money question looms large. How did I afford all those trips? Often partly with my own funds but also most frequently on a grant, either from my university but also from other sources. Universities have funds set aside for their full time faculty to go to conferences or conduct research, for travel (in my case either $1000 or 2000 a year) and small grants called “Faculty Development Funds” and “Curriculum Development Awards” and “Research and Development Funds”. These were awarded yearly, had to be applied for several semesters in advance and ranged from $2500 on up to $15,000. I had a reputation in my school for being a heavy hitter with these over my years at Northeastern and had a track record of real success.

I was invested in these applications as they funded many many trips to make pictures. There were things I learned in my earlier years teaching at Northeastern and Harvard, but one of them was to write well and to organize my life enough so that I met the deadlines for the grant applications and to fill them out with a clear plan as to what I was to do and then to honor that plan if awarded. This may be stating the obvious but I was teaching to support my habit: photographing and making art. I was very committed to my teaching position and building the Photo Program at Northeastern but what I really loved to do was to photograph.

The odds were significantly tougher to obtain grants outside the university system, and partly because I was doing well internally, my applications for funds from outside sources were more sporadic. One large success was with the Whiting Foundation in the late nineties. This was a source of support constructed to provide funds for professors to conduct research away from their institution. My “research” was my photographs and I needed to go to Pullman, Washington to photograph wheat. The grant paid my way, put me up, paid for my rental car and food, and provided funds for film, paper, framing and exhibition costs. Done.

Okay, so what about now? Well, now is a little different since I retired in January 2012. Funny how that works but now money goes out but less comes in. Now there are more trips with photography at their core, more months away at all times of the year and I am picking places based upon the idea of photographing there and sometimes specifically because I have a project I want to do in a given location. Artist in residencies loom larger for me now as does workshop teaching. These two can provide ways to get somewhere and have the trip partially or fully funded. It is no coincidence that much of my new work comes from the South over the past two years as I have taught at Penland in North Carolina twice and had a residency in northern Georgia at the Hambidge Center.

Last year I went to Yuma, Arizona to live for five weeks, as I wanted to photograph the Imperial Sand Dunes a few miles away in southern California and the Salton Sea. I was able to get several more series out of that trip as well. This past winter I lived in San Diego for a month on the idea that it would be good to be on the coast and I could get back to Yuma easily (3 hours away by car) to shoot more Dunes and Salton Sea pictures. I didn’t do very well in San Diego shooting, although I tried. And finally, I took a trip to Italy in September, partly to visit and be with friends but partly to photograph the trees again outside of Trieste. That trip netted two new bodies of work: another “Trees” series, this time in color, and a” found” series called “Rivalta, Italy.

Lastly, do I photograph locally? Yes and no. Yes, in that occasionally I will go out to shoot near to home. I used to do this much more, take a day trip and drive around looking for things to photograph. 8 x 10 supported that as I wasn’t usually tying to make pictures in series with that camera. And many series have resulted over the years from either day trips nearby (Peddock’s Island in Boston Harbor as an example) or overnight trips to places like Portland, Maine or Nantucket.

I do believe that photographers need to photograph, that we need to be looking through a camera frequently, that with practice we are better and that fluency with the tools of our trade lets us not think about them and work on the harder part: making a good picture.

Remember that the reader said:

It looks like the vast majority of your photo series are "geographically driven".

If you photograph mostly outdoors and depend upon the content in your pictures to lay the foundation for the statements you will make, for the light to define and modify the color, for the time of year to influence the outcome and for place to be essential to your results you too would find yourself going to as many different places as you can.

Harry Callahan, one of my teachers, said this very beautiful thing that gave me fits for years trying to figure it out. He said, “The subject is everything”. As I grew and learned and accrued more experience I knew what he meant and it was that he was humbled by the fact that he was completely dependent on the world for his pictures. It was his way of giving thanks and about as close to a religious statement of faith as I ever heard from him.

This is good. Questions are coming in. I only hope I can answer them in a way that relates to as many of you blog readers as possible.

In my last blog post I asked readers to hit me with questions. I got one back so far:

Tell me about your photos, or the majority of them, which don't include people. I remember a shot across a parking lot at the back of a box store. There was a shadow, (yours) of a person. I thought it (the entire photo) really spoke to a sense of loneliness in the age of commercial meaningless glut. That people had been reduced , by commercialism, to a shadow. You took it out. What was left was a beautiful , architectural space. Your thoughts?

The reader caught me in a discrepancy.... a frame where originally the photograph showed my shadow as I made the picture, then later, changed as I put in the same image with my shadow removed. 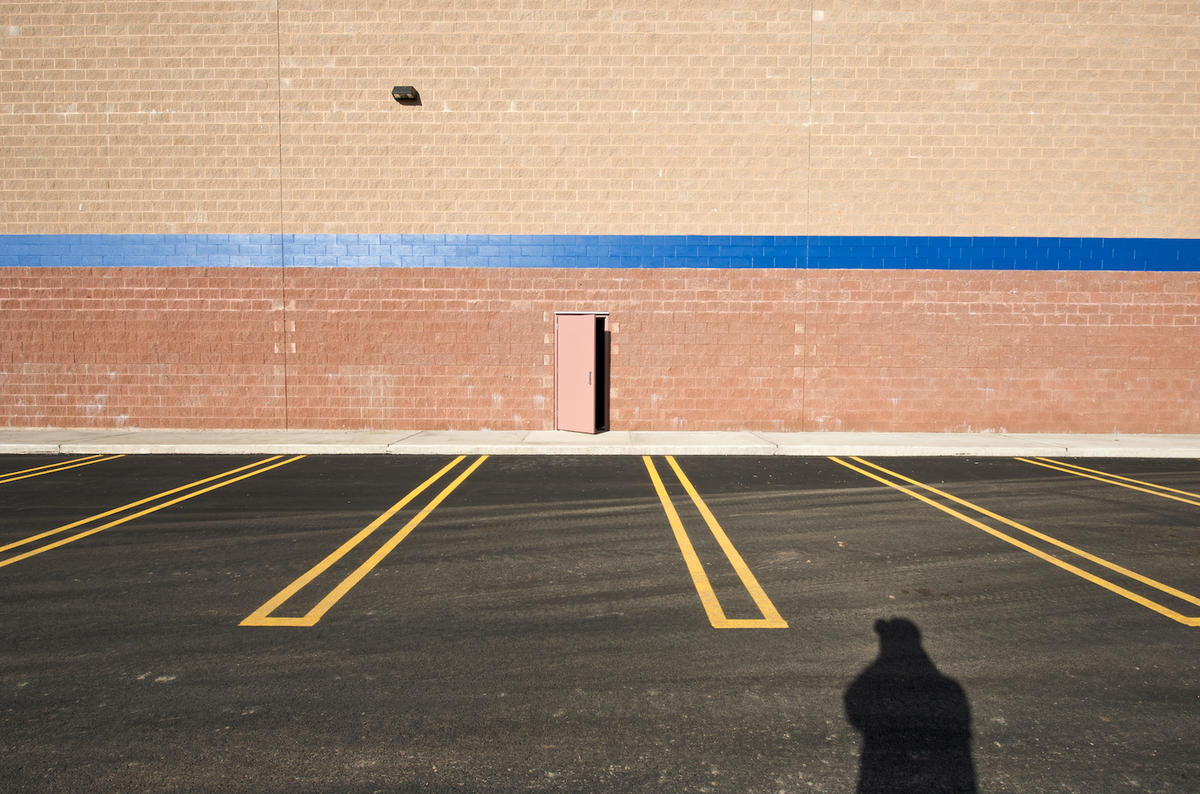 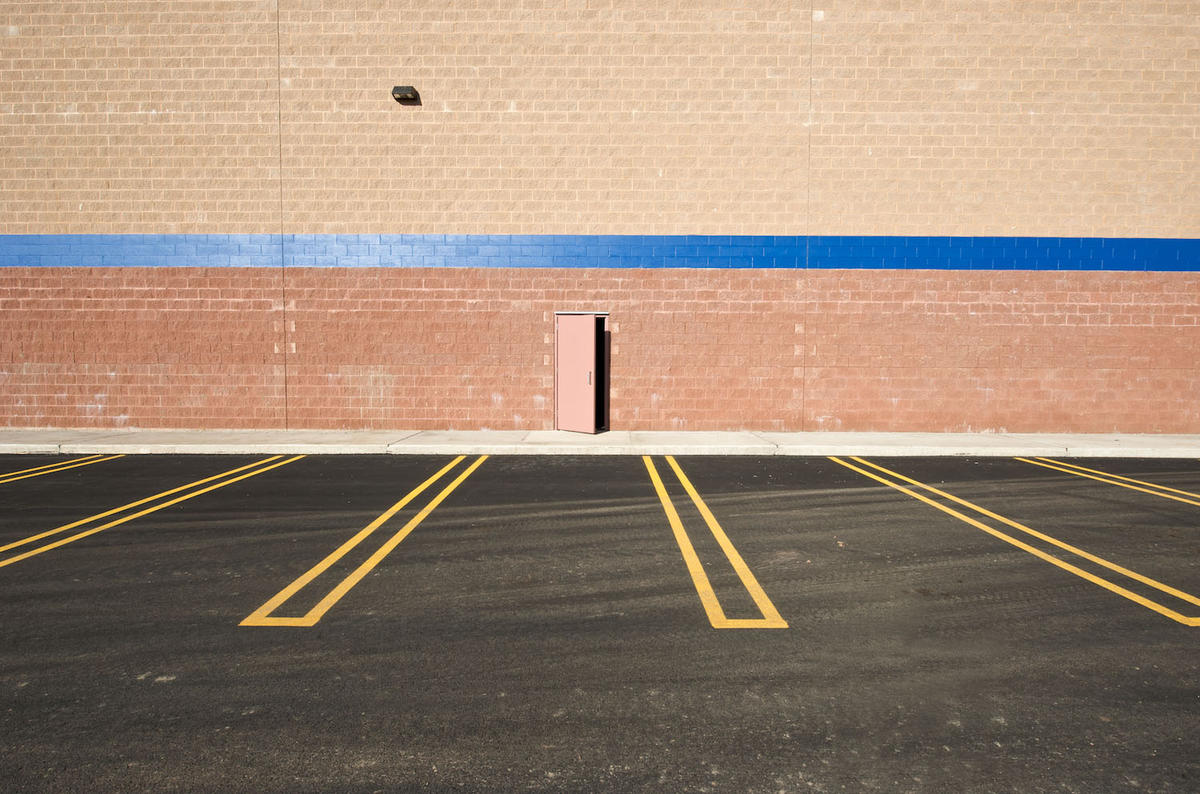 I think it was probably this photograph the reader referred to.

I'd like to give more weight to this than than it deserves but it just isn't so. It is well known among photographers that if you shoot early or late on a sunny day with a wide lens with the sun at your back, you've got your own shadow to contend with. Many of us will go to great lengths to disguise it or eliminate it. Before digital I would sometimes make the picture with my shadow in the frame because I thought the picture was important enough to what I was doing. I would also allow the shadow to stay in if I felt the reflection back on me or the photographer was essential to the picture. But in truth, had I had the ability to remove it the way I do now, most of the time I would have wanted my shadow eliminated. Now, of course, it is easy.

There is certainly a bigger issue the reader points to and that is why doesn't Neal Rantoul photograph people? Actually, I do, just rarely. Many of the Car Show pictures have people in them, I photograph many dead people (Mutter Museum and Reggio Emilia series) and dead animals too (Cabela's). But portraits? Only once. In 1987, in response to the growing AIDS crisis, I photographed PWA's (People with AIDS) in a project collaborating with the Polaroid Corporation to increase awareness of the issues and to give a face to the disease. Polaroid purchased many of the 8 x 10 Polaroid prints for their collection in the 90's.

This is good, my experiment to see if you would ask questions has netted a great question. And just this morning I received another, which I will get an answer when I return home and can find the the photographs the reader asked to see.