Those of you that know me know I studied at RISD (Rhode Island School of Design) with Harry Callahan. I also spent my two graduate years studying with Aaron Siskind as well. I transferred into RISD as a junior, finished with a BFA in Photography in 1971 and then continued on in graduate work graduating in Photography in 1973 with an MFA. My longest running friendship from those days has been with Henry Horenstein, who also came to RISD as a junior and stayed through graduate studies. Henry teaches at RISD and is a fantastic photographer and author of many many books: Henry Horenstein

Harry Callahan was a complex and wonderful person, difficult to fathom for someone as young as I was but a strong influence for a student so excited by making pictures and a powerful example and mentor. There are many stories and remembrances about Harry, both during the time I was a student and after as well. But I will restrict myself to two. This post will share one of them.

The first story about Harry is when I was about six years out of school. He and his wife Eleanor still lived in Providence in 1979 and occasionally I would go down from Cambridge, MA where I lived to see them. In the summer of 1979 I had traveled to Europe, not for the first time, but for the first time to make pictures. I started in Germany, drove through Paris to southern France, flew to London, drove up through England to the highlands of Scotland north and west of Edinburgh. I was working in black and white, shooting with a single lens Rollei SL66 with Kodak's Plus- X film and in infrared using a 35mm Leica M3. I had a wonderful time, no big surprise. I shot a lot and came back to begin processing the film. That fall I was teaching both at New England School of Photography in Boston and Harvard University so was pretty busy but when I had time I would go into the darkroom in my apartment, develop some film and begin making 11 x 14 work prints of some of the things I'd shot in the summer.

I remember I couldn't make much sense out of what I'd shot. There didn't seem to be any logic or cohesion to what I'd done that I could see. But I carried on and by Christmas break I had now amassed several boxes of prints all with the same problem: no substance. Now I was concerned. What did I do? I called Harry and asked him if he'd mind me coming to Providence to see him and could I show him some work? He said, sure, come on down.

When I met with him at his house along Benefit Street we covered some pleasantries and did a little catching up and then I told him what my problem was. He looked through the box of prints that I had brought.  I told him I couldn't make any sense of what I had. He seemed to understand this right away and then told me he'd had the same thing happen to him. In 1957 Harry had traveled to France for several months with Eleanor to photograph. When returning he had the same problem. Too overwhelmed by the new, too out of sorts compared to where he'd come from, the place too foreign to assimilate, not there long enough to get in it and understand what he could do with it. I certainly didn't have a clue I was making such a scattered group of pictures in Europe in 1979. I thought I was just continuing to photograph as I knew how to. Wrong. I went home that day severely humbled as I knew Harry was right. I  hadn't made anything worthwhile except to succeed at making pictures of things I hadn't seen before through first impression. Substance? No. Was I saying anything in the pictures, telling a story? No. Thank goodness I learned this lesson early in my career. I never did anything with all that work, never final printed them, never made portfolios, or took them around to museums and galleries to get them shown. Hard pill to swallow but a very good lesson.  I see this very often today in other's work when I review portfolios: making pictures from trips is very dangerous. 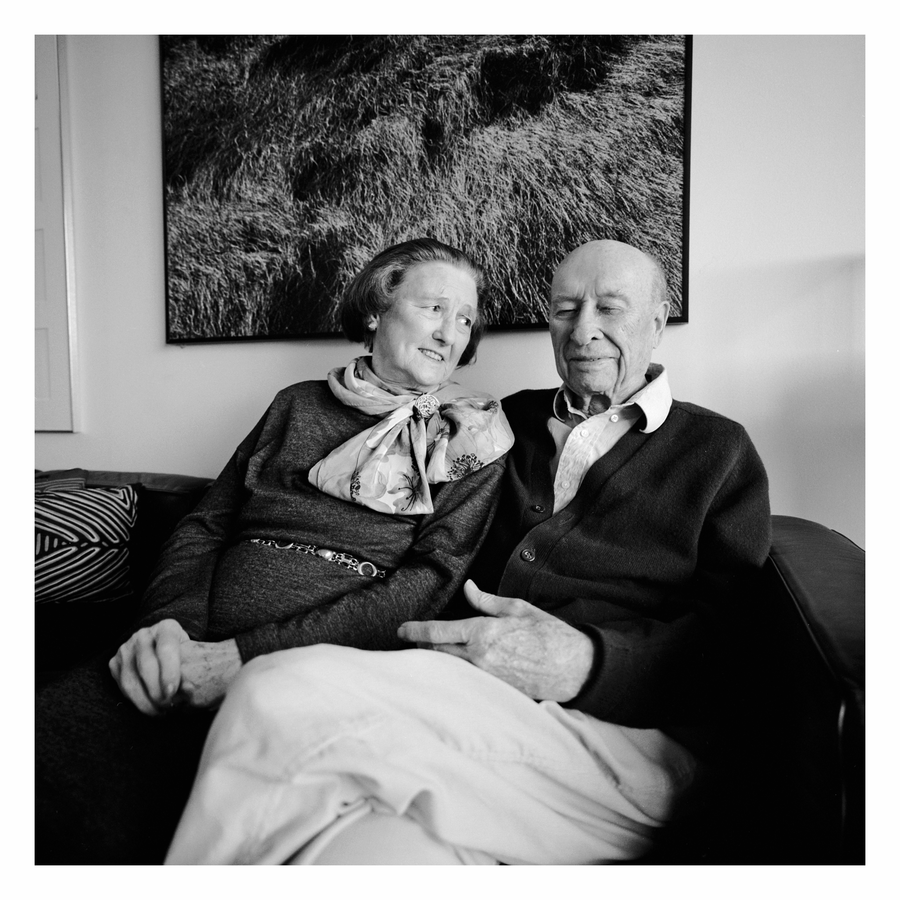 This picture of Eleanor and Harry Callahan was made in the 90's in Atlanta.

So thank you, Harry. He had a way of setting you straight in a very understated and non-condemning way.

Are all the series that I've made since from travels wonderful? No. It has been a career-long struggle to make pictures that count from new places I visit. To make pictures that raise the bar on the genré,  that contain some continuity, cohesion, thought and emotion, that say something. The point is, as my friend Patrick Philips says (he publishes the magazine "Martha's Vineyard Arts and Ideas": MV Arts & Ideas) to make pictures that "tell a story".

Harry said: "Photography is an adventure just as life is an adventure. If man wishes to express himself photographically, he must understand, surely to a certain extent, his relationship to life."

Travel can be a very large part of that. Stay tuned for the second story about the photographer Harry Callahan.