Bob Dylan sings the times they are a changin' over and over again in a refrain on a record made in 1964. He was singing about the civil rights movement. Of course, things are always changing but something happened the other day that drove the point home about how things have changed in my world, the world of photography.

I headed out route 2 on a photo day. Late summer and glorious weather, big billowy clouds, not hot and not humid. For those of you that aren't local Route 2 starts in Boston and is four lanes heading west until about mid state then it turns into two lanes. It roughly parallels the Mass Pike but runs farther north. It continues all the way out to Williamstown at the western edge of the state. (I have been making aerial photographs along the length of Route 2 for a couple of years. To see these go here and to read about the project go here.) I wasn't very far out when I pulled over to drive through what used to be the US Army base at Fort Devens, now largely privatized with small companies, some residential housing and a business park. I pulled in at a sign that said Mirror Lake, parked, got my camera and walked down the dirt trail toward the lake. This was one of those, "I don't know what's there but I'm never going to find out unless I go down and check it out" walks.

I got down to where the trail opens up to see the lake on my left. I took a picture, not trying to do anything more than show this idyllic late summer scene: 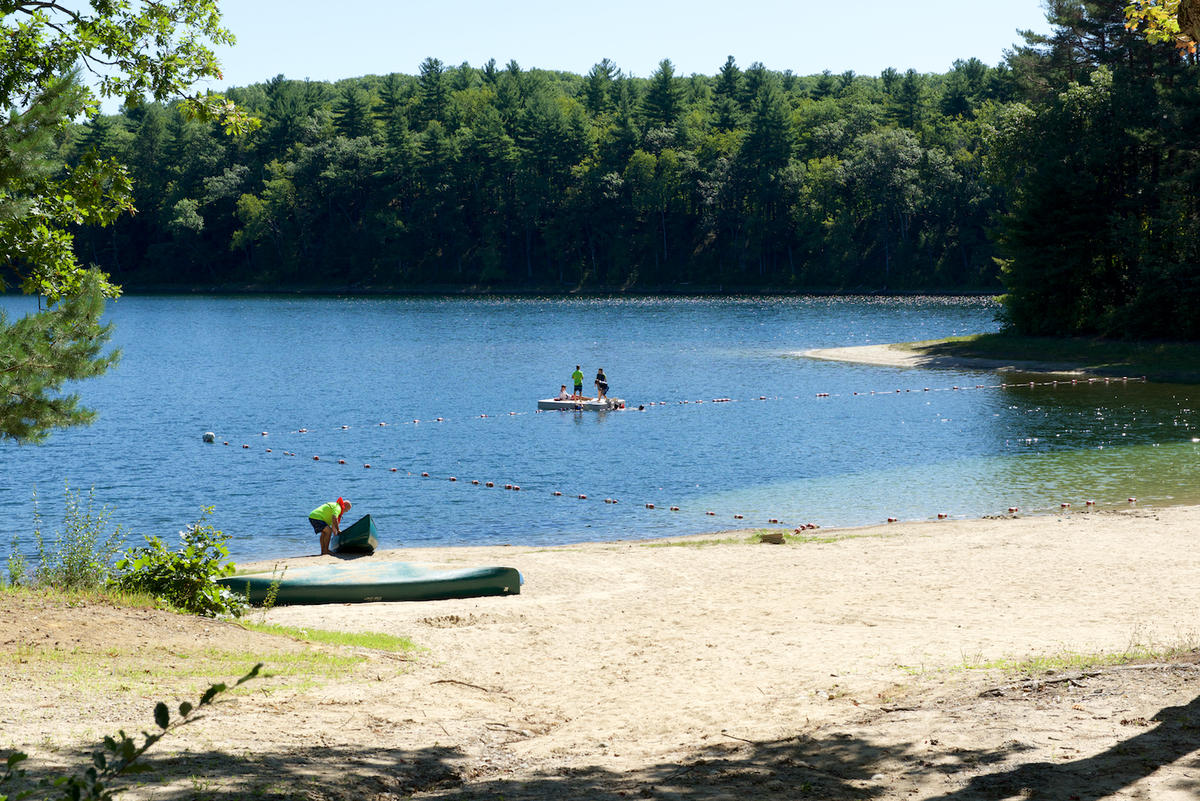 I heard a woman's voice "Can I help you?" off to my right. I looked over to see a middle aged woman walking towards me, her hair pulled back in a pony tail, wearing a smile and shorts and a Mirror Lake T-shirt. I said that I was a photographer and just looking things over on this beautiful day. She said, "I can tell you are. You don't see many people with a camera these days." Bang. There it was.

The big boys, or what we think of as the big boys, Canon and Nikon, are having trouble selling cameras. The whole field of point and shoots is almost all gone. DSLR sales are not terrible, but the market caters to us that are the shooters and our numbers are small compared to the amateur market. Smart phones have taken over as the camera of choice for most. What made the Nikons and Canons and others profitable over past years was the sale of millions of cameras to the amateur market. The cameras we use are halo products, made to set the bar high for those wanting better cameras so they can be "better" photographers and for pros, which most of us are. Sony is making some serious inroads into this more traditional model with big chip, smaller and mirrorless EVF cameras now. This is where most of us, as pros, are headed in the near term, those of us with our big heavy DSLR bodies and lenses. Can't come too soon for me. But Canon and Nikon and some others are way late to the party.

But she's right, of course. You don't see many people with cameras these days. Cameras in phones are just plain good enough for most now and we've always got our phone with us, don't we? When I stopped in at the Ale House for lunch in Gardner, MA later that same day after shooting with my too big and heavy Nikon for a couple of hours I put it down and pulled out my phone to see if I'd gotten an email, texted a friend, took a picture with it to share with another friend, ordered my food, looked at Facebook on my phone to see what what was up, ate my meal, paid and went back out with my too big and heavy Nikon to make more pictures. The only reason I need the DSLR is because I make prints, and usually large ones. This too will change.

The Times They are A Changin'.

The Route 2 Trilogy is aerial photographs made over two years of Massacusetts Route 2 from slightly west of Boston on out to Wliiamstown in the western part of the state.

The series is a trilogy because I photographed the length of the state in three groupings or sections. In all there were about 8 flights to make these pictures.

I wrote about the project: http://www.nealrantoul.com/posts/the-right-picture-at-the-right-time

Prints are 22 x 17 inches, archivally processed inkjet prints. You may see the prints by enquiring with Insight Arts Managment at: m.rantoul@gmail.com