In the 1930's Ansel Adams and Fred Archer devised a system for more precise control over both the exposure and the contrast of the negative. This then led to better prints. They were working with large format black and white negatives but the principles developed almost 70 years ago for film still hold true today.

I spent much of my career teaching the Zone System, from testing and calibrating lenses and shutters, to performing what were called "parametrics" (by Arnold Gassan), shooting tests to verify what various under and overexposure settings would do to the film, conducting shooting and developing tests and even making up a diabolically difficult midterm exam that asked my students in an intermediate view camera course to shoot eight zones and make prints that were accurate in these simple tonalities. I got so that I knew they would all fail the first week it was due. I showed them where they blew it and would have them go out and start over. If they failed the midterm again after the second week I would fail them for the class and allow them to take the course over another semester. This was a demanding  class and some would just do better taking it twice.

I still think of under and over exposure in "zones" and will often reference an area in my photograph in shadow zones (called "placing") to set the overall exposure for that frame. Of course, this is only half the equation as the Zone System was as much about what you did with developing the film back in the darkroom as it was what you did in the field. But luckily for us, our present day sensors have more dynamic range than our films did back then. I said to my two Three Amigos friends the other day when we were framing John's prints, that I seldom get into trouble any more with blown exposures. This is probably more due to the fact that our camera's meters are very good and the sensor has more latitude than film did than it is anything to do with my abilities.

Minor White became well known for being a proponent of the Zone System and wrote a manual on its use, which many of us who were in this particular "religion" thought of as being a classically difficult and confusing way to handle the material.  I know I never used it as a text. Later, after Minor died, Peter Lorenz took a stab at rewriting the book and called his " The New Zone System Manual", co- authored with Richard Zakia, a sensitometry expert from RIT. Minor's name was listed as a co-author but the project was really Lorenz's. Peter was a good friend and I respected his effort although I'm not sure this new book truly brought clarity to the concept of the Zone System. 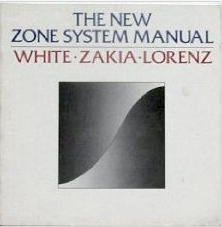 Why would this technical concept of control over exposure and contrast become a "religion"? Largely thanks to Minor, who mystified it, treated it like something way up there on the unobtainable summit of the highest mountain, a goal to aspire to but never something fully achieved. This was bullshit, of course.

I was a product from the "other shop", the RI School of Design in Providence. My primary teacher was Harry Callahan (I had 2 years of undergrad and two years of graduate with Harry). Compared to MIT, where Minor White was, Harry's approach to teaching the art of photography was much more pragmatic and hard boiled: teach skills and teach design. I remember discussions with him over the years about what was taught at MIT and his impression was that it was all about mysticism and meditation as vehicles for enlightenment through photography. It was ironic that in the early seventies many students who had studied undergraduate with Minor in Boston, came to RISD an hour away to get their graduate degrees as no schools in Boston offered an MFA in photography in those days.

Was it a good thing that I taught the Zone System all those years? Yes, as it taught discipline, instilled a work ethic and helped students make first rate prints, something it was very difficult to do. Were there tears? Yes. Was I known as something of a hard-ass? Yes. Would I do it differently? No.