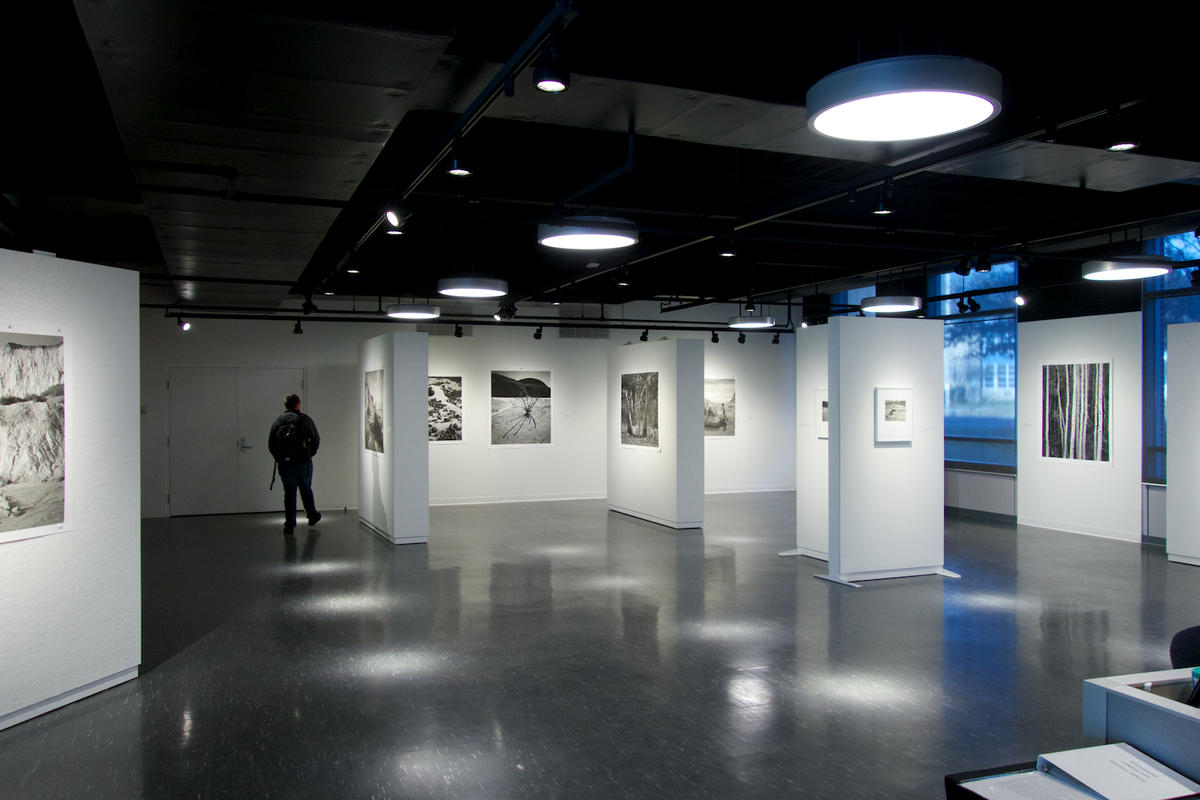 A review coming out after a show is over? What use is that? Not much if you're relying upon the review to tell you whether or not to go see the show, but of value perhaps in order to consider larger issues. Issues that extend beyond the exhibition itself. That's the case here and I hope you'll follow along.

In discussion is the compact and concise "Regarding Landscape" show of large black and white prints from 8 x 10 inch negatives at The Gallery at Worcester State University this past fall. This was in every way a photographer's photography show, meaning that its concepts and precepts were all about making a point to Stephen DiRado's and Frank Armstrong's followers (and presumably, students) about just what happens when large prints are made and, in this case, large prints are made from 8 x 10 inch film negatives. Briefly stated: something exquisite.

Of course, this wasn't anything new, nor did it presume to be.  Ansel Adams painstakingly made large prints from his negatives over fifty years ago the old fashioned way: with an enlarger, a very big sink, lots of chemistry and quite a bit of help. In his later years Aaron Siskind had prints made by Palm Press (aka: Gus Kayafas), large prints of his famous rock wall pictures on commission. Now, of course, most large prints are ink jets from large negatives made from scanned negatives and Stephen's and Frank's in the  show were made this way. So technology has moved process ahead some. But they each took care to make sure that the prints, at about 5 feet across, were faithful to photography itself, not looking like they were some digital translation of an analog process. The prints in the show were beautiful; luminous and tonally smooth. No grit, no pixelation or crunchy over-sharpened tonal scales. Just clean and true transparency, for this is the true asset that the large negative gives, the content portrayed with little interjection of process and no contrivance.

Big work means fewer prints in a show, of course, and there weren't many there. But no matter, for the ones that were on view were magnificent.  Showing Frank Armstrong and Stephen DiRado together,  colleagues and friends at Clarke University, allowed us to see their similarities and differences as their aesthetic derives from a different place. Frank's pictures live in a world of fine control, his photographs are purely seen and ordered, his sense of design, placement and light are consummate and refined. 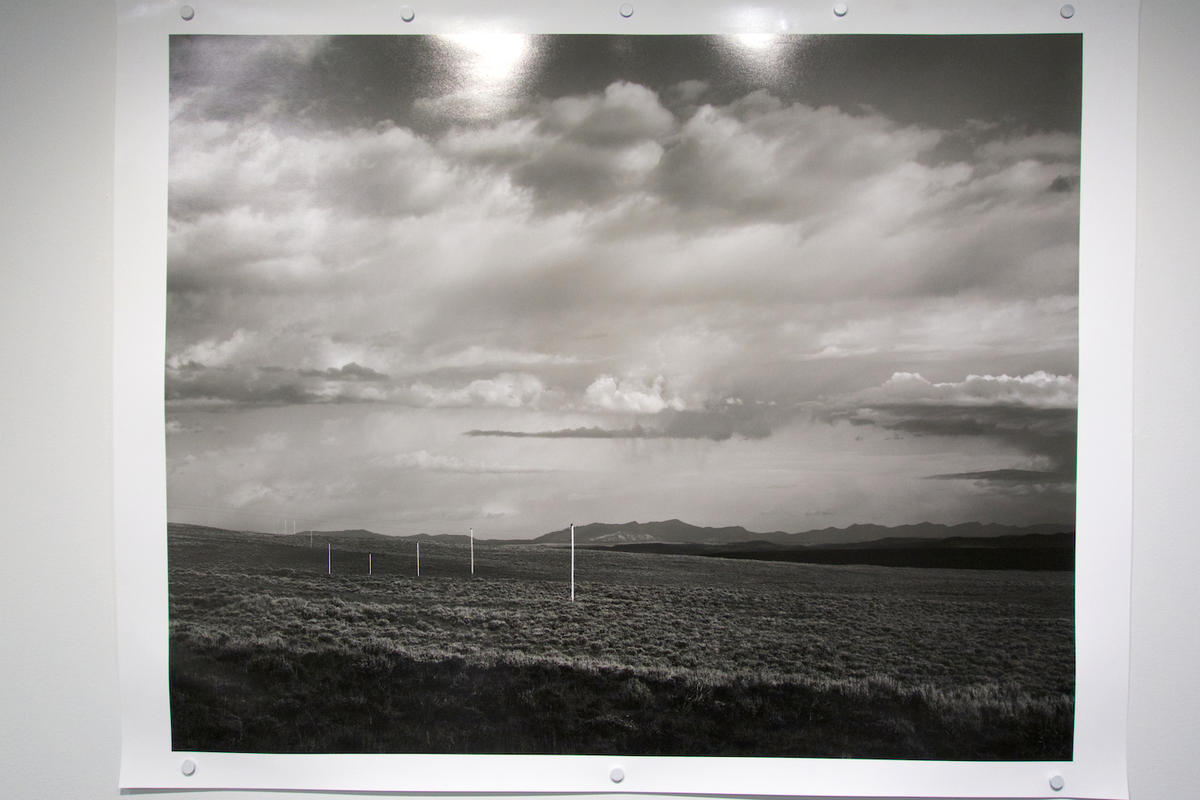 This one above about as beautiful as anything I have ever seen in a photograph. It is almost nothing: some posts in the ground, some sky and a little bit of mountains in the background. I think I know what Armstrong was thinking at the time he made this. I believe his motivation was to celebrate that this scene in front of his camera was so incredible in the light flooding down on it and in the sky that Frank felt that was all that was needed. After all, with photography the light we use has to fall on something. In this case he reduced it way down to almost nothing. 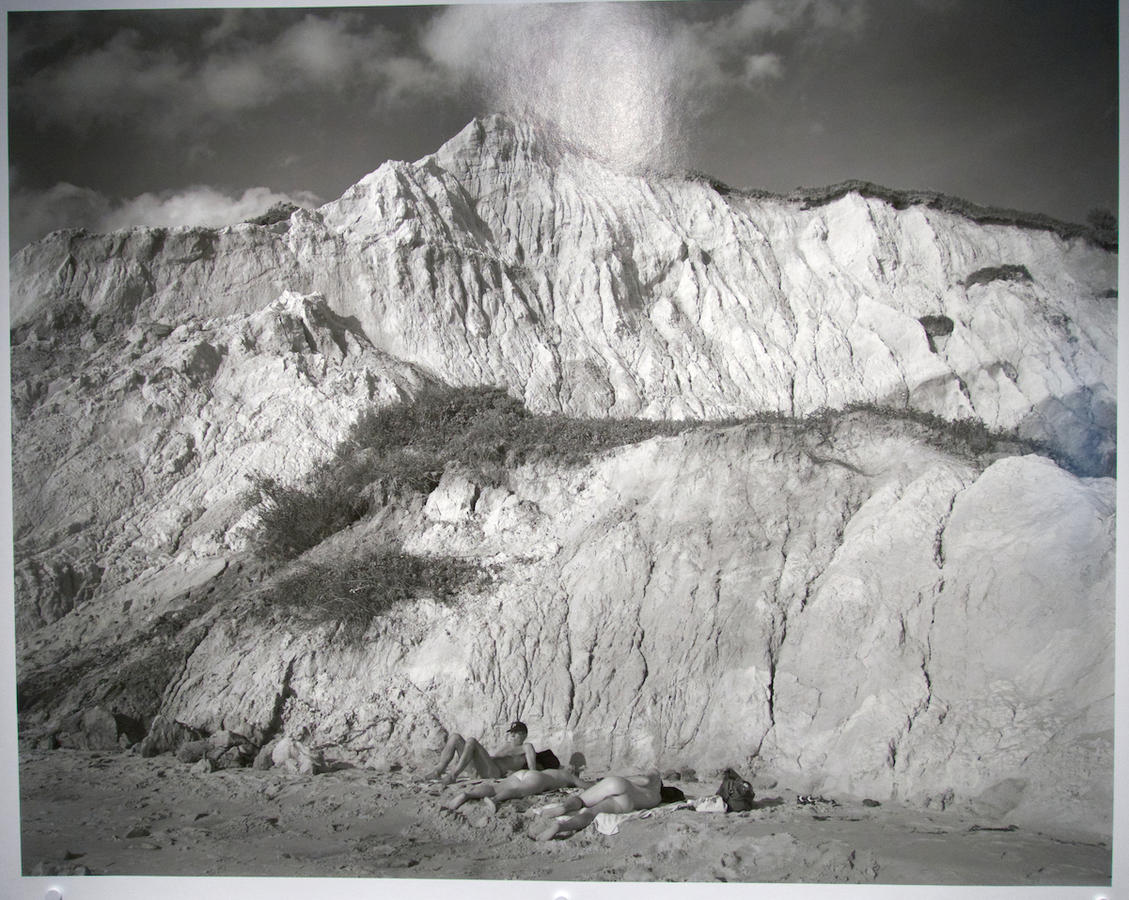 Wheras DiRado's scenes from Aquinnah Beach on Martha's Vineyard are harder to nail down, at least for me. Equally magnificent in their rendering, these photographs place naked beach goers in this other worldly glow of the clay cliffs, some languishing in the sun and others posed, holding still for the big camera's shutter to freeze them in time. 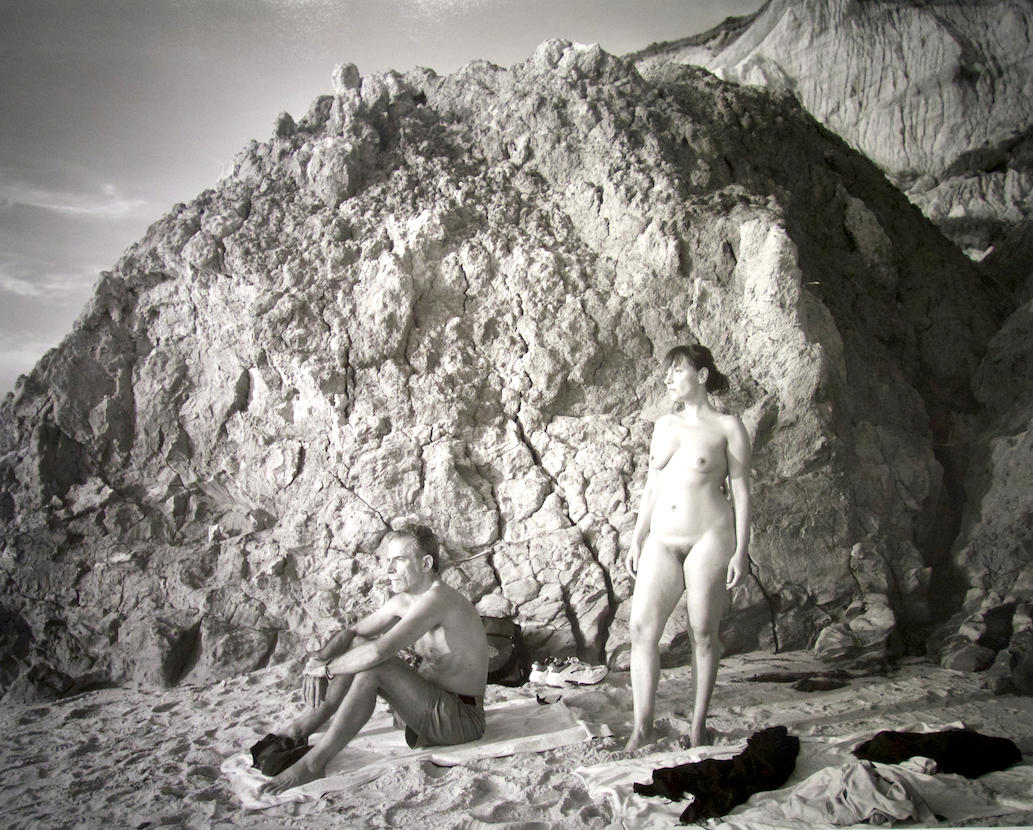 DiRado is somehow less formal in his approach. There is still critical placement here but edges aren't everything for him; his subject is the portrait, the huge (literally!) comparison of flesh and human form up against ages old clay and sand and sea. His are both modern pictures but also timeles, enigmatic in their juxtaposition of classic 8 x 10 material rendered impeccably with present day subjects heading off after a day at the beach in their Audi or Volvo to fix dinner for guests arriving  from Manhattan for the weekend.

This show was a wonderful way to advance the efficacy of combined process in history: using film with a traditional camera as old as photography itself, a digital scanner which is the device that first brought us into digital photography and the spraying of ink on a roll of paper that is current practice and cutting edge to make these prints.

Finally, the bigger issue is, yes, bigger prints. The 8 x 10 inch contact printed (of which there were several in the show placed for comparison) can be a glorious thing. No quality lost in translation or enlargement, all the tones and richness rendered 1:1. Traditionally, enlargement diminishes quality. But take that big negative and enlarge it just a few times to get to that 5 foot print and you have something to behold. This show did that and revelled in it.

We are all seeing larger work these days as photography is welcomed into the arms of all visual art forms. But we are also seeing work printed too large by artists that are either inexperienced or don't know just how good some large work can be. Frank Armstrong and Stephen DiRado set the bar for large work with this show. Awesome things happen when you stand in front of one of their large prints. You are enveloped into its space, surrounded by the image in front of you, but also it  consumes your peripheral space as well. If you are a photographer, tread lightly here. Watch out for "bigger is better" as it isn't always true. DiRado and Amstrong are two of those that have done this so very well. Maybe it is "bigger is better when done right". Professors Frank Armstrong and Stephen DiRado know exactly what it takes to make work this big this good.

I saw Frank at an opening after his show came down and he told me he'd never seen his work enlarged before. Can you imagine what that was like for him? Lifelong dream fulfilled.

What a pleasure, Stephen and Frank. Thank you so very much.

Note: Want to see some of these prints? Well, after a show comes down, most often what happens is the prints go back to the artist's studio or workplace. Stephen has work up now at Clark Gallery in Lincoln, MA and Frank shows at Panopticon Gallery in Boston. Were this my work and the show over and it was now back home I would make the effort to show it to anyone that expressed an interest. I bet they would too.Track the work down, it shouldn't be hard. And know this: it will be worth it.