This is the fourth and last installment about the Portland, Maine pictures I made in 1996.

There are three more photographs in the series. Here is the next one: 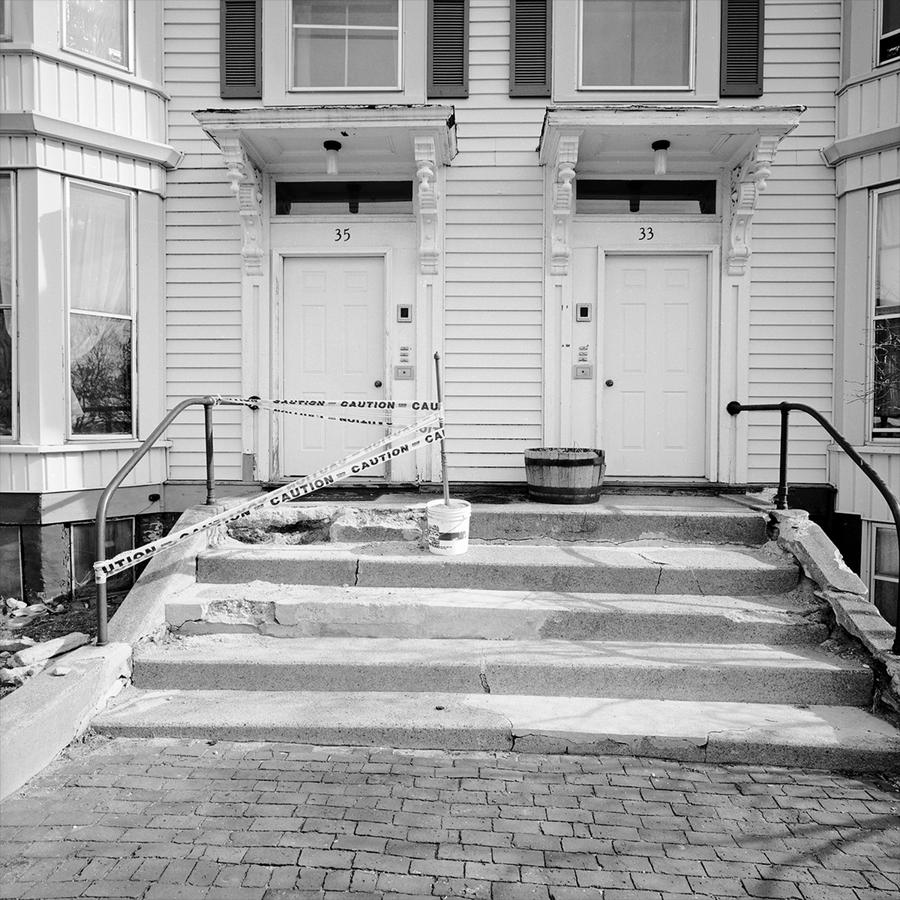 With the numbers 35 and 33 this one makes me think about: serendipity, chance, similarities and differences, and, a recurring theme for me, the same but different. Serendipity as if you lived in No. 33 you'd be fortunate not to have this big hole in your front steps. Why is one side in worse condition than the other? "Similarities and differences" in this case is much like the "same but different" in that these two sides, these two apartments were made presumably exactly the same, with mirror image rooms and entrance doors. But time has modified them, individualized them, differentiated them. Look closely and you can see many differences. Decay and  atrophy are persistent themes in my work, so it comes as no surprise to me that I was attracted to these crumbling concrete steps. 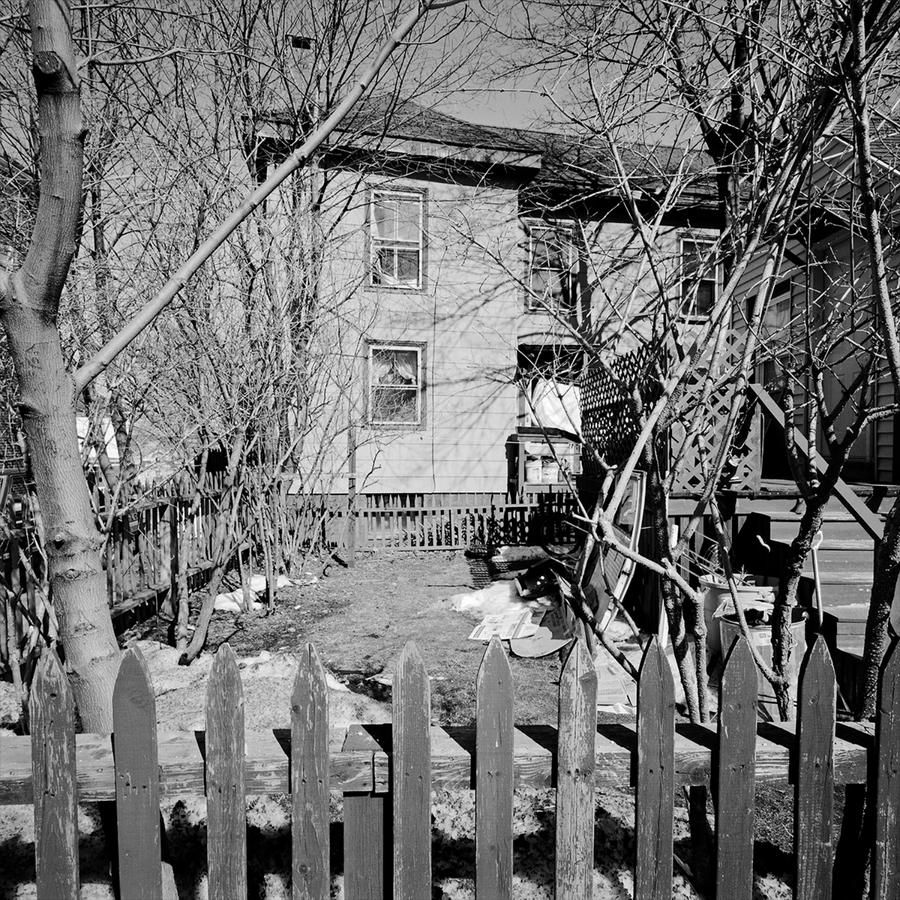 And now for a change, the second to last photograph in the series. For the first time we are looking over a fence into a backyard, and one that is chaotic. There is still some containment and convergence too, notice the fence on the left and the steps on the right. There is also a filthy snow bank, lots of junk and a difficult path to the building in the mid background which is being threatened into obscurity by the tree branches. Imagine leaves on those trees in mid summer. They might block the house from view completely. What else? Rather than moving in close to eliminate the fence in the foreground I chose to leave it, with its sharp points looking like spikes that would gouge you if you tried to jump it. 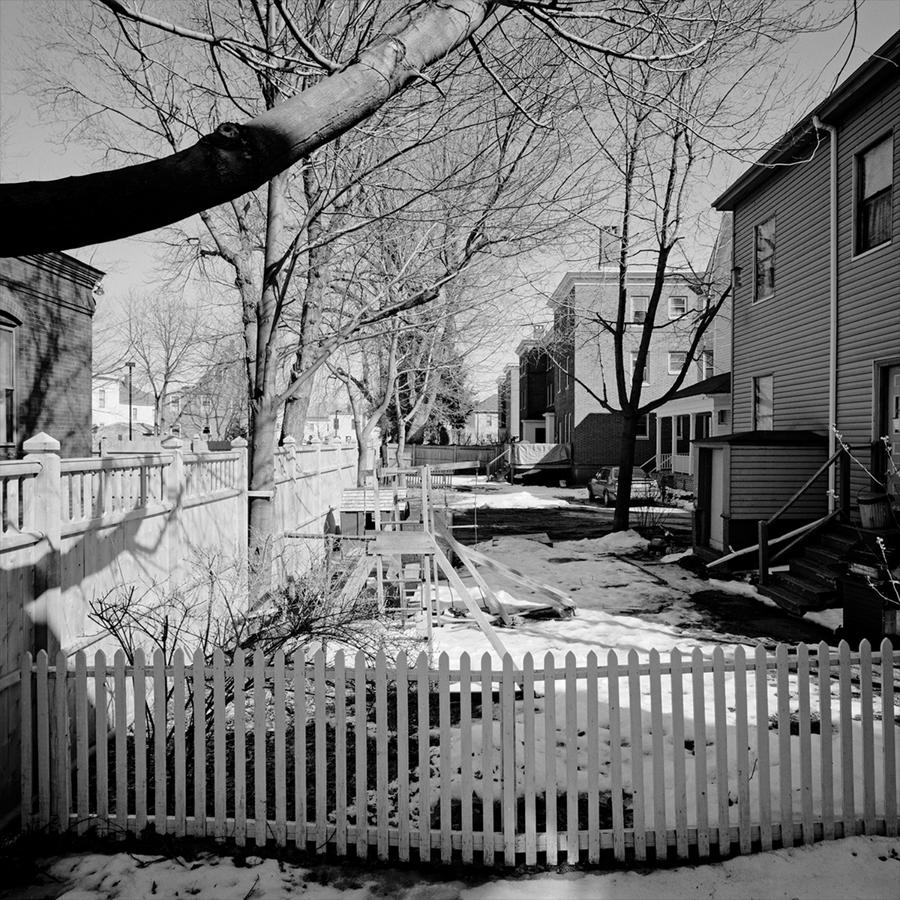 So here we are at the last picture in the series, this one showing real depth as we skim along several backyards. This is the first time we've seen a picture like this in the series. There are some obstructions to our release out of the picture, some junk in our way, but for the most part the path is easy. If you've looked at other series of mine you'll know that very often there is either an opening out to the rest of the world in the last picture or a barrier to that leaving. Take a look at the last image in Yountville, CA or Nantucket, MA as examples.

Here at at the end you might ask if there was some big point to these pictures, some conclusion to be drawn from the series that speaks to a more fundamental message. Another way to phrase this question is to ask if I went into it with a purpose in mind, a goal to achieve, some ulterior game plan perhaps to use these pictures to make a broad statement about something? Very simply, I did not. A series like this is an evolving process, made intensively over a short period of time and involving discoveries, trials, false starts, attempts and misdirections as well as successes. The Portland, Maine pictures do speak to the place, to where I photographed, to the light that was present those two days, to the time of year I made the pictures, to the issue of selectivity, how a photographer chooses to bring something to prominence, to photography and yes, to the width of the lens I used to make the pictures. But they do not dictate outcome, the viewer's interpretation of just what these pictures are about. This answer may irritate you, seem devious or that I am shirking my responsibilities as the person who made them. I don't believe I am.

Long ago, some years after I was finished with my graduate studies, I went to an opening at a gallery along Lansdowne Street in Boston, on the back side of Fenway Park, at a gallery called, if memory serves me, Enjay. The work was by Harry Callahan and, as he'd been a teacher of mine, I went to see the show and also him as I knew he was going to be there. Openings weren't Harry's favorite thing to do and I remember late in the evening, Harry leaning up against the counter in the back room while a drunk European man was verbally assaulting him with questions about what his work meant. He was standing right in front of Callahan and was screaming at him:  "What's that mean?"he yelled, pointing at a picture of Harry's hanging on the wall and then, he pointed at another and yelled, "What's that mean?" By this time Harry had given up trying to reason with the guy. Although Harry could take care of himself, I went to his defense, pushing the man back away from Harry and yelling at him to leave Harry alone.

Forgive me, but I've never felt it was incumbent upon the artist to explain the work.

Before I close this post I wanted to touch on a couple of more points in regards to this group. One is result based coming from the conditions and circumstances I found myself in while making the Portland pictures. Were you to have the actual prints in front of you and were comparing earlier series to these and some series that follow this one you 'd notice right away, of course, I was working under brighter and contrastier light. If you know photography you know that alone usually makes for more depth of field, meaning I was able to use a hand holdable shutter speed with a smaller aperture. This is very apparent in the Portland pictures due to their being sharper from foreground to background.

The other point is that this was about to be an incredibly productive time for me. While I still continued to work in 8 x 10, that is a device that tends to produce pictures in a more measured manner and this was as true in the mid 90's as it had been for the previous ten years and also would be over the next ten. But having this Hasselblad SWC in my hand again, after a moratorium of many years, would also allow me to make many new pictures, series like the Oakesdale Cemetery series the following summer or the Hershey, PA series in the early spring of 1997. These, along with Portland,  have proven to be seminal pieces in my oeuvre, shown frequently in various shows, some of which are in the 2006 monograph American Series. In fact, the Portland series are in the permanent collection of the Boston Atheneum and the Peddocks Island series is in the collection of the DeCordova Sculpture Park and Museum in Lincoln, MA.

And lastly, my printing by this time was well practiced and fulfilled a very clear set of objectives. The Portland series, while now shown as inkjet prints, were originally printed in the darkroom on Kodak 14 x 17 inch Polymax F surface paper and toned with selenium. The prints are about 12 inches square and printed in a very straight and undramatic way, meaning that they run from the D-max of a full black on up  the scale to a Zone VIII and IX white while I made a clear effort to contain detail in both shadows and highlights.

If you're read through all four of these posts I thank you for hanging in with me. Sometimes these posts are a lot of work, but they also bring me back to where I was and what I was at the time I made a group of pictures. I am appreciative of both the opportunity to share them with you and also the challenge implicit in doing a good and thorough job.