This post follows and continues a post called Portland, Maine.  In this one I will take us through the images and write about the sequence.

I don't know if this is akin to grandpa sitting on the porch telling a story to kids formed in a half circle around his rocking chair, but it feels a little like that. From my perspective it is very rewarding to be able to write about this work. It helps me relive the experience of making these pictures. Forgive the indulgence. If you can't take it you know you may leave at any time, right?

So, the series from Portland shot in March, 1996 starts here: 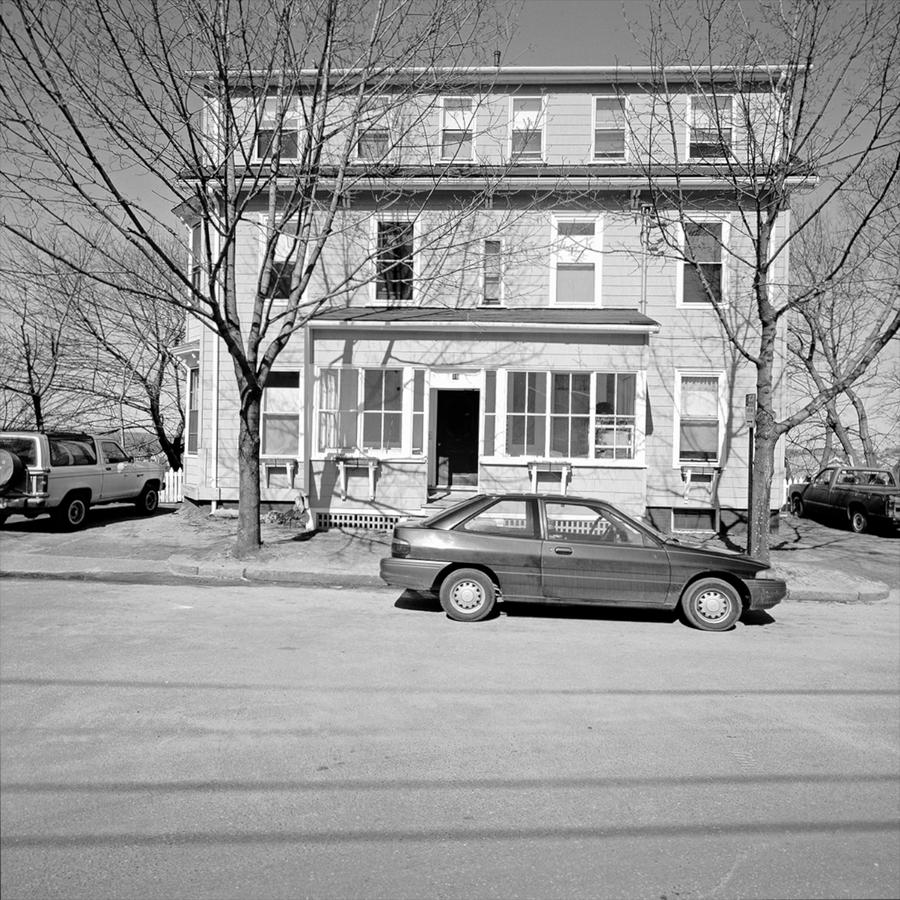 Because it can. This is straight out and flat out an affront on the viewer's eyes. A symphonic blast from the brass instruments proclaiming that this is different, new and brash. A slap in the face saying "wake up". Bright and glowing but contained by the perimeters of the trucks both left and right and further by the car in the front as well as the telephone wire shadows, the picture is my way of saying that I am working in a new way. It is frontal, confrontational and loud.

There is also something else going on here and I apologize for belaboring what the camera does but it is doing a very unusual thing. The building, being straight on to the camera is rendered relatively accurately and it wouldn't occur to someone to doubt this. But look at the two trucks. See how we're seeing the sides of them? It is almost as though they are turned sideways to us but they are parked back to front from us at the same time. Is this perhaps slightly Cubist? It is the severe width of the lens on the SWC doing this and it is unique the way it does it, so clean and crisp on the far edge of the frame.  I want the viewer to know this at the outset as I don't really care about conventional rendering, meaning staying within prescribed traditions, rules and boundaries. Finally, while it isn't apparent in this picture, the lens is doing exactly the same thing to the top and bottom of the frame. We will see this shown more prominently later. 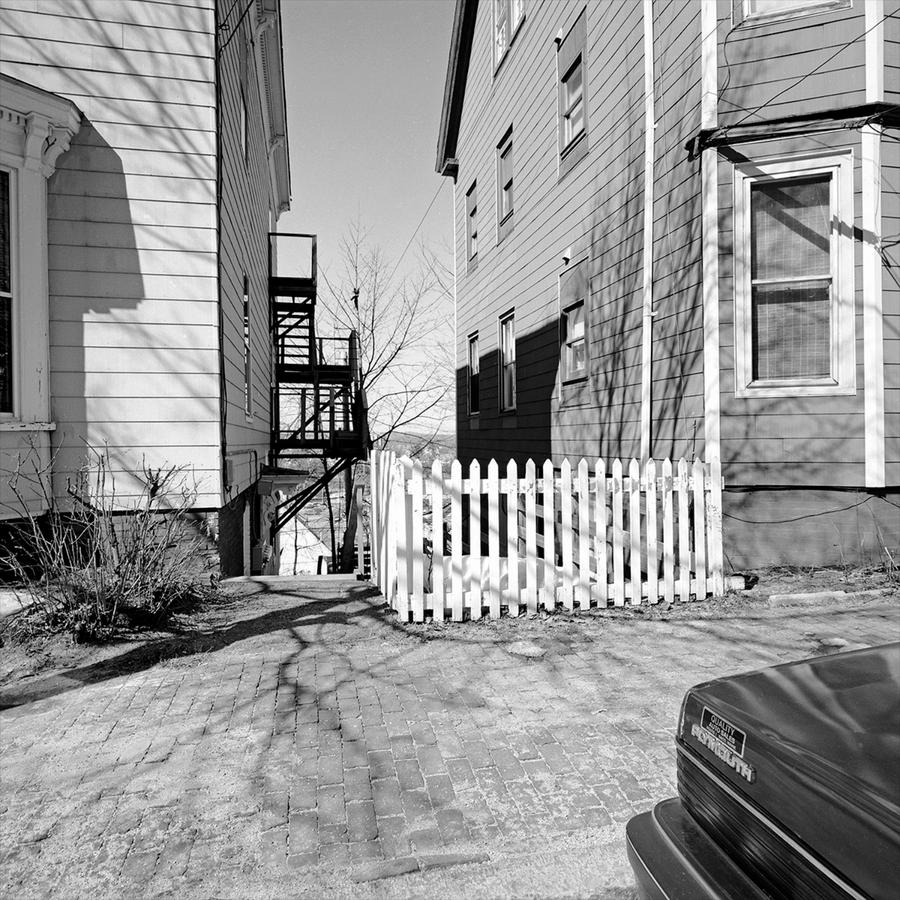 Where the first picture was frontal and difficult to escape out of this picture is an effort at a visual opposite for it is really intended to accelerate the viewer right out of the front and into the very far background. The Plymouth on the right, of course, sets this up for it is a surface that you slide past to get to the railing, then through or maybe over the railing, along the house's siding on the right, through the tree branches and out. As a teacher I used to describe to students the difference between "fast" and "slow" pictures. This is a fast picture.

As we are in a sequenced series, I am now setting us up for what is coming next where we will go closer and tighter. The next one is a core picture in the series, meaning it is a picture in a subset that other pictures revolve around. There will be two others later in the series. 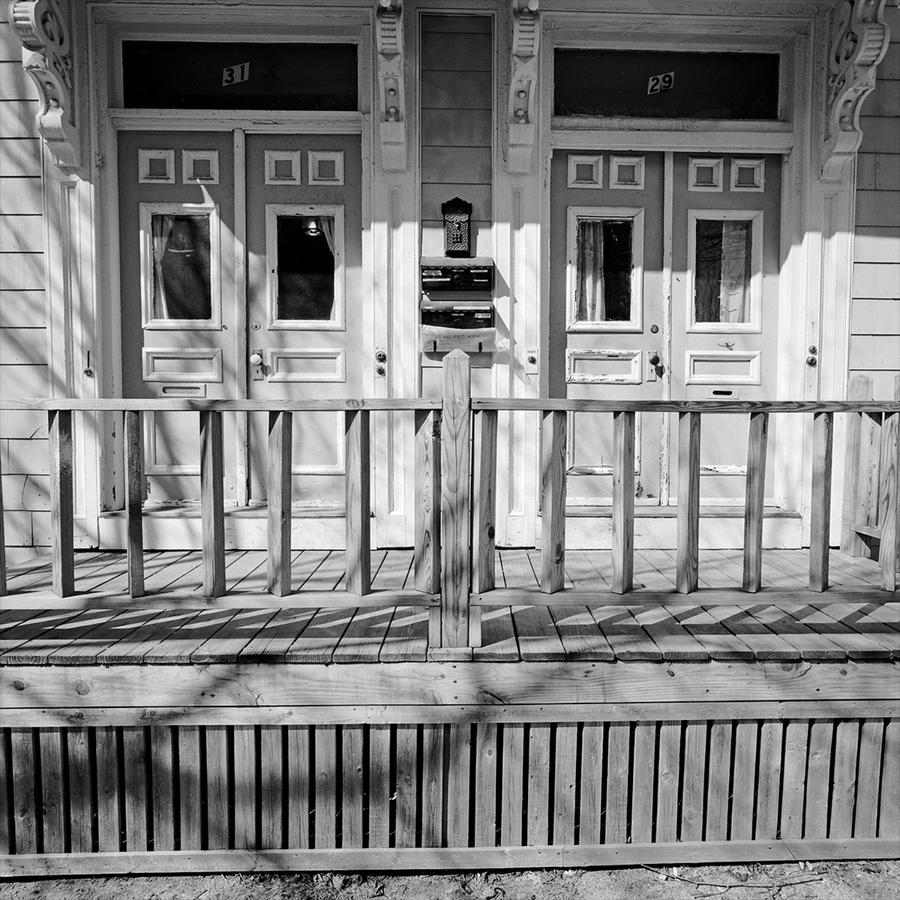 I wrote about this one in the first Portland post, but suffice it to say that it grounds the two others in the group in a complex and intricate way of looking. It is also planal in that the subject sits roughly parallel to the camera. This is important, as you will see. 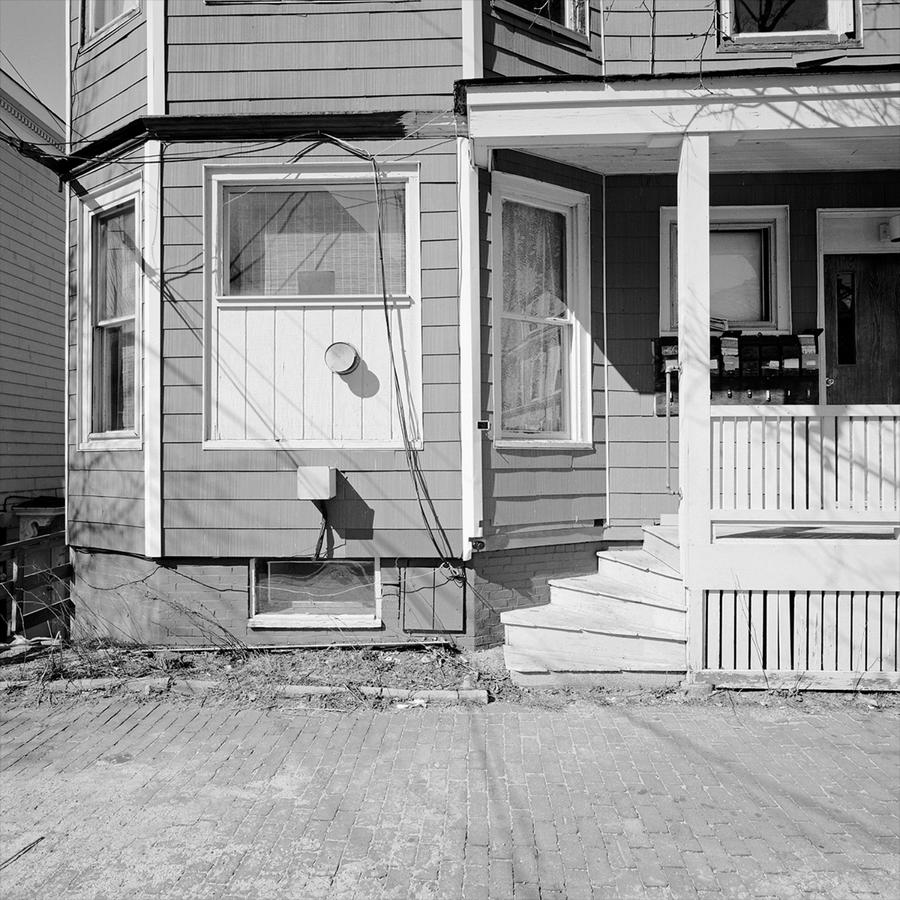 The above picture continues this trilogy of pictures and also finishes it by allowing some slight depth and even a brief path up the stairs. All these pictures are a little off in that they don't quite seem straight or level or lined up. This is intentional and one of the things I was known for in my series work (and, in fact, something I still do). Jeff Hoone, in his intro for my book American Series wrote:

Working almost exclusively with a square format camera, his photographs begin off-center from our normal panoramic field of vision. Square photographs give us more information on the top and bottom of the frame, hide things that are on either side, and distort perspective in a way that is uniquely photographic. His interest in looking at things photographically as opposed to simply rendering a scene with a camera develops its own visual language complete with syntax and punctuation. As our eyes move around his pictures various objects lead us outside of the frame and like the page-turning process of reading a story, they lead us to the next image which feels familiar yet not quite the same as the picture we just left.

So, here we are at the end of four pictures in the series and it is a good time for us to stop. If you've looked  at the full set you know what's next. If you haven't, take a guess.