I've been back from Europe and Paris Photo a little less than a week and it is time to move into the festival and show what was there that I liked, and perhaps a few I didn't.

Note: I will attribute the works where I can.

Day one I spent walking endlessly around,  quickly overwhelmed by the sheer size and scale of the show. At one point I stopped, got an overpriced sandwich and sat on the steps and told myself to focus, Neal, make some sense out of this. 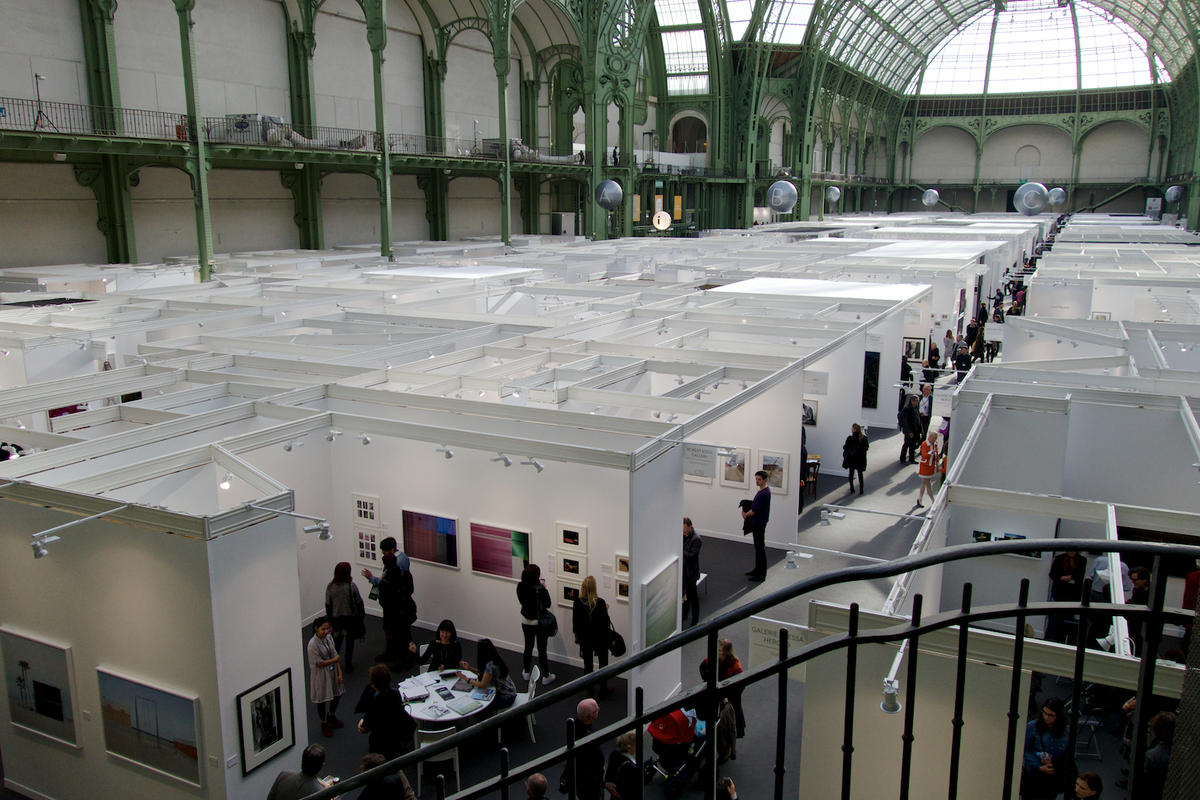 Overall impressions: Much good work. A great deal of work striving to be seen, noticed, purchased. Major parts of photography neglected, missed or not deemed worthy. At times, the back story was important, such as in David Graham's work: 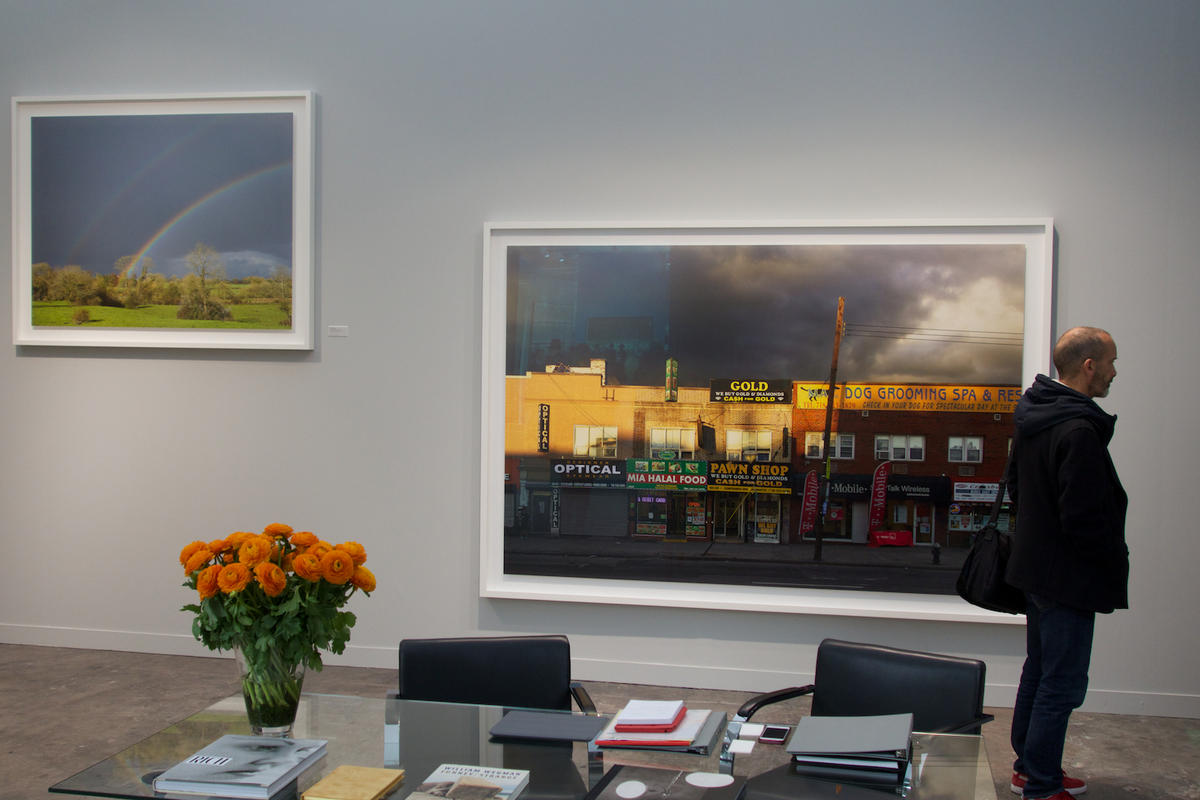 Graham uses America as his canvas and is from England. Each photograph is a symbol of larger issues brought about by his research and his study of, well, us. 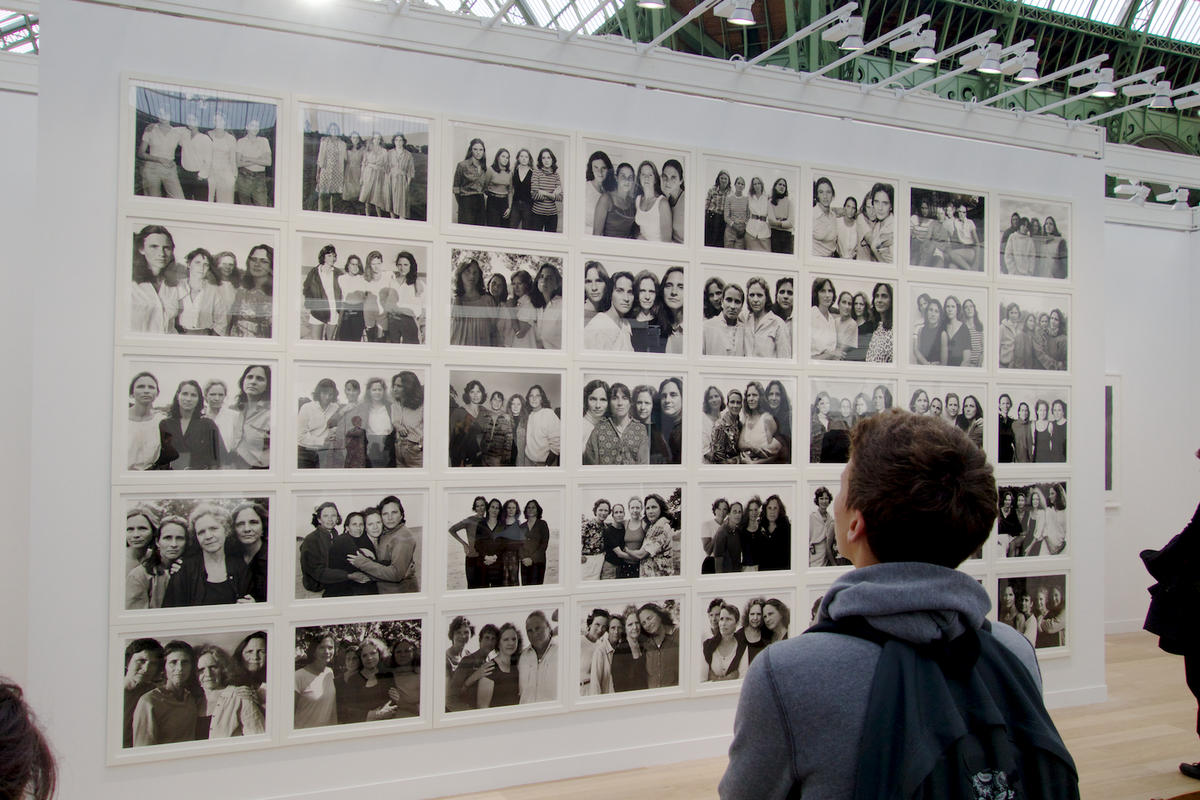 These are by local artist Nick Nixon of his wife's sisters over 40 years. Perhaps you saw the same work on view at the Boston Museum of Fine arts last year. I studied the interest in these. It was steady and people were really looking. These prints were larger than the MFA ones and were the centerpiece of what the gallery was showing. Sales? I saw no red dots but this could be just because the gallery chose not to show them. Would you buy just one of these? Buy one at time seeking to obtain all them?And then this issue of an artist being known for something he/she did as a sort of yearly sideline interests me. I am sure Nick has mixed feeling about this work. I wonder if he would have rather been represented at Paris Photo with some of his other work? 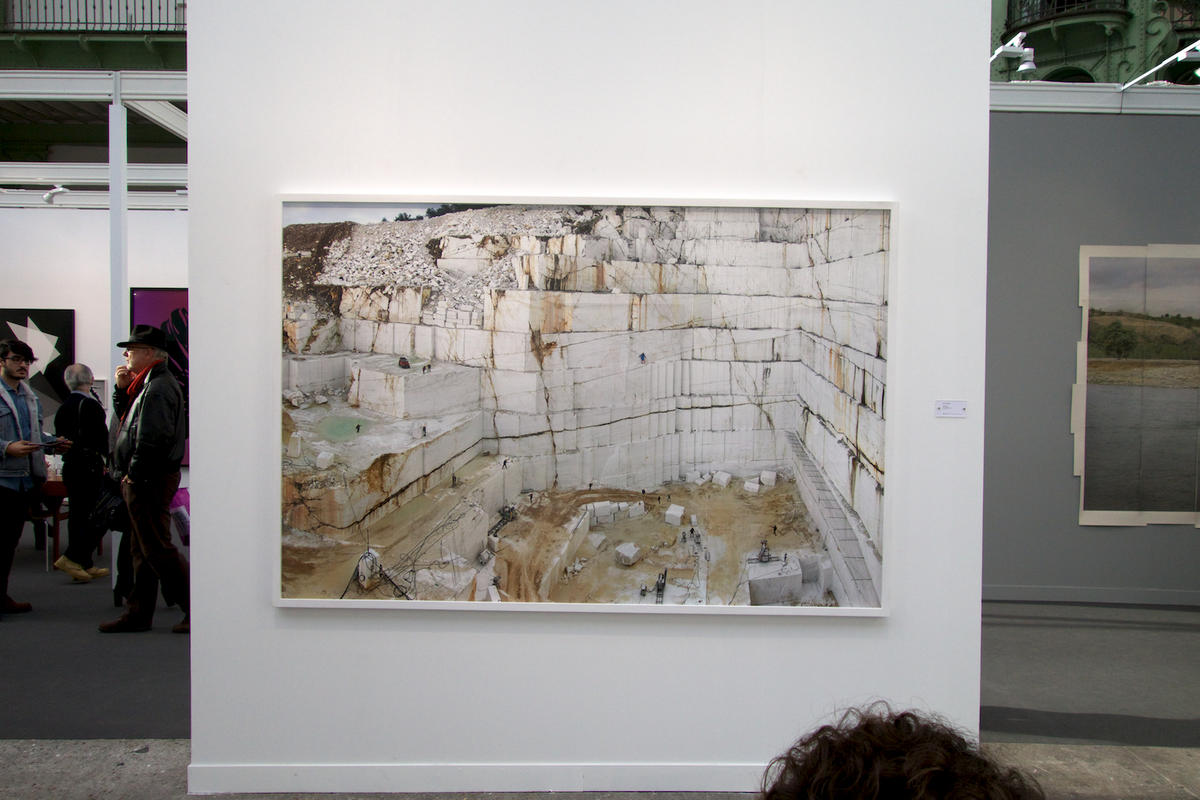 This marble quarry picture illustrates how things reappear.  Although quite lovely it certainly isn't anything new. I was doing these in 8 x 10 in the early nineties from marble quarries in northern Italy and Ed Burtansky practically established his  career with the ones he did of  the quarries in Barre, VT. This one's by Pannos Kokinas. 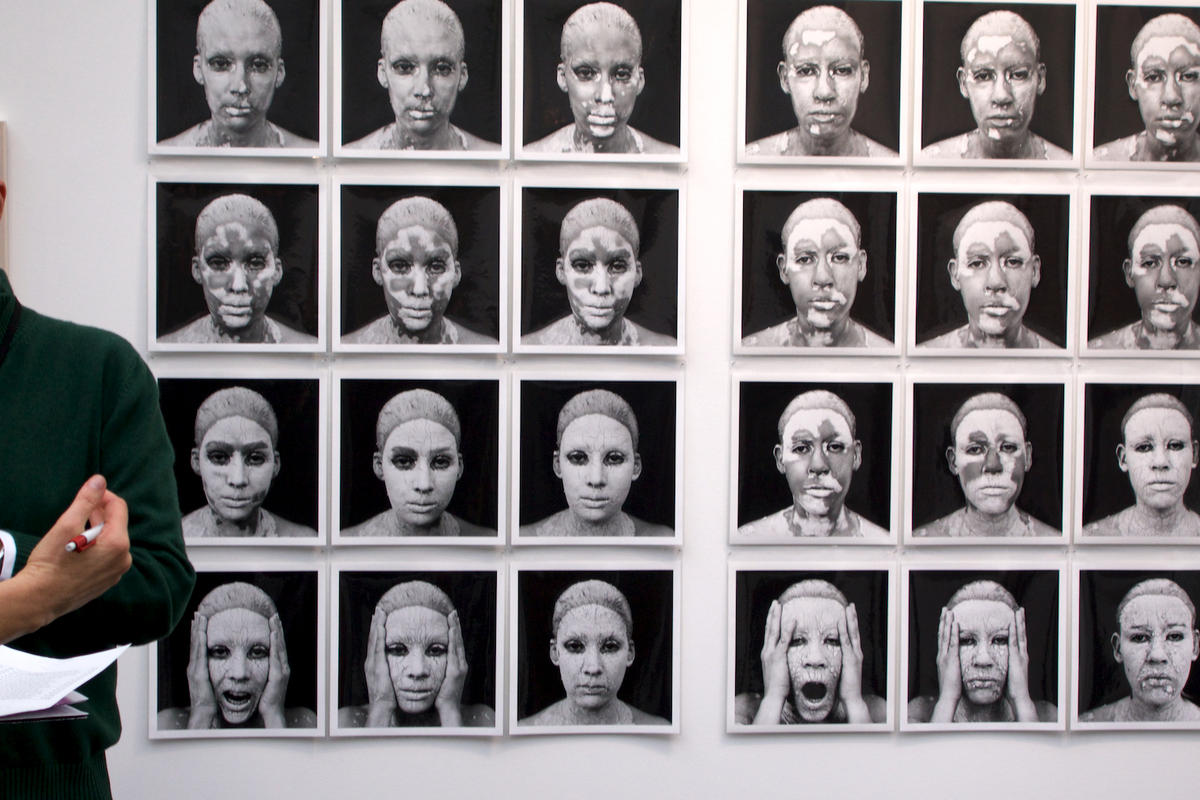 While some galleries showed very large pieces there were other efforts to show work that would impress from a distance such as this gallery showing grids of photographs. 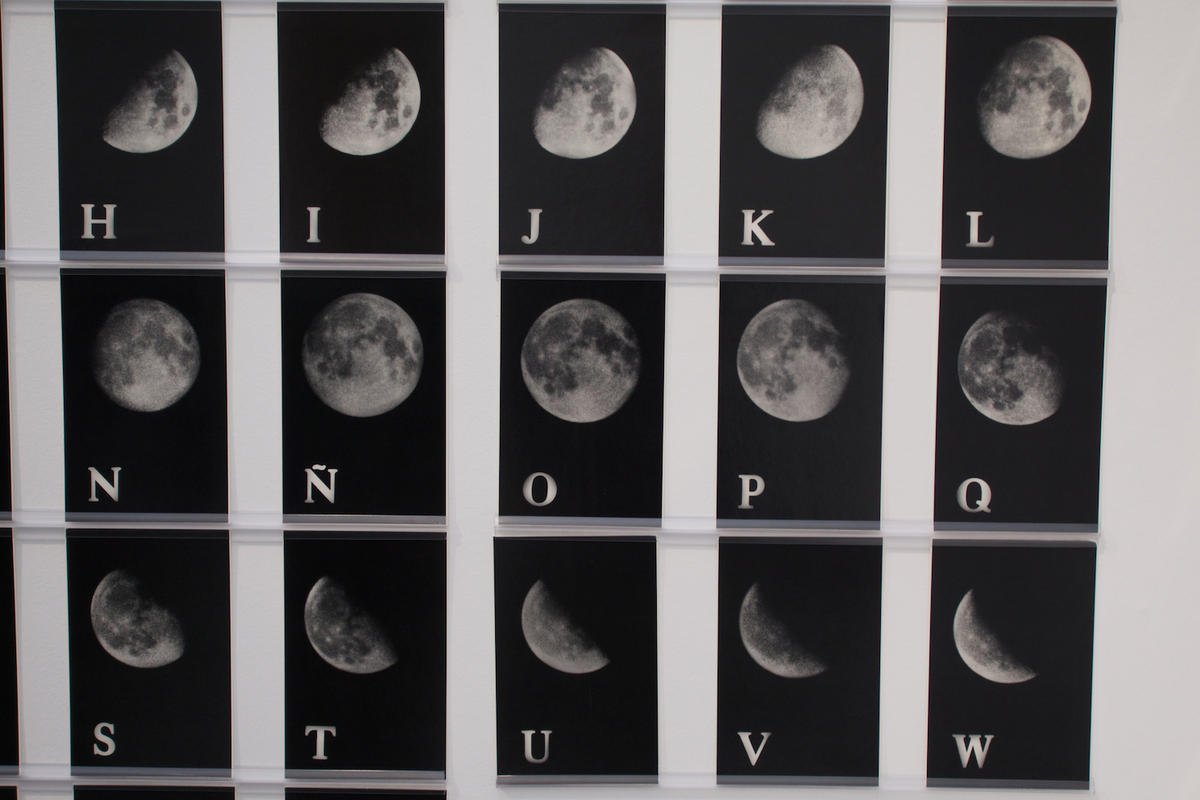 Arno Minkkinen had a couple of very nice pieces: 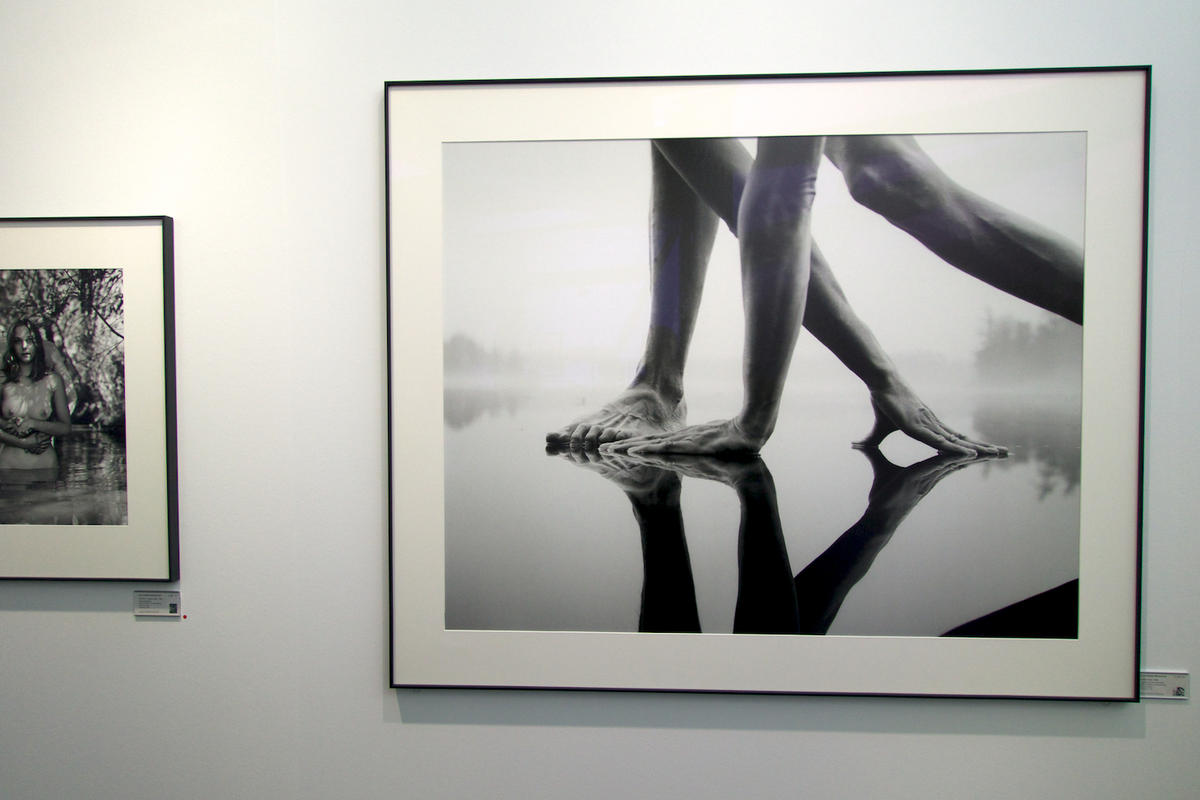 Notice that when I took this the first day, the left smaller piece had sold and the larger more iconic image by Arno had not. Arno was there at the show.

This photograph seemed to be positioned to be seen as a blockbuster and it was impressive but also left me a little underwhelmed: 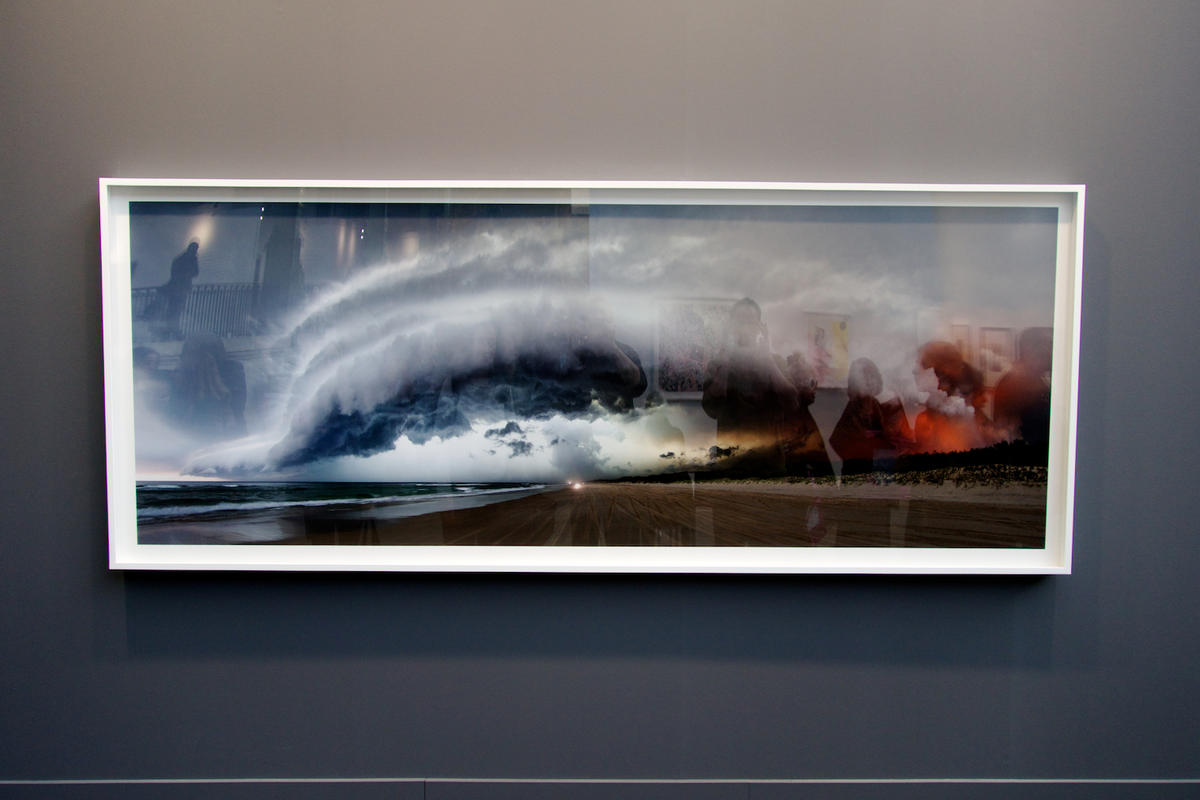 It probably was about 80 inches across.

Stephen Shore's work was there: 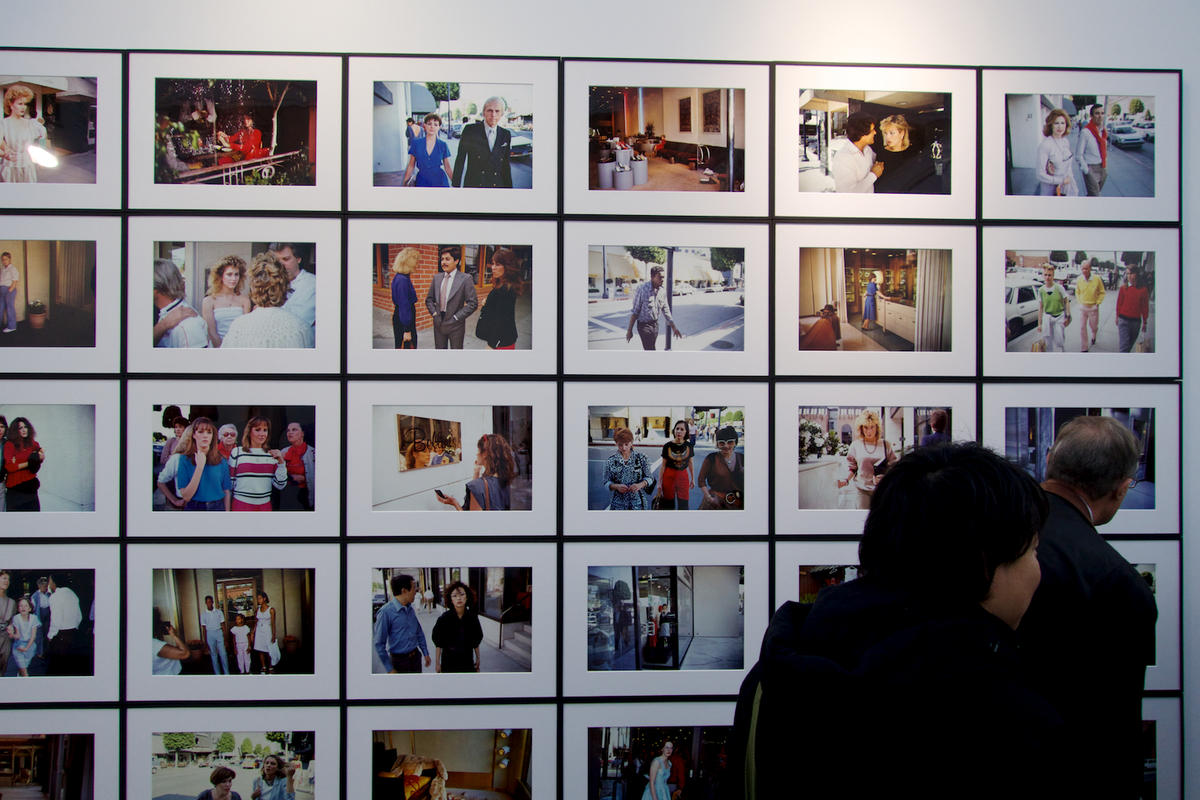 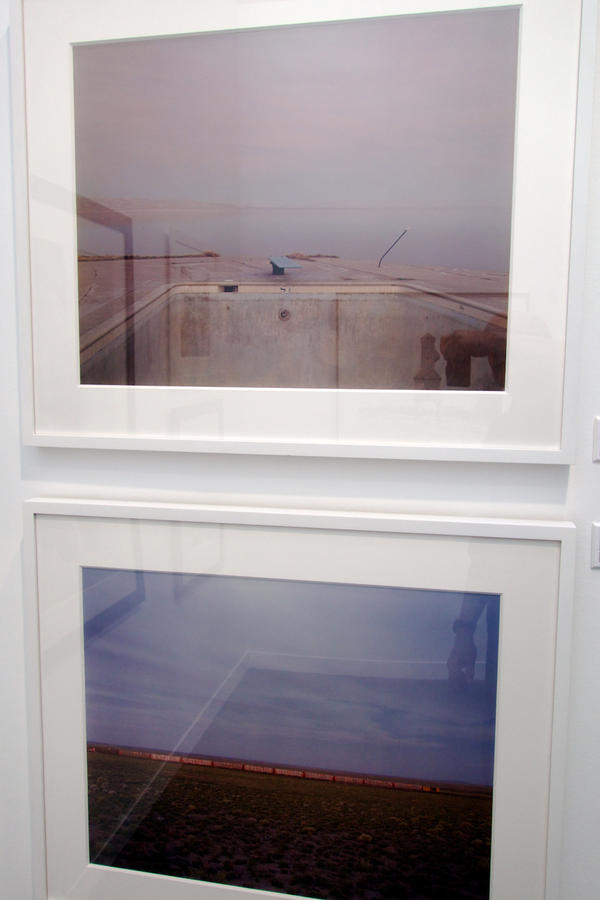 This got me thinking that perhaps the public's appetite for the new is voracious and galleries don't think that by showing established artists they will do as well. Maybe someone like Misrach is already represented everywhere.

I found these fascinating: 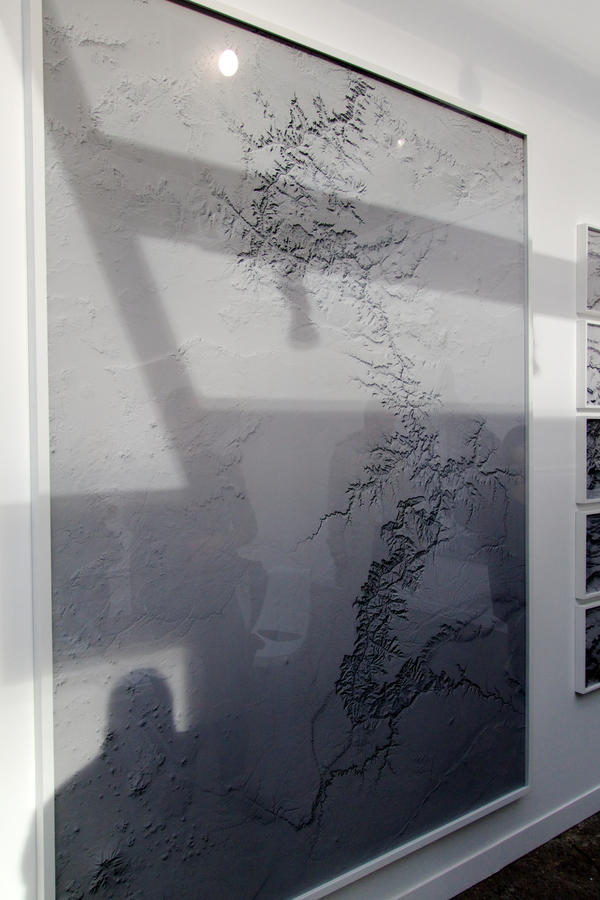 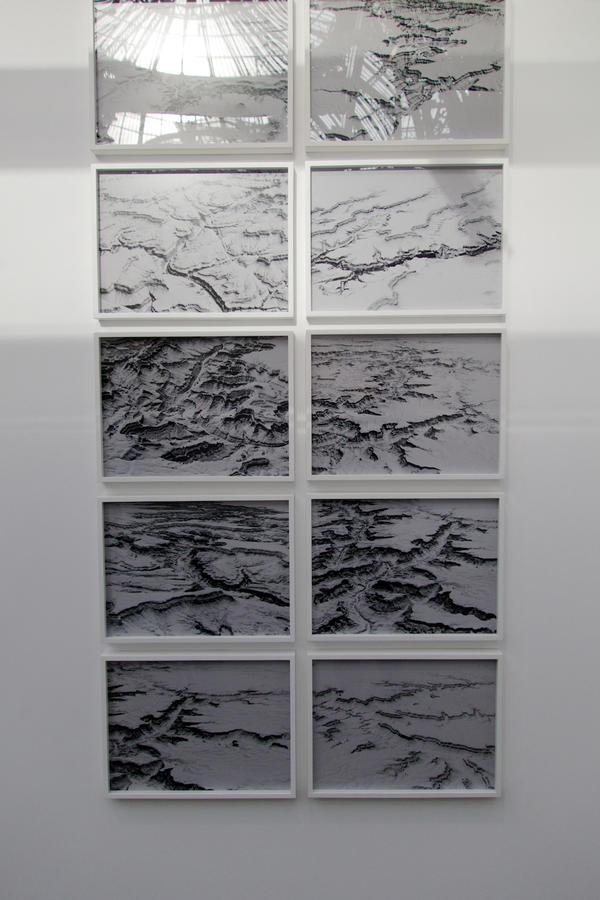 which weren't made so much by the photographer as "reassembled" using NASA pictures from satellite views of the Grand Canyon. They were a little cold feeling and by a German photographer.

You'd think these French gallery guys would want to engage with the public a little more: 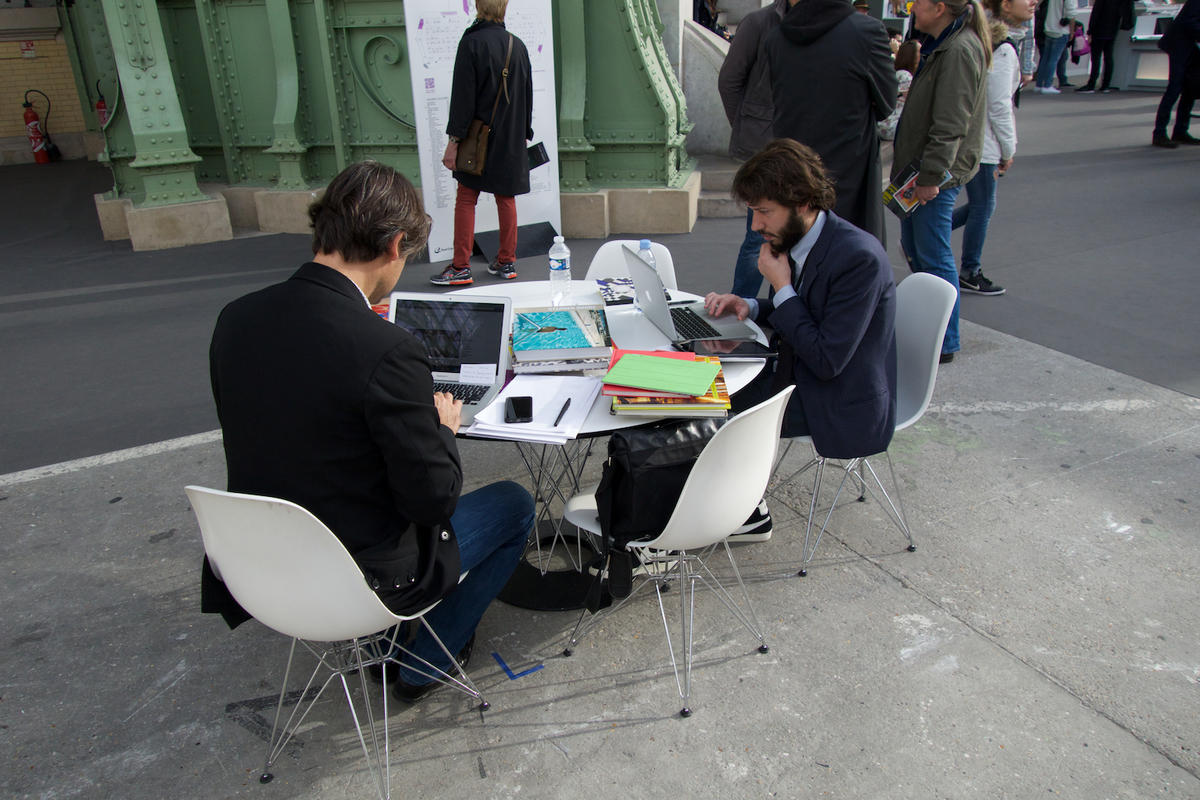 And this was telling: older dude, presumably with the fat checkbook, there with his young lover or possibly daughter choosing which one they wanted to buy. 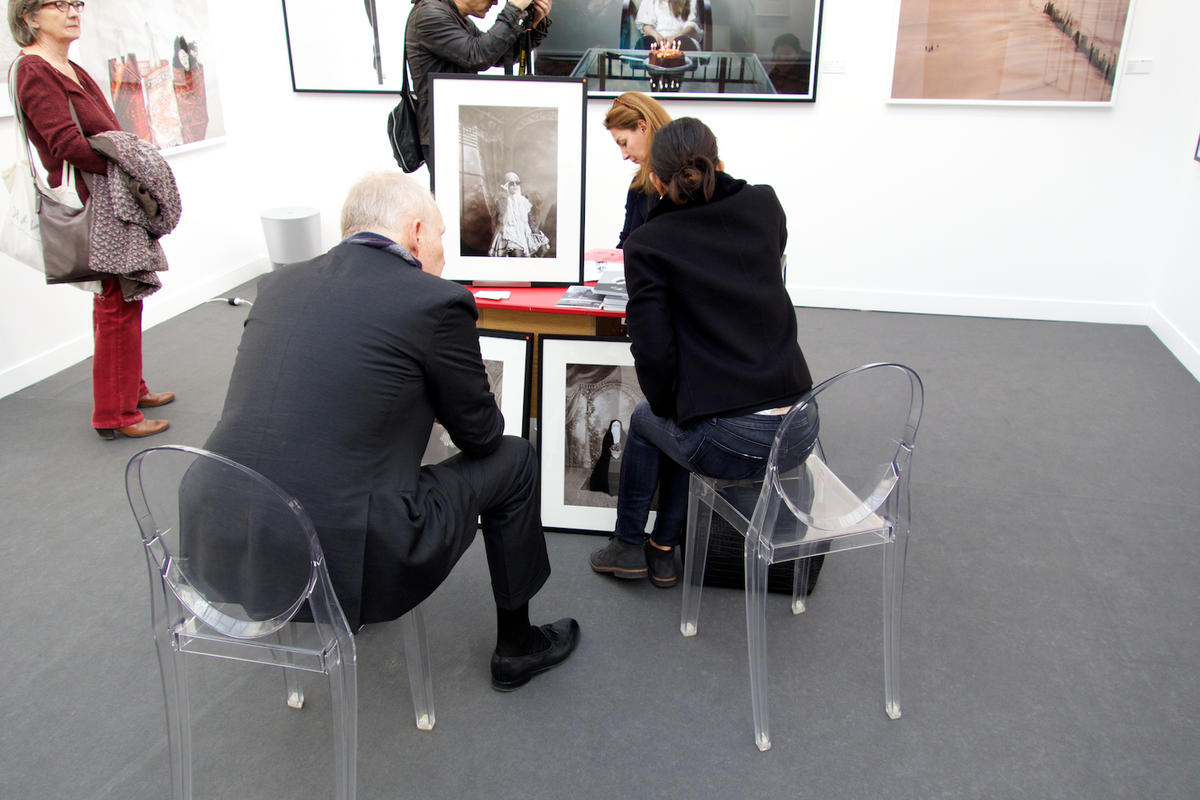 Finally, for this post, we'll finish with these which were a little bizarre but fun to look at and see how the artist worked: 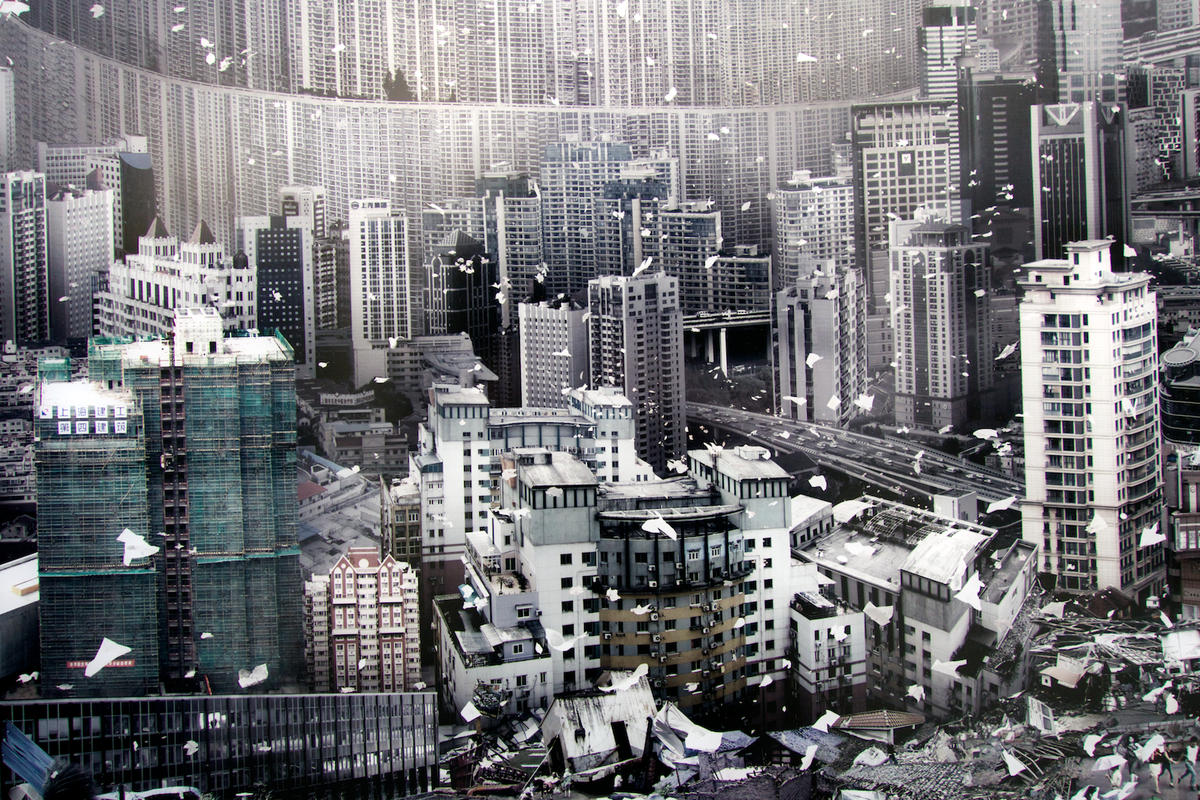 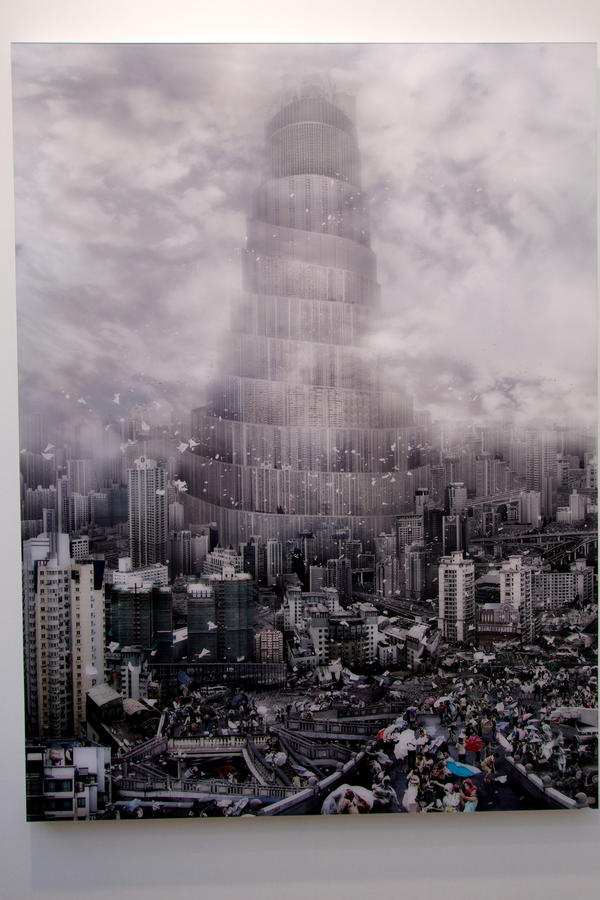 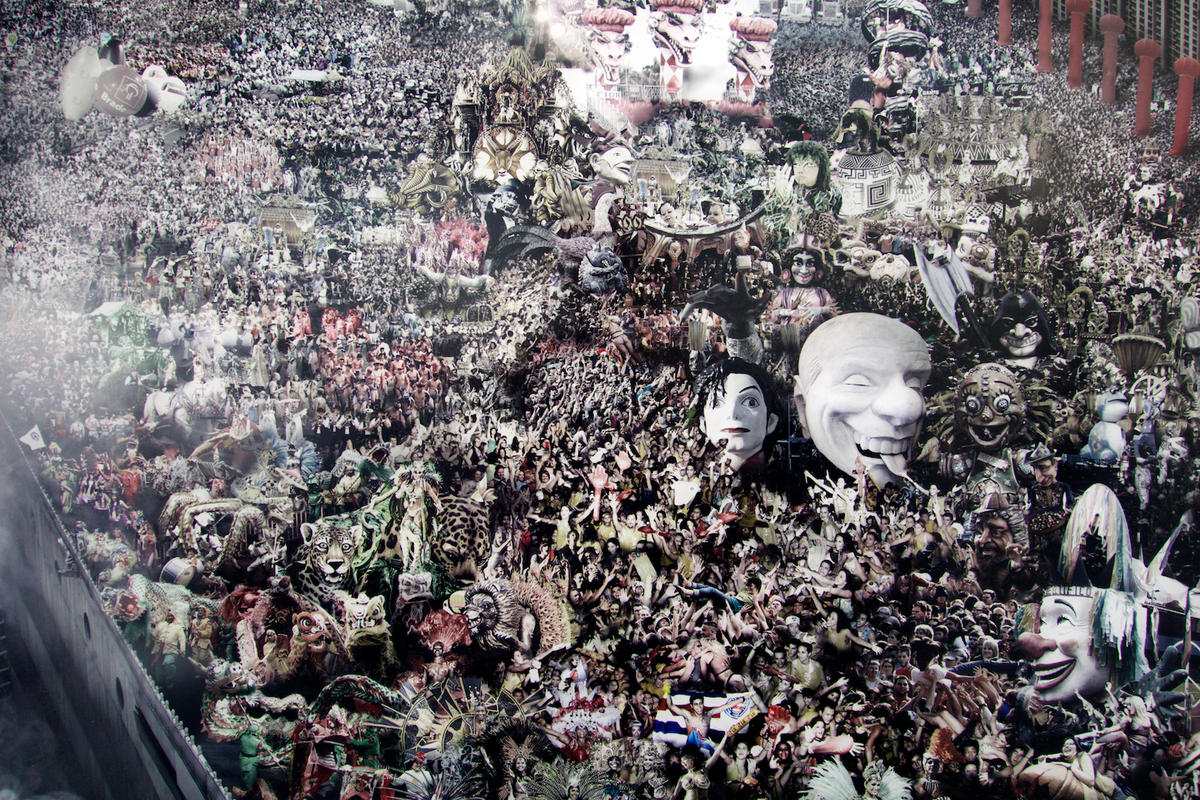 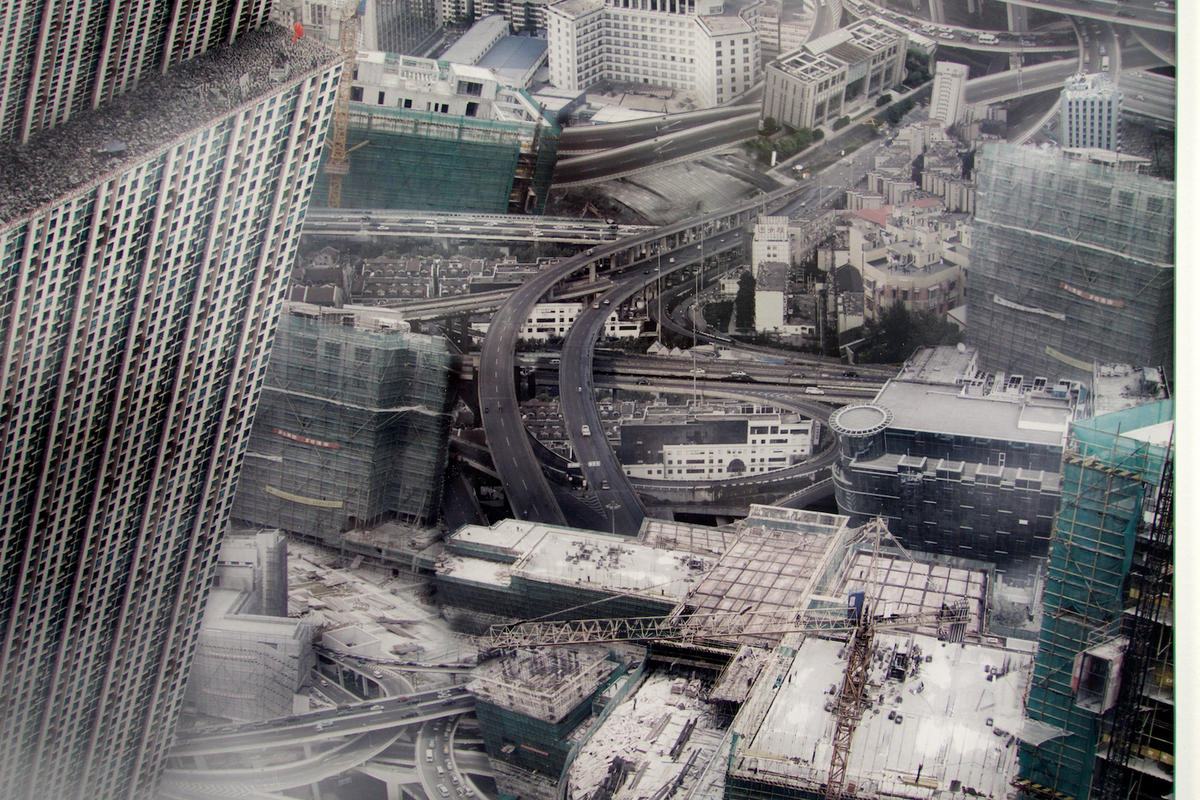 The show for me? Overwhelming, frustrating, enjoyable, educational, informative,  helpful (as an artist), made me angry, made me laugh, made me proud to be a photographer, impressive, depressing. Go again? Absolutely.

Next post will finish my review of Paris Photo 2014.