In numbers 13-16 we will begin to ease out of the series and then come to its ending. But there is still some work to do and I had some more to say. 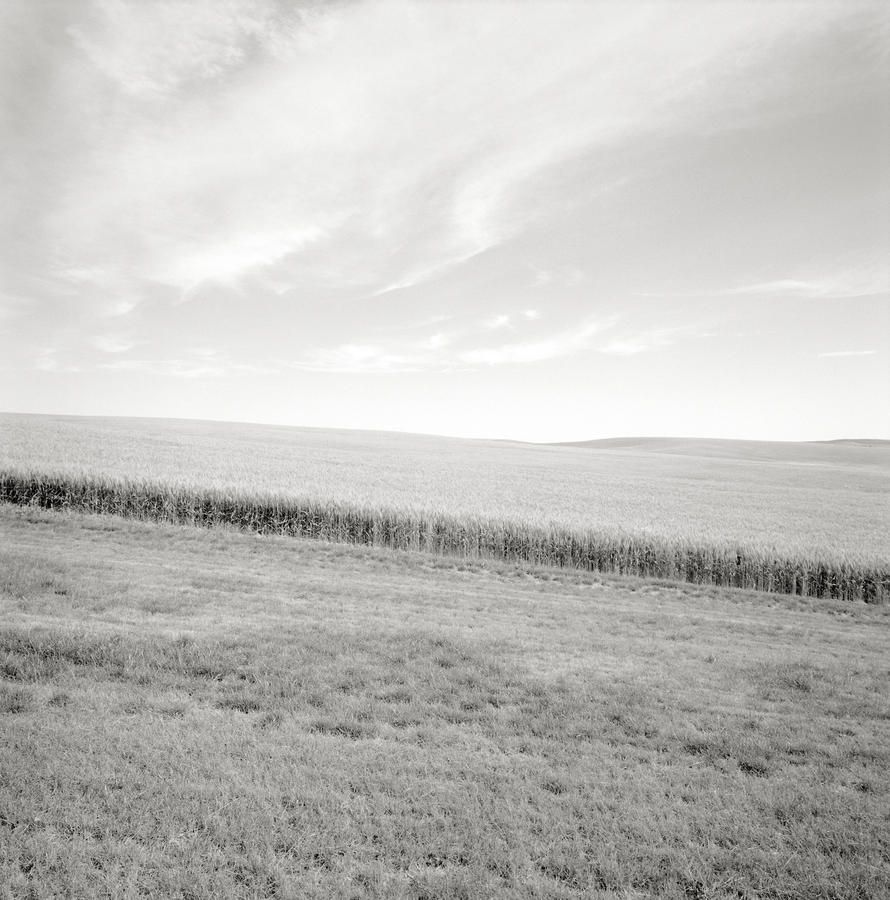 brings us back, once again, to the view looking out. This is the third time I did this, point the camera out to the reduced content of just grass, wheat and sky and it reinforces the concept of using "threes" within the series. Music has been an  important influence to me throughout my career and this is apparent in the Oakesdale series. It is born out by these three frames as they ground the series in the rhythm of the "facing out" approach. 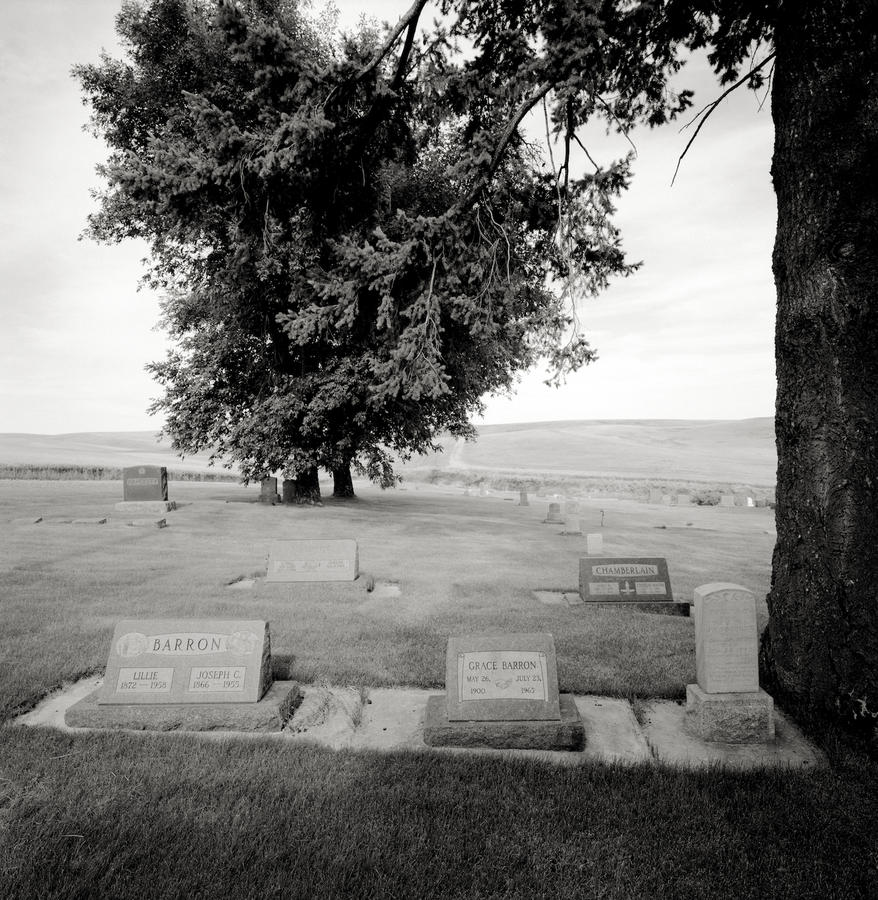 Number 14 is a very different photograph than the rest. For it to be framed so closed in on the right side isn't something you've seen before and the branch hanging down in the middle is intrusive to the rest of the image and practically obscures the two trees behind it. Why? For weight. For me this picture is another "core"picture to the series in that it has a very straightforward approach to these graves, that it acknowledges that there are dead people in the ground below those stones and that the world goes on after we die. I have a friend who owns this print and I will never forget her reaction to seeing it for the first time. She took in a big gulp of air as though she was shocked by it and then cried. 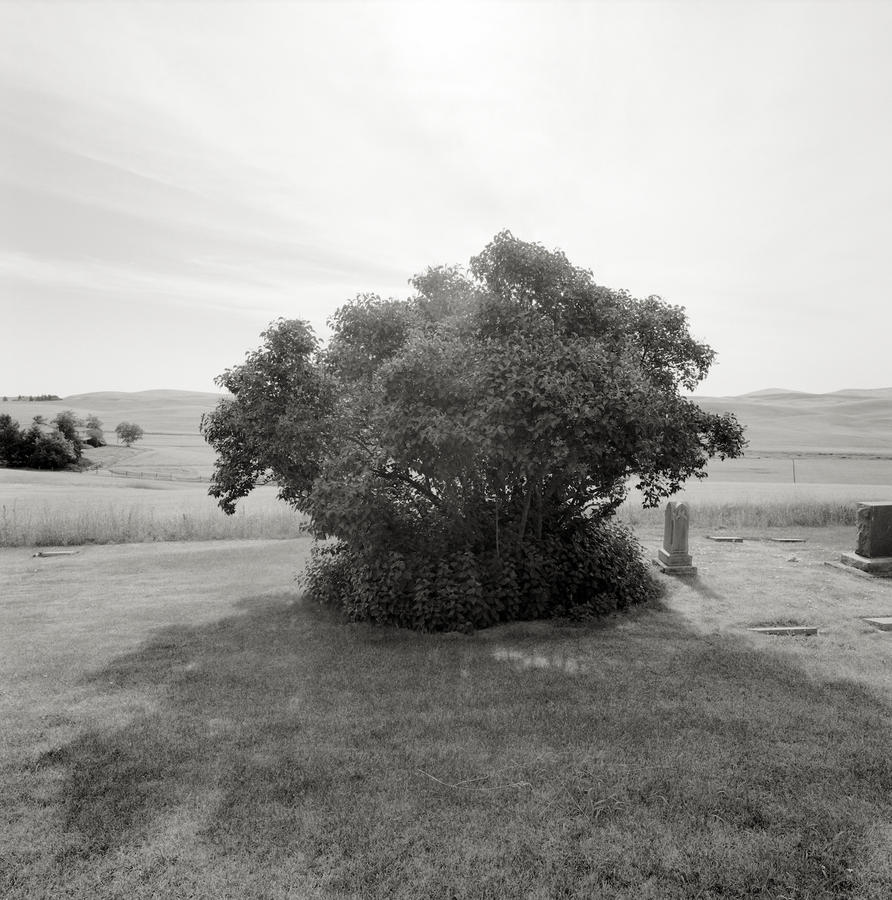 Now we are definitely on our way to ending this body of work. Many of my pictures acquire nicknames and this one has been titled the "burning bush" picture by friends. It actually is because I am again at the edge of the cemetery but this time pointing into the sun. I had a colleague at Northeastern where I taught who used to kid me about lens flare in my pictures. The Superwide would flare very easily due to its lens taking in such an extremely wide angle. I tried to use what it did creatively and in this case its lens flare was intentional. See Hershey, PA for another use of intentional lens flare. 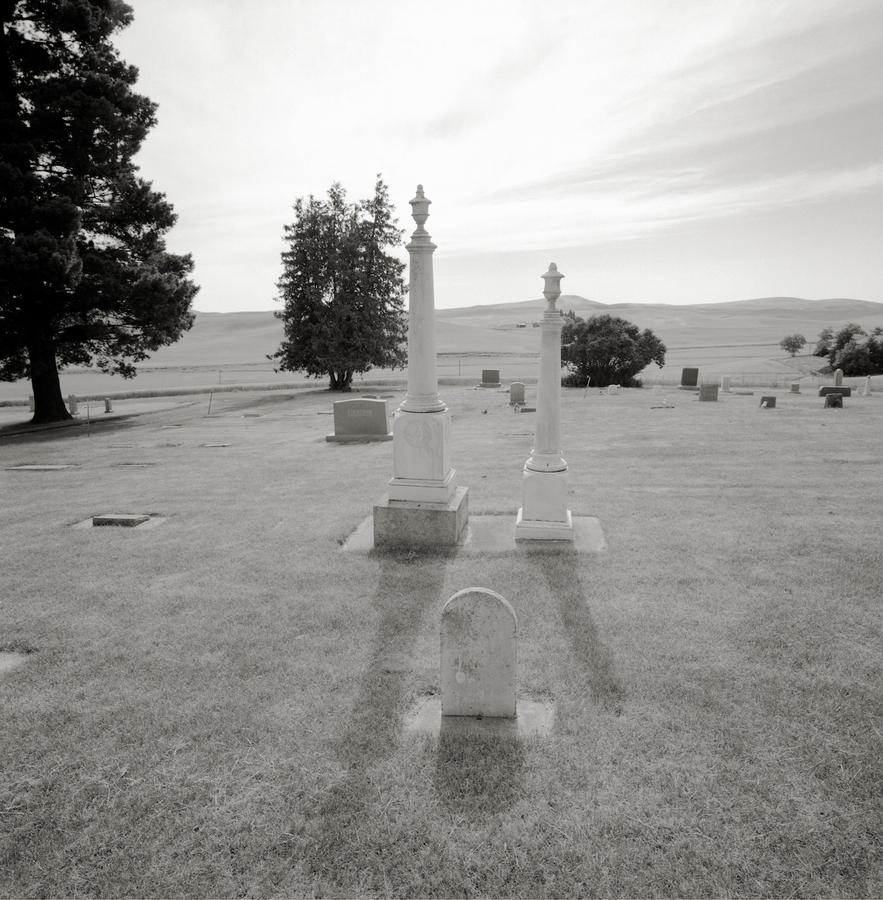 is taken at the same angle as the "burning bush" picture previously but I have backed up to make this picture, to include more of the cemetery and less of the wheat fields. In this last picture in the series, I wanted to show that the cemetery was part of the overall landscape, as opposed to being separated from its surroundings. Notice that there is no lens flare here. I use a technique that has me standing there with the camera held up to my eye, holding it with my right hand and then using my left hand and arm to throw a shadow across the front of the camera to keep the lens from flaring. I did that here.

Now we've finished the "Oakesdale Cemetery" series and I hope it has helped give you some insight into how I see and work. Far be it from me to assume or require that my interpretation of these pictures is the only interpretation. You bring your own precepts, background, education and aesthetic to anything you look at. Did I really have it so together in this group to shoot sixteen frames in just the right sequence? Hardly. I've learned I have to make about four or five times as many pictures to get a series. That was true here as there are four rolls of twelve exposures each shot compared to the final 16 photo-graphs in the series.

One more note about the Oakesdale series: For many years I combined music with my pictures when giving slide presentations. For Oakesdale I used the main theme from Thomas Newman's score for the movie "An American Quilt". I still feel it was a perfect fit.

I hope you've enjoyed this insider's look at some of my work. If you like this process, let me know. In between other things I plan to post about others' work, about some of my experiences from being a photography teacher for so many years, and about exhibiting work so many times, I plan on writing more about my series work.

As always, you can email me directly at: Neal's email