Hang on. This is going to be big.

For too long I have mentioned and referenced my work made in the 8 x 10 inch format but not shown it.  How can a visual artist who is looking at his work retrospectively late in his career neglect a major part of it?

Easy. It is a difficult and time consuming task to scan and clean the 8 x 10 negatives that I have. Thousands need to be reviewed, hundreds scanned, scores upon scores need to be cleaned and finalized for printing. Ultimately a few hundred need to be printed.

You need to remember that the format was never designed to be put into a digital domain. To put it here, we have to do considerable work.

This need is large, yet with a clock ticking on my time on this earth I admit I am a little overwhelmed. I am busy on various shooting projects and hate to take the time away to sit in front of a scanner for days or weeks on end. This is too big a project for me to do alone and I do not have the time or the resources to train and hire someone to do the labor.

I am considering a Kiskstarter project to raise the funds to make the negatives  RTP (ready to print), which would allow me to hire and train someone to make the scans and clean the files. What does this mean, to "clean the files"? Since the 8 x 10 makes one image on one negative that is 8 x 10 inches, it is also a great surface for scratches and dust. This has to be removed digitally before a good print can be made.

Keep that in mind as I show you some of what I do have from scanned negatives.

I have just spent a couple of days going through backup hard drives and my Raid storage to pull together many of the files that I have of scanned 8  x10 negatives.

There are so many I realize this will make up several posts. Here goes.

Logically enough I begin here with early 8 x 10 work. Here's one from outside Tucson, AZ in about 1986: 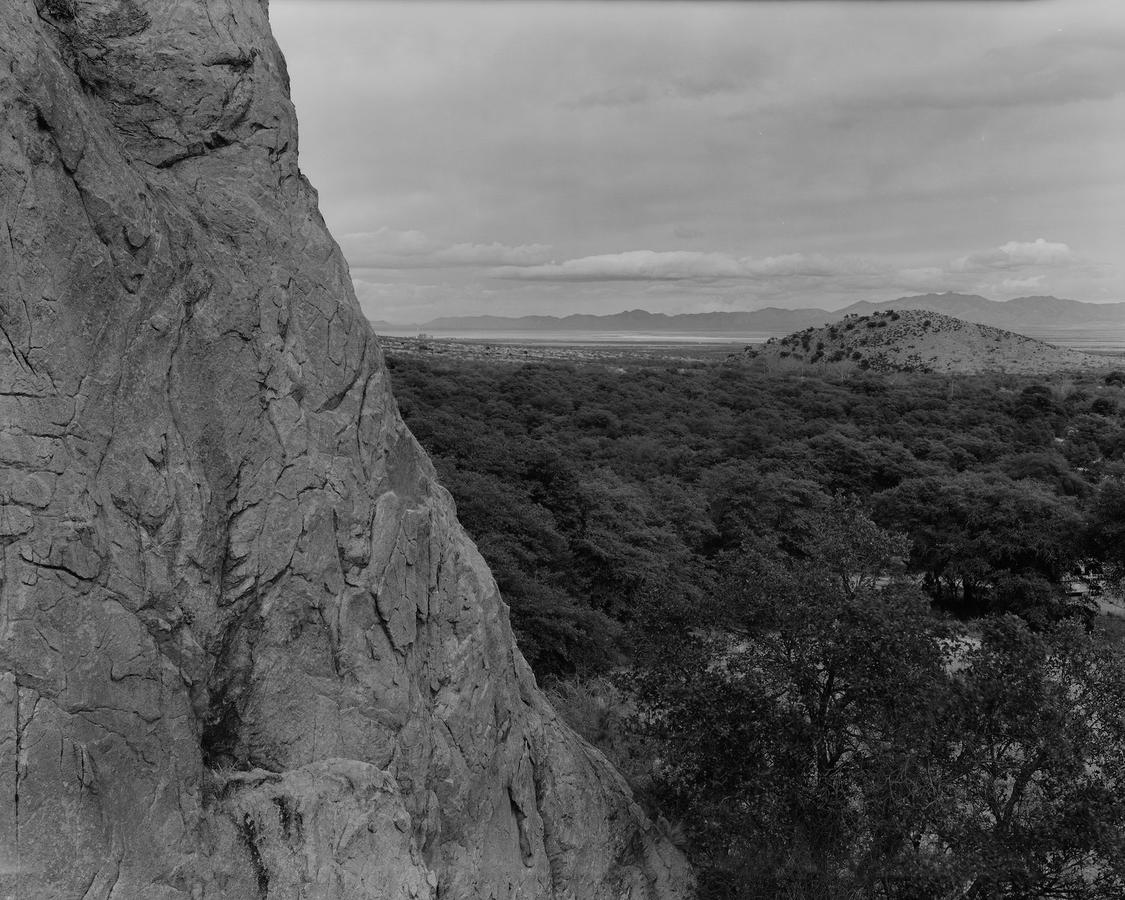 This was on a day trip with my friend, now long gone, Todd Walker, who taught at the University of Arizona in Tucson. If you look closely you can see the motorhome we arrived in back in the trees on the right side of the frame. I had to carry  the camera in pieces up the cliff, assemble it to make this picture and then bring it back down again in several trips. In the distance near the edge of the cliff in the distant background is a gas burn off plant. This photograph was used as the poster image for a one man show at Northeastern in 1986. The poster looked like this: 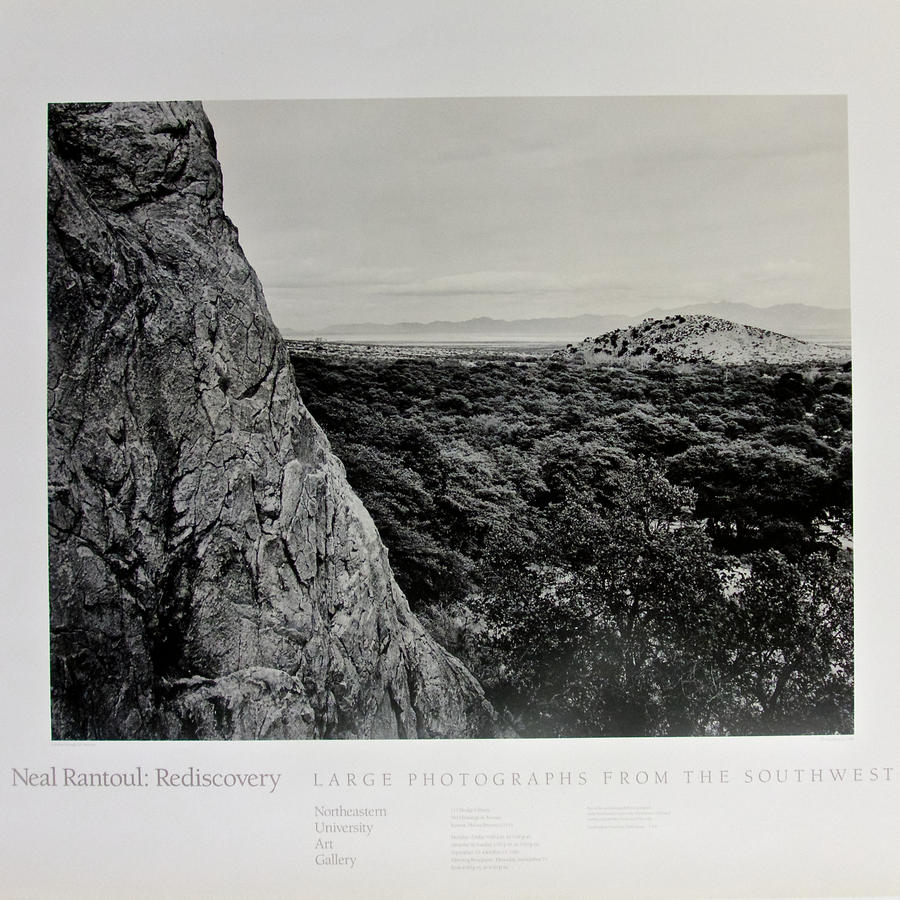 Why would I separate out this work from my other photography? This format just uses a different camera, right? Well yes and no. Much of photography can be split up fairly easily into different formats and 8 x 10, being large, tends to make pictures that turn out a little differently. One of the main reasons I used this camera was that the negatives could be printed very large at very high quality. This meant that something way back there like the gas plant could be seen in the 5 x 4 ft. print I made of it. This was important enough to me that I was all right with lugging over 50 lbs of gear around with me to make pictures. 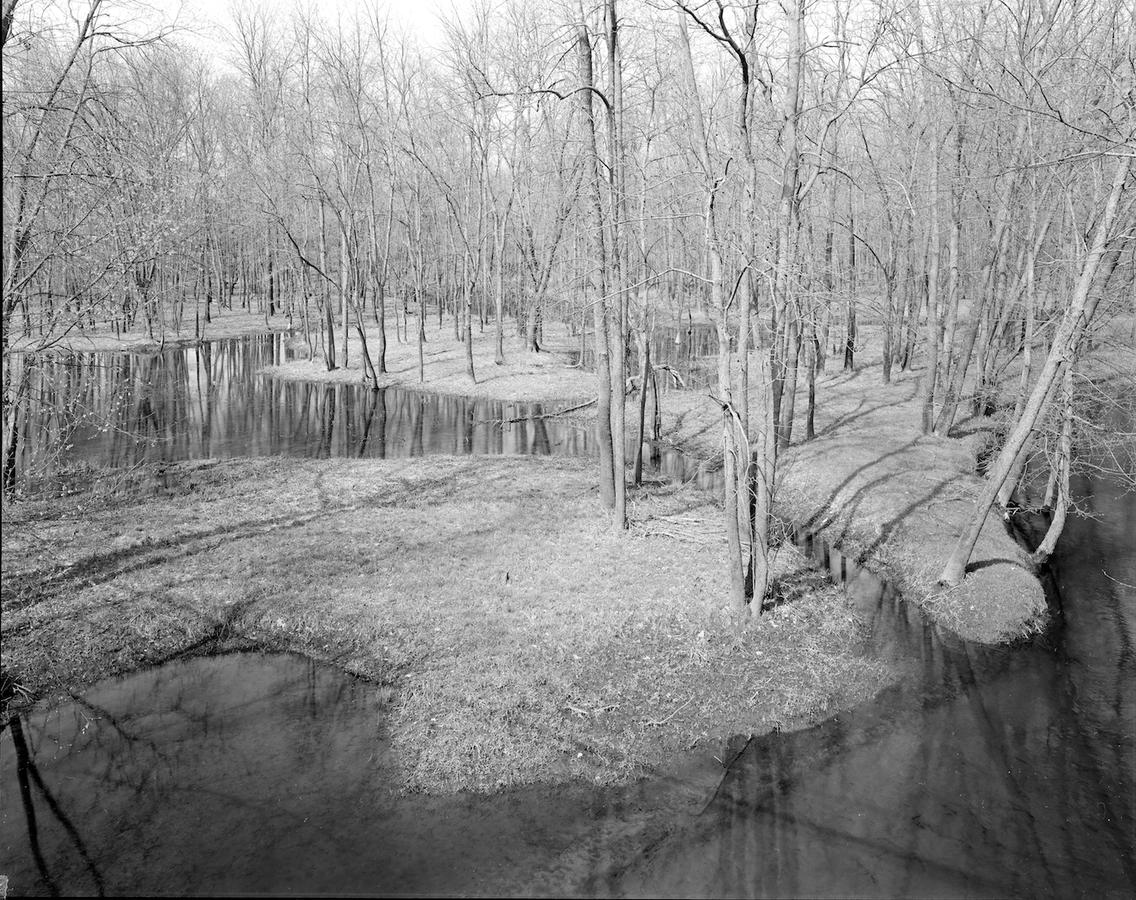 This one above is from outside of Hartford, CT in 1988 about this time of year, late March or early April, taken from a bridge over the stream. 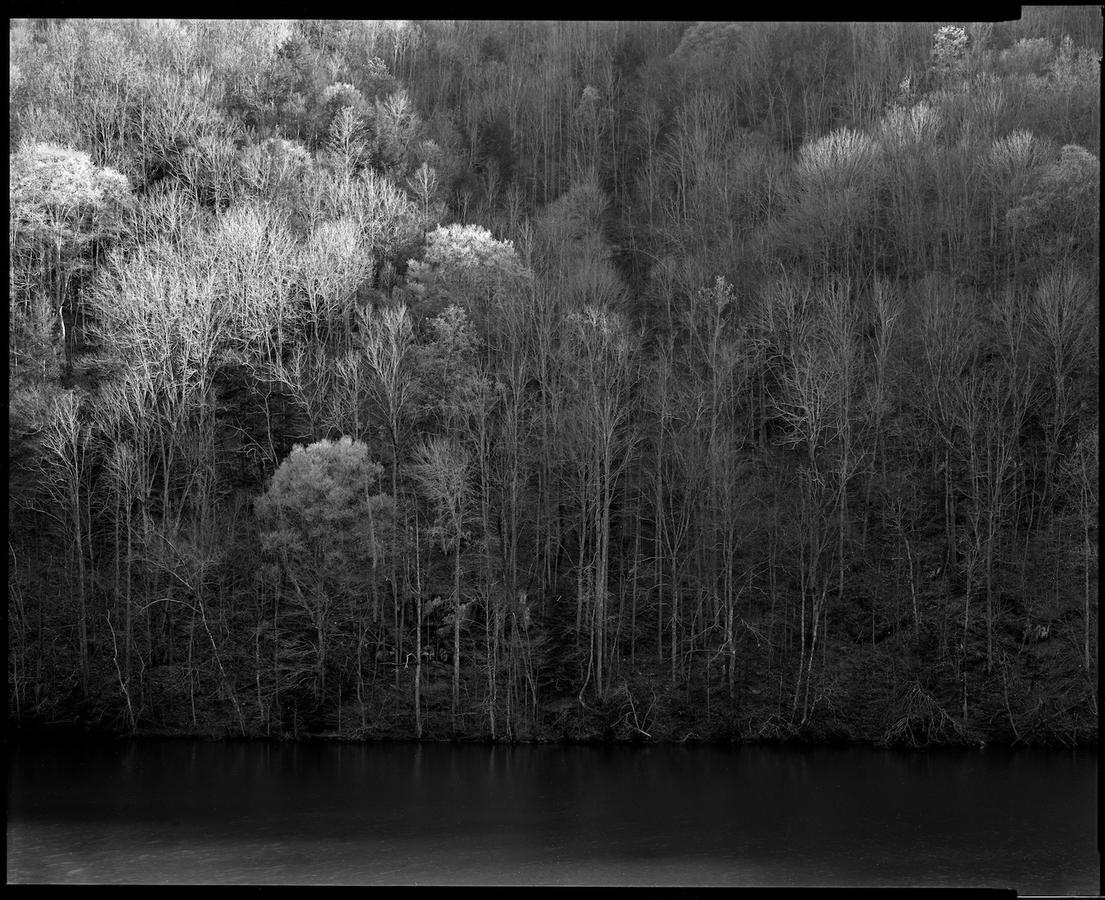 This one was made in Tennessee on a residency in Highlands, North Carolina in 1992. You can see the edge of the negative here, which was usually the way I scanned it. Most often I would not print the image with this edge around it. 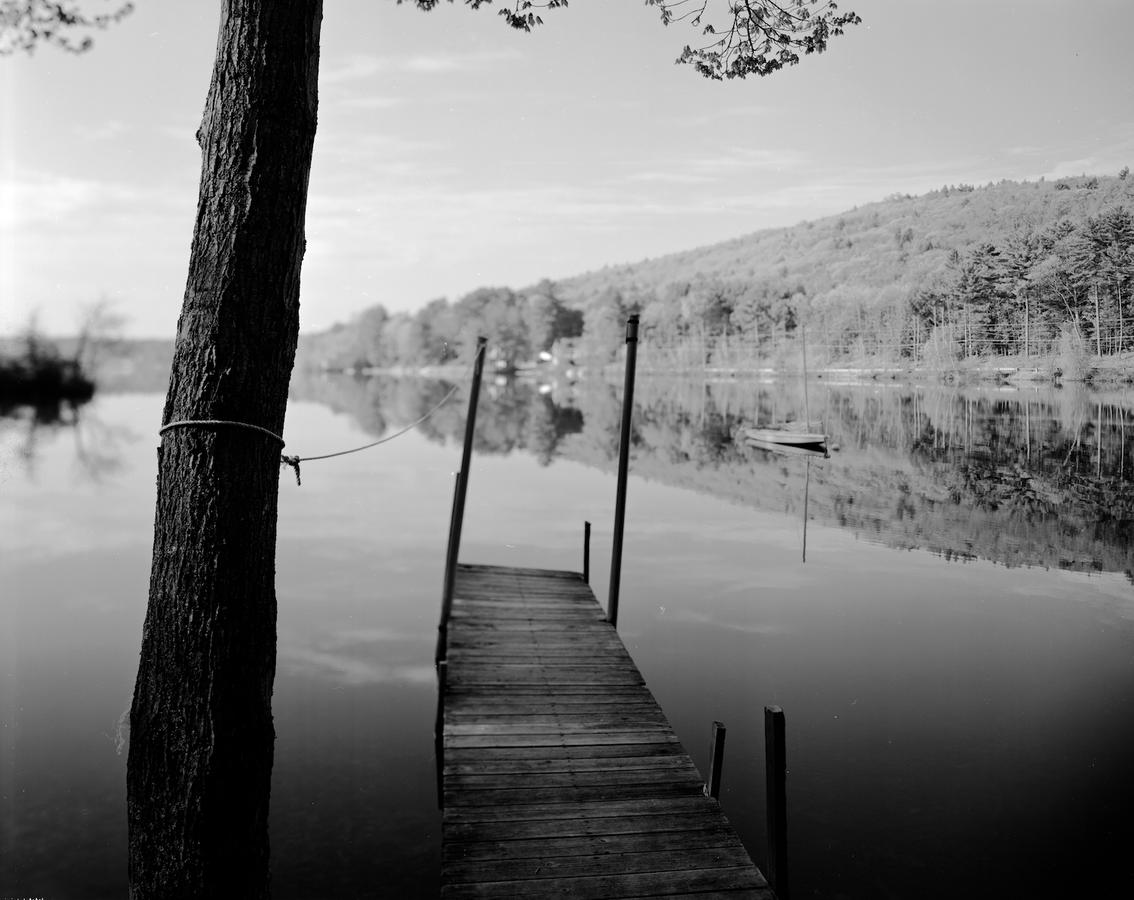 This was made in New Hampshire in the summer of 1986. For this one I swung the back of the camera to contain sharpness from the tree on the left through the boat and then to the right side of the frame in the background. This is another reason to use a view camera. The same effect can be done now using a Perspective Control (PC) lens with a DSLR. Thing's change.

Let's look at one more then I will close out this post: 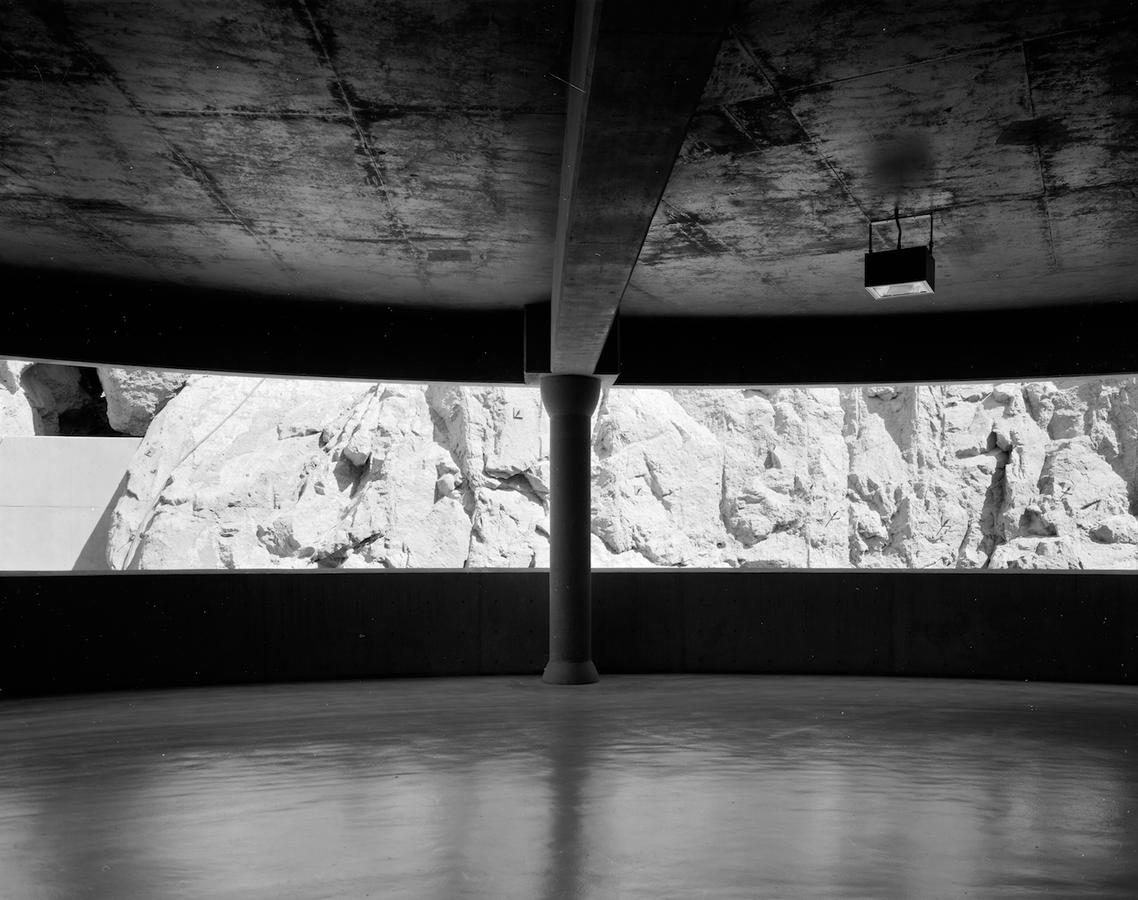 This one is a little later about 1997 or so. Taken in the parking lot of the Hoover Dam near Las Vegas. The parking lot at the Hoover Dam is about the most beautiful thing I've ever seen. It is a sort of Rolls Royce of parking lots and not to be missed. It's color is a red rust and it even has stainless sreel fittings and hardware. Oh, and the dam is pretty cool too.

I have several favorite stories about working in 8 x 10, of course. This one concerns Fred Sommer, a wonderful and hugely enigmatic photographer/artist who lived a rather reclusive lifestyle in the hills above Prescott, AZ. I would go to see him from time to time and this time I had been working with the  8 x 10 maybe a year or two, so it must have been about 1986. Fred was probably the best printer....ever. He was known to make 12 pictures a year, working on each one for a month with a live-in assistant. If you ever get a chance to see his picture of the amputated foot it will be a revelation. There are very few copies but Harvard's Fogg Museum has one. 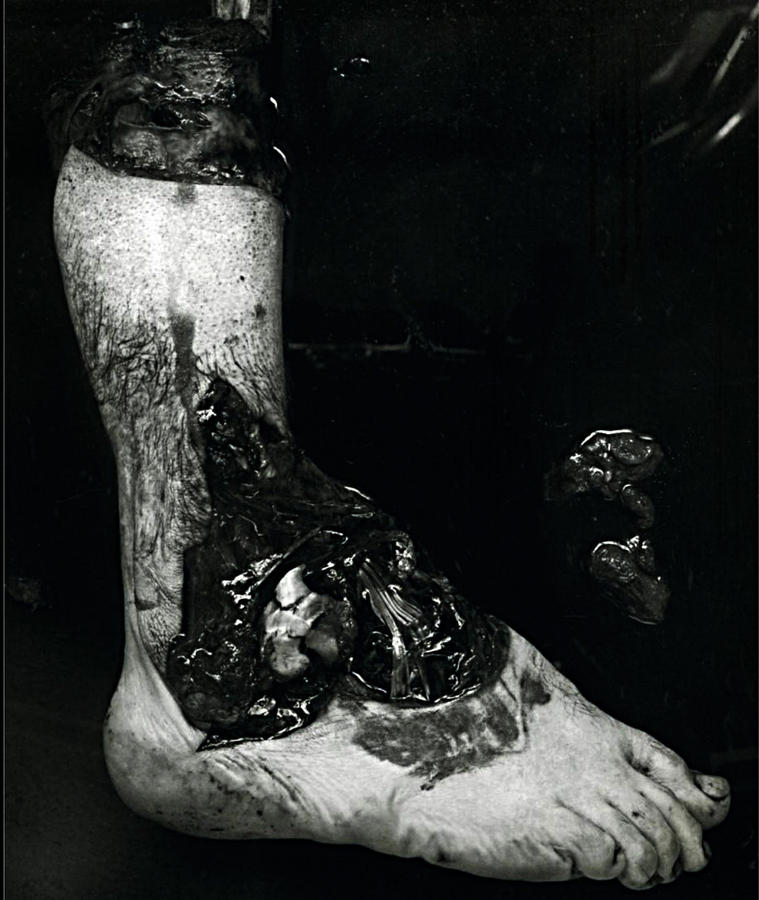 There is a story within this story about how he got the foot, but perhaps another time.

This trip I had brought a few prints with me made with the 8 x 10 camera. I thought after this amount of time using the camera, I had it nailed. This was Fred's format. He looked over my prints and in his soft spoken and understated way told me that I had made a "good start" and to keep working. Clearly I had a ways to go and as I would learn later, he was right.