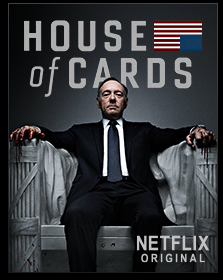 Since arriving in San Diego about a week ago I have been streaming the Netflix political series starring Kevin Spacey called "House of Cards". It's not bad.

I am struck how pervasive photography is throughout the series. Every time we are taken inside someone's office or home there are framed photographs on the wall, usually black and whites. Is this because a Netflix producer is a fan of photography or is it that photography is now completely mainstream? I wouldn't be surprised if it was  both.

There is an archetypal photographer in the series named Adam; British, lanky and worldly, who's chasing Kevin Spacey's wife. He shoots famine pictures in Africa and he is much admired. This points to photography's legitimate place in the social hierarchy of political life in Washington, D.C.

Excuse the rambling but this thinking then led me to another inescapable truth and that is that with photography's place in the mainstream, we are all photographers. Think back to an earlier time, when black and white was art photography, that to make a good print in the darkroom was masterful and the print itself was magic. That using a big camera on a tripod with a dark cloth over your head was a sort of "validation" that you were serious, good and superior to those that used smaller amateur cameras. That print quality was its own validation of the quality of the photograph, however banal, boring and insignificant a thing it might be. (This last concept will be the object of a future post: Big Camera Bad Photographs.)

All that is so completely over it shocks me to think how fast it happened. When you read a post from me and look at an image I've put up it matters not one bit what it was made with. Smart phone, point and shoot, DSLR, 2 1/4, 4 x 5, 8 x 10. No difference. This screen-based world we live in now, at 72 dpi, is the great universalizer of our imagery and it levels the playing field, making it almost impossible to distinguish between the rank beginner and the veteran pro.

One would hope this might speak to perhaps a greater democracy in photographs being defined as "art". Excellence in imagery would presumably be the criteria. But this is clearly wishful thinking. The best photographs will "win out"? Probably not. There are too many people with positions of power with not a clue determining what will succeed and what will not. There are too many insider connections and favors being called in. Am I being too cynical? Visual art and photography specifically has to be way up there in "who you know-ism".

This brings me back to the "House of Cards" drama on Netflix. It is about how a senior congressman (Spacey) succeeds through  manipulaton, lying, scheming and scamming to get bills passed, friends into high office, or a library built in his name.

Why would we assume that art would be any different?

To quote Kurt Vonnegut, "And so it goes".