Day 2 with Fred Sommer began much as Day 1 had, minus the emphasis at breakfast on the life of Albert Einstein.

After breakfast we took up our respective positions in the studio and Fred asked if there were any issues or questions I had about anything covered on the first day. I asked for some clarification on a few points and admitted that I was having some difficulty with the fact that he was using common words in the English language differently than was the convention. Fred would use them but they would mean different things. He found what I said amusing but offered that learning new definitions for terms was basic and important and that to be inflexible would inhibit further progress. Okay. I said that I understood.

And so we began the morning, this time advancing faster and with Fred stating his position with perhaps a little less restraint and perhaps a little more forcefully, as though he was no longer holding back as much for the neophyte in the room. I found the material extremely challenging but felt it inappropriate to interrupt Fred as much I had the day before. The assistant wrote a great deal the second day and also asked fewer questions as well.

Lunch came and went, much as it had the day before and I remember it occurred to me that it seemed I was having a somewhat choreographed experience, something if not "staged" then at least made before to others, perhaps in exactly the same configuration I found myself in, the assistant off to the left, me in the middle and Fred on the day bed to the right. But after lunch there was an element to the presentation of Fred standing out on a ledge, somewhat precarious in that he was moving into new territory, either presenting ideas that were new to him too or at least presenting them in a new manner. This was tremendously exciting as I was there, a part of his working through theory and stating thoughts to me and the assistant for the first time.  This incredibly brilliant and educated man was working it out right in front of me and I was hearing it. And so I thought that perhaps this was something of a two way street, that I or someone like me was perhaps needed for all this to work. This was both an honor but also humbling simultaneously. Why? Because I could have been a crash test dummy for all it may have mattered.

Mid way through the afternoon Fred changed the pace considerably.

He asked if I was interested in music and if I was what did I listen to. I told him some of the standards which included symphonies by Beethoven and Bach and added the Mozart and Faure Requiems as well, also some Dvorak piano chamber pieces I'd heard at Marlboro the summer before, Stravinsky and Messiaen, as well as the Koln and Bremen concerts by the jazz pianist Keith Jarrett.  He said he didn't know those and I told him I had a cassette in the car that I would like to leave with him (which I later did). He thought that was a great idea and thanked me. This then led us to a discussion and a showing of some of his musical scores, sheet music drawn by hand, with different colors for different instruments. I hadn't known he was a musician and so asked and he said that he was not, but that a beautiful score would make beautiful music. I asked him if his scores had ever been performed and he lit up and said that yes they had. I wanted to know how they had sounded and typically Fred, he said that they were "beautiful to hear". 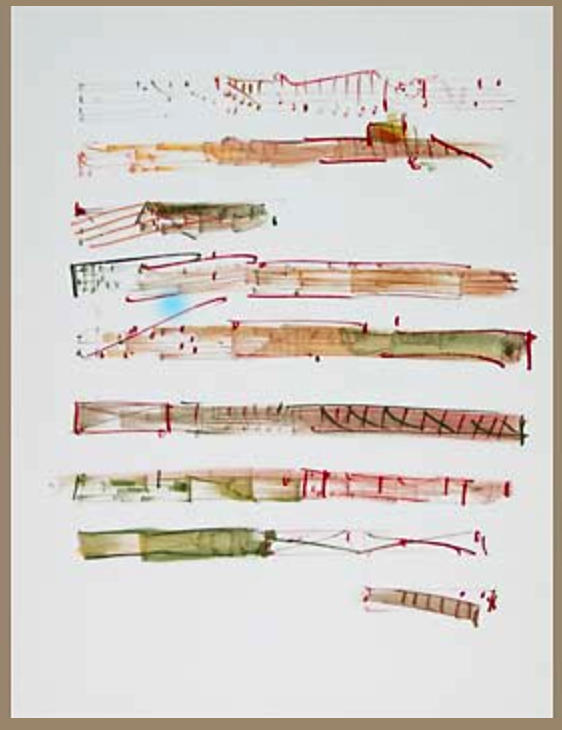 Clearly now we were on a different level, things were no longer so presentational but more conversational, less as in a lecture and more now in a give and take. I didn't know if we were finished but once again assumed that we would soon say our good byes and I would head back to my motel, exhausted once again and begin my long drive back east to home the next morning.

But evidently Fred wasn't quite finished yet. He asked if I could return at 8 a.m. the next morning. I answered that I could and he said he was looking forward to seeing me. Then I left, not quite as done in by Day 2 as I was by Day 1 but still very tired and feeling a bit like I had let go of something of my previous life and given myself over to this new awareness and process of looking at things through the eyes and mind of Fred Sommer. In fact I had grown up a little in those two days, with increased awareness of the complexity and the simplicity of things.

Enthusiasm is the duty of understanding before the night fatal to remembrance.

Footnote to the musical scores: Many years after Fred died, the RISD Museum in Providence had some special events around the anniversary of his death (Fred died in 1999, with his wife Frances dying six months later). One of the activities was that they had a quartet playing Fred's scores.