I wonder how many of you know the work of Fred Sommer.

If you don't this will get you started (from Wikepedia):

Considered a master photographer, Sommer first experimented with photography in 1931 after being diagnosed with tuberculosis the year prior. Early works on paper (starting in 1931) include watercolors, and evolve to pen-and-ink or brush plus drawings of visually composed musical score. Concurrent to the works on paper, Sommer started to seriously explore the artistic possibilities of photography in 1938 when he acquired an 8×10 Century Universal Camera, eventually encompassing the genres of still life (chicken parts and assemblage), horizonless landscapes, jarred subjects, cut-paper, cliché-verre negatives and nudes. According to art critic Robert C. Morgan, Sommer's "most extravagant, subtle, majestic, and impressive photographs—comparable in many ways to the views of Yosemite Valley’s El Capitan and Half Dome by Ansel Adams—were Sommer’s seemingly infinite desert landscapes, some of which he referred to as 'constellations.'"[1] The last artistic body of work Sommer produced (1989–1999) was collage based largely on anatomical illustrations.
Frederick Sommer had significant artistic relationships with Edward Weston, Max Ernst, Aaron Siskind, Richard Nickel and others. His archive (of negatives and correspondence) was part of founding the Center for Creative Photography in 1975 along with Ansel Adams, Harry Callahan, Wynn Bullock, and Aaron Siskind. He taught briefly at Prescott College during the late 60s and substituted for Harry Callahan at IIT Institute of Design in 1957–1958 and later at the Rhode Island School of Design.

I'd like to write about Fred in a more personal context in that he was hugely important to me in a stage of my career when I was looking for more clarity and understanding of my work and the work of others. By the late 70's, six years out of graduate school, I was trying to figure out where I fit in the broader sphere of artistic expression in photography.  Was I a "player"? Meaning,  was I or could I make a contribution to the discipline that was significant? By this time I was showing (Dartmough College, Hampshire College, Addison Gallery of American Art, Tufts University, etc) and teaching (New England School of Photography and Harvard University) so there was some confirmation that I wasn't a complete idiot. Plus I was very passionate about making pictures. In fact, I worked all the time at it. But I had doubts too. I was shy, antisocial and felt inept in comparison to others who were climbing in their field faster than I was. I wanted success, meaning exhibitions in prestigious places, books, press coverage, and so on but wasn't willing or able to step into the world where that was happening and people's careers were being made. So I didn't.

So, I made work. In 1978 I told New England School of Photography (NESOP) that I would not teach there any more. My teaching at Harvard was only for the fall semester so I took off in early 1979 on a cross country road trip to shoot in the American Southwest. I would have left sooner but my aging Porsche 914 had rusted through a rear frame member the night before I was to leave. Getting this fixed took about three weeks. I left directly in late January from the dealership the morning I picked up the car and I was off. It was 9 degrees above zero out. Whoosh! I drove straight, heading south. VW's and Porsche's were air cooled in those days and so getting heat inside the cabin was marginal at best. I got to warmer places as fast as I could. After several days in New Orleans and Houston I eventually got out to Arizona and through using mutual contacts with care and making phone calls and some small acquaintance with Fred Sommer from when I was in graduate school, arrived at his doorstep on the scheduled day and at the right time in Prescott, Arizona on a Monday morning at 8 a.m.

It was Albert Einstein's birthday.

This turned out to be the primary conversation as we sat down to breakfast: Einstein's contribution to science and our understanding of the universe. It was Fred, me, Fred's live-in assistant and his wife Frances that morning.  Fred in 1979 was a senior and master photographer, rightfully acknowledged to be one of the disciplines moving forces, a surrealist of the first magnitude who made black and white contact prints of unsurpassed quality from 8 x 10 negatives, among other things.

After breakfast Fred suggested that the three of us move into the studio next door in his very modest home, while Frances cleaned up and headed off to work. The assistant, who had finished studying with Emmet Gowin at Princeton a couple of years before, sat down to my left in the corner of the room and brought out a notebook and pen with which to take notes. Fred took a daybed to my right and I was asked to sit in the middle in a comfortable chair facing the wall where many of Fred's most famous works had been made. Behind me was a wall of small panes of glass. This to provide natural light for his still lifes.

Fred asked if I was comfortable and was there anything he could get me. Did I need to use the bathroom? He asked how my travels had been and was I having a good trip? I said that all was well and that I was having a very good trip, making many photographs, meeting some wonderful people but sorry it was almost over. He said that he thought that sounded excellent and that he was pleased to hear it was going well and hoped when I returned home soon that all was well where I lived, back in Cambridge.

As these pleasantries were now over Fred began to talk. In a soft voice, with occasional interruptions from the the assistant or me, Fred talked all day. We did break for lunch, in which Fred prepared hamburgers on the stove in the small kitchen that Frances had brought up from town specially prepared for us by the butcher at the market, to Fred's specifications. For Fred most things were ritualized and cooking burgers was no exception. During lunch we spoke of other things, lighter things not so difficult to understand, as though this taking a break to feed ourselves was also a kind of recess from being back in there, in the studio. But after lunch we were right back in there, in the same positions as before, playing the same roles: the assistant as the recorder who occasionally would ask for clarification on certain points, me as the clueless newcomer to Fred's theories and use of the English language in a profoundly different manner in which I had understood it before arriving that morning. As the afternoon wore on, we were getting to several key points, there had been enough introduction to concepts and enough defining of terms to be able to actually get to the many points Fred needed to make. In his careful, systematic way, Fred graciously took me through each one, always concerned that I have a full understanding before moving on to the next. At the same time, it being winter, the natural light studio was darkening as Fred continued to talk. Slowly, as the light left the day, Fred was talking from a void, as I could no longer see him, but just hear his voice as he sat on the day bed next to me. This was incredibly eerie and mysterious and moving to me. Eventually he stopped for the day and then said that he hoped it had been a good day for me. I said that it had and thanked him. I, of course, assumed we were done. As I was getting my jacket on and preparing to leave to return to my motel in town for the night Fred said that he felt we'd had a good start and that he looked forward to starting again tomorrow morning at 8 a.m. for breakfast. After a pause I said that I too looked forward to our conversation tomorrow. Then I left with my head so full and having been so fundamentally altered by the events of the day I had dinner sitting at the bar of a restaurant not even tasting what I ate, drove back to my motel and went to bed, exhausted. 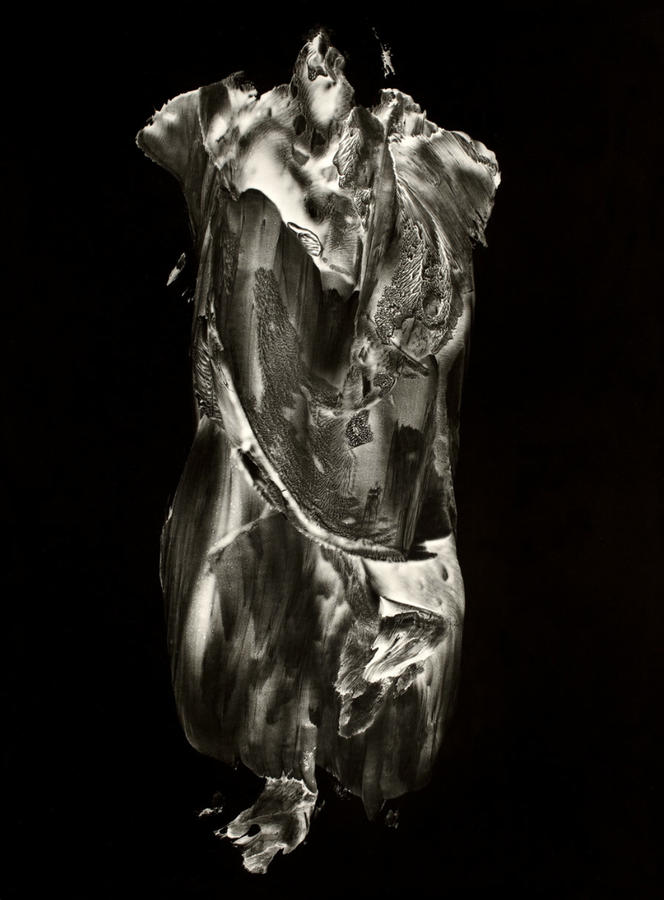 Paracelsus by Frederick Sommer circa 1957

This is one of the pictures Fred made made that involved no camera and used no negative.

For more information about Fred Sommer please go to:

Art is not arbitrary. A fine painting is not there by accident; it is not arrived at by chance. We are sensitive to tonalities.
The smallest modification of tonality affects structure. Some things have to be rather large, but elegance is the presentation of things in their minimum dimensions

I hope you can join me as I share the story of my second day with Fred Sommer at his studio in the winter of 1979 in Prescott, Arizona.