Since I've been writing about missing 8 x 10 work (Missing 1 and Missing 2) I thought I'd write about one of the few real series I did in the format: Blackwater Dam. I did promise to take a look at 8 x 10 color and I will soon.

I bet we've all got projects made but never seen, or at least never seen by the public  in a show, or never published somewhere. I know I do. Is the work less good? Or is it because it's been promoted less? I can't say that I know and it probably isn't for me to decide.

But because I write a blog that is about my work and I've just downloaded the Blackwater Dam pictures to the site, I thought I'd back them up with a little context and maybe a story too. The dam, which is one of five flood control dams in the Merrimack River Basin, is an Army Corps of Engineers project that was completed in 1941 for $1.32 million.

These are about as pure as landscape photographs by Neal Rantoul get. They aren't, of course, straight nature photographs at all. Although very beautiful, Blackwater Dam is as heavily managed a place as the wheat fields I photograph in Washington or the Dunes in Southern California.

I have always been fascinated by the banks of rivers, the foliage and detritus along the shore, the concept of mostly silent tons of water sliding by relentlessly pulled down hill by gravity. For a view camera photographer like I was rivers also allowed me a straight shot at the opposite bank, something one can't do while photographing while in the woods. This area near Webster, NH also lives up to its name: Black Water. 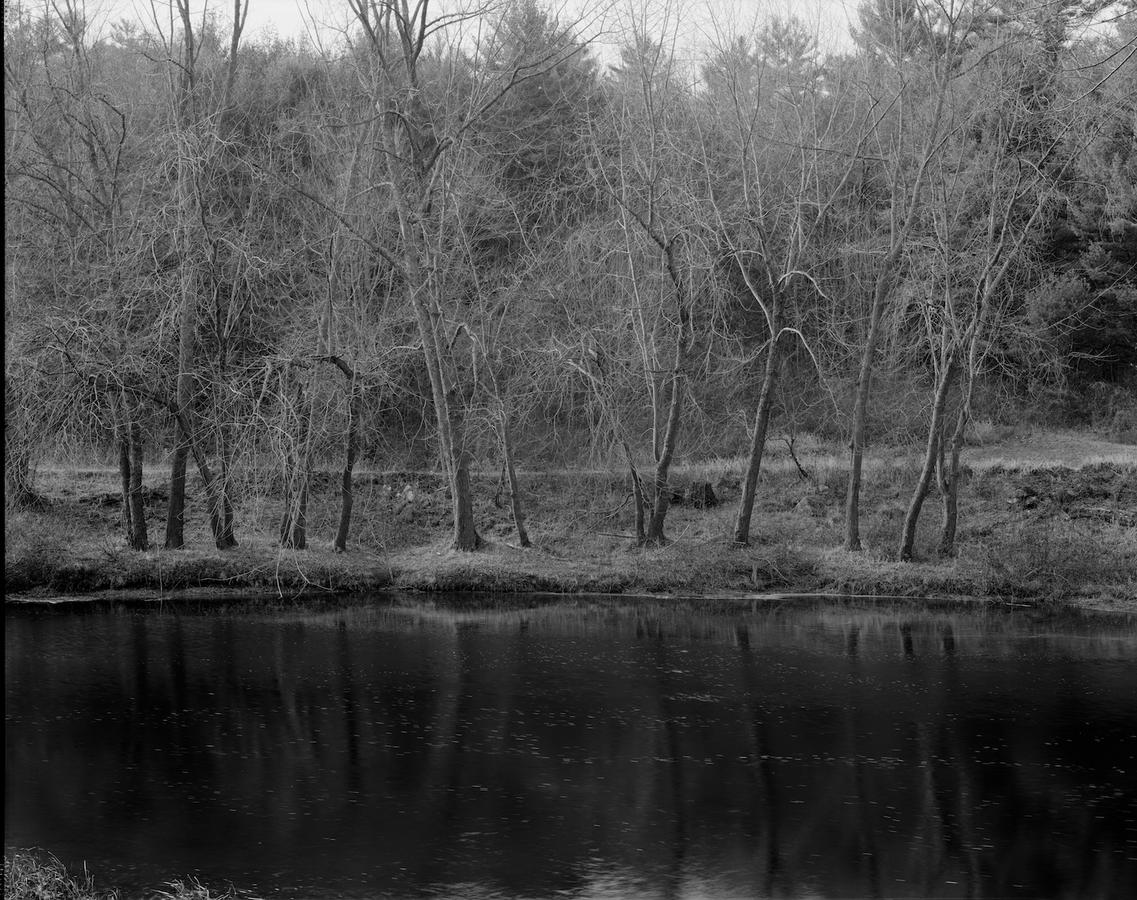 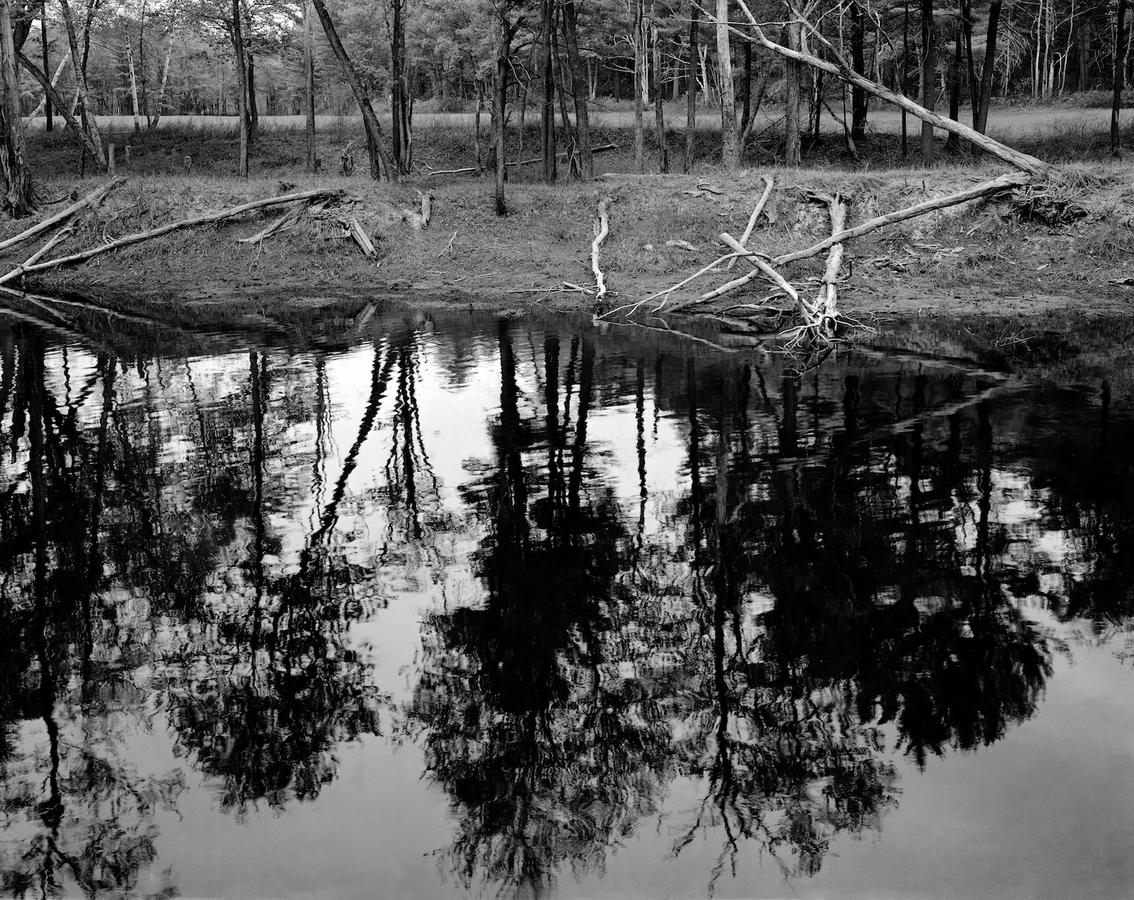 There is another piece to the components of this series and it is logistical. Webster, NH is about 1 1/2 hours from home in Cambridge. Often the pictures were made on Sunday mornings, when traffic was light and I had a free day or even a morning. 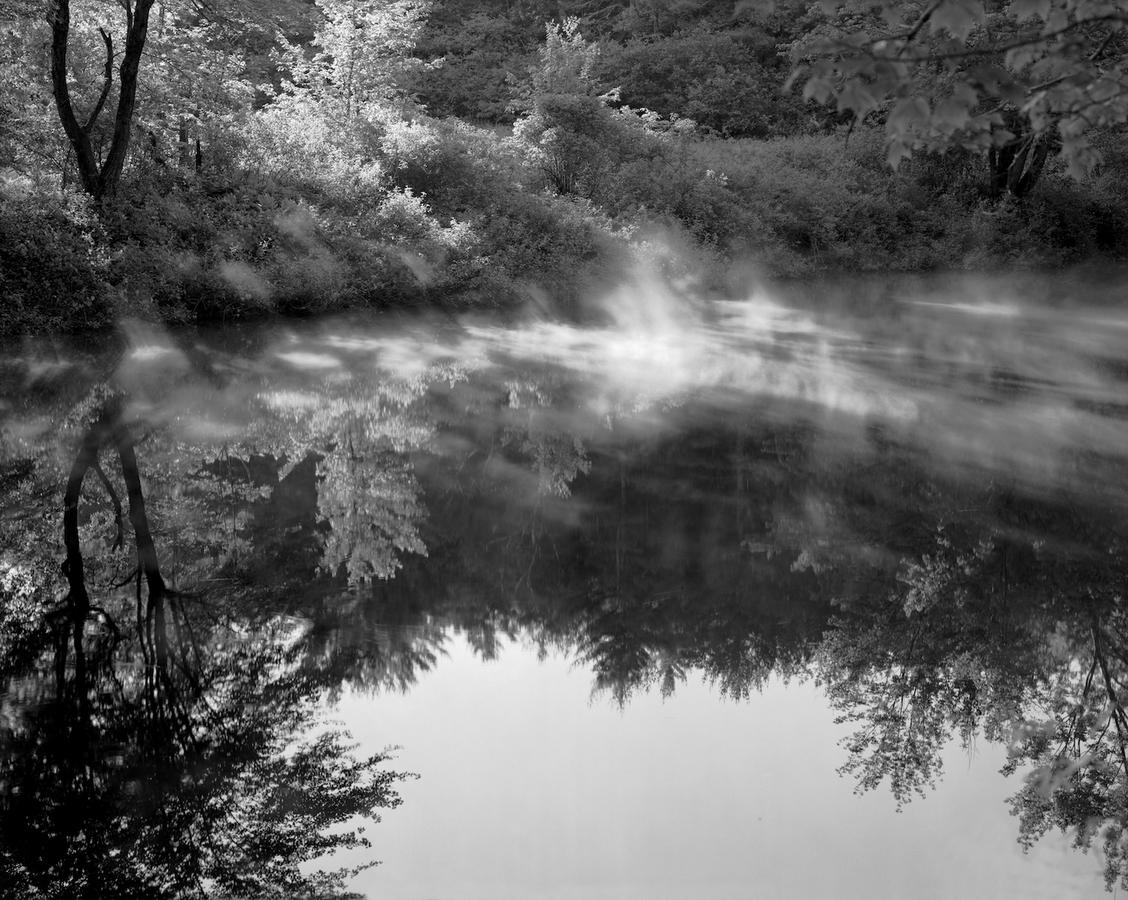 This was the kind of series where I might get one or two each time I'd photograph there. Of course, I would make more than that, but would end up using only at most a couple from each shoot. 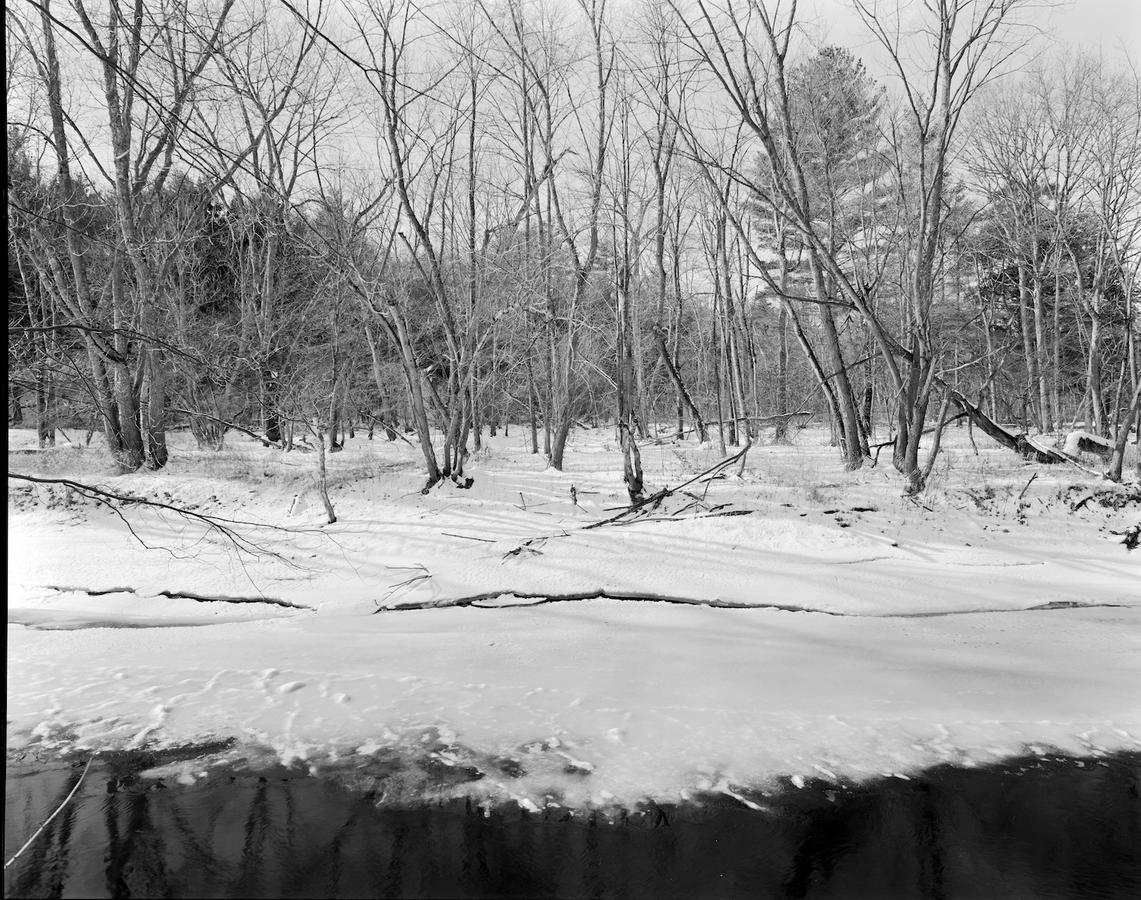 Blackwater Dam is a series caught in transition. While all made on film, the prints sit on two sides of the digital divide. I made many conventionally as back and white selenium toned 16 x 20 inch prints in the darkroom, just as I had for years. But by 2003 I no longer even had a darkroom as I had  given it up at Northeastern to create a student computer lab. So the full set of prints are made as inkjet prints and are larger at about 30 inches across than I could make in my darkroom, even if I still had it. 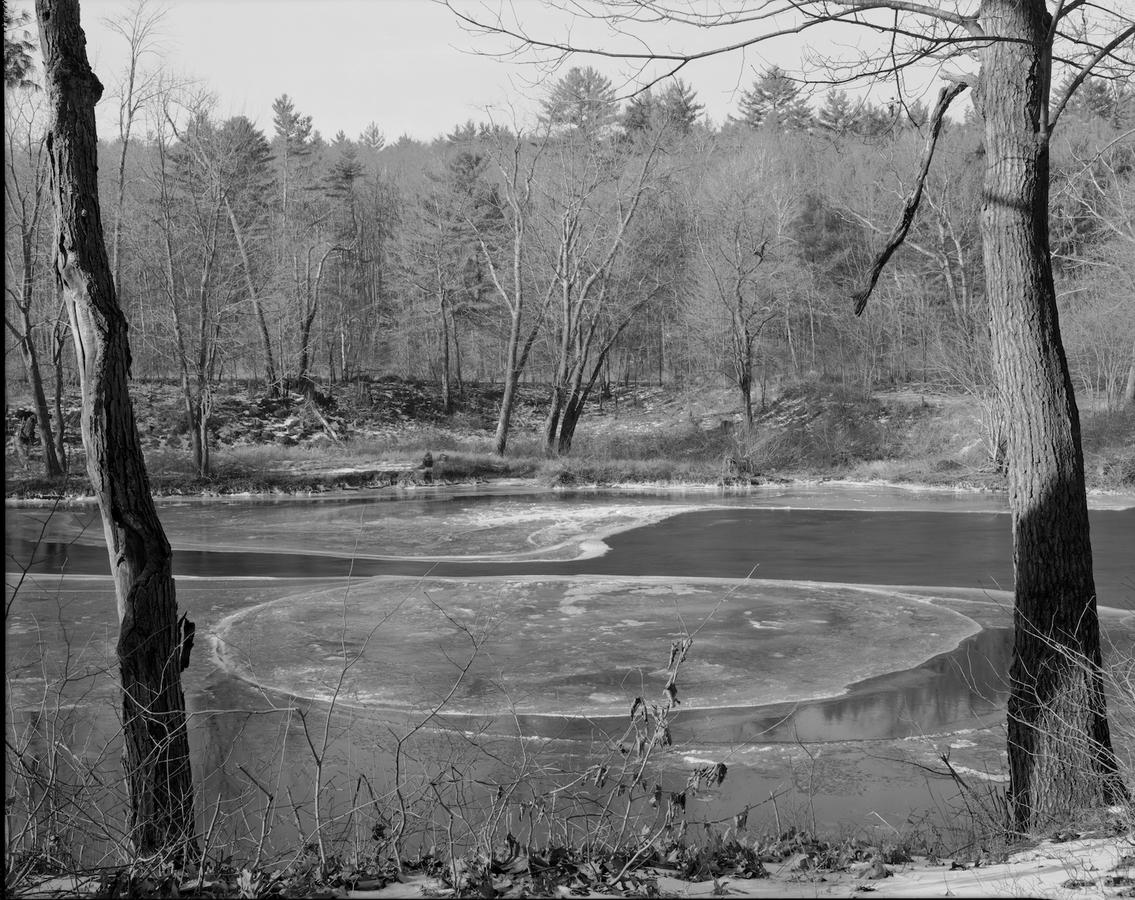 I still remember standing in front of this and watching in wonder at the silent force of the river's current slowly pivoting this large circle of ice around and around.  A remarkable sight and, as far as I know, I was its only witness.

A story, you asked? You've got it. One time, heading up to shoot on a Saturday morning I got to Blackwater, pulled my tripod out of the back of the car, unfolded its legs and set it up, ready to put the big Toyo Field 8 x 10 on and clamp it down. It was at this point that I realized I didn't have the connecting  plate that would wed the camera to the tripod together securely. Damn! Being  unusually brilliant I remembered that downtown Concord, NH had a photo store. Of course if I was really so smart I probably wouldn't have left the connecting plate back at home sitting there on my dining room table, would I? Anyway, I put everything back in the car and drove the 30 minutes to Concord and parked on a side street near the store on a slight hill, facing up the hill (this is important as you'll soon see). I locked my car, headed into the store, they had the plate, which I bought and so I was  good to go. Out of the store I go (I'd be whistling if I could then as I was very pleased with myself). I come around the corner to see someone parking an old rounded fifties type pickup truck in the space in front of my car. I see the driver and she's now parked, gets out of the truck and starts walking down the hill to Concord's main street. As she's doing this I watch the truck, now in what seems like slow motion, start to roll down the hill, driverless and dead weight, gathering up a nice head of steam as it slams into the front of my car, bang! which is low enough and pointed enough in front that the back of the truck slides right up onto the hood like it was made for it ending up practically burying my car's front underneath.

End of story? Pretty much, no photographing that day as my car had to be towed away so had no way to get back to Blackwater. Nor was I inclined as I was pretty shaken up. Is there any upside to the story? Well, I now had  two connector plates, which is about one more than you need.

You can get at all of Blackwater Dam here.