In the previous post (here) I introduced a new series of my photographs called the Benson Grist Mill north of Salt Lake City in Utah. I made these in September 2015. This post will continue to look at these new pictures.

We left off having just made a picture of the log cabin and we were clearly heading someplace new. I walked down a slight incline and across a foot bridge that crossed the stream and up the other side. 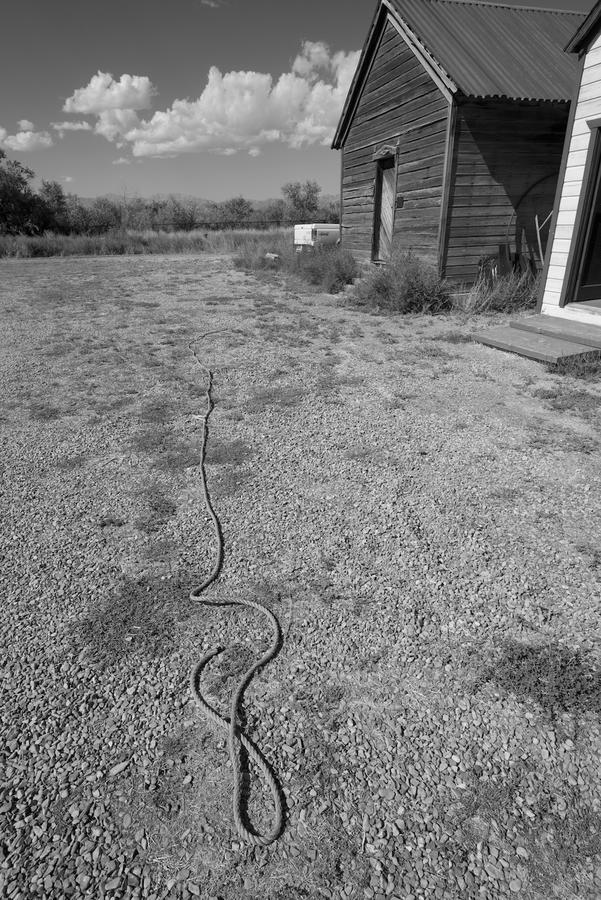 This is the only vertical in the project and now you'll see the connection from the power cord in the previous frame to this one, I am sure. Usually I don't move things in my pictures and this was true here. I have no idea why the rope was spread out along the gravel like this. In pointing down with this lens I've made another picture that is not neutral or "straight" but it was necessary to follow the rope from its start to its end. To me it is pointing us somewhere and the next picture puts us in place to see that. 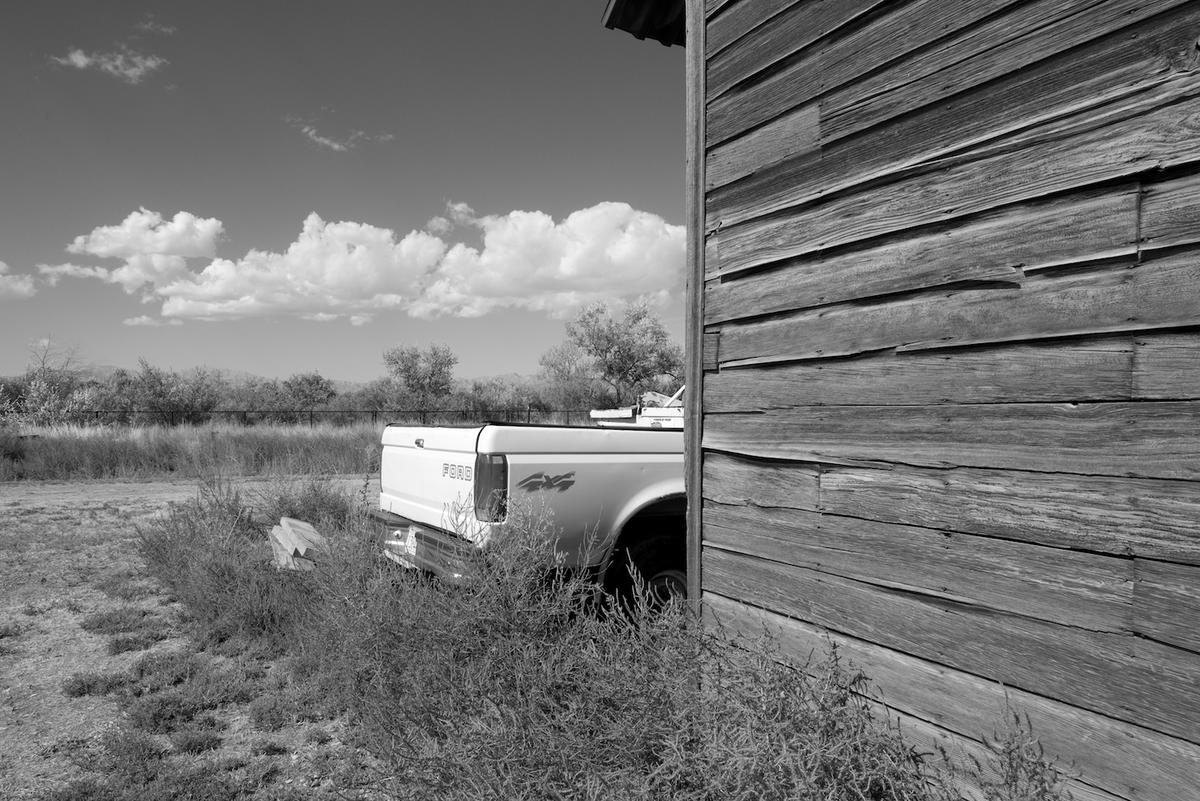 By repeating part of what was in the vertical we have no choice but to pay attention to this part as, in effect, this is a crop. Minor White was known for finding the picture in the picture. It was his way of telling students to move in and "essentialize" the picture.  I learned to do this in my own work with a fixed lens camera photographing a series in Newtown, CT (take a look at frames 19-24 here). I like the plane created from the side of the building on the right and then sliding along the back of the truck. The wide lens, held level here, makes for what I call a "fast "picture when taken out of being parallel to the subject. All that convergence on the right and then extending to the back of the truck sweeps you through the picture in an almost accelerating nature. Finally, you can't see what else is on the truck unless you move in very close and if you're reading this blog on your smart phone you can hardly see anything, so I'll show you: 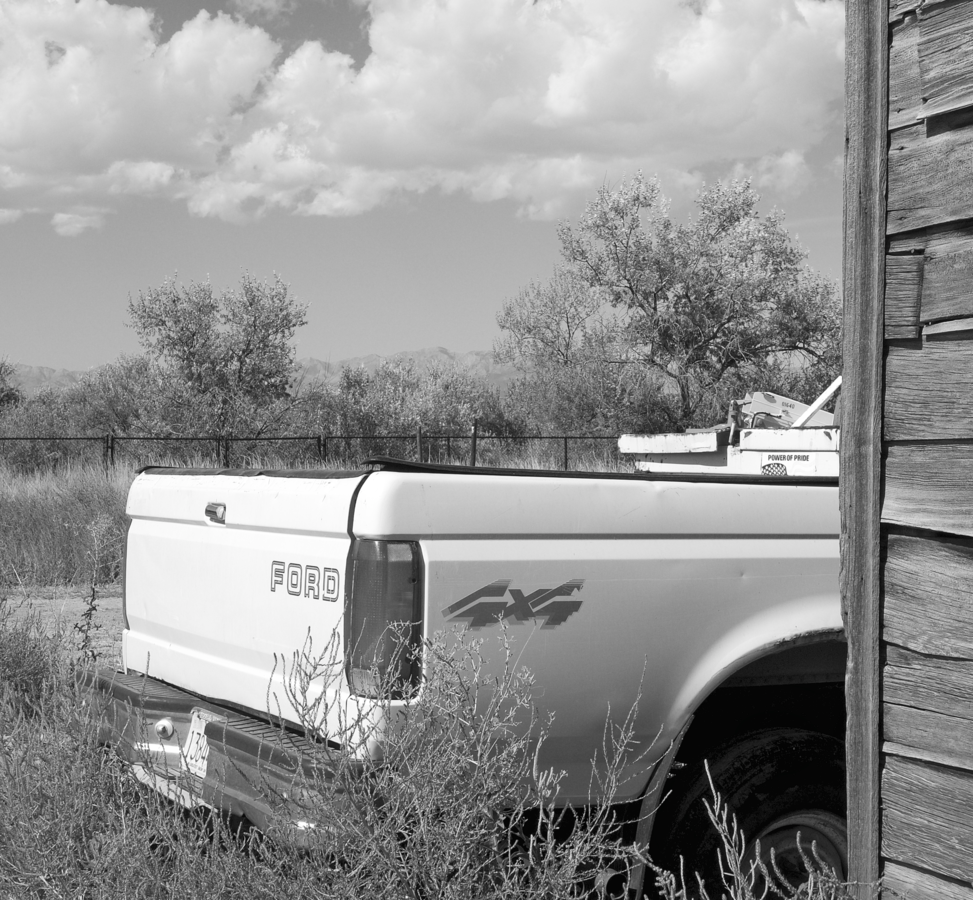 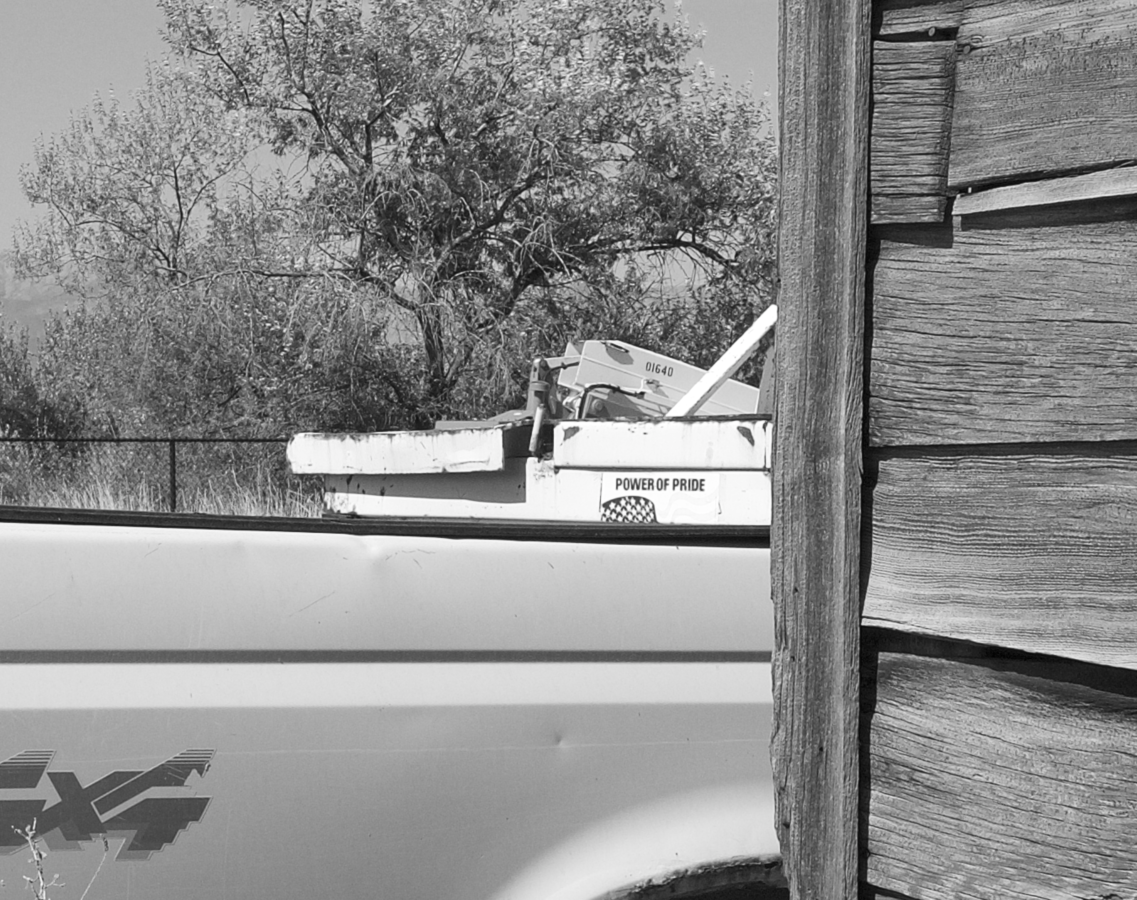 I like the "Power of Pride" on the truck. Presumably it indicates pride in the USA. I searched for it and found it comes from a bumper sticker that looked like this:

This photograph also hints at the greater world outside of this small park as, screened by a row of trees, you can see a mountain range off in the distance with clouds hovering over it all like an umbrella.

So here we are, back in "pairs" again and we are also now in the center and core of the series.

Next up is another pairing and I used a device familiar to many of you, shooting and then turning 180 degrees to shoot again. 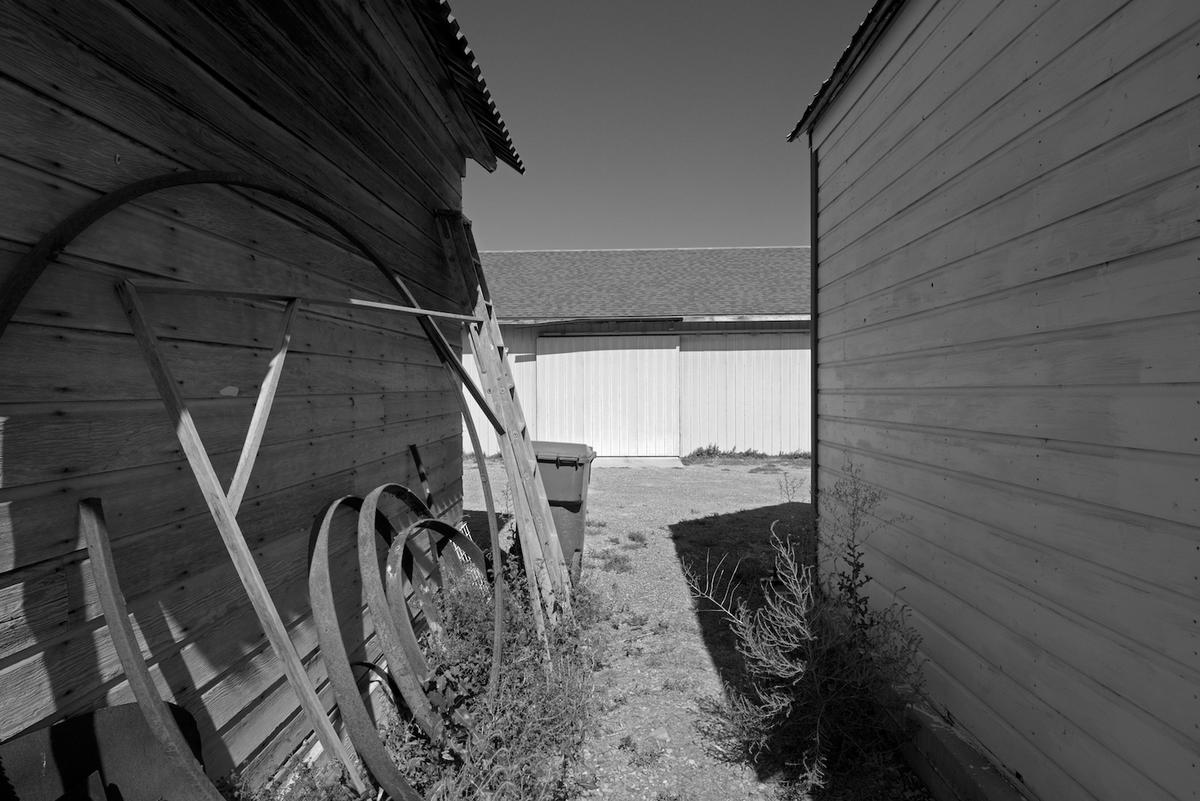 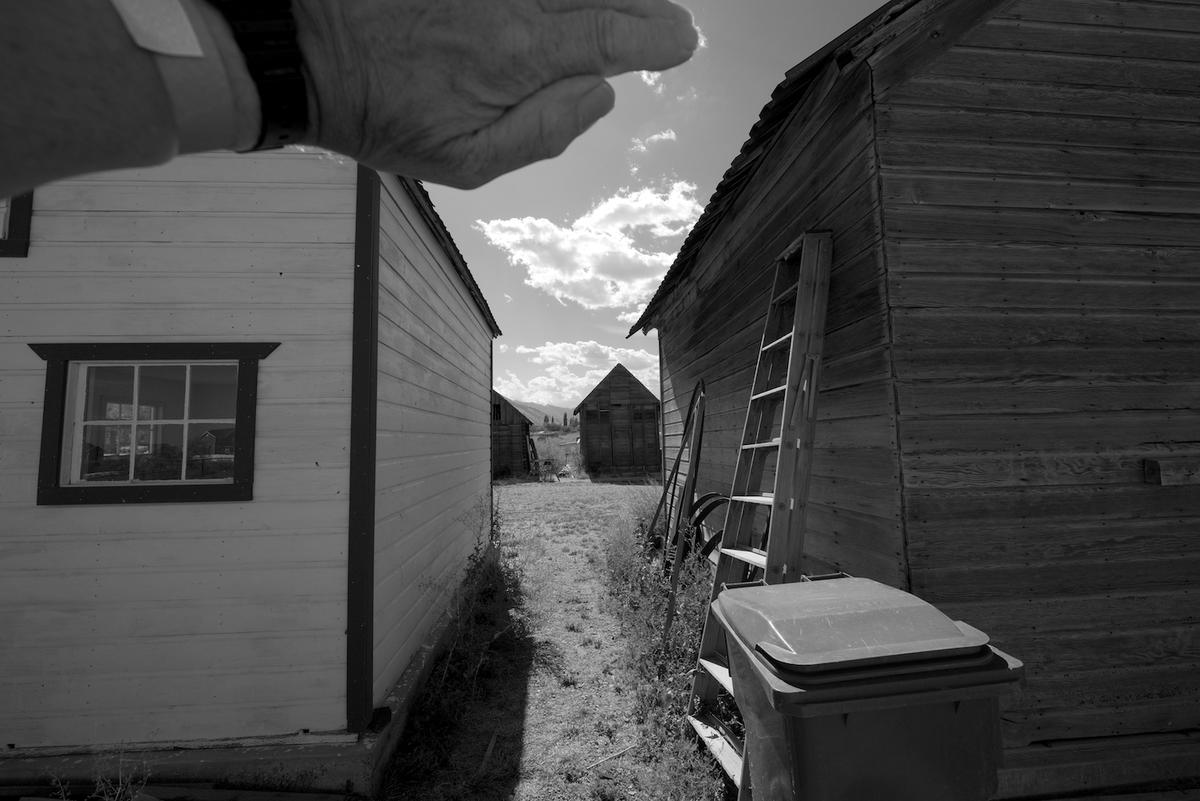 With first the sun at my back and then turning to photograph directly into it.

I recognize that among those of you that are purists there is no way you'd allow your  hand to be in the picture but let's be clear about who made those rules. Among  more conservative artists there are rules, I know, but really, in this day and age doesn't that sound a little ridiculous that you can't do something? These rules are more like long standing traditions. I think of Ansel Adams standing next to his 8 x 10 view camera making one of his iconic photographs. He might throw his hand up there to shield the lens from the sun so it wouldn't flare but he would make damn sure it was never seen in the photograph.  And that's fine, for photography was in a very different place then, in the 1930's and 40's, but that isn't far from being a 100 years ago, a very long time in this medium.

And let's be clear, I am in no way a documentarian. And this was an essential picture in the series.Why? Because of the path through to the world at large way back there in the frame. This is the only frame in the series where I allow you to see out with clarity and it is remarkable back there: 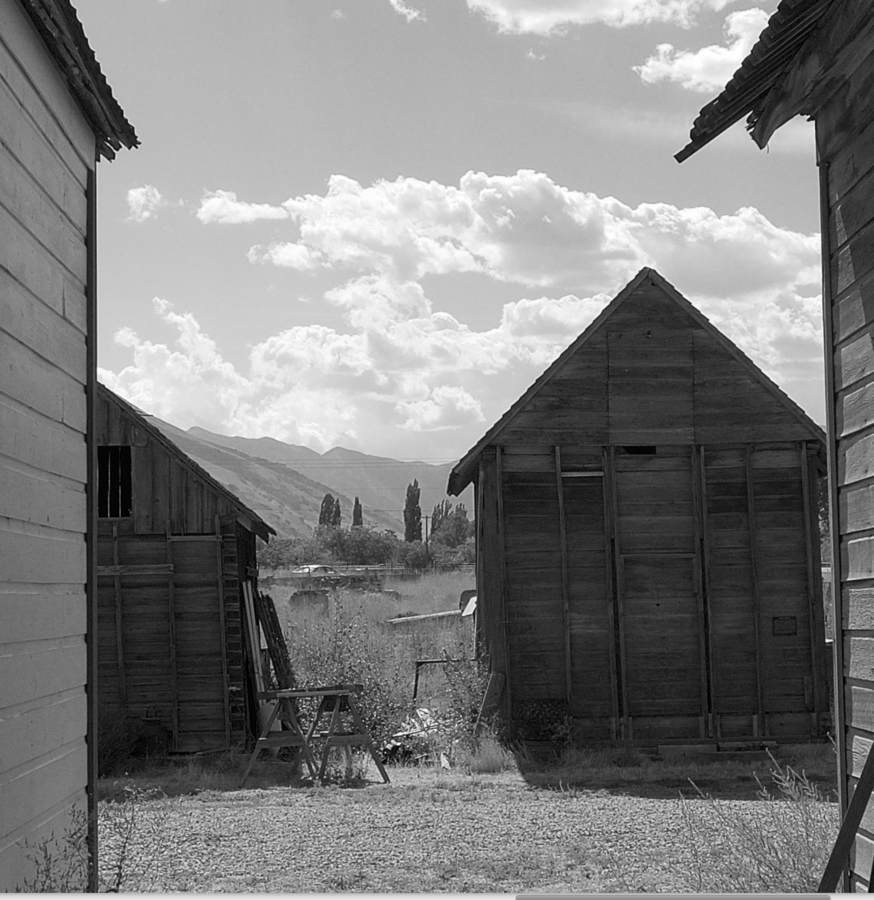 with layered content in the field to work your way through and mountains in the very background that give you a sense of the scale of the place. This is the land, after all, where this is: Great Salt Lake, 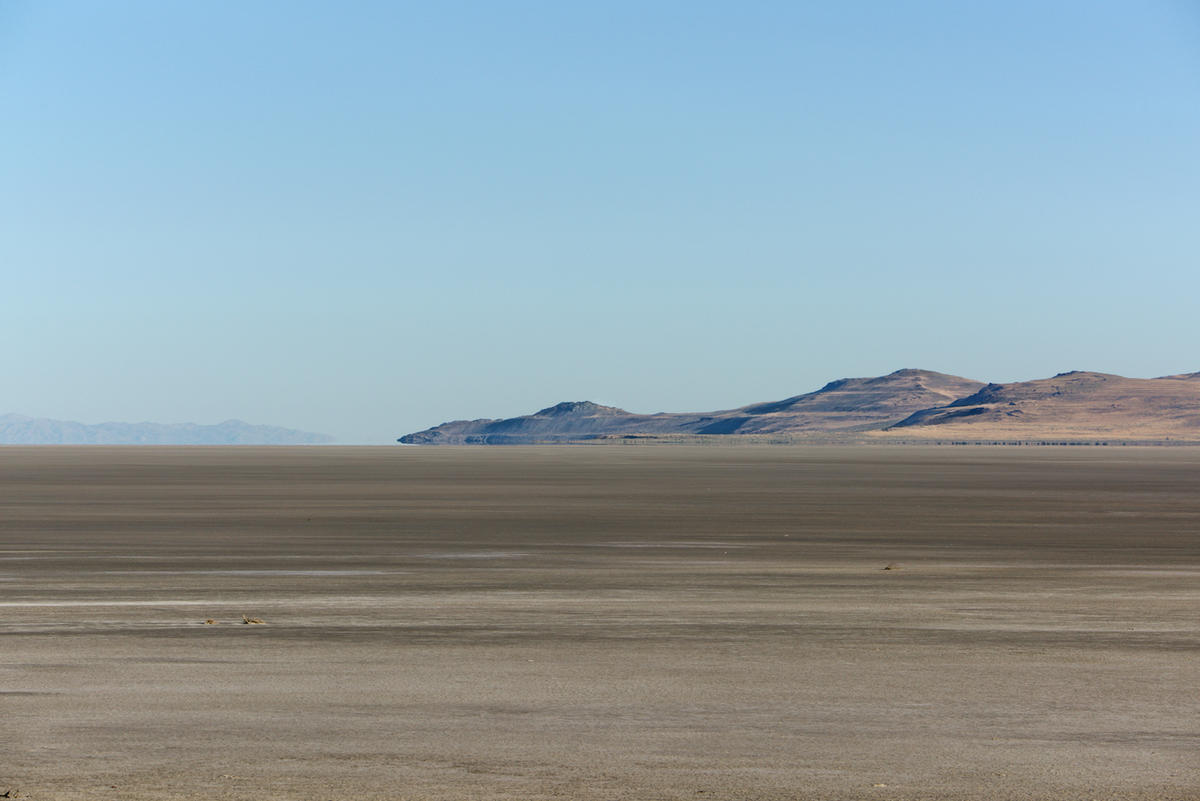 which was literally less than a mile from where I was standing at the Benson Grist Mill.

By the way, look at the shadowed barns on either side. See how they aren't totally black? This is simply amazing and attributable to something called "dynamic range" which is the ability to hold detail at each end of the tonal scale in something so very contrasty as this. This degree of dynamic range is new to photography in the past several years and yes, it is a digital thing. It is next to impossible for film to do this.

So, where are we going from here? To this pair: 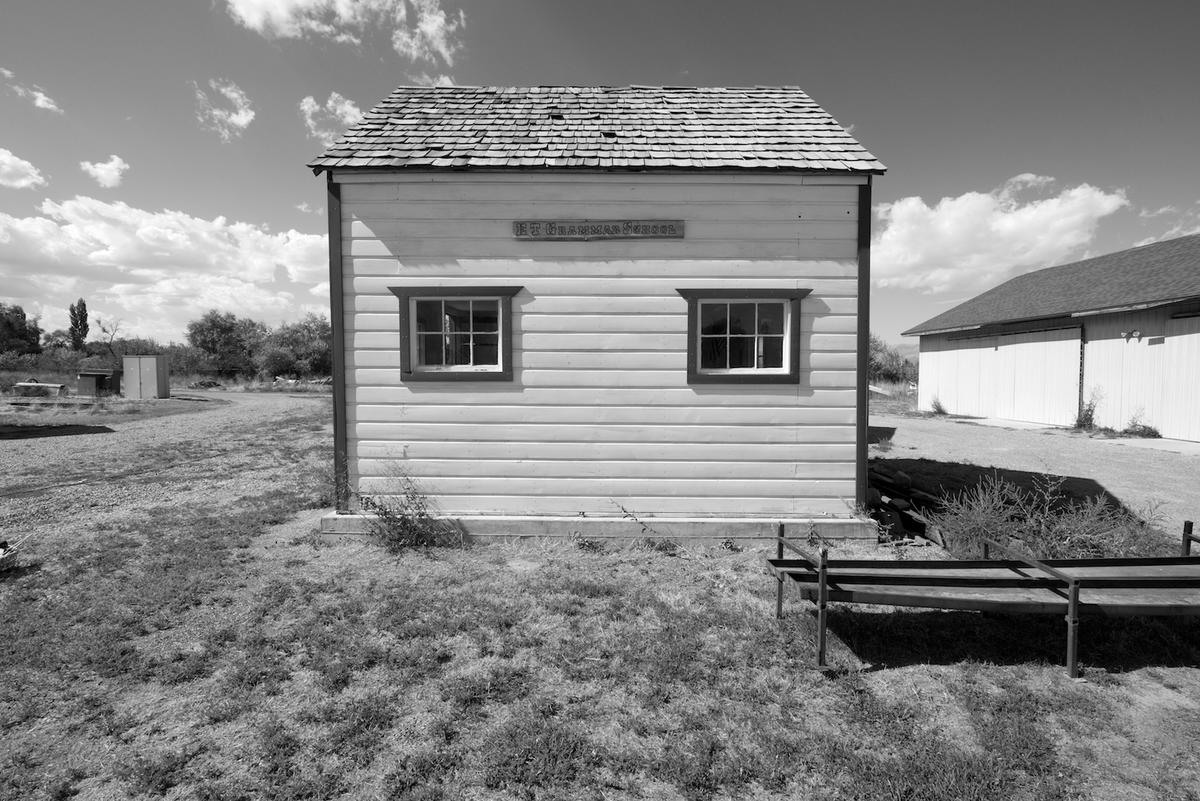 which moves us around to the side of one of the small buildings we've just seen as alleys and that is obscuring the others, and to here: 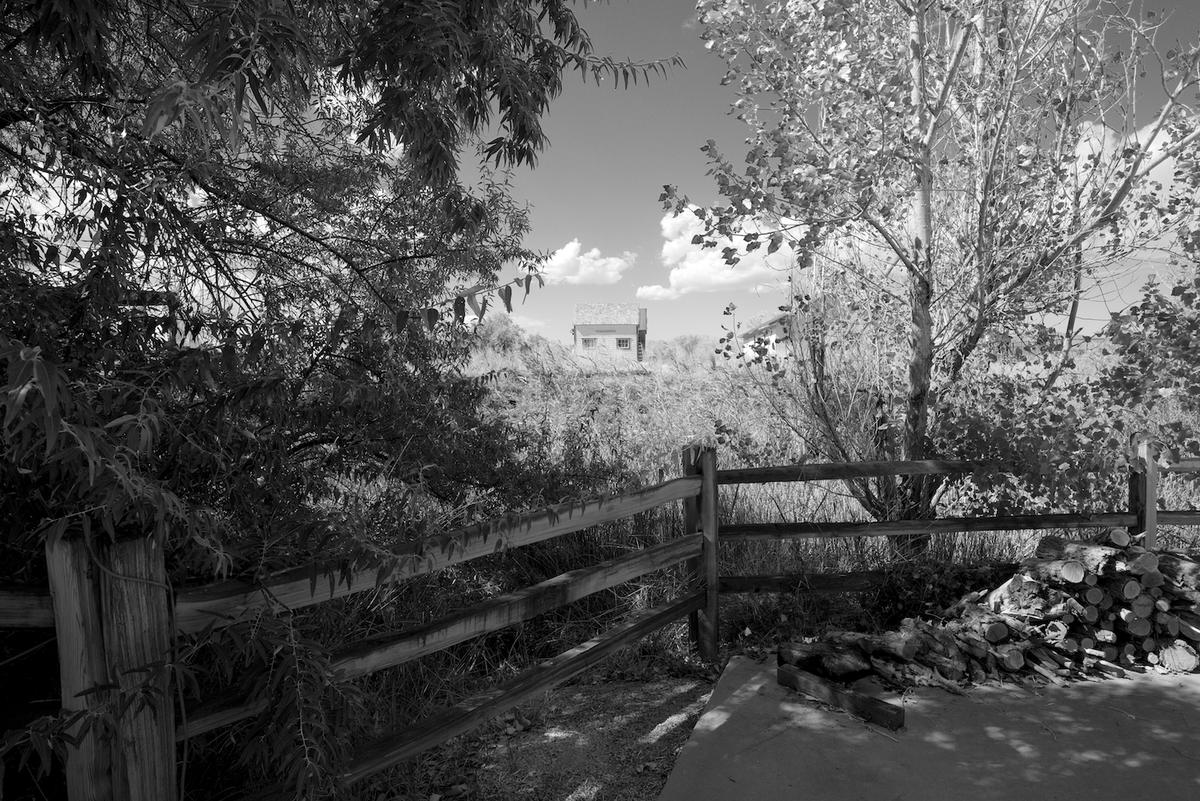 which brings us back very fast across the bridge and leaves those previous pictures behind. We are now placed to turn another 180 degrees to see what lies ahead of us, the final chapter in this little novella.  Forgive me, but this is a way of paying respect to where we've just been and saying goodbye to those pictures I just made. I don't do this often but felt it was warranted here, for the previous two pairs were the core of the series, the primary reason we are spending so much time on these pictures and why I worked on them and printed them over a two week period.

Now that we've moved on and are away from those, where do you suppose we're headed? 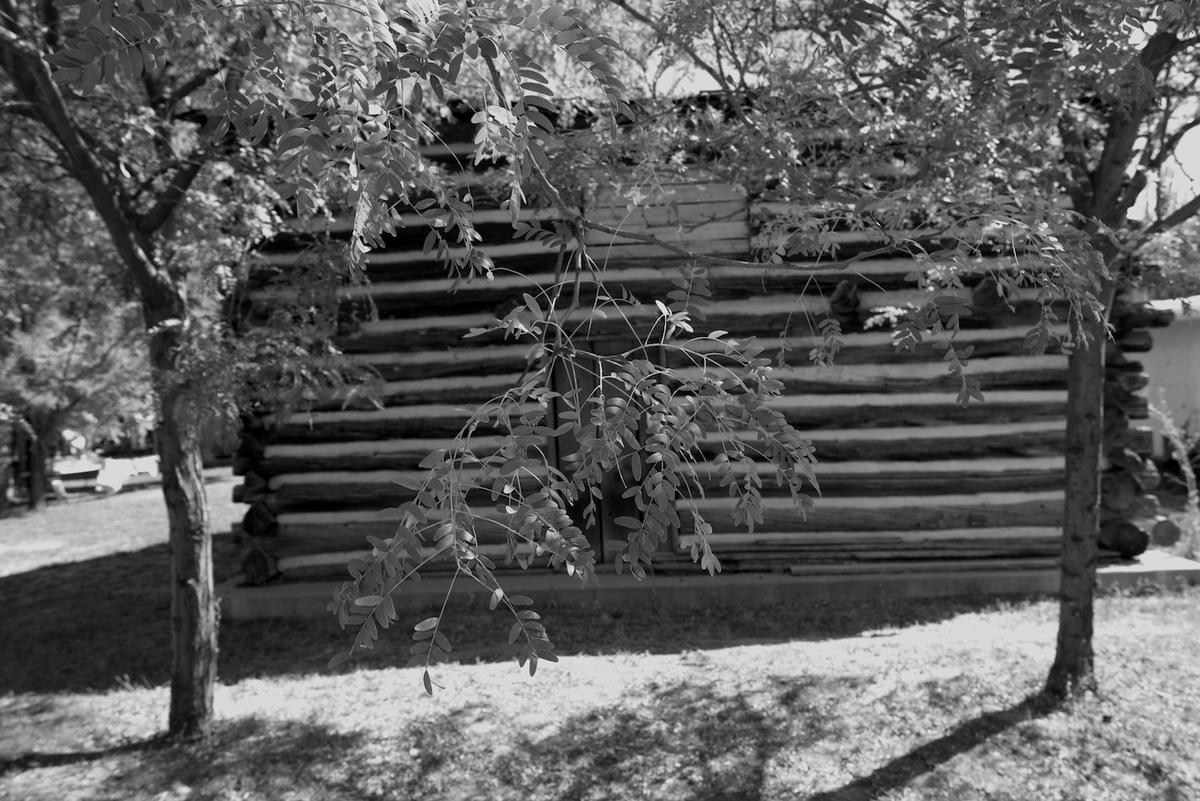 To something quite different and that looks, at first glance, hugely insignificant. But let's go closer: 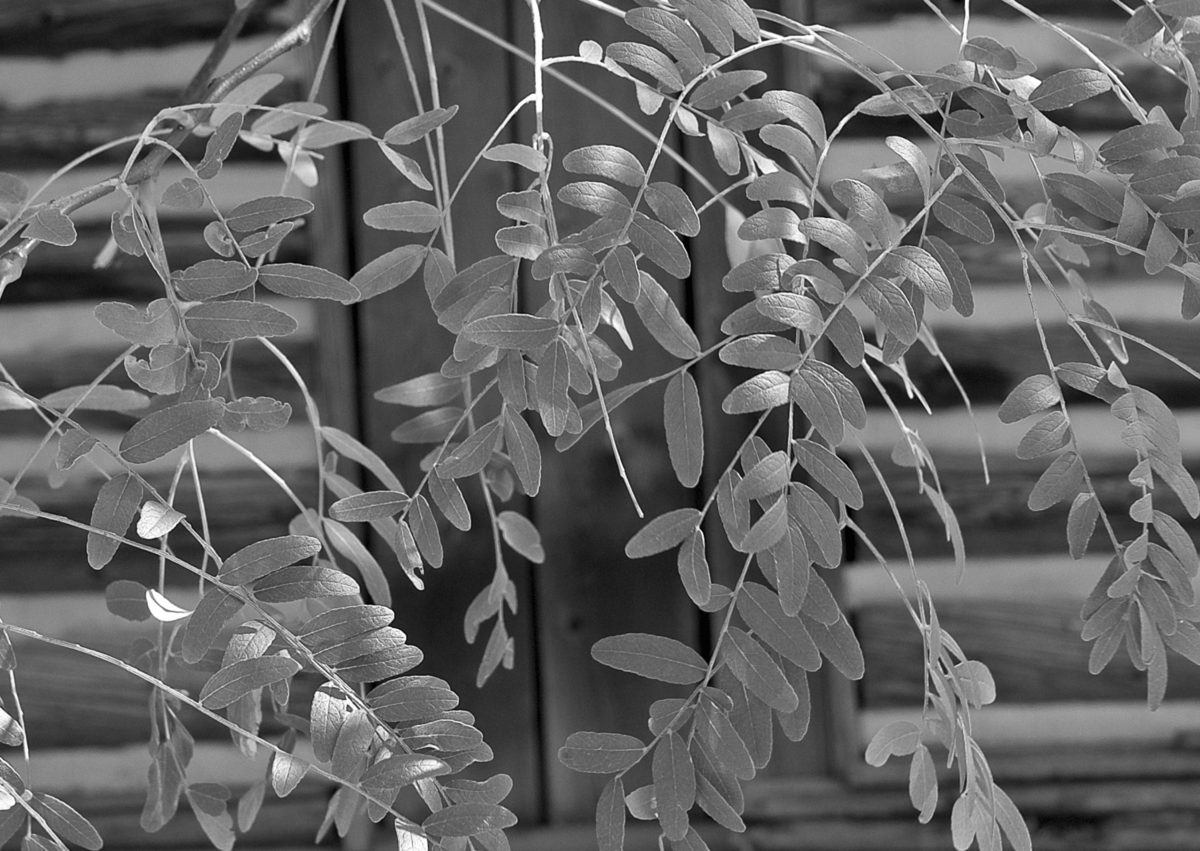 to this which was, quite simply, so exquisite it stopped me right in its tracks, these leaves, a little back lit and floating from a branch above that it took me right out of the pattern of working in one vein that was well established in the 15 pictures preceding this. To add to the exceptional nature of this picture, note how it is virtually all out of focus except for the the plane of the leaves floating in the foreground. There are times when I feel very lucky when I make pictures and this one seems to be thrown in there as a sort of bonus. Well, whatever power (the good luck god?) that may be at work here, it has my everlasting gratitude.

So we are wrapping up now and I must admit we are going to do it in an anticlimactic manner. First here, the second to the last: 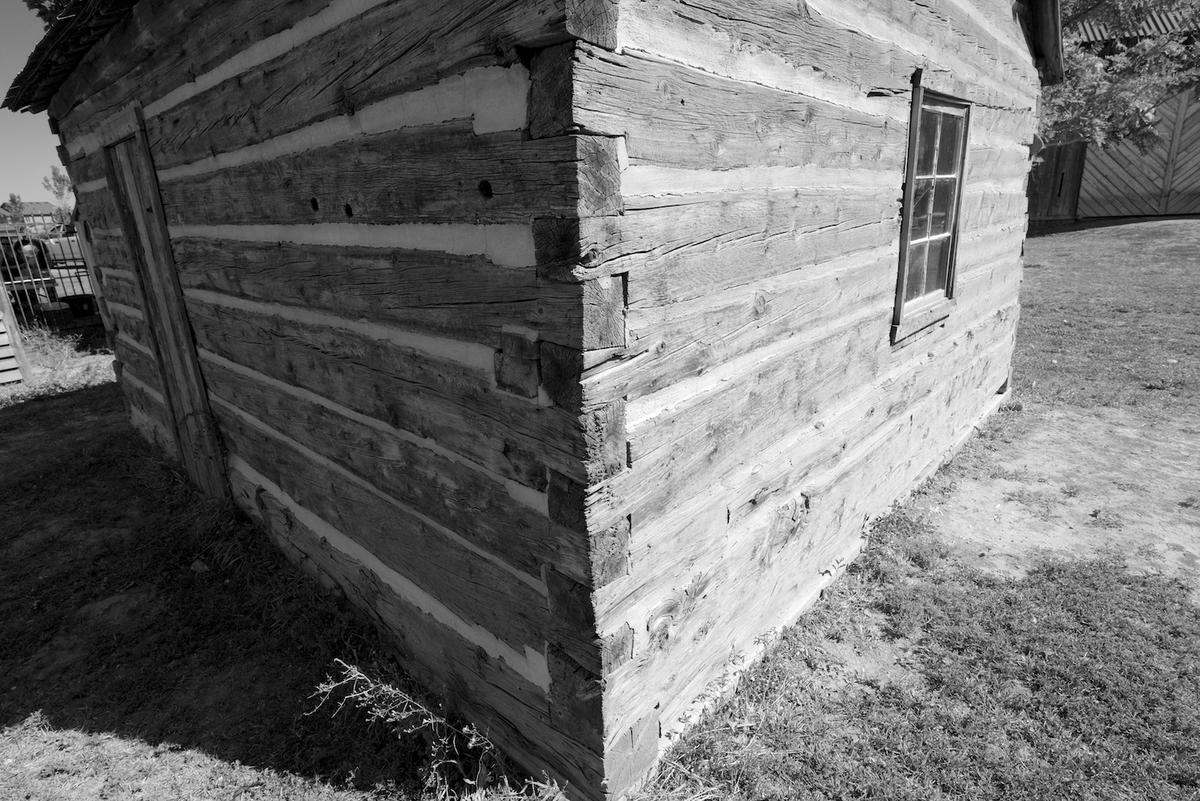 which returns us to our second and third frames hinting at something on one edge and then leading us to that subject, this time sliding to the right verses the left as before: 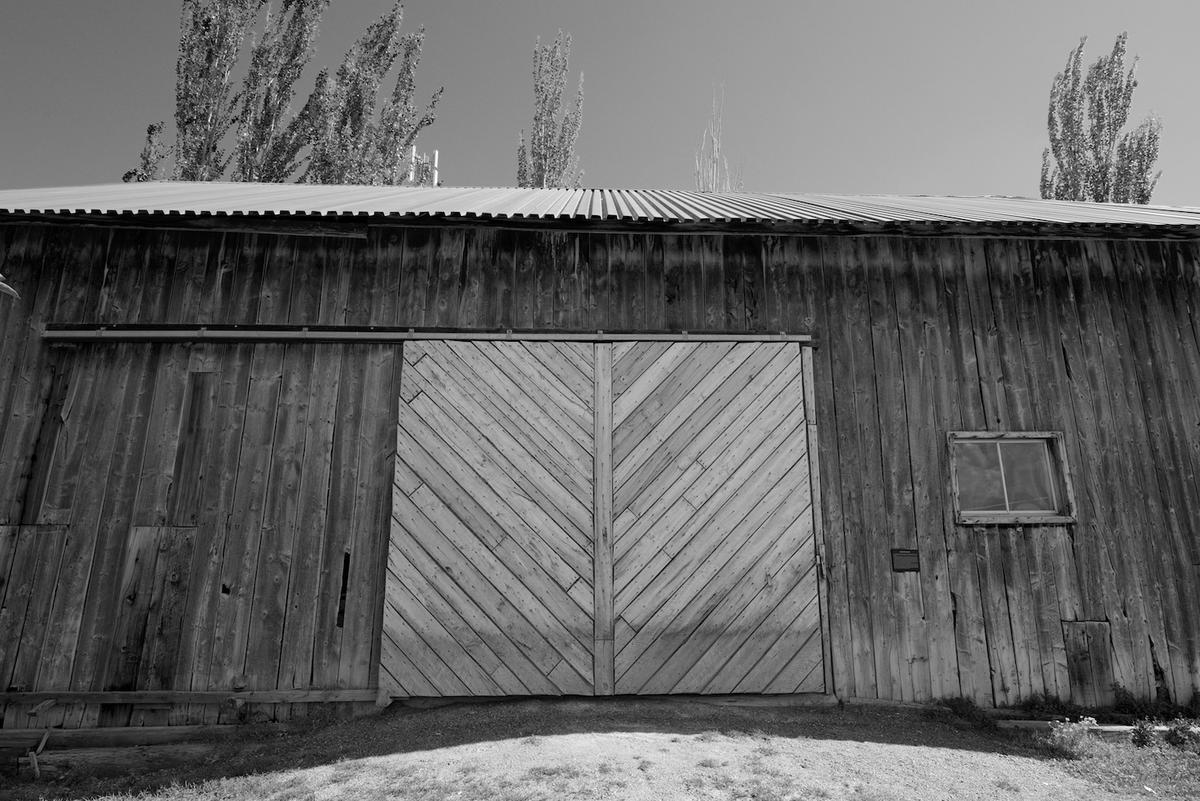 which is this last one and ending with the concept of coming around full circle prevailing as you can see the small cel tower or antenna poking through above the roof on the left. That's the same one we saw first in number four. Also this brings us back to the present due to its roof being modern and the sliding doors looking newer as well. Time has been been skewed a little in this series as there have been very few references or keys to where we are in time and that was intentional. Very often I'll include a present day car or something else to base a series in the "now" but that kind of device didn't seem appropriate here. The photographs being black and white adds to that as well, I think.

I do believe the last three function as an addendum, rather than going out with a  bang, but "it is what it is", that infuriating phrase that indicates that there is no more to work with.  I do find myself wondering if my physical condition (this was a few weeks before I had hip replacement surgery and I was working while in pain the whole time in Utah) played a part here, in that I was tired and sore after making the previous pictures.  When working to make a series I shoot about three or four times more frames than I end up using so I'd been at work a few hours already. Did I lose concentration ? Was I thinking about where I could get a beer, something to eat or just sitting down? I don't know, but it's possible.

So what's the point with these pictures? What is all this work saying? The answer is locked in each individual photograph and also in how they relate to each other. I would think there could be 17 different answers, one for each picture, or maybe more if you began to address and answer what happens in the spaces between prints in the sequence. I for one wouldn't begin to presume that I could tell you what the pictures are about or say. I feel it is for you to unlock their meaning for you personally. Using this vehicle of the blog I can share with you some of my intentions and write about some of the work I did to make them but I can't tell you what to take from the pictures.

My next to last point: I wrote in the first post about the grist mill pictures that I was working within norms.There is so much trickery and gimmicks used in picture making these days. And I am not averse to using technical aids when I feel it adds to pictures. Take a look at South Woods Farms (which are HDR's) and Baldwinville as examples. But it isn't always necessary, or perhaps even seldom needed. A group of photographs such as these should rely upon the seeing, not technical wizardry used to make them. And my very last point. Earlier I used the concept of playing against a chord or a given key to make when arriving at the harmony more meaningful. That is called counterpoint. That's true here even though photographs aren't music. I would caution you against trying to find the "pictures that work" or that are keepers when looking at my series photographs and to think about the body of work as a whole. Of course, you and I both will have a favorite or two but we shouldn't think of those as standing on their own because they need the ones that precede it and follow it as well.

Once again, you may see these unusual, remarkable, exceptional and beautiful prints (not very modest, but I believe they are) at 555 Gallery practically on demand.  Just ask. For a sense of how they work together without all these words you may see them on the gallery page of this site as well here.

Thank you for looking and reading.