This may be one of those posts where you think to yourself, "duh, everybody knows that", but I'll take that chance.

I've been thinking about the key differences in the creative processes of being a writer versus being a photographer. This may have something to do with the fact that I am co-teaching with an author this spring at Penland in North Carolina. The two week class is called Word & Image and is offered in an effort to help photographers write better and writers photograph better. My colleague in the class is none other than Christopher Benfey, who has an amazing list of published works to his credit. Professor Benfey is the Andrew W. Mellon Professor of English at Mt. Holyoke College in Massachusetts (Mt. Holyoke College website).

Clearly there are many scenarios that work here but let's go through these two hypotheticals:

Imagine this: you research a topic, you write a draft, edit it, refine it, polish it, perhaps show it to others you respect for feedback, shape it some more, submit it,   are rejected by some publishers but perhaps succeed with one or two, pique an editor's interest, and your work gets published to critical acclaim.

You research a topic, you begin the project, perhaps you photograph it over time, perhaps it all happens in an hour or a day, you work on the imagery in post production, refine it, polish it, perhaps show it to others you respect for feedback, shape it some, show it to a gallery or a museum (if you're well placed enough that they will meet with you), pique their interest, they agree to show it, and perhaps a year or two later it hangs on a wall, viewed by the public. The work is reviewed with high praise by the local press.

Not so dissimilar, right? But there is one major difference that comes to mind, besides the obvious. With a writer, what you read on screen or in pages in a book is directly from the writer who wrote it. There's nothing secondary that dilutes the work. It comes direct from the origin. Photography, and much art these days, is largely secondary in its presentation, run through a large number of filters before it gets to being prints hanging on a musuem wall. The "filters" are things like websites, on line galleries, Facebook or Instagram, printed cards, digital slide shows, iPads, smart phones, email blasts, blogs and on and on. These can happen with published written works too, but, although there are secondary delivery mechanisms, there is no filter between the author's work and you the reader whatsoever. Written work does not get diluted, skewed, distorted, altered or mangled at all. You are still connected to the author in a direct line with no noise or static between you and him/ her. I know you're thinking , "What about the editor?" who can transform the author's original intentions into something else entirely. This is true, of course, but I  believe you get my meaning.

Photography in its earlier analog version was often far more direct. Much like painting, it was made by the artist. The print you saw on display was handled and made by the artist himself/herself. There was this concept of the original that had value, the print had added weight and meaning as it had been made by the "master". Think Steiglitz or Walker Evens or Edward Curtis here.

This happens with written works too, where the manuscript or the original hand written copy of a book takes on a value of its own, as an object. Think the first draft of Hemingway's For Whom the Bell Tolls, or an early manuscript from William Shakespeare. 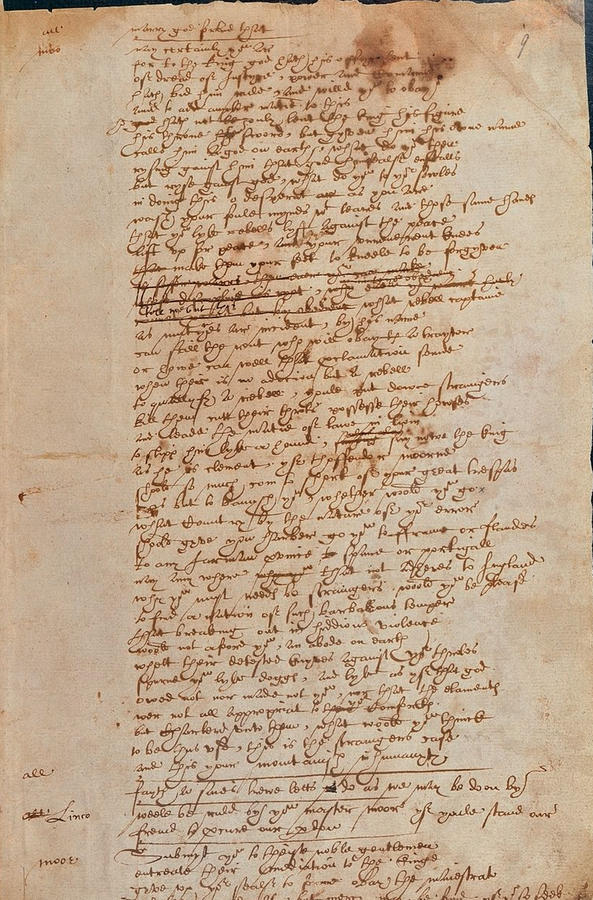 This is thought to have been handwritten by Shakespeare (source Wikepedia).

But, for the most part, written work comes through loud and clear from the mind of the author that wrote it, simple enough. As an artist I prefer to make my work as much from me and under my control as I can. The print on the wall, be it analog from earlier vintage work or today from an inkjet printer is a print I made, handled by its edges and most often framed as well. But think about what a contemporary print has gone through to get it there: all those millions of  1's and 0's, the binary code, being pushed around at the molecular level to make some semblance of something that looks like a photograph with a computer with a display screen, with ink and with a piezoelectric head sliding back and forth spraying microspic droplets of ink onto a piece of paper or plastic.